Blenders equipped with a heating element are great for soup making but outside of cold weather months, can be relegated to a cupboard. However, the Tefal BL962B40 Ultrablend Cook Blender resists such treatment by being a multitasking wonder. Sure, it’ll whisk you up a steaming hot, soul-soothing batch of broth but it’ll also cook anything else: fruit, vegetables and even meat. This means it can be your year-round worktop companion, making everything from sauces, compotes and baby food, to milkshakes, smoothies and more. And while you might not be able to pop it in the dishwasher, its auto cleaning function makes for hassle-free washing up.

The only clue to the Ultrablend Cook’s identity as more than a mere smoothie maker is its crowded control panel. Here is where you’ll find a light and icon for each auto programme: five hot (soup, compote, coulis, hot sauce and multigrain milk) and three cold (ice crush, green smoothie, milkshake), which are scrolled through using the mode button. Manual functions are also here and include pulse, which doubles as the cleaning button, plus and minus for toggling manual cooking time (5-90 mins) and a temperature button for selecting heat between 40-100C. Another button controls the speed of manual blending and can be set for up to three minutes. While there’s a lot going on, the plus of this seamless design is that splashes can be easily wiped away. 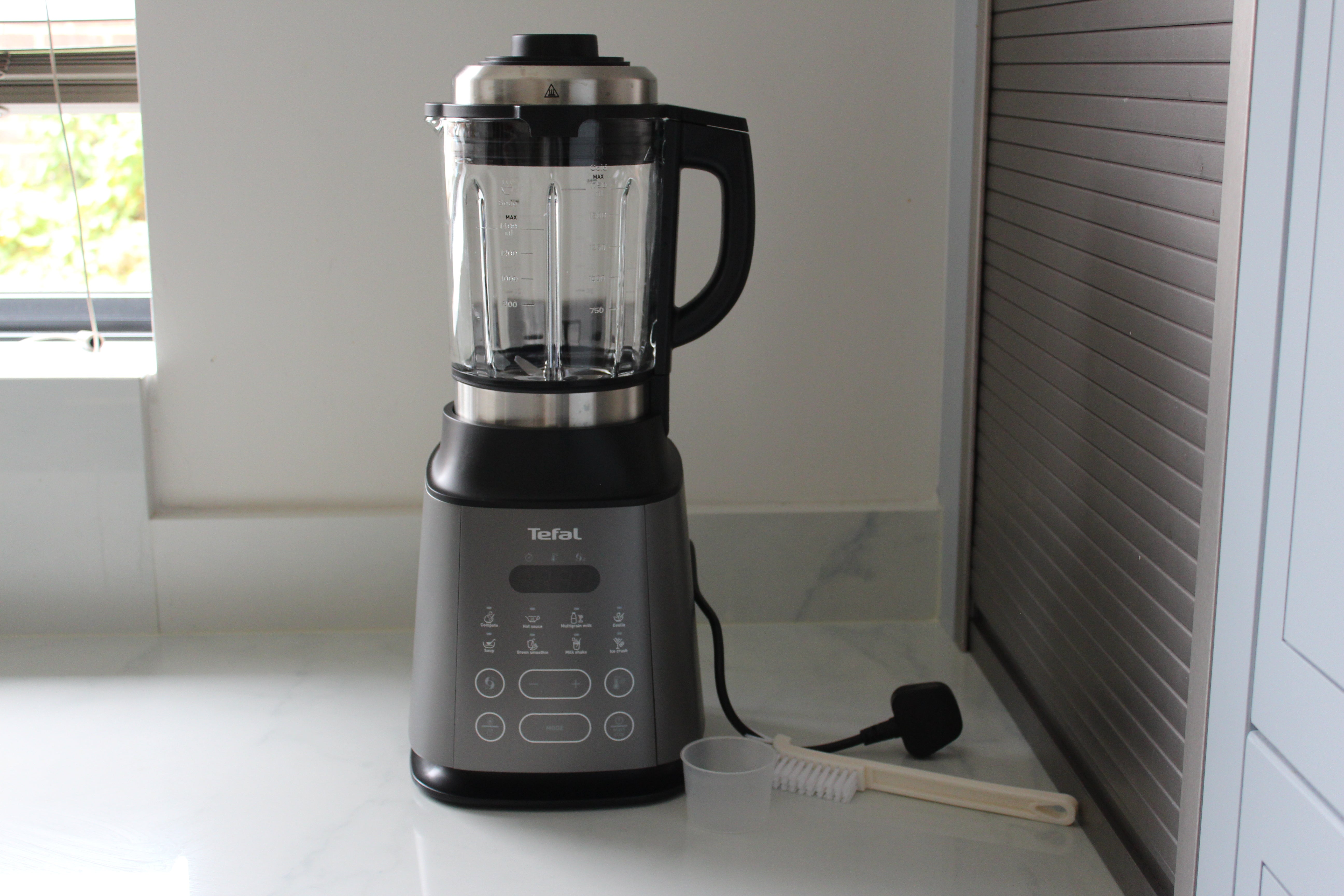 The blender itself feels robust – the glass jug is heavy but well constructed and resistant to sudden changes in temperature. The blender has six Tripl’Ax Pro blades driven by a powerful 1300W motor. Rather than twisting in place, the jug drops squarely onto the base, its handle fitting securely into a slot. The jug’s lid twists to lock and features a vented section so steam can escape as it cooks.

Tefal BL962B40 Ultrablend Cook Blender – What’s it like to use?

Given the potential, it was disappointing to find that the blender only came with one brief recipe for each programme. I started by using it as a standard blender on the green smoothie programme. This required repeat pressing of the mode button, which wasn’t very responsive. It couldn’t be held down to scroll and didn’t respond to light presses. 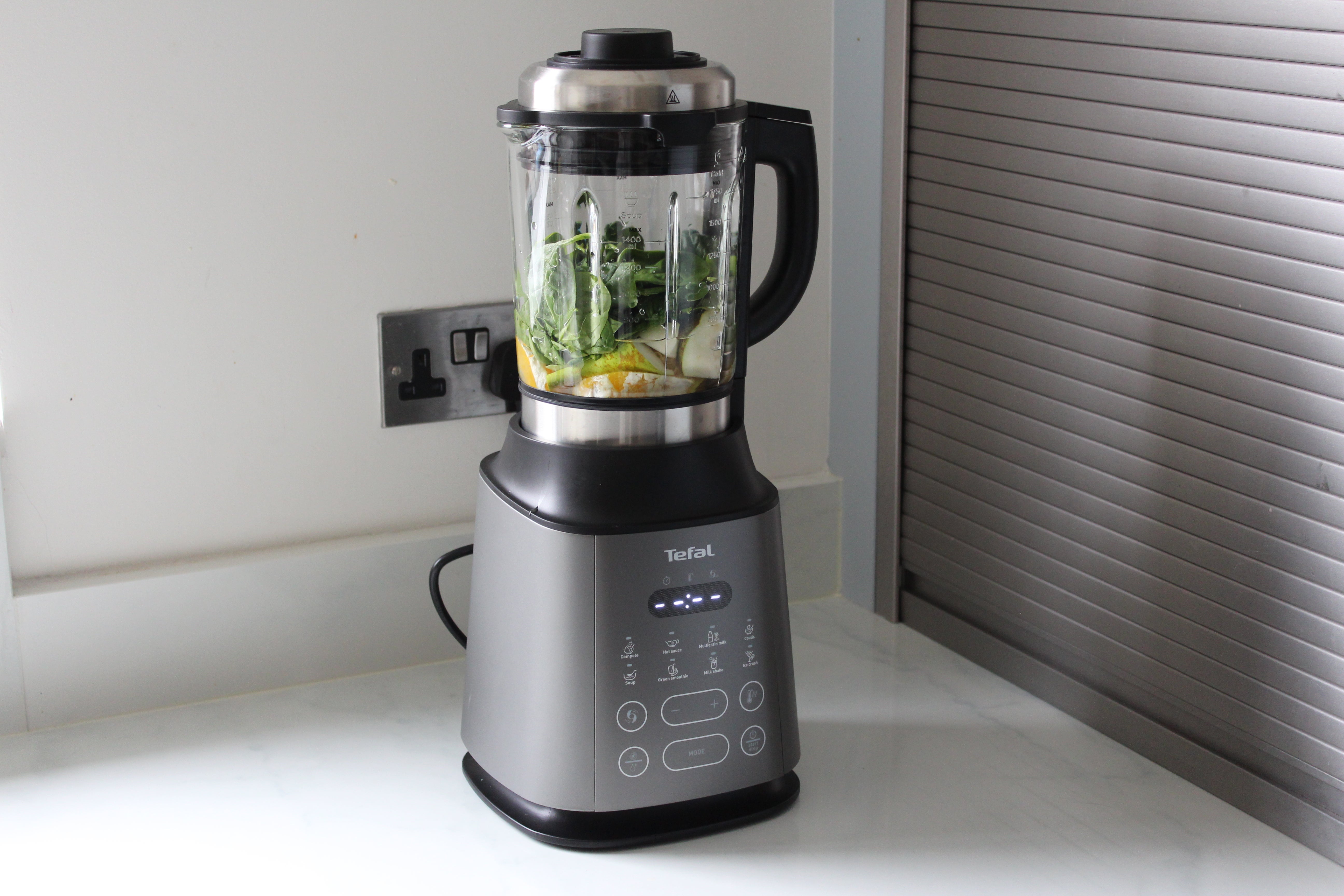 There wasn’t any guidance as to what order to put ingredients in for the smoothie. I added a mixture of spinach, water and soft and fibrous fruit and started the programme. This lasted for about 1m 20s, the speed slowly ramping up, with a large digital countdown showing the time remaining. After it had finished, the smoothie was frothy and evenly coloured but one lump of pineapple had escaped the vortex. 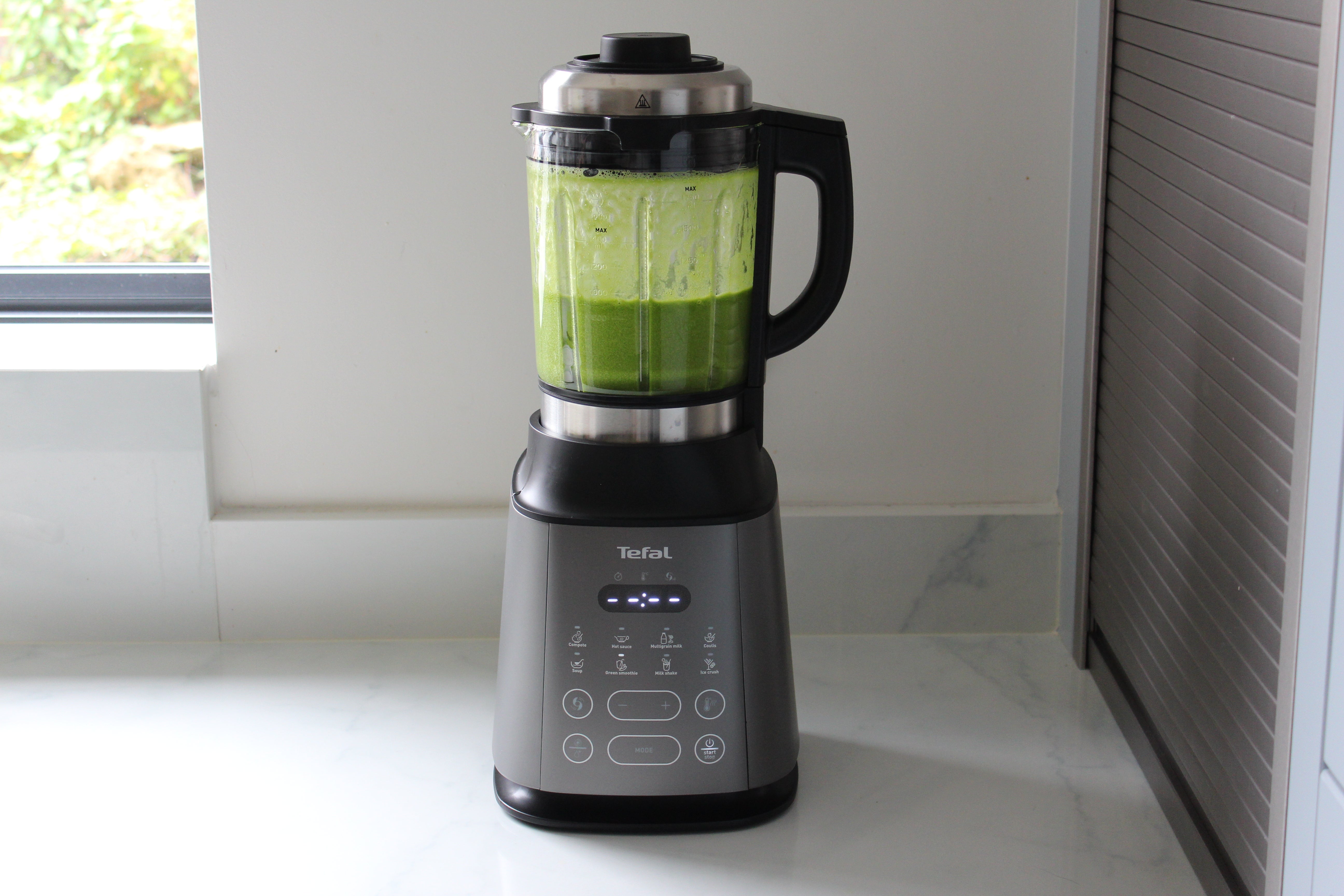 I used the cleaning function after – this involved adding water and a drop of washing-up liquid before holding the pulse button for around 30 seconds (although there was no count up to show how long it had been working). This feature would have been better as a push and walk away function but did an excellent job. Following a quick rinse, the jug was perfectly clean. Next, I made soup by adding vegetables and stock to the jug. Again, some guidance as to what order to place the food in would have been useful. The programme time was 30 minutes, which would be long for some recipes, meaning these may be easier to cook using the manual mode. One handy element of the hot programmes was that the timer didn’t start to countdown until the blender had preheated to the correct temperature. The soup programme took around 10 minutes to preheat as the jug was filled to the maximum of 1.4-litres. Once the liquid had boiled (which was easily visible), the soup simmered for the rest of the time and began to blend at a medium speed with just over a minute left on the timer. As it did so, some steam was emitted from the lid. 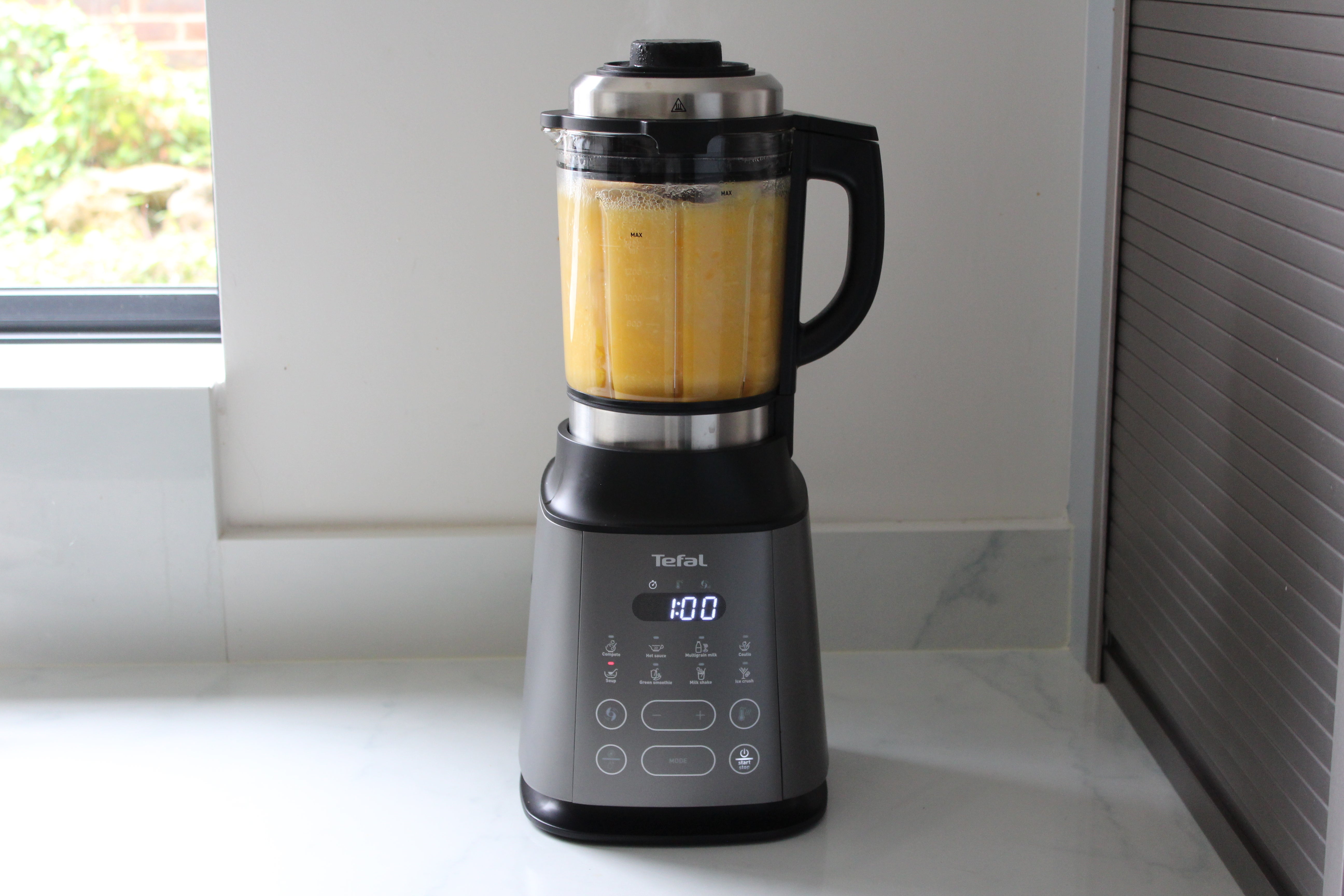 The glass jug was hot to the touch but the handle was cool enough to lift without gloves. The soup itself was thick and smooth. I cleaned the jug using the brush provided, which was useful for washing around the blades.

The blender’s multigrain milk programme appeared to be best for making nut milks. Adding water and almonds to the jug, I selected this option, which showed a cooking time of 20 minutes. 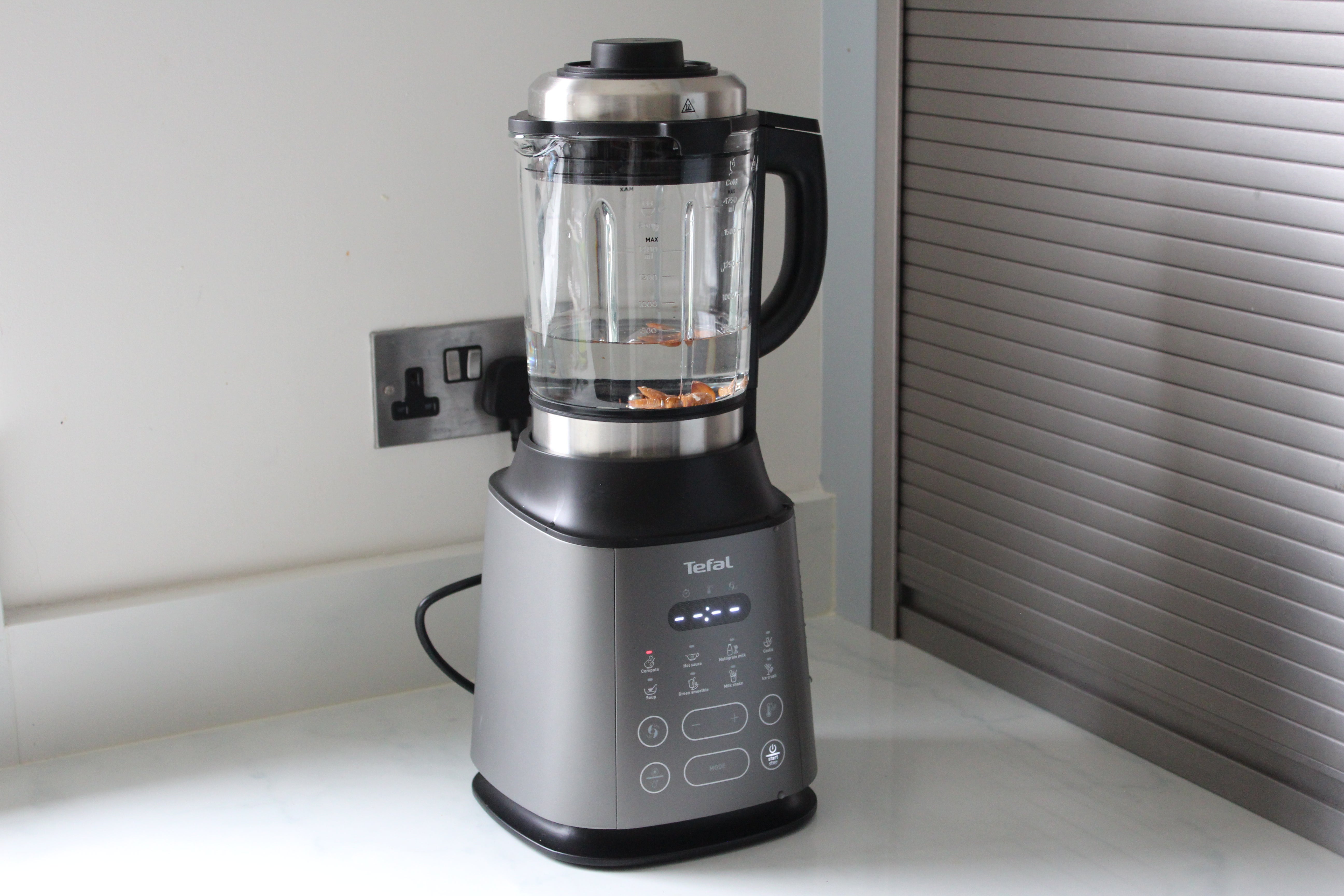 This programme took just over five minutes to preheat and was a mixture of heating and bursts of blitzing. The almond milk was very frothy and mostly smooth, although some nut particles remained. However, these were easily strained out. Cleaning the particles away was trickier – the auto clean didn’t shift the bits stuck to the jug’s side and these had to be scrubbed away.

Finally, I made apple sauce using the compote programme. Adding pieces of apple and a small amount of water to the jug, it steamed these on a gentle heat for 15 minutes after a minute of preheating. The last 30 seconds of the programme pulsed the stewed fruit into a smooth sauce. This was difficult to remove from the jar with a spatula. No parts of the blender were dishwasher safe but the auto clean with the brush removed any mess. However, the jug was heavy to hold while washing.

There’s a lot to like about the Tefal BL962B40 Ultrablend Cook Blender – it feels as if every feature has been thought-out and common problems nixed. It’s far more convenient than making soup and stewing food on the hob before blitzing, and efficient – it didn’t burn anything during testing. Quick meals plus easy cleaning are wins for time-poor households but you’d have to use it regularly to justify the price. More recipe ideas and a slim spatula for scraping around the blades would be useful.

From hot soup to cold smoothies, this is a blender for all seasons.