What is the Tefal SlimForce with Sauce Attachment?

The Tefal SlimForce is a versatile stick blender with a plethora of attachments. While two of the attachments may be instantly familiar, its third, a mayonnaise blender foot, gives it a new dimension. It’s designed to emulsify mayonnaise, tartars, remoulades and other sauces in seconds, without all the slow drizzling and vigorous whisking required when made by hand. The mayonnaise attachment even comes with its own recipe book and a special beaker.

Also included is a whisk attachment, a standard blender foot and larger beaker for everyday blending and whipping. 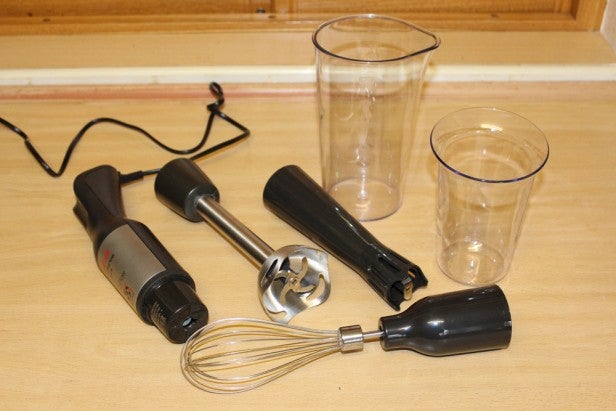 The shape of the SlimForce doesn’t differ greatly from a standard stick blender, but it’s noticeably ergonomic. Its handle slopes back slightly, fitting snugly in the hand, and it’s covered in a tactile soft-touch material as opposed to the hard plastic of most. The two speed modes – Standard (14,500rpm) and Turbo (16,000rpm) – are easily controlled by a thumb on the top of the unit. Further down, its attachments are simple to connect and disconnect, pushing and twisting into place securely.

At 650g, it’s reasonably substantial for a stick blender, but this gives it a satisfyingly robust feel and it’s stable during use. Well proportioned, it’s balanced enough to stand up on either of its ‘feet’ when not blending and its attachments are similarly sturdy. The blender foot is made from stainless steel and has a generous splashguard concealing four blades – two inner to help move food, two outer to mix – and a wobble-free, consistent spin on the whisk, even when in Turbo mode. The Mayonnaise blender is primarily made from plastic, but conceals a pair of compact blades that quickly emulsify sauces, while an inner ring rotates to help aerate.

Tefal SlimForce with Sauce Attachment – What’s it like to use?

Getting started with the SlimForce is pretty straightforward. While the recipe booklet is geared around sauces – including ideas for ketchup, garlic sauce, tzatziki and avocado dip – once you’ve experienced how easy it is to make them with the mayonnaise blender attachment, it’s likely to become the main focus of the appliance. It’s also equally good for soups, smoothies and whipping. 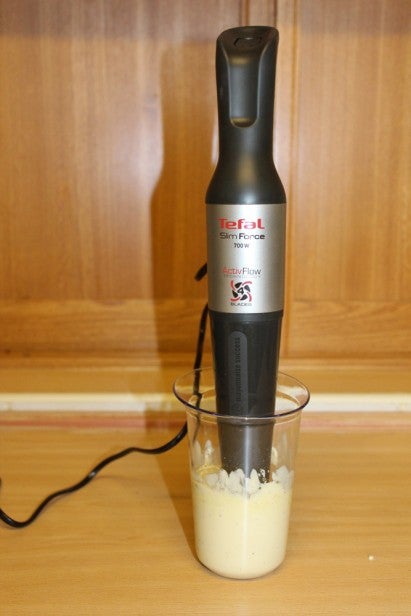 Basic mayonnaise can be made in less than 30 seconds by adding all the ingredients – egg yolk, vinegar, oil and pepper – to the dedicated beaker, then sinking the mayonnaise blender foot to the bottom of the beaker. It only takes a five- to ten-second blast with the SlimForce in Turbo mode to emulsify the sauce, then the attachment is slowly lifted out while it’s running – without splattering. If the sauce isn’t thick enough, the SlimForce can be used to give it a little extra blitzing to reach the right consistency.

Cleaning the mayo attachment is fuss-free – a quick rinse to wash off sauce residue, followed by either dishwashing or hand washing. The instructions also suggest a rinse regime while in use as an alternative, meaning you can carry on making sauces without dismantling it.

Smoothies take a little longer than using an upright blender and require more movement to incorporate all the ingredients, but they come together adequately. In Turbo mode, you’ll have to hold on tight, not just to the blender but also the beaker, as the SlimForce has a powerful suction effect if it makes contact with the bottom of the beaker.

After several minutes of use, the body of the SlimForce becomes warm, indicating that it’s better for small blending jobs and quick bursts, but it’s so powerful that it’s unlikely you’d need to use it for long periods of time.

While many of the sauces suggested in the recipe booklet could feasibly be made using a standard stick blender, where the SlimForce differs is its dedicated attachment and beaker that make the process simpler, as well as the supplied ideas and guidance. 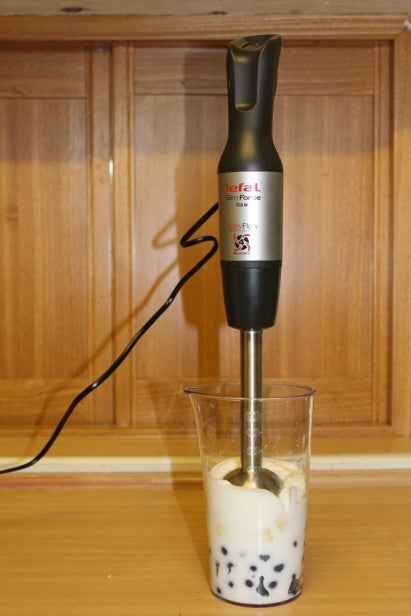 Should I buy the Tefal SlimForce with Sauce Attachment?

When it comes to sauces, the SlimForce is almost as good as having your own French chef in the kitchen. While a mayonnaise blender attachment seems gratuitous at first, it’s efficient and easy to use enough to charm its way into your regular cooking routine. Regular entertainers will especially reap its benefits with the chance to show off homemade mayonnaise recipes and sauces.

Its price might be comparable with other mid-market stick blenders, but its functions go above and beyond. A smart first-buy blender, as well as an extra trick up the sleeve of keen cooks.