The Tefal HB643140 Optichef hand blender is a hard-working kitchen gadget that you’ll be reaching for time and again.

What is the Tefal HB643140 Optichef hand blender ?

Hand blenders are ideal for everyday food prep, but they can lack power or leave your worktops covered with splatters. Designed with two super-sharp blades, and a bell-shaped head to minimise splashes, the Tefal HB643140 Optichef hand blender aims to avoid these common bugbears for quick and easy blending that’s mess and fuss-free.

Equipped with an unusually wide range of 20 speeds plus a one-button Turbo mode, it lends itself to pureeing, liquidising and emulsifying, while a mini-chopper means it can mince, blitz and shred too. The balloon whisk makes for a handy accessory, which comes with enough torque to beat egg whites to stiff peaks and effortlessly whip cream. 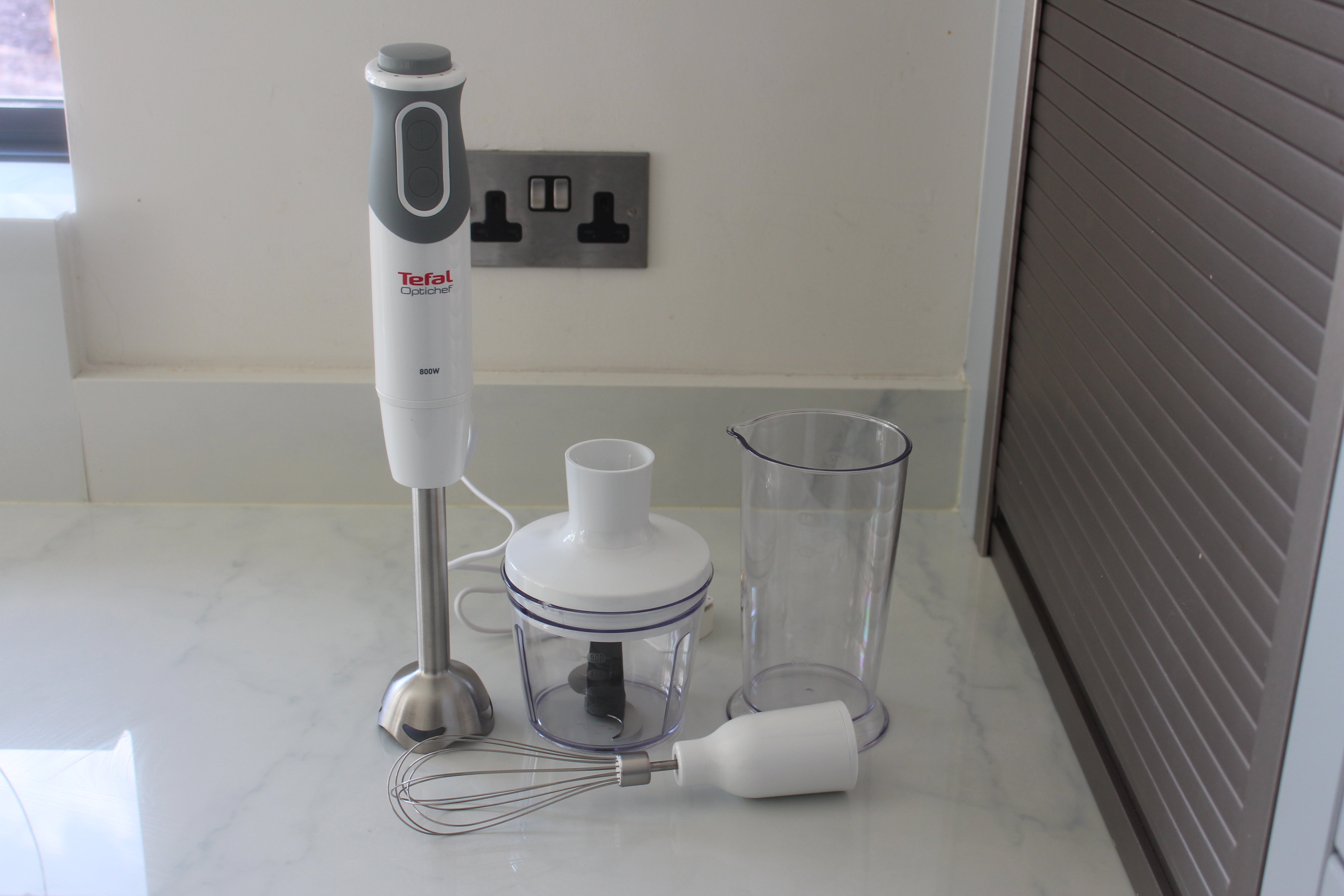 Shape-wise, there’s little to differentiate the Optichef hand blender from similar models. However, it includes some thoughtful touches that elevate its overall design. For example, the sweeping curves and graduated, scooped holes in its practical anti-splash foot prevent liquids from flying around your kitchen, while its non-slip handle increases grip, especially with wet hands. Its speeds are controlled by a dial on top and a power button, with a separate Turbo button.

The Optichef’s beaker has sufficient capacity for blending half a litre of liquid (plenty for a single smoothie) and can be paired either with the blending foot or the whisk, while the mini-chopper accommodates about a handful of ingredients. This makes it ideal for herbs and other small amounts, but you’ll have to haul out a food processor for chopping meat and vegetables on a larger scale.

Rather than a button release, each accessory twists into place, except for the chopper lid.

Considering the Optichef’s capabilities, the instructions are a brief affair. A picture table details the length of time to blend different foods with each tool (with nearly every recommended speed referencing the Turbo mode) and pictures showing how they’re used. I started by making a smoothie with the beaker and blending foot using water, pineapple to test it with fibrous textures, and pear. Even on Turbo, starting the blending was tricky as the fruit tended to compact together in the beaker. After adopting an up and down motion, however, it began to process it. After a couple of minutes, I was left with an evenly coloured smoothie without lumps. There were no splashes, plus the smoothie had little gritty residue and no trace of fibres. The blending leg twisted away from the motor easily. 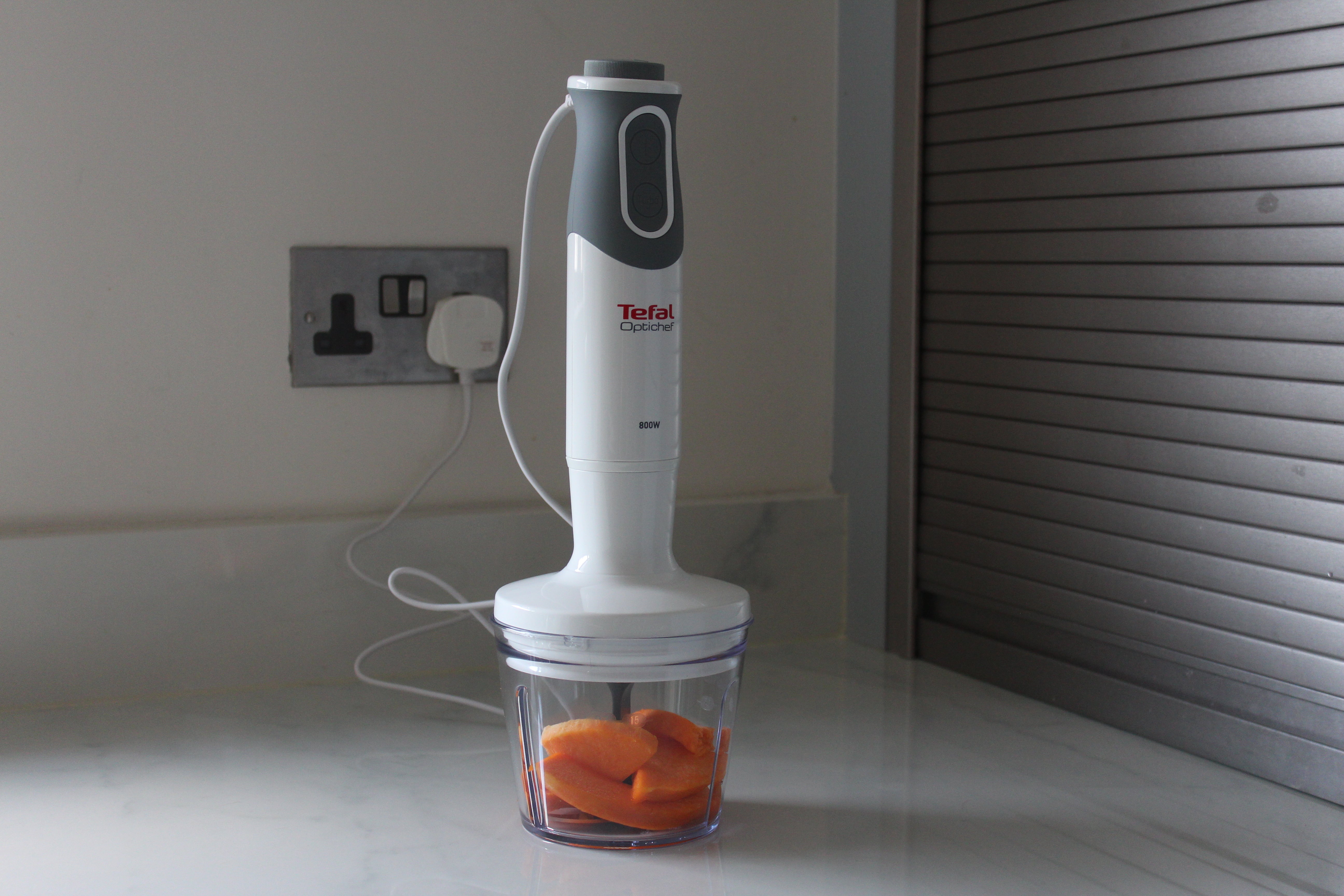 Next, I used the chopper to dice butternut squash. Rather than securely twist into place, the motor fits on top, which meant that it was easy to lose connection with the lid. I also had to hold the chopper to stop it jerking. 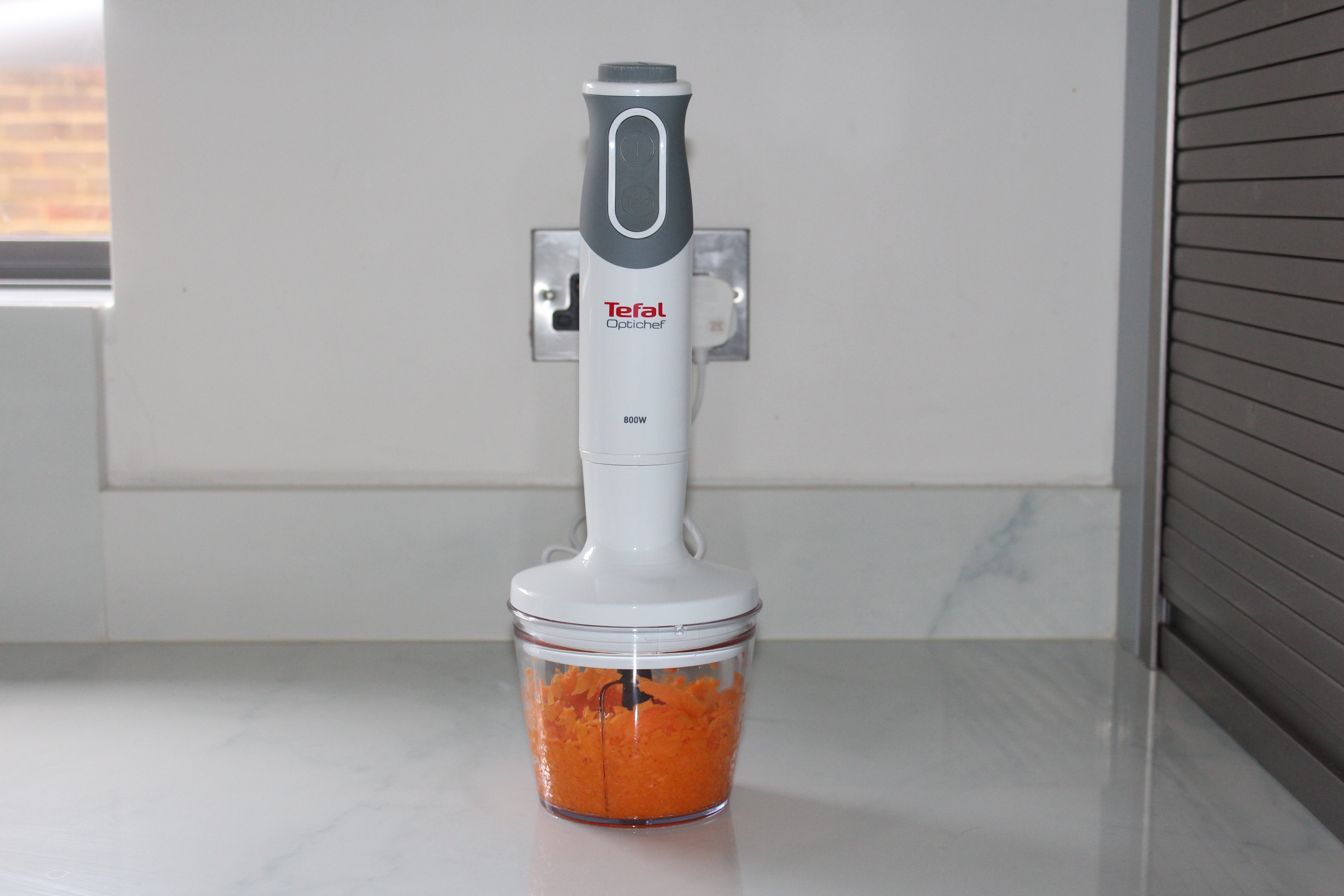 I found pulse chopping with the Turbo button was the most effective way to dice consistently. Dicing this way was mostly uniform with a couple of larger pieces left that had spun away from the blades. What I liked about the pot is how easy it was to scrape out. Rather than straight ridges that make removing small pieces from the sides difficult, the ridges here are sloped in one direction, so you can scoop in one motion. 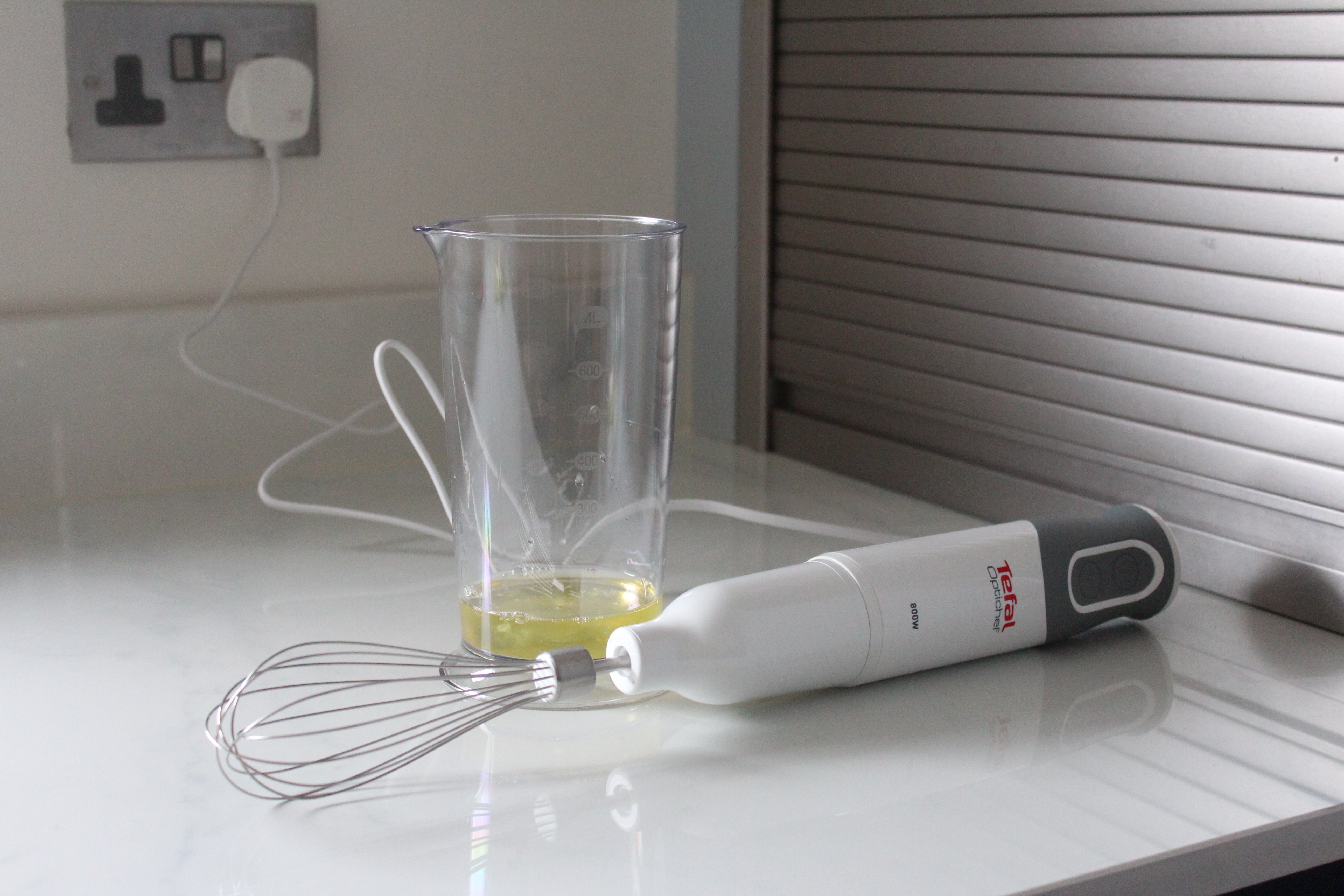 Moving onto the whisk, I added two egg whites to the beaker (the max capacity is four) and used Turbo. While it wasn’t heavy to hold, I found it awkward to press either button for more than a minute as the motor unit shook and was noisy. Some form of lock would be handy for prolonged use – and after three minutes I was glad to put it down.

Fortunately, the whisk was effective, whipping the egg whites to a consistency that stayed firm when inverted. Finally, I made pancake batter using the beaker and blending foot but with a graduated speed. The lowest speed was still quite efficient at blending, minimising flour puff and splashes effectively. I liked that it was easy to scroll up through the speeds with my other hand as it ran. The lower speed exhibited much less suction than the Turbo mode (which can suck to the bottom very strongly if allowed). The resulting batter was smooth, with no lumps, and well aerated. 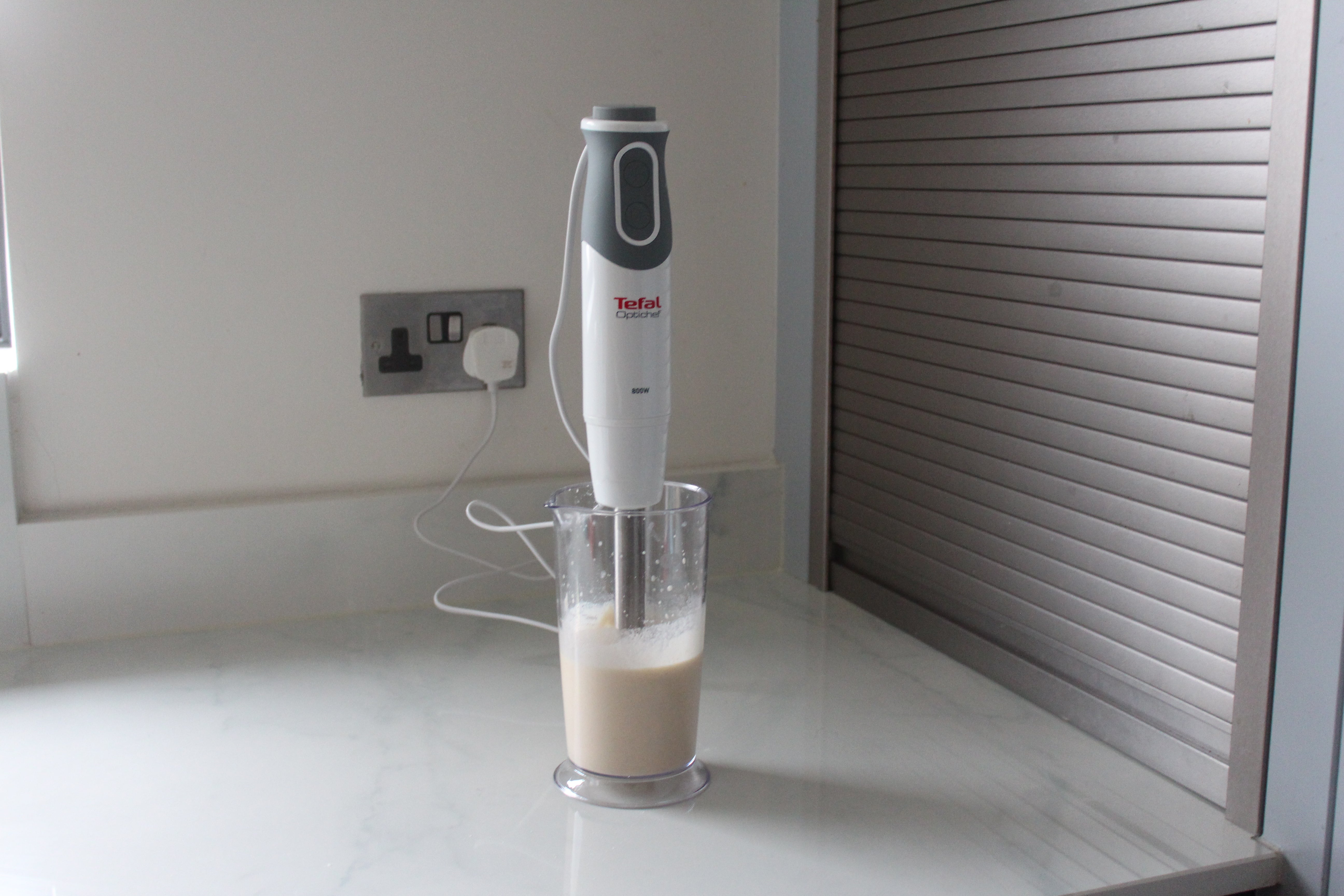 Most parts of the Tefal Optochef are dishwasher-safe, except for the chopper lid and whisk gearbox, which had to be rinsed by hand.

More expensive than budget hand blenders, the Optichef has much to recommend it. Equipped with enough kit and features to be useful, yet not too many to store, it’s a convenient way to blend, chop and whisk with minimal effort. Also setting it apart from rivals is Tefal’s 10-year repairability service, so you won’t have to replace it should it begin to falter.

The instructions could be improved: written guidance with recipe ideas would ensure that it would never find itself at the back of a cupboard. As it is, the Optichef is better for experienced users than beginners.