What is the Tefal Easy Soup?

No stranger to the world of food-prep gadgets, Tefal’s latest, the Easy Soup, puts ease of use at the centre of its design. Each of its functions is only two button presses away and there are plenty of clever touches you won’t find on similar models.

While it doesn’t sauté ingredients – things such as meat will have to be cooked in advance – it will quickly turn them into creamed soup, chunky soup or fruit compote. Its jug-style design makes up to 1.2 litres of soup in as little as 23 minutes for creamed soup, or 25 minutes for chunky blends. Compote can be made in 20 minutes, while a preset blending cycle takes four minutes – great for milkshakes, smoothies and desserts. Its self-cleaning setting lasts a mere three minutes. 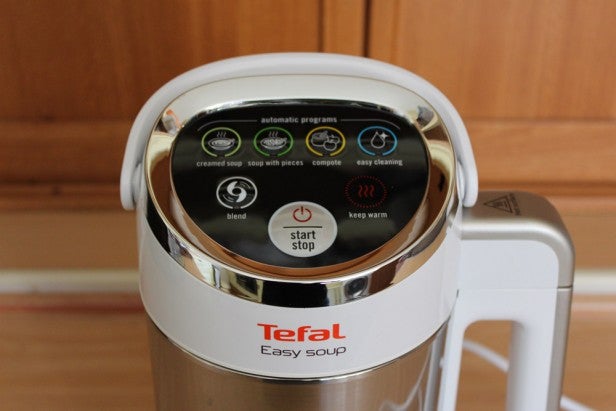 Practicality limits how much style you can add to a jug-style soup maker, but you can’t blame Tefal for trying. A gleaming stainless-steel clad body and chrome-effect lid contrasts against necessarily plastic parts, but the result is still sleeker than comparable models. There’s a detachable power cable, chunky side handle for carrying and a flip-up handle that makes it easier to remove the lid.

You’ll find colour-coded control buttons on the lid, for selecting Creamed Soup, Soup with Pieces, Compote, Easy Cleaning or Blend, plus Start/Stop. Beyond its five programs, there’s a Keep Warm function that maintains the temperature of your soup for 40 minutes after it’s finished cooking. 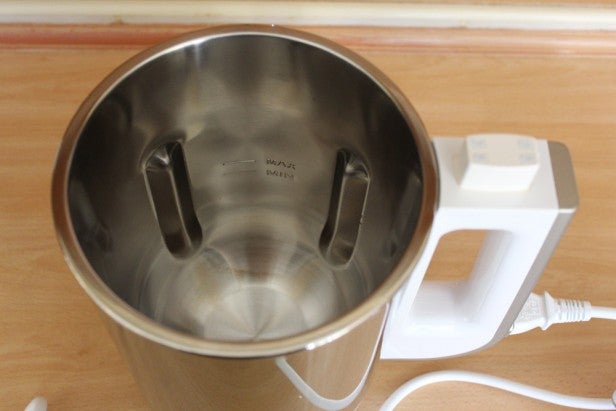 Inside, the entire cavity is stainless steel to stop food sticking, plus the bottom is curved like a bowl, so there are no crevices to harbour lumps. Minimum and Maximum fill levels are clearly marked and the lid, complete with a motor housing and four blades, drops on top, without the need to lock it in – something that makes it simple to get making soup, but that also means it may be less secure if it’s knocked over.

One of the best things about the Easy Soup is how quickly you can be on your way to delicious soup. Assembly is anything but complex – ingredients go into the jug at the start, the lid slots on and you select a program in two button pushes. We decided to make cream of celeriac soup with cumin. 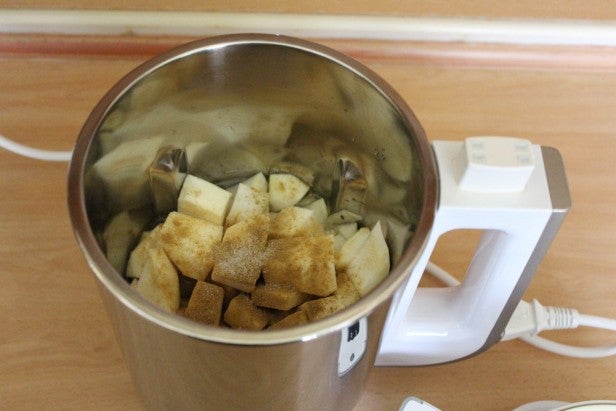 We placed roughly cubed celeriac, celery, onion, apple, water, cumin and seasoning into the jug. Inserting the blades into the mixture of raw vegetables was awkward, especially as there was limited liquid to help the pieces to float, but with a little wiggling, the Easy Soup was ready. Selecting the Creamed Soup programme and Start, the machine began to cook the contents.

Without any visibility, it was hard to tell what stage the Easy Soup was at, although steam from around the lid gave a clue. There’s no ability to pause to check on progress – if you take the lid off, it stops the program – nor a countdown timer either, so if you want to know when your soup will be ready, it’s wise to take note of when you start.

Towards the end of the program, the soup maker went into a short cycle of blending before beeping that it had finished. The top handle was cool to the touch and the lid lifted off in one movement. Adding some soft cheese, we replaced the lid and set it to the Blending program to finish. Unlike other soup makers with a blending function, this is a whole program, but it can be stopped at any point.

The Easy Soup made short work of the celeriac – the resulting soup was completely cooked and pureé smooth. We followed this by making a mixed-berry compote on the corresponding program and again had velvety results with a thick, even consistency.

The Easy Clean program, while a great idea, was less successful. It involved filling the jug with tap-hot water and the machine blending while heating to remove residue. Once the program had finished, there was still some food that needed to be wiped away with a sponge, plus a small amount of burnt residue around the top of the blade stem that required a scrub. 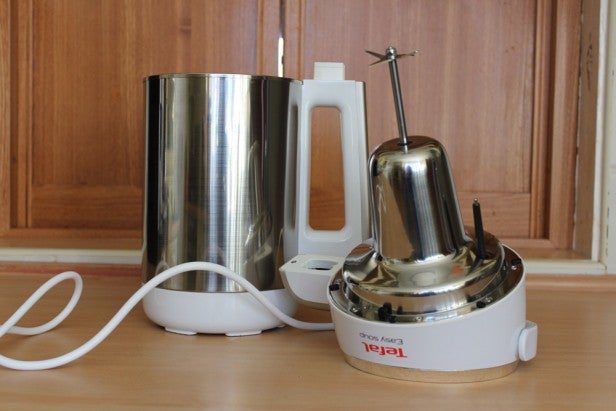 Should I buy the Tefal Easy Soup?

If you’re looking for straightforward programs and speedy soup, the Easy Soup should tick all your boxes. While its self-cleaning program isn’t all it could be, it’s at least automatic and helps reduce mess.

What also sets the Easy Soup apart is its slim cookbook. Many appliances come with average recipes, but this has ideas for more inspiring combinations, such as orange and butternut squash soup, which underscores the reasons for buying a soup maker in the first place – to experiment with your own blends and create exciting meals that you won’t find in the supermarket.

Easy by name and easy by nature, this smart soup maker has lots of plus points for the price, but its cleaning program could be better.