For every indispensable technological development, there are hundreds that never make it off the drawing board. Some barmy inventors even go so far as patenting their crackpot ideas – as a quick browse of the archive at patentlysilly.com, and a dig into past episodes of Dragons’ Den will reveal.


Cordless skipping ropes, sails for bicycles, a device for cooking the perfect hard boiled egg – the list is endless. Even Wi-Fi technology, which has been one of the technological success stories of recent years, has the odd use thought up for it that doesn’t seem entirely appropriate. 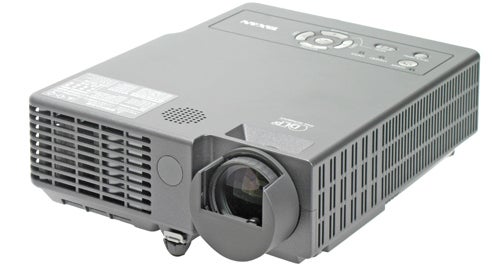 Take wireless projection. Now this is something I always thought would get the funding thumbs-down from Peter Jones, Theo Paphitis and co. Reviews I have written in the past have convinced me that it just isn’t worth the hassle of not carrying a VGA cable around – after all, they don’t weigh very much, you’ve no worries about not being able to display video clips and they’re never likely to let you down in the middle of an important sales pitch.


But the Taxan KG-PS125X may just have changed my mind. Setup is a bit involved as it always is with wireless kit, and entering network keys via the remote control is a pain. But once you’ve installed the software on your laptop and plugged the tiny SD wireless adaptor into the slot on the rear of the projector, the wireless function works mercifully easily. The projected image is responsive, tracking the movement of your cursor reasonably swiftly, while even movies play back, albeit a little jerkily. 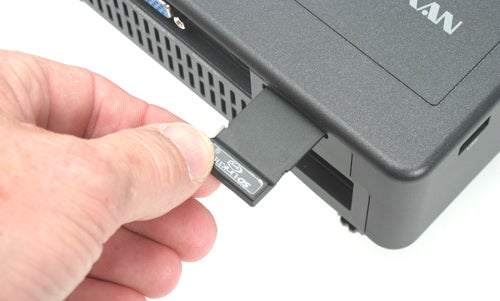 Connection via both ad hoc and infrastructure networking is simple – an important consideration for road warriors who often find themselves in situations where gaining access to the local office wireless router just isn’t possible. And for situations where the projector is permanently installed you can even set the software up to display multiple sources on a split screen. Up to four machines can be connected at once.


Even if you can’t be bothered with the laptop, wireless or otherwise, this projector may have the answer. In addition to the SD expansion slot, there’s a USB socket on the right hand side, which allows you to plug in a thumb drive. It’s a little disappointing that the projector only displays jpeg files and not PowerPoint files, but it’s certainly a handy extra.

So the wireless features work well, but how does the KG-PS125X stack up elsewhere? Well, it’s safe to say that even under the intense gaze of five entrepreneurial giants, it probably won’t let you down. The 230W high pressure mercury lamp pumps out an impressive 2,500 lumens of brightness – easily enough to dazzle a dubious dragon – and the 1,024 x 768 resolution DLP chip renders images cleanly, brightly and with decent colour reproduction. The lamp is good for an impressive 2,000 hours in full power mode and 3,000 in eco mode, when the projector kicks out a still-practical 1,500 lumens.

Connections look sparse at first – all you get is VGA, S-Video, composite and 3.5mm audio inputs on the rear panel – but these disguise more comprehensive potential. Via the VGA socket and an appropriate component conversion cable, the KG-PS125X can accept not only PC signals, but also high definition video signals via a component video connection. 576p, 720p and 1080i (which is downscaled) signals are supported in this way – and I can tell you displaying HD video on it, even at just 720p, looks pretty good when thrown six foot on a projector screen. Of course the lack of an HDCP compliant HDMI port rules this projector out for serious home cinema duty, but to be fair, that’s not where Taxan is aiming it.


There are downsides to this projector, however. First is that it’s not the smallest unit in the world or the sexiest to look at. Though at about the size of a slightly-flattened out shoe box (195 x 58 x 262mm) and weighing in at 1.8kgs, it’s hardly going to strain your shoulder carrying it around. Another factor that balances out the plain looks is the build quality, which is substantial. The thick black plastic casing has a finish that looks like it will resist scratching, and the built-in lens cover is a triumph of design. It even turns the lamp off when you close it. 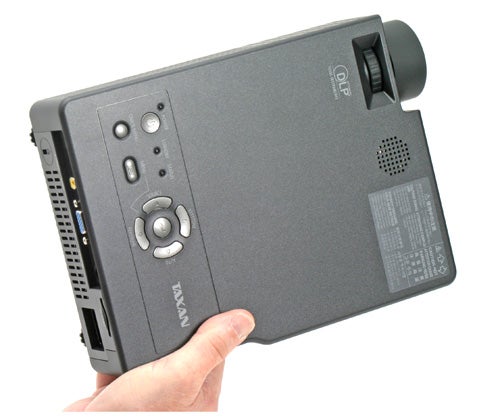 More importantly, perhaps, it isn’t particularly quiet. Even in ‘eco’ mode, which reduces the lamp output and the speed of the fan, it makes a racket, enough so that you may have to raise your voice over it in a small meeting room.


All is forgiven, however, when you take a look at the price, which for a projector of this specification, with wireless capability included is extremely reasonable at £713.23. I could only find one other wireless projector – the Hitachi CP-X2 – cheaper than the Taxan and it couldn’t offer the same levels of brightness. 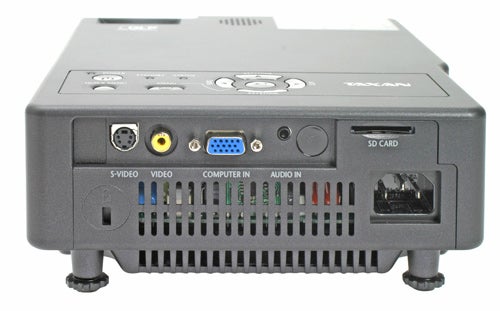 
Despite the success of this Taxan I still feel the jury is still out on wireless projection, especially where portable machines are concerned. But if you have a genuine need for it this is the best example I’ve reviewed yet and, more importantly, it’s very good value for money.