What are the Tannoy Legacy Arden?

British hi-fi legend Tannoy, under new ownership by Music Group, has donned its rose-tinted glasses to reintroduce and rework three pairs of the brand’s speakers from the ’70s. The Eaton, Cheviot and Arden are all designed and handmade in Scotland, with this, the Arden, being the largest of the new Legacy-series trio.

And large it certainly is, housing a massive dual-concentric driver featuring a 15-inch paper cone. You’d better make sure you have the room size to cope with these, because there’s some serious air gonna get shifted…

Watch the Legacy series being built

The Arden are going to polarise opinion. Hi-fi design often does, but ’70s wood with sharp edges and right angles even more so. Oh, and burgundy cloth grilles. Keep those grilles on and you’d be forgiven for mistaking these speakers for a pair of venerable drinks cabinets filled with Galliano and crème de menthe.

Personally I’m a big fan, but they won’t be a good fit for everyone, nor every home. And be warned that these are not just bulky, but very heavy – getting them up a flight of stairs would be the stuff of nightmares.

The sides and top of the cabinet are 19mm thick and have an immaculately joined and finished walnut veneer. There’s even a pot of wax included in the box to ensure your speakers’ wood doesn’t lose its lustre – a nice touch. 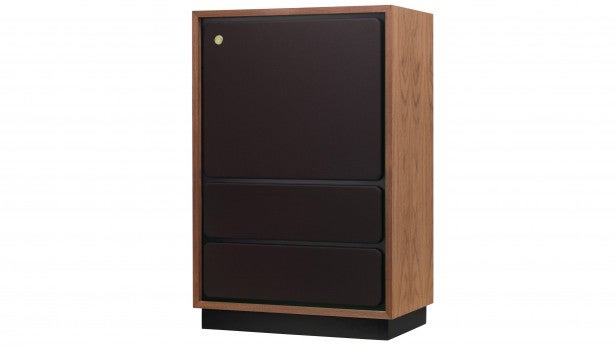 Remove those nylon-cloth grilles – there are three per speaker – and you uncover in turn that enormous dual-concentric driver, the crossover-adjustment panel below, and then the three gaping bass ports at the bottom.

The dual-concentric driver consists of a 15-inch paper pulp cone with a rubber surround, bullseyed with a 1.3-inch aluminium-magnesium alloy dome tweeter. Both have an edge-wound voice coil. 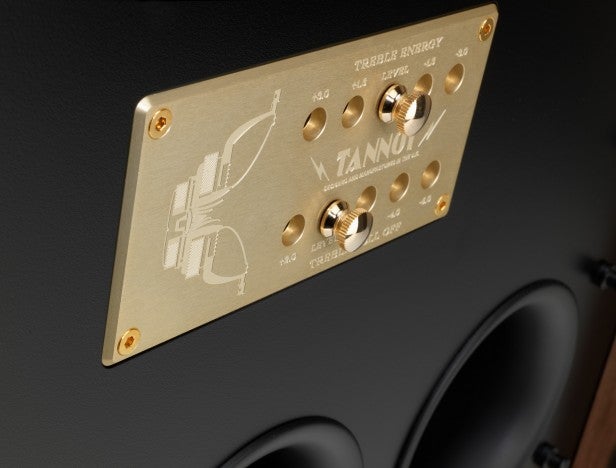 The gold-coloured crossover panel enables tweaking of the Arden’s treble performance by means of two gold-plated finger bolts. The top bolt can be unscrewed and moved to reduce or increase treble energy, while the lower bolt adjusts treble roll-off. This is the same system as used in the original 1974 Arden models, although the crossover itself is all new. 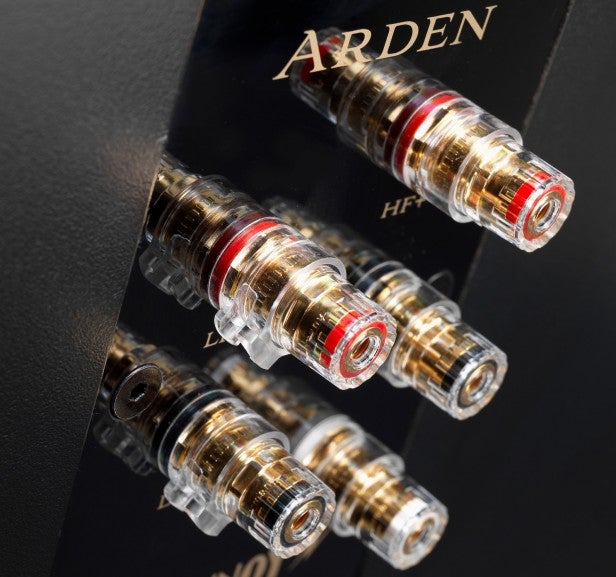 Around the back are two pairs of 24ct-gold-plated WBT banana-plug terminals for bi-wiring, although jumper cables are supplied for those who don’t care to bi-wire. An additional terminal’s included on each speaker for optional grounding.

For contact with the ground, you get two screw-in choices – isolation spikes for carpets or adjustable feet for hard floors.

Sensitivity is a high 93dB, and impedance a very standard 8 ohms, so you shouldn’t have too much trouble partnering with quite modestly powered amplification. Similarly the front porting ensures that you’ll be OK positioning the Arden with their backs close to a wall. So although these speakers require plenty of space to accommodate both their physical and sonic presence, they’re otherwise rather versatile. 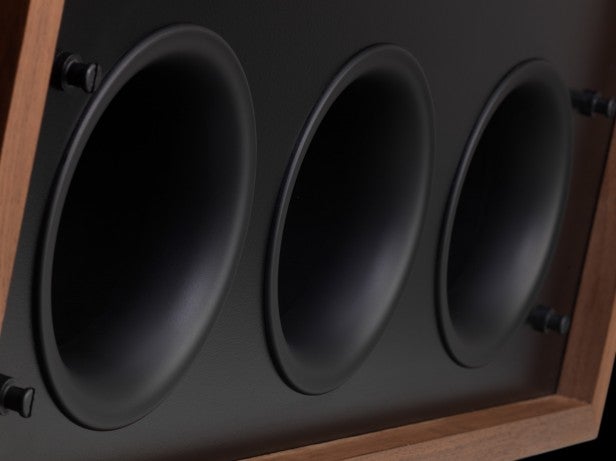 I mostly tested the Tannoy Arden wired with Atlas Mavros speaker cable to either the Musical Fidelity M6 Encore all-in-one or Leema Acoustics Tucana II Anniversary Edition amp. With the latter I used a Chord Hugo 2 DAC and Microsoft Surface Pro 4 for a digital source, or a Rega RP8 turntable and Apheta 2 cartridge for some vinyl action.

I started with the treble settings on the Arden at level for both energy and roll-off. First impressions were of massive scale, and a warm, laidback presentation that could almost have come with its own bottle of port and a fondue set. Clinical and uncoloured it was not, but it certainly wasn’t unpleasant.

With the treble energy ramped up one notch, things came alive. Boy did they come alive. 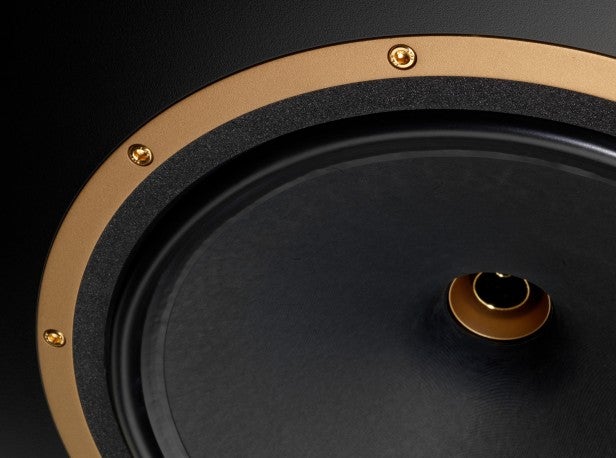 Listening to Josh Ritter’s ‘Sermon on the Rocks’ the piano at the opening of ‘Homecoming’ popped and shimmered in the air with utter perfection, swiftly joined by the kickdrum thudding with real gut-punching authority. As the song built to its climax, the unbelievably expansive soundstage filled with layer upon layer until I could almost feel a wall of air being pushed towards me by those massive drivers.

Playing some bass-heavy Massive Attack and Gorillaz, the bottom end was truly astonishing – deep and solid without ever feeling lumpen or loose.

With something more intimate – the haunting title track from Joe Purdy’s ‘Canyon Joe’ – the rock-solid imaging ensured that Purdy sat slap-bang in between the two speakers. The level of realism was simply astonishing. Few speakers can give you that feeling of actually being at a live gig, but these are just such a pair.

Out of interest, I whacked the treble energy up to full, but even with a little roll-off, this proved just too harsh and fatiguing in my setup.

Tannoy had mentioned that the Arden really shine with female vocals, so I played some of the tracks on Sam Beam & Jesca Hoop’s ‘Love Letter For Fire’ where Hoop takes the lead. They weren’t wrong. That sweet, warm mid-range released so beautifully and also retained superb separation when Beam harmonised – two distinct voices singing perfectly together without ever muddying into one.

Moving onto some classical in the form of Glenn Gould’s 1955 recording of Bach’s Goldberg Variations, the Arden coped well with the difficult transients. The piano notes stopped and started with enough edge to do justice to the incredibly intricate playing.

As long as you like a little honey in your musical diet, there’s really nothing the Arden can’t handle. The touch of added sweetness and warmth means the Arden are a little better suited to acoustic pieces, but electronica still comes off well. 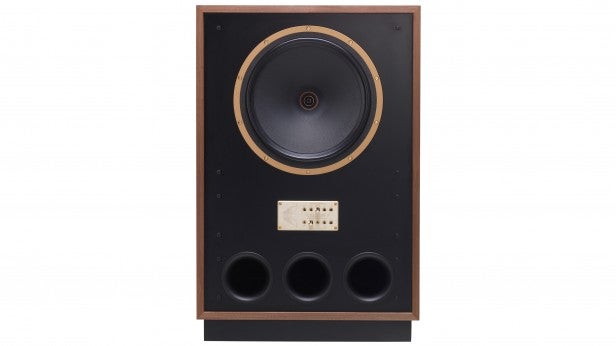 Should I buy the Tannoy Legacy Arden?

If you’ve got the listening space for them, the Arden are an absolute must to audition. Even if you’re turned off by the ’70s styling – it won’t be for everyone – the performance is so utterly beguiling that you might be shopping for flares and paisley wallpaper before the end of the first song.

There’s also very little on the market that’s quite like the Arden. There are speakers that offer a less coloured sound, a more detailed treble, or more agile bass, but few (if any) that offer such breathtaking scale combined with wonderful subtlety and pinpoint imaging.

Break out your wing collars, kick back and let these retro monsters take you on a sensational sonic trip.