Tally Genicom sells a wide range of mono and colour laser printers, as well as label printers and all-in-ones. The 9035, a workgroup mono laser, has several interesting features, including twin paper trays as standard. As with most workgroup printers, one of the main features you’re paying for is speed. A typical personal laser will print at around 16 pages per minute, while the 9035 is rated at 34ppm.


This is a large printer for a mono laser – bigger than some colour lasers we’ve tested. Part of this is due to the second paper tray that’s integrated into the body of the machine. The main tray holds up to 500 sheets, while the second one, which can also be used for special media, can take a further 150.


Print jobs all exit to the top cover and there’s a big drop from the output slot, so you can print substantial runs without running out of room. There’s a little mound to support pages coming out and another that houses the status display. This is a two line by 16 character display, but like so many others, suffers from not having a backlight. 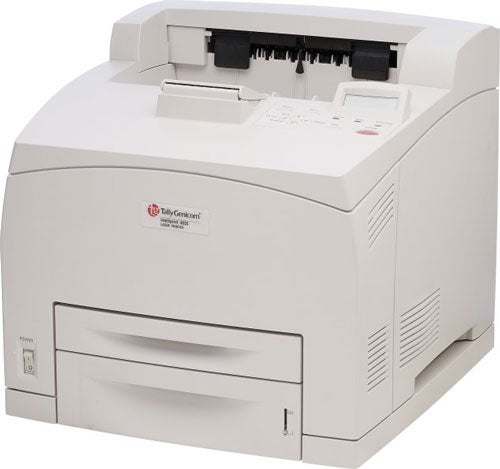 The control panel comprises nine buttons and three indicator lights and uses a hierarchical menu system, as do most printers of this type. Unusually though, the diamond of arrow keys moves through the menu in odd ways. The up and down arrows select previous and next options, while the left and right arrows are for return and select, respectively. This is the opposite way round from most other printer controls and takes some getting used to.


At the rear are sockets for USB 2.0, parallel and Ethernet networking cables. As you might expect for a workgroup printer, this machine supports networking as standard.


If the 9035N looks a bit familiar, it could be because this machine is a rebadged Brother HL-8050N. This needn’t be a disadvantage. In fact, having two sources of consumables can be a distinct bonus, as you can pit one against the other. If you find a source of Brother toner cartridges cheaper than the Tally ones, there’s no reason not to use them. From our investigations, though, it appears both printer and consumables are cheaper in their Tally Genicom versions, with the printer itself nearly £100 less than its Brother sibling.


Installation is as simple as lifting a hatch on the top surface of the printer and sliding the drum and toner cartridge down inside. The Tally software installation is nearly as straightforward, though you have to be careful to pick the correct version of the driver for the model you have. Here, we’re testing the 9035N, but there’s a PostScript version available, too.

19 seconds for a five page text document is a fair pace, a bit over 15 pages per minute, but still less than half the rated speed of 34ppm. All printer manufacturers are in the same game together; when one quotes speed for a draft text page with very simple content, they all have to follow suit or its printers look slower than the competition. Even so, it’s annoying that rated speeds bear little relation to what most people will see, when printing typical business correspondence in normal quality.


Graphics and photo pages also printed quickly, completing in 12 seconds and 13 seconds respectively. Getting four pages of photo prints from a laser within a minute is impressive.


Print quality is variable. Text print is clean and sharp and doesn’t look too heavy on the page. Graphics print, though, is marred by a noticeable striping, particularly in areas of constant tone. This is also reflected in photographic output, where there is visible micro-banding. 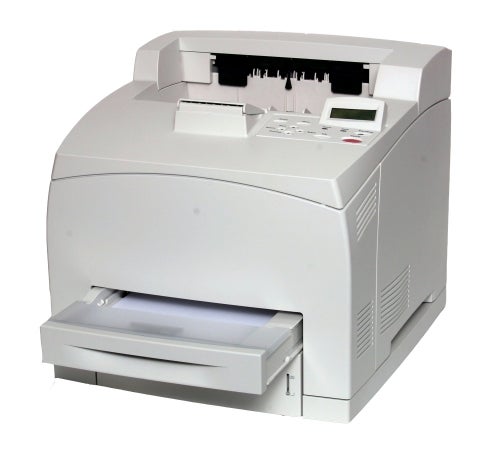 It isn’t just the print quality that marks out this printer, though. Noticeable roller bands mark the pages, running down their full length. This is on the standard 80gsm copier paper, which we use for all printer tests


The main consumable is a drum and toner cartridge, good for 17,000 pages at 5 per cent cover. A maintenance kit, which comprises a new fuser and feed roller, is also needed after 200,000 pages. If this were a small business printer, we might consider a service interval of 200,000 pages close to the lifetime of the printer, but the 9035 is rated as a one million page machine so, theoretically, you could use up to five maintenance kits during its life.


Even factoring in the maintenance kit, the 9035 returns a very competitive page cost of 1.72p per page. This is a very economical printer to run, and one that pretty much only stop for paper.


Tally Genicom’s 9035 appears, unusually, to be cheaper than the original Brother machine from which it’s rebadged. It prints fast, though the quality is not always there, and enjoys the added convenience of twin paper trays. You pay for speed, but for a network printer this may offer big efficiencies throughout an office.