What’s in a name? First it was Mannesman Tally and now it’s TallyGenicom, the German-based company that deals primarily with corporate printer needs. It markets a wide range of monochrome and colour lasers and impact printers and here we’re looking at an entry-level mono laser, the 9022.


This printer is a thinly-veiled Samsung ML-2250. Plenty of manufacturers fill gaps in their product line by rebadging others’ machines, so there is no stigma in this, but you have to consider whether the original manufacturer’s version is the better buy. In this case, what does the 9022 offer that the ML-2250 doesn’t?


The printer looks sleek enough, with its slightly raised back adding a style highlight to what would otherwise be a rather cubic, beige box. There’s a bulge running most of the width of the printer at the rear, which hides the power supply and interfaces, so it has a bigger footprint than most pictures of it suggest.


Paper feeds from a 250-sheet tray underneath, to an output tray set into its top. Additionally, a 50 sheet, multi-purpose tray unfolds from the front panel for special media, such as envelopes or letterheads. An optional, second 250-sheet tray can be fitted underneath, providing a decent amount of direct paper feed. 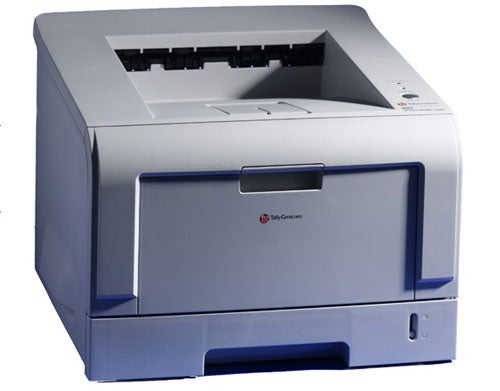 A single control button is used to cancel a printing job or to switch in draft mode, and two indicator lights show draft on and any print errors. It’s useful to be able to switch to draft mode for an individual job, without having to delve into the printer driver.


The 9022 has both parallel and USB 2.0 inputs and there are options for Ethernet and wireless adapters, which can be fitted internally.


The only consumable in this printer is an all-in-one toner cartridge, which slides into place once you’ve folded down the front cover of the machine. The cartridge lasts for 5,000 pages, but the printer is provided with a ‘starter’ cartridge of just 3,000 pages.


It was quite hard to make Windows recognise the 9022 as a TallyGenicom printer, rather than the Samsung machine it seemed determined to install. It also wanted to set up the printer as a parallel device, even though we had it connected through its USB 2.0 port. Once we had persuaded it of our intentions, it ran without problem and its well-featured printer driver offers multiple pages per sheet, watermarks, overlays and fit to page functions.

The 9022 was marginally quicker at printing our text and graphics test piece than its Samsung cousin, but marginally slower at completing our five page text sample. Our photo sample produced a dead heat between both printers, even though the TallyGenicom was printing our new, standard 15 x 10cm test print.


The print quality from this machine is very good. Text is clean and dense, with well formed characters that show no apparent splatter. Greyscales in business graphics are smooth, with well-defined dither patterns, though there is slight banding in some of the lighter tints. Photographic prints, at the top resolution of 1,200dpi, are well-defined, though there is considerable loss of detail in the shadows and some variation, again through banding, in areas of varying tone.


TallyGenicom quotes the printer as producing 51dBA when printing and we wouldn’t argue with that sound level. Subjectively, this isn’t a noisy printer, though it’s obvious when it’s working. 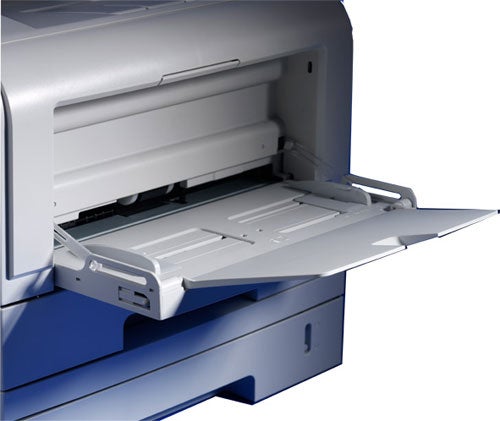 The 9022 costs around £60 more to buy than the Samsung – though Tally has good discounts for direct business sales, so this might come down – and each cartridge costs about £20 more. TallyGenicom offers ‘free’ on-site maintenance for years two to five of ownership if you buy only own-brand consumables (both Samsung and TG provide free on-site cover for the first year), so it looks like the better deal.


However, say you print between 5,000 and 10,000, 5 per cent pages, or equivalent, per year. That means you’re effectively paying £40 (cost difference on two cartridges) plus £15 (one quarter of the initial price difference), which equals£ 55 per year for full on-site maintenance.


Doing a quick Google search finds a three-year, on-site warranty for the Samsung machine from www.shopuk.co.uk at £44, all in. Against that, the TallyGenicom ‘free’ maintenance doesn’t appear that good.


Calculating the consumable costs using the cheapest source of toner cartridge we could find, gives 2.23p per page, which is not that cheap compared with its main competitors and around 30 per cent more than the Samsung price (1.69p per page). You could reduce the running costs of the 9022, of course, by buying Samsung consumables, which will fit and run in this machine.


There’s very little to choose in design and performance between the Samsung and TallyGenicom versions of this printer. Where the TallyGenicom offering differs is not in the printer but in its support. TallyGenicom online support from its own service technicians is included in the price of its consumables. While this is good for peace of mind, it’s still a more expensive option, overall.