When reviewing printers there’s a temptation to equate size and weight with price. Doing that with TallyGenicom’s 8108N gives you a completely skewed view, though, as this entry-level machine is only £150, a very good price for a colour laser.


This is a big machine in virtually all respects. It sits high off the desk and has a footprint quite a bit bigger than an A3 sheet. It’s not a comfortable single-person lift, though with a machine like this, you’re unlikely to be moving it around much. It bears a remarkable resemblance to Lexmark’s C500n and we suspect it’s a rebadged version of the same machine. 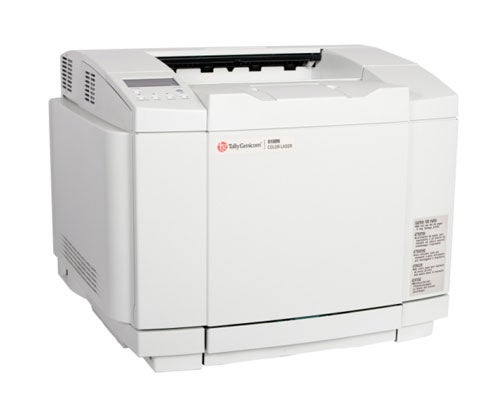 It has a conventional layout, with a 250-sheet paper tray at the bottom feeding out to the top surface of the machine, which is big enough to take A4 sheets without folding out the paper support. A second, 500-sheet tray is available as an option and sits underneath the printer.


A simple, two-line LCD display has no backlight, but because of its near horizontal angle is easy to read with virtually any overhead illumination. The control panel consists of six buttons and these work well with the machine’s logical menu system. At the rear are sockets for USB 2.0 and Ethernet connections, as networking is standard.


Loading consumables into the 8108N is very simple. The transfer belt on which the colour image is built up slides in from the top under a clip-on cover. However, with a service life of 120,000 pages, it’s unlikely to need replacement during the life of the machine. The four toner cartridges slide in from the front, once you’ve hinged the front cover down, and are keyed so they will only fit into their correct slots. 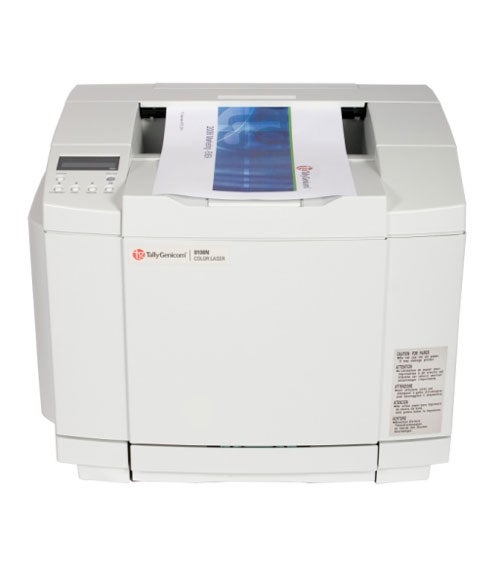 Software consists of a printer driver and a network print utility and installs directly from the supplied CD. The driver includes support for multiple pages per sheet – though only up to four-up – watermarks and several different colour settings.


Because of the use of a transfer belt, colour prints take roughly four times as long as black ones, since each page image is built up colour by colour and then transferred in one pass to the paper.


TallyGenicom claims a colour print speed of eight pages per minute and a black speed of 31ppm, but under test we saw 13.6ppm for black and 6ppm for colour. Even printing in ‘high speed’ mode, the printer didn’t reach 15ppm printing black. In practical terms, this is still a decent speed for an entry-level colour laser, it just bears little relation to the manufacturer’s claim.

Black print is one of the strengths of this machine; it’s clear and clean and suffers little spatter or jagged edges. Even at small point sizes it remains readable and in high speed mode, the printer’s equivalent to draft print, it’s still very clear and quite suitable for internal documentation.


There are three different colour settings available within the print driver, labelled Document, Photographs and Graphics. The printer defaults to Document and printing colour business graphics produces shades which are too dark and too intense. It was very hard to read black text over an area of blue tone in one of our test pieces, though the tone should have been quite pale.


Photographic output is definitely best in photograph mode, though even the colours are over-egged and there’s some loss of detail from the 600 dpi output. In its favour, the printer handles shadow detail comparatively well.


The 8108N isn’t a quiet machine and we measured noise output during printing at peaks of 62dBA. It could get quite irritating if the machine is positioned close to your desk. However, the spread of different sounds is fairly typical of a laser printer and there’s nothing particularly offensive in the mix.


TallyGenicom claims a service life for the 8108N of 120,000 pages, and since the machine has a duty cycle of 1,000 sheets per month – in itself a bit low – we feel it’s fair to consider this a lifetime component. We haven’t included it in our calculation of running costs.


That leaves just the four colour toner cartridges and these are available in standard or high-yield versions. We would strongly recommend using the high-yield cartridges, as they represent much better value from money. Page costs work out at 2.02p for a 5 per cent black page and 11.1p for 20 per cent colour. The black page cost is reasonable in comparison with other colour lasers costing under £200, but the colour cost is high, with competitors coming in at between 8p and 10p per page.


This is a physically heavyweight printer, but it performs no better than other entry-level machines in the same price bracket. Indeed, because it uses a transfer belt, its colour print speed is quite a bit slower than with in-line machines like the Canon LaserShot LBP-5000. Print quality is generally good, though default colours are far too intense and colour prints remain costly in comparison with its main competitors.