What is Tales of Xillia?

The Tales series is a long-running dynasty of JRPGs. Before Tales of Xillia came Tales of Graces, but the last high-profile launch in the series was Tales of Vesperia, back in 2008.

Tales of Xillia isn’t going to convince any JRPG-haters that they should embrace the genre, but a strong battle system should please those who are not averse to it.

Tales of Xillia – Story and Setting

Like many JRPGs, Tales of Xillia’s tale is a convoluted one. It centres around the journey of a university student and a demigod who has taken the form of – you could probably guess – a pretty young girl.

This girl Milla is trying to restore the spirits who used to be her constantly companions, and who have since been sucked into oblivion by a giant telescope weapon. Yes, it’s a little out there, but neither story nor setting is of paramount important to the success or failure of Tales of Xillia.

Tales of Xillia is happy to reduce much of its world into a series of symbols and cyphers, and doesn’t try too hard to hide its largely linear, repetitive structure. Its cut-scenes are often stilted, and full of dodgy voice acting and its world doesn’t have a huge deal of character, but the game continues to function well regardless. 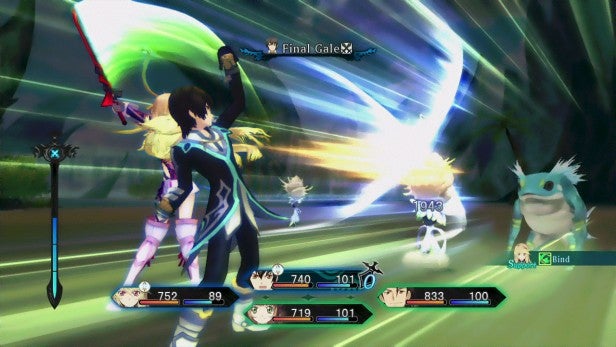 Its success is largely down to its batle system. Tales of Xillia doesn’t use the slow, considered turn-based battle system used in many JRPGs. It’s all about the action.

Although you fight in a party, initially with two characters and swelling as you progress, you only really need to worry about your own. Heck, you can even set fighting to auto if you like.

Unfolding like a third-person action game, many battles can be slogged though with mere button-mashing, but there are more intricate systems underneath to be learnt. As well as normal attacks, there are ‘magical’ attacks called artes.

These can then be weaved into combos by linking attacks with other members of your party. There is timing involved, and skill.

Of course, as is typical of the genre, not all battles require these more advanced techniques. Structurally predictable, Tales of Xillia can be split into a series of friendly areas, nodes that are separated by fields full of wandering beasties. And after each chunk of a couple of hours’ play there’s a boss. 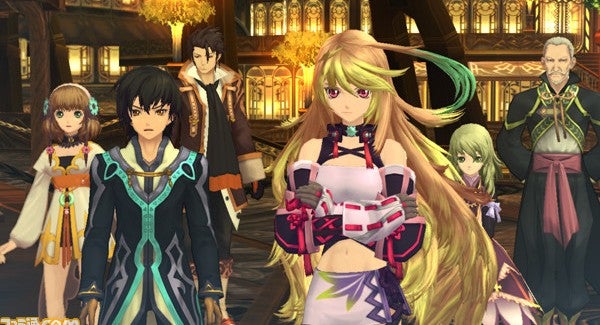 If you haven’t done your fare share of battling anonymous foes, or haven’t tried hard enough to learn the more nuanced elements of the battle system, you will fail. However, there’s enough going on in to stop the grind from becoming a slog for the most part.

It’s not just the fight itself, either. Equipment and character skill development have a hand in making you feel like you’re getting somewhere in Tales of Xillia, rather than running on the spot.

Equipment isn’t just found. It’s also unlocked in shops through your own investment in the shop itself. Give shops money, or items you’ve found along your way, and you’ll gradually get access to more equipment.

This mechanic provides a sense of agency in gearing yourself up that mitigates that feeling of annoyance that you’ve just hit another difficulty spike that needs to be surmounted.

Levelling-up isn’t entirely automatic, either. You pick nodes on a spiderweb of upgrade, which increase your stats and introduce other kinds of bonuses.

Incidental or tangential parts of the main meat of Tales of Xillia are what keep you hooked into the game. And they also end up supplying its personality.

The game’s graphics do not. They are pedestrian, rather lacking detail in a way that makes the world feel all the more like a collection of symbols and archetypes rather than a real environment. The visuals show little of the development that has happened over this generation’s near-ten-year cycle. 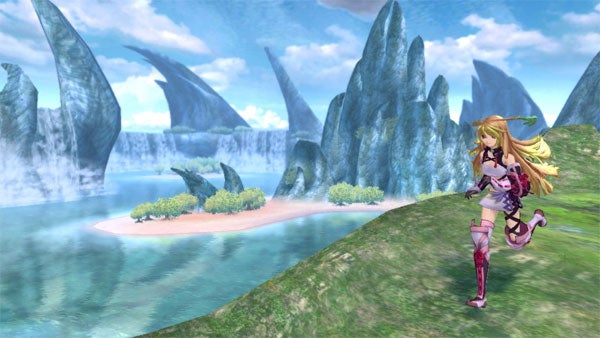 The game’s personality instead comes from what Tales of Xillia calls skits. Pretty regularly, an indicator will pop up at the bottom left of the screen, telling you to press a button to fire one of these skits up. They’re not full cutscenes, just little audio clips with talking heads from members of your party.

Tales of Xillia’s skits veer between cringy and genuinely amusing, centring on the banter of your party members and their back story, and are arguably more important in giving the game a specific flavour than the actual story cut-scenes. Apparently the old adage about the journey being more important than the destination holds true here.

That said, there are some ‘drawn’ anime style cut scenes that are far more impressive than the often clunky in-game ones. Despite some dodgy voice acting and a story that can appear to lack direction, Tales of Xillia’s characters are engaging despite it all.

In a game of this length, that’s a requirement. Tales of Xillia will last upwards of 30 hours, and longer with all the sides quests to consider. However, they’re generally not hugely engaging so we’d advise taking it easy unless you’re a completionist.

Should I buy Tales of Xillia?

The latest Tales game carries on the series in solid fashion. The battle system is richer than last time around, and its structure will make Tales of Xillia fairly easy to drop in and out of over weeks or months.

However, this is very much a game of its genre, and one that is unlikely to appeal if you find the popularity of series like Final Fantasy baffling.

Tales of Xillia is a solid action RPG with moreish elements that make it one of the better Eastern role-playing experiences of this year. However, it’s unlikely to convert many who aren’t into this type of game.