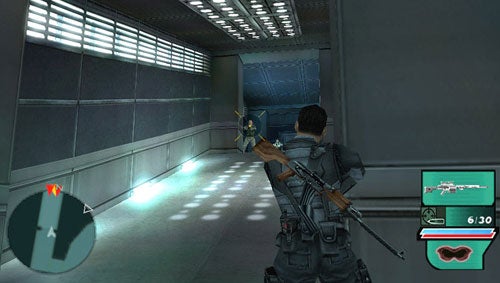 I remember a time when the ideal of near-PS2-quality games in the palm of your hand was a part of the PSP dream, not a symptom of the overall malaise that has so spoilt the Sony handheld’s software library. On occasion, games have actually delivered something amazingly close to that description: Virtua Tennis, Ridge Racer, WipEout Pure and Daxter springing instantly to mind. However, these shining moments are almost swamped by a deluge of overambitious failures and half-baked compromises – think Prince of Persia: Revelations or Splinter Cell: Essentials, or just about anything with EA branding on it. These games attempt to give you the same experience on a handheld that you would get on a TV-based console, without doing anything to solve the issues that are always going to bedevil the PSP: the controls, the slow loading times, those tricky memory limitations. You end up with a game that looks great in screenshots, but suffers from pitifully poor frame rates or huge pauses for UMD access or sudden stalls in the gameplay or a woefully inadequate control system. Or – if you’re really lucky – all of the above.


All of which makes it tempting to get over-excited about Syphon Filter: Dark Mirror. This is a PSP action game with intelligent controls, impressive fluid visuals and heaps of well thought out gameplay. In fact, it’s tempting to slap a 9 on it and urge you to rush out and buy it immediately. 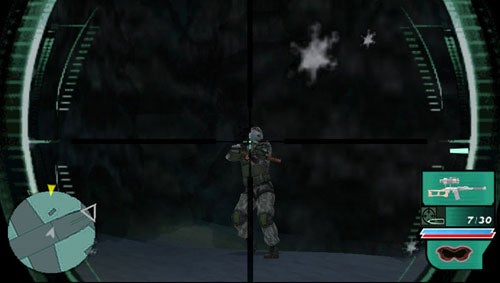 But I won’t. It’s not that Dark Mirror isn’t an excellent game – it is. It’s just that I can’t help thinking that the fact that it doesn’t fall into the same traps as 95 per cent of PSP games doesn’t automatically make it an all-time classic. Yes, you’ll be amazed that the game can map running, crouching, crawling, hand-to-hand combat, aiming, sniping, wall-sidling, corner-peaking, climbing, weapon selection and three types of goggle to the PSP’s analogue stick, D-pad, face buttons and shoulder buttons and still create a control system so slick and intuitive that you’ll have mastered it by the end of the first couple of missions. Yes, it’s almost unbelievable that the PSP can handle multiple opponents, busy locations and some surprisingly advanced fog and lighting effects without ever seeming to struggle or lose a frame. In fact the level of polish is astonishing. The game packs in a relatively complex plot linked together by in-game engine rendered cut-scenes, a suitably moody score and gritty dialogue onto that little UMD. And once the initial load is over, the game doesn’t even leave you waiting long between missions. You just have time to read the briefing before you’re straight back into the action. 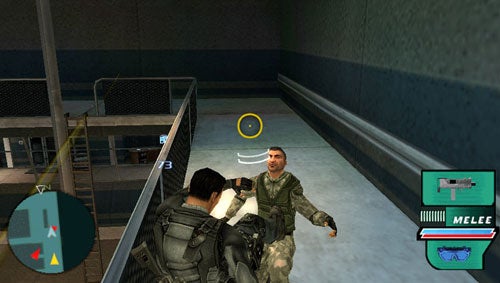 What’s more, Dark Mirror has all the staples of the spy game genre down pat. You want gadgets? You’ve got them: infrared, night-vision and electronics-sensing goggles, plus a sniper rifle loaded with exploding cartridges, high-voltage ‘insta-death’ darts (for when you must have that silent kill) and poison gas darts (take out several baddies in a single go). You want stealth? Dark Mirror doesn’t quite match Splinter Cell for cool wall-creeping, corridor spanning or stealth-attack moves, but it’s not that far behind. 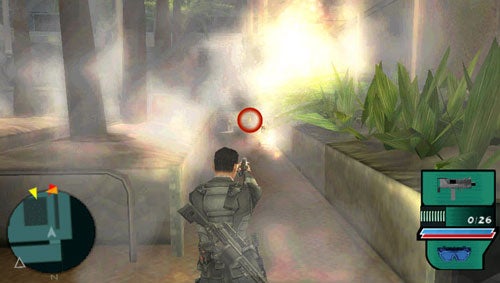 And if you want action, Dark Mirror does that too, outdoing Perfect Dark for hide-behind-the-crate-then-pop-out-to-take-a-shot gun battles. In fact, it gets several things right that most grown-up console action games get wrong. There are guard and escort missions here where your companions actually have the sense to take cover rather than blunder into the enemy’s sights; where they’ll actually take on the baddies by your side, or give you covering fire if asked politely. The game is even quite imaginative in these moments. There’s a superb chapter quite early on where a friendly engineer will fix some server issues for you, but you need to keep him alive while he crawls around the ventilation system and finishes the job. As the enemies are attacking him from within ventilation shafts, you need to change your current goggles to keep him safe. It’s not just smart – it’s truly brilliant stuff.


Better still, Dark Mirror is far from the usual truncated experience you expect on PSP. About three hours in my heart sank as I came towards the end of my mission; I’d worked my way through a besieged chemical refinery, saved some innocent bystanders, and started to unravel the standard-issue terrorist plot, and I’d begun to fear that the game was working up to a speedy conclusion. But then the mission ended, I found myself at a cut-scene, and it was on to the next exotic location. With seven missions in four different environments, there’s actually a surprising amount of game here. What’s more, completing the main game unlocks several bonus missions. 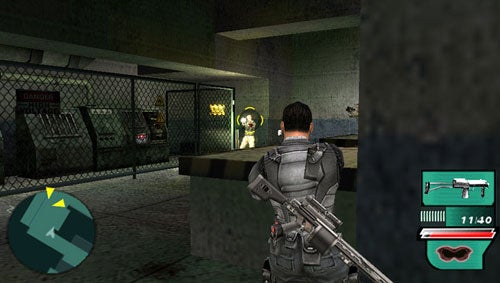 Nor do those missions get samey. That’s partly because the game continually throws in new objectives to spice up the pacing – within the same hour you may be defusing bombs within a time limit, covering a colleague from a sniper position and then escorting an old flame around a South American warzone while she searches for confidential documents. However, it’s also because the game has you playing as other playable characters. Every now and then you get a holiday from Gabe Logan – the slightly low-rent take on the Sam Fisher/Solid Snake archetype (though Gabe actually predates the gravel-voiced Splinter Cell hero by a few years) – to play as his attractive colleague, Lian Li. Admittedly, there’s not all that much to choose between them, but her differing objectives help round out the mission and add a breath of fresh air to the game. 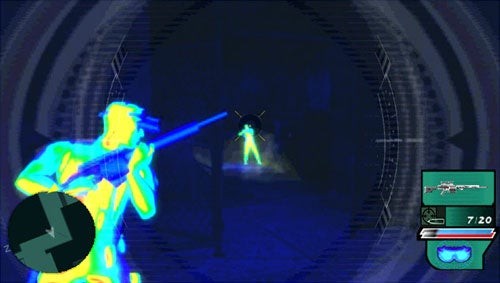 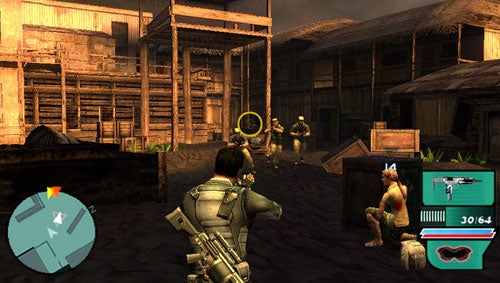 And finally, you have to respect the AI. Maybe your terrorist opponents aren’t from the F.E.A.R./MGS/Spinter Cell College for Clever-dick Villains, but they’re a world away from the disposable cretins of the recent Miami Vice, making some effort to track you and fire from a position of safety. Perhaps that’s why the game can even conjure up a few magnificent set pieces, like the section early on where the enemies close in through the mist of a secret biotech research Lab, pinning you down mercilessly until you realise that switching to infrared gives you an instant and decisive advantage. 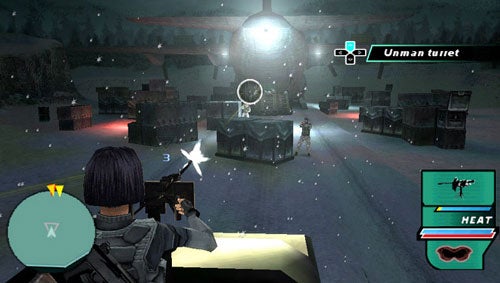 As I said, it’s an excellent game. In fact, it’s easily the best action-adventure on the PSP, and one of the very finest games on Sony’s handheld. So why not an undisputed classic? Well, it’s the extremely linear nature of the game; the way rooms and corridors follow on from one another, with no real freedom or choice. It’s the annoying habit of hitting you with sudden-death trip mines at the end of a long and difficult action sequence – I know you should be punished for not taking care and using your goggles, but that harshly? Probably not. But most of all, it’s that while Syphon Filter: Dark Mirror does an amazing job of bringing the thrills of tactical espionage to the PSP, you can’t help thinking that were you not playing it on a handheld , you’d only be half as impressed. Pitch it up against Splinter Cell: Chaos Theory or MGS2: Sons of Liberty and it wouldn’t quite pass muster, even given the obvious graphical improvements that a PS2 conversion would bring. Don’t get me wrong – this is an exceptional PSP game, but maybe it shows up the problem at the heart of the ‘PS2-quality games in the palm of your hand’ ideal. Unless you create something different and amazing that you would never find on the homebound console, you’ll never make a truly classic game.


A stunning technical achievement and one of the few must-have games on the PSP. However, Dark Mirror doesn’t have the depth or originality of the spy genre’s best, and is a bit too linear for all-time classic status.