As last year’s DiskStation DS409slim proved, Synology knows how to product a decent NAS device. But just in case you thought that product was a fluke the company has done it again with the DiskStation DS410j. Considering its sub-£300 price tag, it packs in an excellent array of features and, importantly, performs admirably. 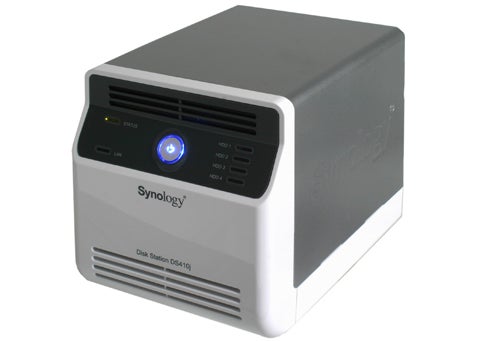 This four bay NAS device doesn’t have the compact dimensions of the DS409slim, but it does have features galore and an attractive price tag to go with them. The chassis might not be amazingly small, but at 230mm x 168mm x 184mm it’s hardly overly imposing either. Certainly the combination of its aluminium casing and white plastic surround looks attractive enough, and the angled front panel makes for easy reading of the systems vital stats, such as hard drive status.


Around the rear are the power input, Gigabit Ethernet port and a pair of USB 2.0 ports. The latter can be used either for connecting a USB storage drive (either for transporting files or augmenting the internal capacity), for sharing a USB printer over your local network, for connecting to a UPS or even for controlling a (compatible) USB webcam using the DS410j. 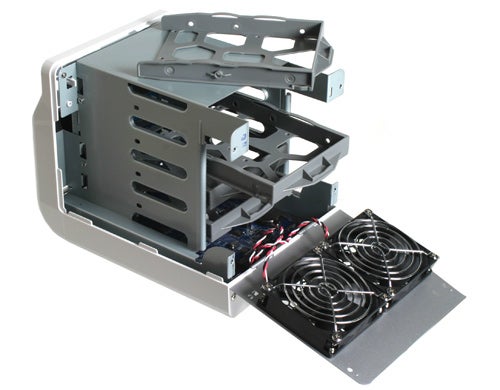 The rear is also home to four thumbscrews which when removed enable the back of the DS410j to be opened, revealing the four drive bays inside. Interestingly these can house both 3.5in and 2.5in hard drives so if you’re feeling really flush you could even use SSDs – even if it would probably be cheaper to hire someone to backup all of your data by hand, in 0s and 1s, on paper.


It’s worth noting that in RAID 1 and RAID 5 configurations, these drives can be upgraded to larger capacity units, without losing data. So far as I am aware, Netgear is the only other manufacturer that facilitates this, so kudos to Synology for implementing that. Be warned that rebuilding volumes is a lengthy process, leaving the NAS out of commission while it’s happening.

The diskless unit I was sent required me to install the firmware before use. Luckily the firmware was included on the disc provided with the device, so it’s hardly a major issue. Also on this disc was the setup wizard needed to install this firmware, as well as Synology Assistant, a PC-based configuration utility for the DS410j.

Arguably more important is the inclusion of Data Replicator 3. Once this has finished taking a full backup it monitors for changes and replicates them in real-time. Just remember to check the “start with Windows” option!


As the DS410j can download files over HTTP, FTP and BitTorrent a piece of software on the installation disc named Download Redirector proves particularly useful. As you might predict, this intercepts downloads started on your PC and hands them over to the NAS to complete. While many NAS devices are able to do this with Torrent files, very few at this price point can also do ‘normal’ downloads. If you often download large files that aren’t available over BitTorrent this should prove an enticing feature.


Where the DS410j really excels is its web interface. Put simply, this is the slickest looking yet also most functional I have seen on any NAS device. By default the home screen shows a ‘Wizard’ layout, which condenses all of the available configuration screens into simpler groups. If that’s too patronising for you, though, then the ‘Complete’ mode will be more appropriate, letting you get on with things unhindered. Just don’t try using an iPhone or iPod touch – it’s possible, but these devices are just too small for it to be practical. 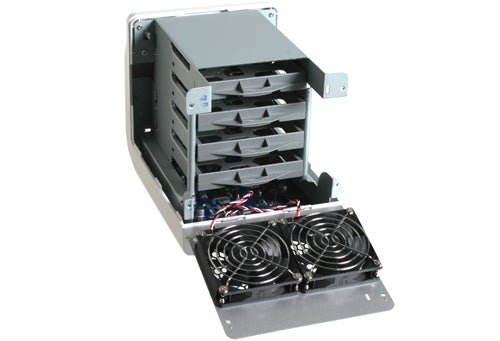 All the usual options, such as setting up volumes and RAID configurations, managing drive partitions and who can access them, and enabling or disabling DLNA and uPnP functionality, are present but Synology has also added a few less common abilities to the DS410j. One of these is a local PHP-capable web server, with a MySQL database also available. While the 800MHz CPU and 128MB of RAM in the system probably wouldn’t handle, say, TrustedReviews’ traffic it should be more than enough for running a personal blog, or small business website, read only by a few people.

Synology offers a couple of plug-ins on its site which could prove useful, too. One of these is the Mail Station add-on, which enables the DS410j to work as a mail server. Combined with the built-in DDNS server this makes it possible to host your personal email from the DS410j, which is pretty nifty. 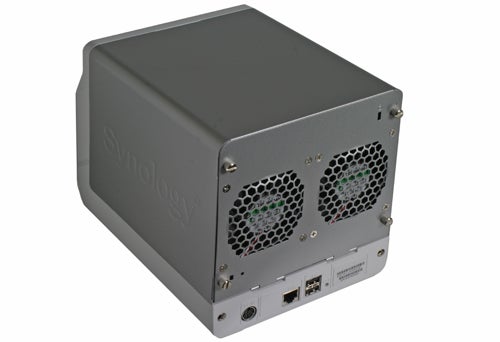 Similarly, the built-in iTunes server can be supplemented by its SqueezeBox equivalent if the former isn’t of much use to you. Better still, these are just the official apps; because the DS410j runs a Linux kernel, if you’re feeling savvy enough you could build your own application to run on the device – an action encouraged by Synology.


In that all important area of transfer speeds the DS410j proves itself admirably. Using a 1GB-odd file (‘source materials.gcf’ from my Steam folder if you must know) I recorded a 28.7MB/s write speed and 48.3MB/s read speed. Obviously that doesn’t make this the fastest NAS device in the world, but it’s in line with its competitors, which is as much as can be expected realistically. 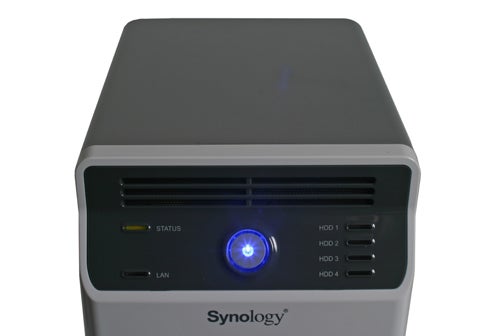 There are no complaints elsewhere. The media server functioned as expected, picking up new files and streaming them to my PlayStation 3 with no issues whatsoever and iTunes on my PC had no problems playing files from the DS410h’s server. That this NAS device works just as well as (if not better than) my ReadyNAS NV at a third of the price just goes to show how far we’ve progressed in the last few years.


The Synology DiskStation DS410j isn’t just feature packed, nor does it just offer great performance. Rather, it does both of these things at an affordable price point and that’s certainly worthy of accolade.