You could be excused for not having heard of Sword of the New World. In fact, you could even be excused if you have heard of it but don’t see any need to get excited. At the moment, between WoW, LOTR Online and Guild Wars, most of us have our fantasy MMORPG needs sewn up. What’s more, Sword of the New World is a Korean import, and most fans of the genre will know what that means. 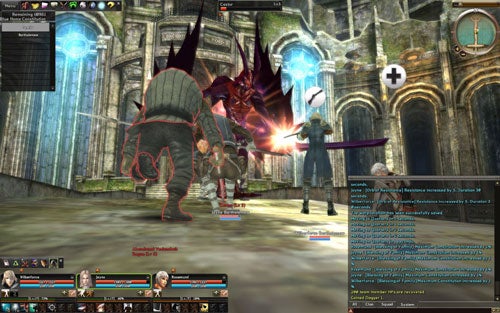 As with food and music, Korean tastes in the MMO arena differ hugely from our own. They like to control things point-and-click style with the mouse; we like to move using the time-honoured WASD combination. They like hours of repetitive monster-bashing in pursuit of experience points; we like story-driven quests. They only want to level up so that they can beat seven shades of excrement out of each other in PvP (Player vs Player) competitions; we just want to show off our bulging muscles and our exotic armour to our guild-mates. As previous attempts to bring over hot imports have shown (Lineage II, RF Online, Archlord) the Korean mentality only appeals to a limited, hardcore Western audience. Most of us like our games without the grind. 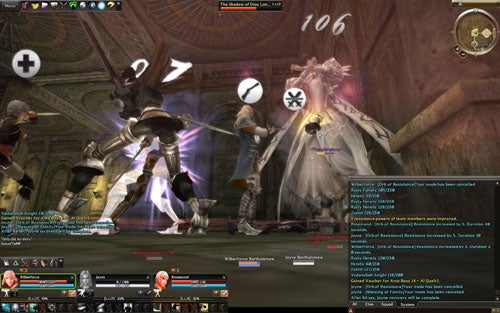 To be honest, my first half-hour in Sword of the New World didn’t give me hope for anything more this time around. Point-and-click controls and a dumb, floating, right-mouse button controlled camera give the game the unfortunate feel of a B-grade offline RPG. The game seems full of pitiful attempts to build atmosphere, not to mention some rotten translations that constantly have you asking “What? Why? How? The game seems disjointed, and it’s unclear where you have to go and what you have to do. As I struggled through the tutorial missions one July morning, I thought K2 Networks would be lucky if I bothered playing past the first hour.


At approximately 1.30am that night the joke was on me. Once you get into it – and it does take a little getting into – Sword of the New World is a refreshingly different fantasy MMO. 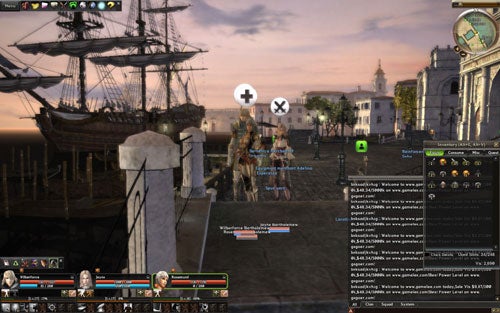 The setting certainly helps. Instead of the usual pseudo-medieval/elves and goblins/dark forces on the rise shtick, we have a game that takes the European colonization of the Americas and gives it a distinctive fantasy spin. Sword’s heroes are colonists and explorers, working for a Spanish-inspired empire and fighting both the hostile indigenous creatures rattling around the new continent, plus forces of corruption within the empire’s ranks. The major cities are glorious, baroque creations, while there’s enough great plain and dense jungle outside to make a compelling wilderness. Needless to say, the game also packs in a fine range of mysterious tombs and dungeons.

All of this is portrayed via one of the more spectacular MMO graphics engines around at the moment, putting Sword on a par with LOTR Online and Guild Wars in the eye-candy stakes. Some locations are a little flat and poorly textured, but when the lighting, the shader effects and all that luxurious architectural detail comes together, you get some fairly breathtaking vistas. The anime-style characters, meanwhile, are like something you’d get in a Square-Enix game, complete with ludicrously ornate costumes and high-rise, new romantic hairdos. It’s tempting to spend hours in the character creation screens just to see the different class and costume combinations at work. 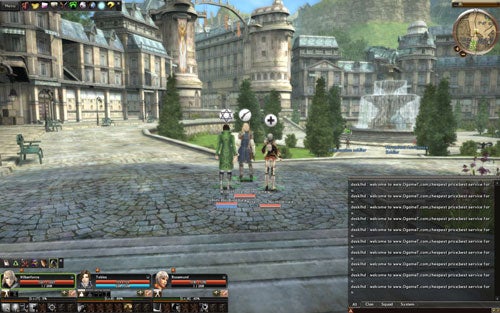 And it’s during character creation that the game’s second distinctive factor comes into play. In Sword you don’t just play as a single character, but as a family. You begin by creating up to four characters, preferably of different classes, and all sharing a single surname. There are no races bar human, but the five classes – fighter, wizard, scout, elementalist and musketeer – have a choice of costumes and can later be customised via stances and skills (more of this later). Costumes become particularly important because, unlike other MMOs where finding or earning new gear is a key part of giving your character identity, in Sword you wear the same suit of clothes no matter what armour you employ. You can add hats and change costumes later on, but really that’s about it. 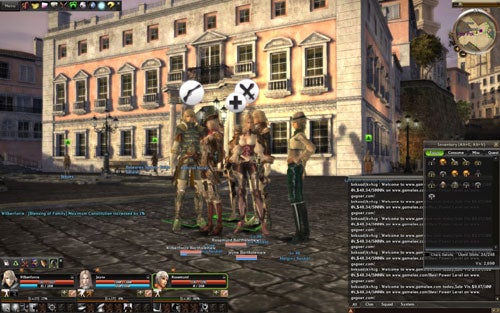 The reason why you need more than one character is that in Sword you control a three-strong party of pioneers, which you can juggle at any time by returning to the Quarters screen and adding or excluding members. The advantage of this is that you can create a balanced party of your own without needing to rely on other players. Kick off a party with a fighter, a wizard and a scout and you have all you need to tackle most quests and missions in the early part of the game. Now, you might expect the downside to be complexity, but in fact the opposite is true. Most of the time you can take direct control of the party leader and the other two members will trail around killing anything hostile that gets too close and adding medical and magical support. You can also switch leaders at will and use shift-click combinations to, say, tell your party to go there and smash or grab anything in their path. With only a few inventory and skill screens to tackle, Sword is actually a fairly speedy, streamlined MMO to play.

It has to be, because the game’s true defining feature is its pace. I’ve played other combat-driven MMOs, but Sword is surprisingly relentless, throwing wave after wave of respawning critters at you in a manner that leaves WoW and Guild Wars looking tame. The combination of the multi-character control, relatively automated combat (just click to start hitting) and the constant aggro results in a game that feels like a bizarre blend of Guild Wars, Final Fantasy and Diablo. The addictive appeal is straight from the latter; fight to gain gold and experience, level up and find or buy new gear, then go off and fight some more. Repeat until you’re too dog-tired to play any more. 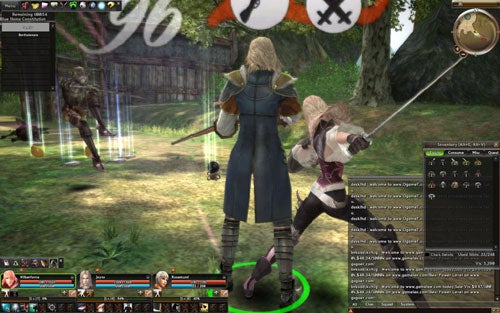 Of course, there is a little more to it than that. The key to despatching mobs of monsters, particularly once you start encountering more difficult foes, is to go beyond the single-click auto attack and make the most of your skills and stances. As in most MMOs your character can learn and use key skills to attack, heal or protect against enemy attacks, but the skills and weapons you can use also depend on your stance. For a fighter to use the sabre, for instance, they first have to learn the mid-guard stance, but once learnt they gain the use of a new set of skills which can then be levelled up as the fighter levels up and earns skill points. Stances can be learnt from exercise books, available in all major towns, but these can only be used once the character reaches an appropriate level. Weapons too are only usable once characters reach specific levels. If all of this sounds like another mechanism to keep you bopping ‘til you drop, then it certainly has that effect. 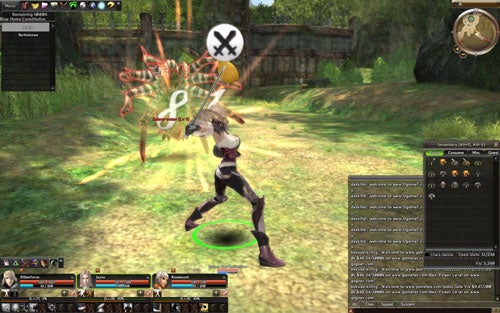 This is where things get tricky for the erstwhile reviewer. In many respects Sword is a woefully dumb MMO. The quests are painfully simple, combat is repetitive, and it’s entirely possible to leave your whole party on auto-pilot in the middle of a dungeon, go away, have a cup of tea, and come back to find them still fighting. Sword doesn’t have the narrative depth of WoW, LOTR Online or even Guild Wars, and the real downside of its party system is that it actively discourages any meaningful social interaction, at least in the lower levels where I’ve been playing. You might play with other players on an ad-hoc basis, particularly in the more packed dungeon chambers where it’s easy for a single party to get swamped, but you can’t say that you’re really teaming up with them.

Yet in many ways Sword is also the smartest hack-and-slash MMO I’ve played. It doesn’t punish you for dying, it works hard to keep the dull bits to a minimum and it gets you back to the action as rapidly as possible. There are instant teleport features built into some quests, plus a system of warp points between key locations and a readily available means of saving specific dungeon or wilderness locations and teleport to them instantly. This comes in extremely handy if you need to return to town quickly to rebuild health or re-equip, but don’t want to trek through a cavalcade of creatures on your way back. Once you get the hang of its quirks and eccentricities, Sword gives you very little to distract you from the task in hand. And with missions that come down to killing 250 dungeon-dwelling hunchbacks in return for a certificate, you pretty much know what that task entails. 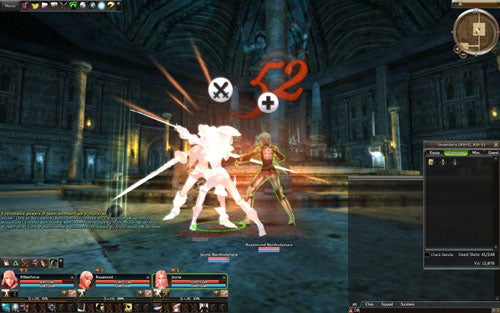 That sort of thing isn’t for everyone. Like Diablo, there’s something about Sword that makes it slightly tedious yet utterly compulsive at the same time, and all that keeps it going is its attractive looks, a growing sense of family pride and its sheer, unstoppable energy. The great thing is, however, that you don’t actually need to part with the cash to make up your own mind. While there will be a retail release later this month, you can simply download the game now, play until your characters hit level 20 for free, and decide whether to go on with the monthly sub from there ($8.95, or roughly £4). Sword isn’t the year’s best fantasy MMO by any means – and we still have Age of Conan and Warhammer Online to come – nor is it the ideal starting point for novices. If, however, you just fancy something different or a good, old Diablo-style ruck with some chums, then it does the job in its own weird style.


One Korean MMO import that you shouldn’t be scared to sample. It might be a little dumb and combat driven for some tastes, but the relentless hack-and-slash action will keep you playing long past any sensible bedtime.