Let’s face it – in today’s game world, kids often get a raw deal. Every Christmas and summer brings a deluge of games, often based on child-friendly IPs or CGI animated movies, and most of them are rubbish. Think ropey 3D platformers, dodgy kart racers, woeful scrolling action games, second-rate graphics and miniscule lifespans. And this is a shame, because it doesn’t just mean that someone somewhere is making the patronising assumption that kid’s don’t demand or deserve decent games, it also means that – if you’re a parent – you don’t get to share a great game with your family. Of course, you know and I know that you bought that Xbox 360 to play Oblivion and Gears of War yourself, but wouldn’t it be nice to pretend that it was a family purchase? 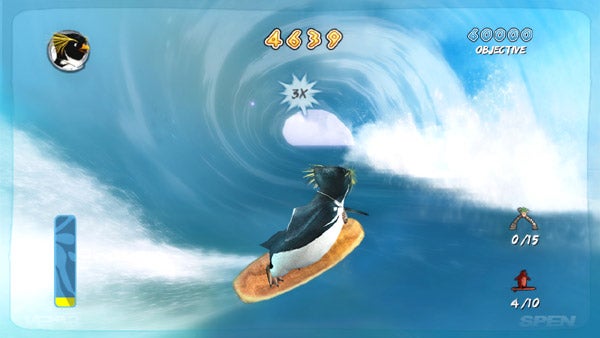 Hollywood has been getting this right for a while now, with films like The Incredibles or Shrek that tick all the kids’ boxes, but prove just as entertaining for grown ups too. The CGI cartoon wizards at Pixar and Dreamworks realised that, by making the movie work on different levels, they broadened – not weakened – their appeal. And to be fair, some games companies understand this too. Think of the jewels of Nintendo’s first-party output, or Ratchet and Clank, the first few Crash and Spyro games or Kingdom Hearts II. These are games packed with child-friendly content and style, but on another level they also boast sophisticated game mechanics, a high level of visual polish and real longevity. These are games you might buy for the kids, but you end up playing yourself – which is exactly the way that it should be.


For the first few hours of playing Surf’s Up, I had hopes that it was that sort of title. 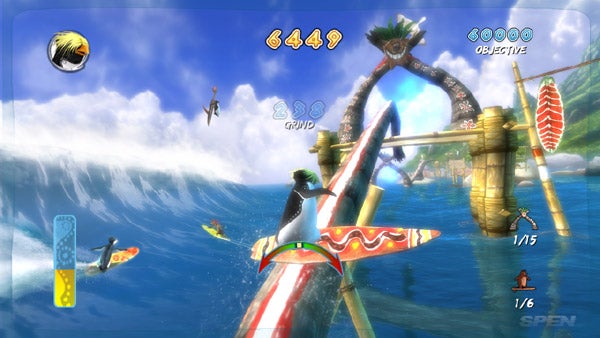 It helps the CGI summer movie it is based on could have been built with games in mind. Surfing penguins are a natural fit for the extreme sports/stunt genre pioneered by the Tony Hawks and SSX titles, and like the much-admired Disney Extreme Skate Adventure – which was built on the Tony Hawks engine – Surf’s Up is basically a junior take on the style. What it basically comes down to is a series of surfing competitions, played out across locations ranging from the iceberg-menace Antarctic to the beaches of a Polynesian paradise.

Your penguin (or chicken) of choice hits a huge breaker rolling along the left or right side of the screen, and you can use this as a platform to build up speed and pull-off astonishing tricks. Ride the crest, and you can leap off to perform spins, grabs and all kinds of show-stopping stunts through combinations of the left analogue stick and the X and B buttons. You can also slalom between icebergs and rocks or use some as rails to grind on, while pulling off freestyle spins and rolls using the right analogue stick. 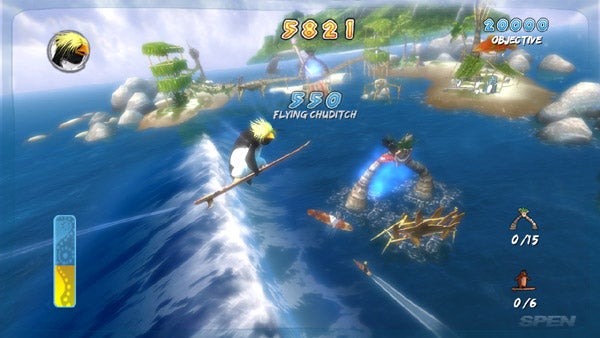 Each ‘wave’ doles out several awards for different achievements. You can win trophies for passing through gates or by breaking specific score thresholds. The trick to the former is speed: by pulling off successful stunts you build up a boost gauge, and by activating boost you can make it through gates before the tide cuts them off. However, if you’re after a high score the trick is to fill the gauge right to the top, at which point you can activate a ‘stoked’ mode. Hit the top of the wave, whack the Y button, and it all goes slow-mo, allowing you to pull of particularly spectacular stunts and gather vast quantities of points within a matter of seconds.


Combine stoked mode with the multiplier bonuses floating around on the ocean, and it’s really not that tricky to look like a champ. What’s more, some waves also turn periodically into tubes. Hit stoked mode here (the bar actually fills up automatically) and you can spin around inside the wave by hitting button combinations as prompted. 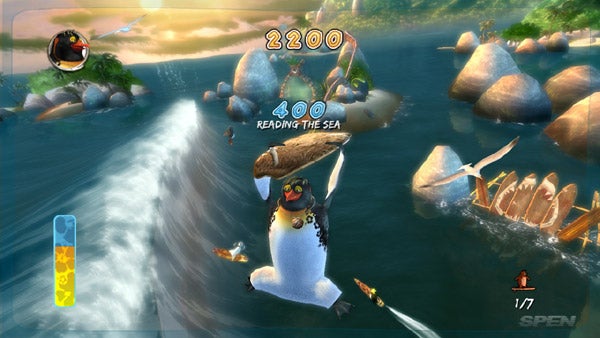 The surprising thing is how fluid and accomplished the actual gameplay is. Play Surf’s Up and it’s actually quite hard not to have fun. Your kids will love it, because they can pick up and play it without having too many problems, and you’ll love it because, with only a modicum of skill, you can still fill up the guage and make it look like you’re an absolute stunt king. I’m terrible at tricks in SSX and Tony Hawks, but play Surf’s Up and I’m like the Patrick Swayze’s Bodhi in Point Break.


With plenty of scenery to work with or avoid on each stage, different routes you can take and multiple challenges per wave, there’s plenty of reason to replay each several times in a row, and even the music is pretty good. I doubt Elbow had a penguin surfing game in mind when they wrote the majestic Forget Myself, but it works surprisingly well on the soundtrack. For a while, Surf’s Up was my surprise winner of the summer. Or so I thought…

So I thought, because sadly Surf’s Up still shows signs of the typical slapdash mentality to children’s games. I suppose I should have taken a hint from the graphics. There’s nothing particularly wrong with them. They’re nice. They’re cartoony. On the 360, PC and PS3 you get some nice lighting effects and the characters are well modelled, well animated and bursting with personality. All the same, you can’t help but think that this is a PS2 game given the traditional high-def boost. 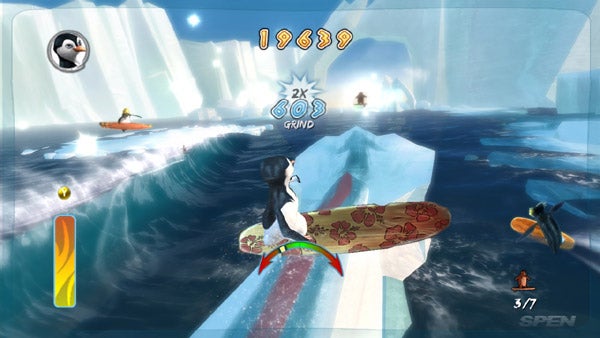 If you get a chance, take a look at adverts for the movie and check out the stunning, translucent, super-realistic waves. Now look at their equivalents in the game. Maybe we can’t expect that sort of ray-traced, refractive, fresnel-frosted goodness in real-time on current console hardware, but we’ve certainly seen better water effects than this. You can’t help but feel that whoever put the Unreal engine to work on this was either limited in terms of time and money, or maybe just a little bit lazy.


Secondly, I have to wonder why it’s still generally felt that kids don’t deserve online play. It’s understandable for a PS2 version, but why on the 360, the PS3 and Wii? We get split-screen, 4 player action, but no online multiplayer, and not even an online scoreboard where we can check our efforts against the competition. We take this sort of thing for granted in grown-up games. Why shouldn’t kids get the same treatment? 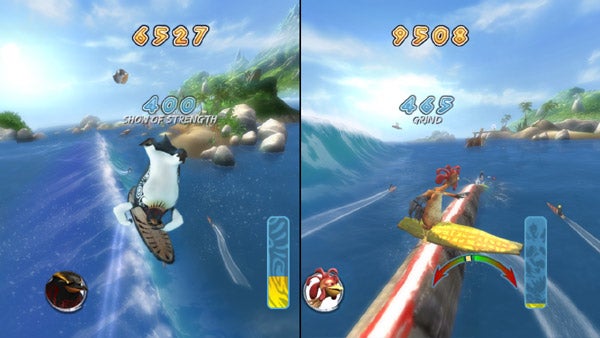 My most serious complaint, however, is that Surf’s Up is a game with a horribly limited lifespan. It’s great that the game starts easy, but it never really develops. Get the basic principles right, upgrade your surfboard and character as more options become unlocked, and you can swan through the entire game in three or four hours.


You may be left with a few extras to unlock and the final hidden challenge to complete, but even these won’t take you that long. I know, it’s a kids’ game, but have you seen any kids playing lately? My wife’s nephew polishes off boss battles that take me an hour on his third or fourth go! Trust me: they don’t need that much help. 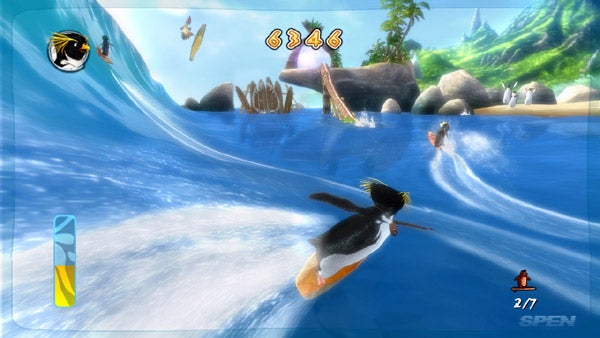 This is a real shame, because Surf’s Up is an awful lot of fun while it lasts. If it went on for twice the distance, had online play and – like Disney’s Extreme Skate Adventure – an advanced play mode, I’d be pushing it as the perfect game to play with children, or as a guilty pleasure you might like to sample for yourself. As it is, however, it doesn’t deliver fun for long enough for you or any offspring to get your money’s worth.


An entertaining ride that’s over far too soon. The lack of ‘wow’ factor and online features is also disappointing on the 360, PC and PS3. Enjoy the ‘chowder’, penguin dudes.