It’s a fair assumption that USB flash drives are a dull affair. Sure some, like the Corsair Voyager GT, offer rugged casings, others such as the Lexar JumpDrive Secure II Plus 4GB add a capacity meter to the exterior, but for all intents and purposes they’re all still flash drives. The fundamental facts remain the same, you put data on them, you carry it with you and you take that data off elsewhere. 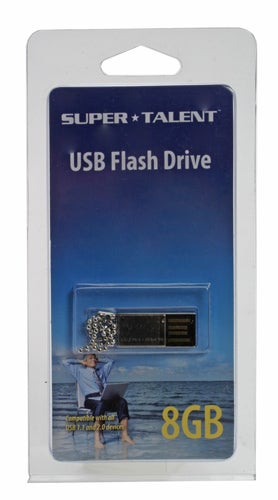 So while rubberised cases and built-in card readers are great, and undoubtedly have their place, what many of us want is just a simple, easy to use, portable flash drive with a decent amount of storage. Kudos, then, to Super Talent and its recently announced Pico Series of USB flash drives, which manage just that.


For a start, the 8GB Pico-C version, at which I am looking today, only costs around £22. For that trifling amount you’re getting 8GB of a rugged and water-resistant storage in a truly diminutive size. Measuring just 31.3 x 12.4 x 3.4mm and weighing less than six grams the biggest worry isn’t that the drive is too big, but that it’s almost too small. Luckily there is a lanyard attachment which I immediately fastened to my keychain for fear of loosing the drive. 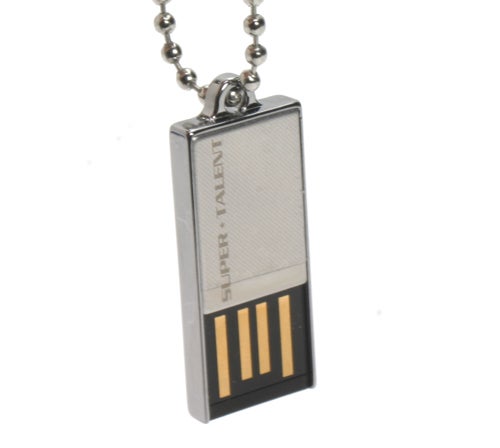 Don’t think for a minute that I’m complaining about the tiny size of the drive though, far from it. Tiny enough even to fit into a wallet, or purse, the 8GB Pico-C USB Flash Drive can viably be carried around constantly, without becoming an annoyance.


Alternatively you could put that lanyard attachment on your phone to good use and use it to keep your flash drive safe, as long as you’re not too worried about the potential for damaging your mobile. And importantly it’s made of shiny metal so it looks cool too! Vice versa, there should be no concerns as although the exposed contacts may look venerable, unless you’re truly trying to cause damage, none is likely to occur.

Super Talent has given the Pico-C drives an additional trick too, rating them as waterproof. In reality all flash drives should survive submersion as long as they’re dried out before being used, but having the manufacturers reassurance that a quick dunking in H2O, or more likely a C8H10N4O2-infused liquid, won’t lead to your flash drive’s premature death. 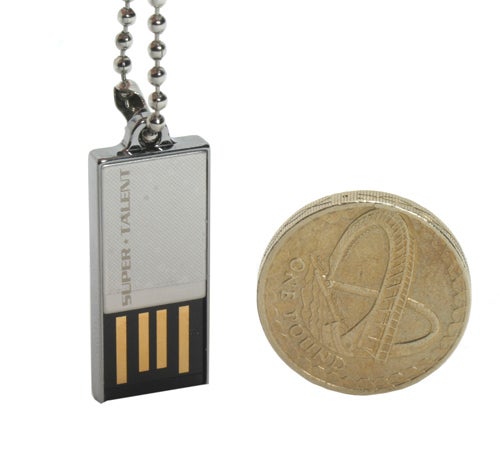 Such claims need testing, and I was pleased to see that after copying a few files onto the drive before “accidentally” dropping it into a glass of water caused absolutely no damage. All that I needed to do was give the drive a quick wipe on my jumper to dry it off and plug it in – simplicity itself.


Adding to this functionality the drive also offers a pretty decent level of performance. Using Vista Service Pack 1 x64 and a 726MB file, the 8GB drive averaged a write speed of 8.3MB/s and a read speed of 23.6MB/s. Using a folder comprising 150-odd MB of various Word documents and images, slightly slower 5.2MB/s write and 21.4MB/s read speeds were obtained.

Subjectively the drive was just fast enough that transferring files doesn’t take so long as to cause real frustration, but we’d always like to see faster flash chips being used – especially on the write speed front. Considering the teeny tiny size and the comparatively huge capacity, though, the speed is more than accetable. Last in this area, while you probably wouldn’t use a drive like this for Windows ReadyBoost I can report that it is compatible should you wish to do so.


When all is said and done Super Talent isn’t selling this drive off the back of its performance. The unique selling point is clearly the cramming of a large storage capacity into such impressively small dimensions. Add in the attractive price and it’s clear that the 8GB Pico Drive is a real winner. What more can I say?