Exclusive to Nintendo 3DS
Whatever you think of the new Super Smash Bros. on 3DS, it’s hard to fault Nintendo for effort. It’s not only squeezed the full-sized Super Smash Bros. experience onto its handheld, but jammed in a massive roster of characters, online and local multiplayer, an extensive range of bonus game modes and too many unlockables to mention. Considering that it’s part of a series that’s often criticised for being superficial, you can’t complain that Super Smash Bros. 3DS falls down on depth – at least not on the content side of things. There are countless hours of gameplay to be found here.

In fact, the charge of superficiality isn’t deserved. Super Smash Bros. always looks simple, with two to four players battling on a simple 2D platform stage, working to do enough damage to the other players that they can be smacked out of the screen space and a knock-out notched up. Each player takes on the role of a popular Nintendo star, and each has a range of attacks, special attacks, jumps, rolls and blocks/shields particular to that character. What’s more, each stage has its own peculiarities, dangers and gizmos, while crates and weapons may be dropped into the fray, giving you the opportunity to wallop your opponents with even more ferocity. It looks like unmediated button-mashing chaos. In some cases, it plays like it as well. 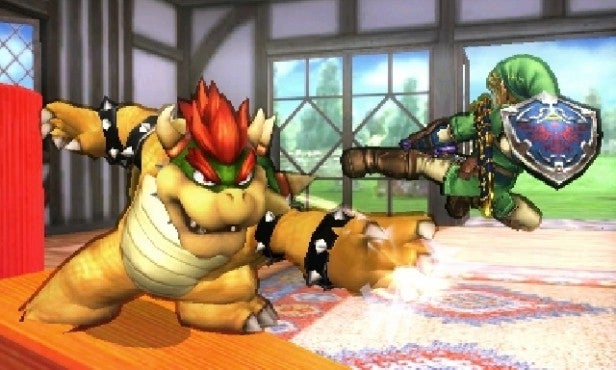 Yet serious Smash Bros. players know that there’s more to the game than that. Without the complex button-combos and block-and-counter mechanics of conventional fighters, the action comes down much more to positioning and timing; where you place yourself in the level, how you get yourself near to your opponents, and how carefully you time the different combinations of analogue-stick presses and button jabs. Serious Smash fans know the importance of a good, tactical smash move, and how to recover in the air when you’re about to fly off-screen. Serious Smash fans have the strengths and weaknesses of the different characters nailed down.

This 3DS version certainly gives them a lot to work with, with 39 fighters available from the start and 12 more hidden in the game. Along with stalwarts like Mario, Bowser, Link, Donkey Kong and Metroid’s Samus you’ll find Kid Icarus’s Pit and Palutena, not to mention Pac-Man, Mega Man and Greninja from Pokemon, plus the Wii Fit trainer and an Animal Crossing villager. Every character is customisable through a range of outfits, custom special moves and hats, and the game even throws in the option to create and/or bring in your own Mii characters, with a choice of gunner, swordsman and brawler move sets. 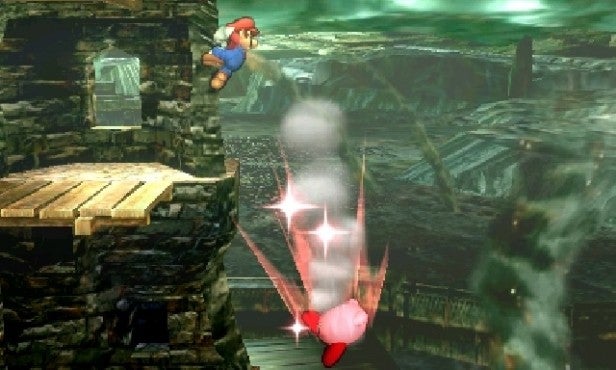 The stages are wonderful, too, covering not just the expected Nintendo properties – Mario, Zelda, Metroid, Yoshi’s Island – but some unexpected options, including Sonic, Animal Crossing and even Nintendogs. The use of 3D is exemplary throughout.

While the core Smash mode remains the heart of Super Smash Bros, the game also comes jam-packed with bonus games and variations. You can try out different heroes and move sets in the training mode, go through a vintage-style Smash Bros. tournament, or take a hero for a trip through Nintendo history, battling a different era of characters on each stage. You can also try a Smash Run, where you and your opponents battle familiar baddies across a large, scrolling stage, winning upgrades you can then put to good use in a final brawl. 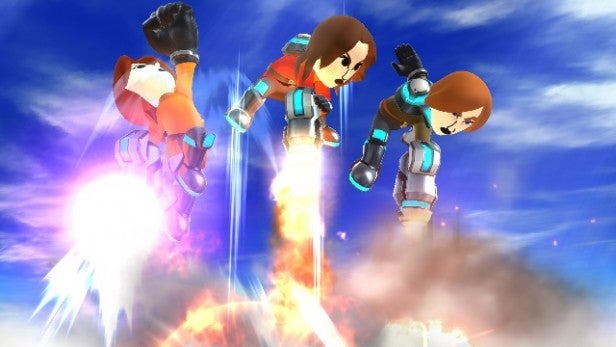 Perhaps the most exciting and useful modes are Target Smash and Home Run. The first is basically Angry Birds meets Smash Bros, as you batter a bomb then deliver a smash to send it flying towards a collapsible structure. The more damage you do, the higher your score. Home Run, meanwhile, sees you smash four shades of stuffing out of a sandbag before smashing it as far as possible. These are just the kind of fun, addictive bonus game that Nintendo does so well, but they also have a genuine purpose; acclimating newbie players to the mechanics of smashing, and giving more experienced players practice to help them get it right. It’s just a shame there’s no tutorial to be found.

Even the online play turns out to be solid. You can choose to fight ‘for glory’ or ‘for fun’, and the game does a fine job of matchmaking you with other players, with a nice practice area to warm up in while everyone messes around with character choices and all devices sync. Some matches are laggy, but the majority seem pretty smooth, and while some players are clearly better than others, Smash Bros. just isn’t the kind of game where a single player dominates. 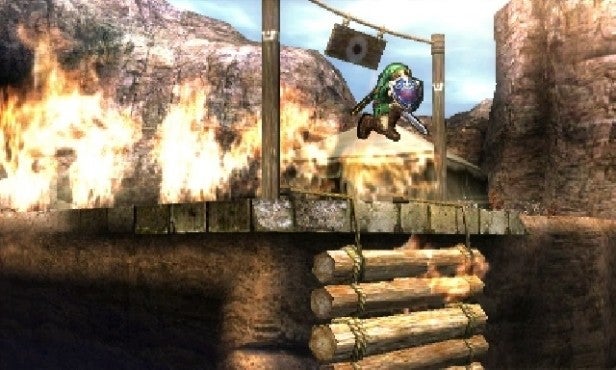 In short, there’s a lot to enjoy here, and Nintendo has done a fine job of bringing the feel of Smash Bros to the 3DS. Why, then, don’t we like it more than we do?

Partly it’s a question of hardware. Smash Bros. is a game where a lot of small figures do a lot of jumping and smacking from a zoomed-out vantage point, and despite Nintendo’s best efforts – a zooming camera, cell-shaded outlines for the characters – it’s very hard to see what’s going on. We were playing on a 3DS XL and we found it a struggle. Goodness knows how anyone will cope on the smaller 3DS or 2DS screens. And while the 3D effect helps separate things out, there’s only so much it can do. 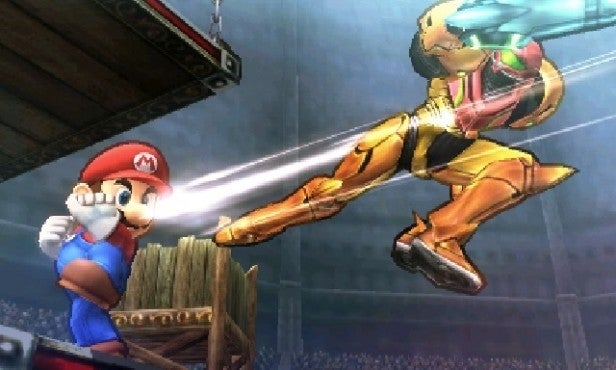 More importantly, it’s a question of why we play Smash Bros. It’s a game best enjoyed on a big TV with people you know well; that’s where the humour, the rivalries, the mindless vendettas, the sudden fluked victories and last-minute scrambles kick in. Playing it against CPU players or strangers online is fun, but not as much fun as the real deal. Of course, you can play Super Smash Bros. 3DS online against friends, but it’s the difference between having a conversation on the phone and chatting in person. It’s alright, but still not quite the same.

The best case scenario is local multiplayer, giving you a great way to practice Super Smash Bros. when you’re on your tod, and a fine way to fight when you’re with like-minded individuals. If that’s open to you, feel free to add a point to the score and buy in confidence. The same goes if you already love Super Smash Bros., or if you’re the kind of hardcore Nintendo fan who wants everything it does. The rest of us, however? For all its charm, nostalgia and endless generosity, it’s a solid 3DS game rather than a great one. Try the demo and give it a spin for yourself, but our feeling is that if you want to play Super Smash Bros, you’re better off waiting for the Wii U version to roll around.

Verdict
With a fantastic roster of characters, strong graphics and gameplay and a grab-bag of bonus modes, this is as good a Smash Bros. as you could hope for on the 3DS. All the same, you’re left wondering if this combination of game and platform is a good enough fit. Play it with friends online or through local co-op and you’re guaranteed to have a good time, but this 3DS version can’t reach the heights of console Smash Bros, even when it bends over backwards to try.