Sumvision produces an assortment of different media players ranging from internet connected set-top boxes running Android to smaller, stand alone players such as this one, the Cyclone Micro 3.

Available for £44.99 from Advancedmp3players.co.uk, who supplied our sample, the Cyclone Micro 3, as you can probably guess from the name, is the third iteration of Sumvision’s Micro player. The first model only offered standard definition playback, the second added 1080p support, while this model also supports 1080p videos, but adds 8GB of onboard storage into the mix. 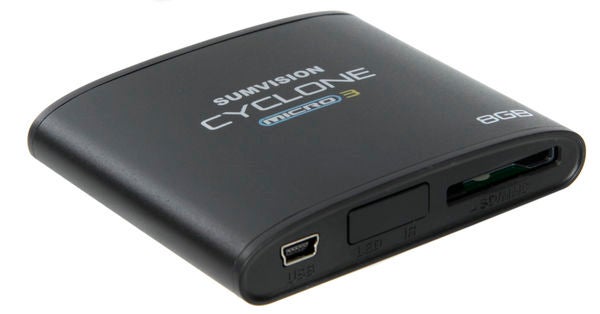 This player really does live up to its ‘micro’ billing, because it’s absolutely tiny. In fact, the main device is so small that you can easily fit it in a shirt or coat pocket. The top of the unit is curved slightly and the left and right edges are rounded to give it a more feminine shape. It’s available in either black or white. We had the black one in for review and the matte finish does a good job of stopping the unit from showing up finger prints.

The front of the Micro 3 has an infrared window in the middle for picking up commands from the remote and this is flanked by a full-sized SD card slot on the right and a mini USB port on the left. Around the back you’ll find the HDMI port, along with minijack digital audio and AV outputs and the power socket. That’s your lot as far as connections go. This player doesn’t have Ethernet or Wi-Fi, so you can’t hook it into your network. Instead it’s designed to be used as a standalone player.

The Micro 3 comes with a USB to mini power plug lead. This plugs into a USB socket on the supplied power adapter or if your TV has a USB port you can use the lead to power the player from that port and dispense with the power adaptor altogether.

The mini USB port on the front allows you to connect the player to your PC or laptop to transfer files to its internal 8GB of memory. When you attach it to your computer it shows up as an external drive, so you can just drag and drop files on to it. This port can also be used to hook up hard drives or memory keys to the Micro 3, but to do this you need to use the short mini USB to full-sized host USB adaptor cable that’s supplied in the box. This is a tad awkward and it would have been preferable to have a second full-sized host USB port so you didn’t have to use this adaptor cable at all. Also, it’s a bit annoying that you can’t copy files directly from USB devices or SD cards to the player’s internal memory – instead you always have to hook it up to a computer to copy files into this memory. 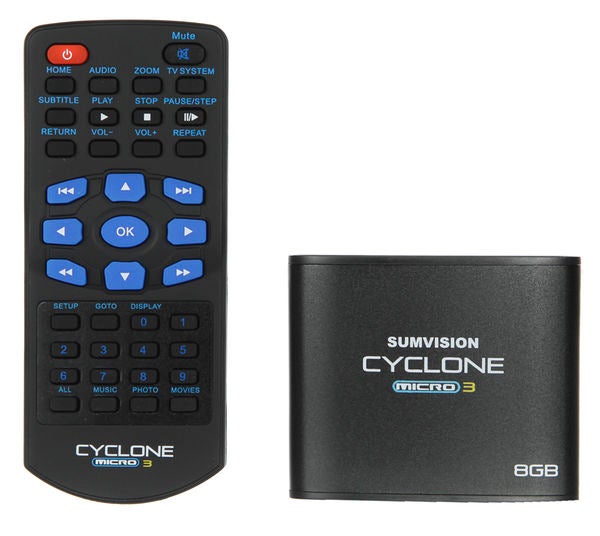 The Micro 3 uses the same remote as the previous model. The remote is relatively small measuring 12.5cm long and 5.3cm wide. It’s quite thin too, at just 1cm. Thankfully, unlike the remotes that come with a lot of portable players it doesn’t use membrane buttons, but instead has normal rubber ones. However, the remote is very directional and isn’t quite as responsive as it should be. As a result, you often find yourself having to move it around slightly to get a better line of sight to the player.

The remote’s layout isn’t the most logical, either. The play, stop and pause buttons are lined up on a row towards the top, while the fast forward, rewind and track skip buttons are positioned on the cursor pad towards the middle of the remote. It would have been more sensible for all the transport controls to be grouped together in one location.

The user interface on the Sumvision Cyclone Micro 3 has had a minor re-jig compared to that on the previous Micro players. It now shows background images on the various menu pages. However, the menu screens remain quite basic. The home screen simply has links to take you to the files on the internal storage, USB drives or the memory card slot, and beneath this there’s a link to the set-up menu. In the set-up menu you can change stuff like the video output resolution or choose to have audio routed to the digital output for surround sound, instead of it just getting routed directly to your TV.

Selecting the internal storage, memory card or USB drive in the menu takes you to a file browser-type screen where you can choose the media that you want to play. You can sort your files by music, photos or movies using the dedicated buttons on the bottom of the remote, but these are really just file-type filters, that hide the other media types in the file list. Nevertheless, moving through large libraries of files on USB drives is still pretty quick as you can page up and down the file list using the track skip buttons. 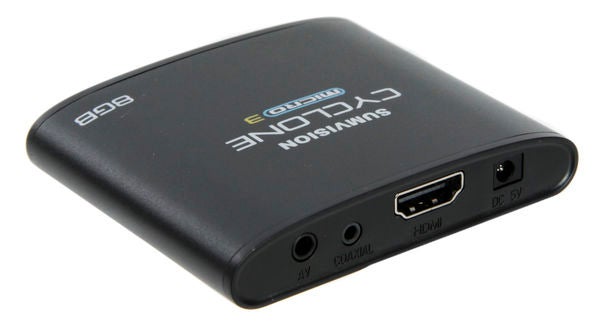 The big advantage of the Micro 3 over many of the other cheap players we’ve used is the sheer range of file types that it supports. On the picture side it can be used to view JPEG, BMP, PNG and GIF files and for music it supports MP3, FLAC, WMA and OGG files. It’s the video support that’s most impressive, though. The long list of formats supported includes H.264, H.263, WMV, Xvid, RMVB, MPEG1, MPEG2, MPEG4, MKV and MOV, and it’ll play most of these at resolutions of up to 1920 x 1080 at 30fps.

During our testing of the player, we chucked a large number of files at it in a variety of different formats and it managed to play every one of them without any problems. Video quality was also remarkably crisp and clean for such a budget machine. Also, unlike a lot of these cheaper players it can also downmix DTS and AC3 audio soundtracks to stereo and output them to your TV via either HDMI or its analogue audio outputs. 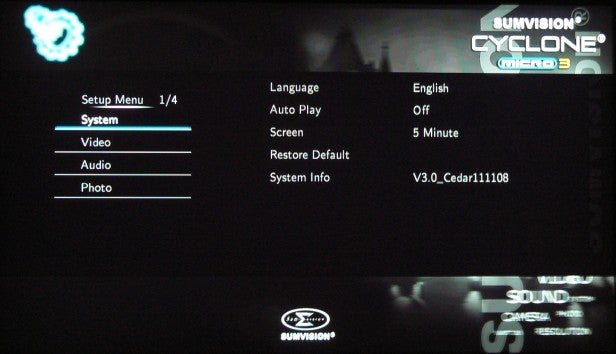 The fast forward and rewind controls are also very responsive and you can skip through movies at speeds from x1.5 up to x32. Using the Goto button on the remote allows you to jump directly to a specific time in a video by typing in a time manually via the remote’s keypad.  Another neat feature is that if you’re watching a video and stop before the end, when you load that video up again the player will remember where you left off and ask you whether you want to resume playback or instead start again from the beginning. Subtitles are also supported in SSA, SUB, SRT formats and you can change the size and colour of the subtitle to make them more legible on your telly.

Unfortunately, the music playing features are very limited. Basically, you can just select a file of folder of tunes that you want to play and that’s it. It doesn’t sort tracks by artist or album name, and it also lacks any support for playlists or album art. 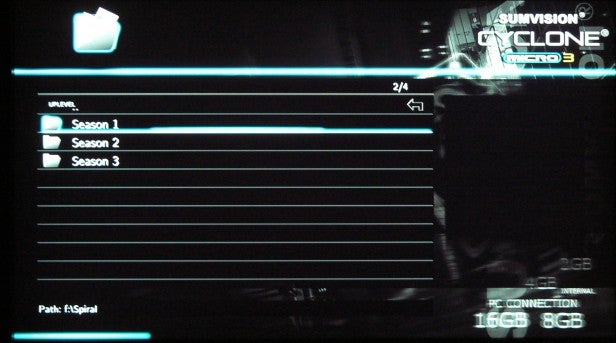 The photo mode is a little bit more advanced, though. The player shows preview thumbnails of images as you select them in the file browser and if you add an MP3 into a picture folder it will be used as the background music during slideshows as long as you turn this feature on in the settings menu. When the Micro 3 is showing slide shows it also has a number of different transition effects that it cycles through to give your slideshows a bit more impact.

Verdict
The Cyclone Micro 3 really does punch above its weight when it comes to movie playback, simply because it plays lots of different formats so flawlessly while also being able to downmix DTS and AC3 soundtracks for stereo output.  Sure, the remote could be better and the user interface could be a bit more refined, but thanks to that robust file format support we still think it’s one of the best, budget standalone media players around.