Steganos's VPN service is reliable but conspicuously slow. However, there's a seven-day unlimited free trial available without registration, as well as a 2GB free service under the OkayFreedom brand, both of which warrant extra attention.

Steganos operates two VPN brands, both of which use the same infrastructure and have the same basic security policies: mySteganos Online Shield VPN and OkayFreedom.

MySteganos Online Shield allows five simultaneous connections from a variety of devices, while OkayFreedom is a free single-device VPN service for Windows PCs, which is also available as an ad-supported, 2GB per month free service. (See our roundup of the best free VPNs.)

An annual mySteganos Online Shield subscription costs £40.62, with a two-year subscription at £73.12 and a monthly option for £6.49.

OkayFreedom provides only 2GB per month in exchange for displaying some adverts in your browser, but you can use it whenever you like. You can also subscribe for £29.95 per year for a single device. That’s not an awful price, but you can subscribe to Private Internet Access for a much faster multi-device service for just a couple of quid more.

Steganos is one of only a handful of reputable VPN providers that still offers a full, unlimited seven-day free trial without registration. This is particularly worthwhile if you’re setting up a system and need a VPN in a hurry, since you can simply download Steganos’s installer, run it and you’re immediately ready to go.

The mySteganos Online Shield client is reasonably polished and easy to use, with 23 endpoint locations and a variety of useful security features. Sliders allow you to quickly enable and disable ad-blocking, tracking, automatic cookie erasure and browser ID string anonymisation.

A handful of advanced settings allows you to control whether the client connects at log-on time, add exceptions to the cookie-clearing tools, add VPN exceptions for outgoing email. You also have the ability to disable the on-by-default VPN kill switch to prevent unencrypted traffic from being sent across your standard internet connection if the link to the VPN endpoint drops.

Although it uses OpenVPN as standard, you’re limited to using Steganos’s official Windows, macOS, Android and iOS apps on up to five computers, tablets or smartphones, with no support for other operating systems or devices.

Germany isn’t the best country for a company to be headquartered in legislative terms, but mySteganos and OkayFreedom advertise themselves as privacy-focused and have a no-logging policy. The company states that “both services interweave metadata of a huge number of users in a way that cannot be untangled. Therefore, an individual user cannot be identified with one IP address and personal data can neither be determined nor passed to state or police.” German law requires ISPs to retain traffic metadata for 10 weeks, but the implication here is that no useful metadata can be extracted. 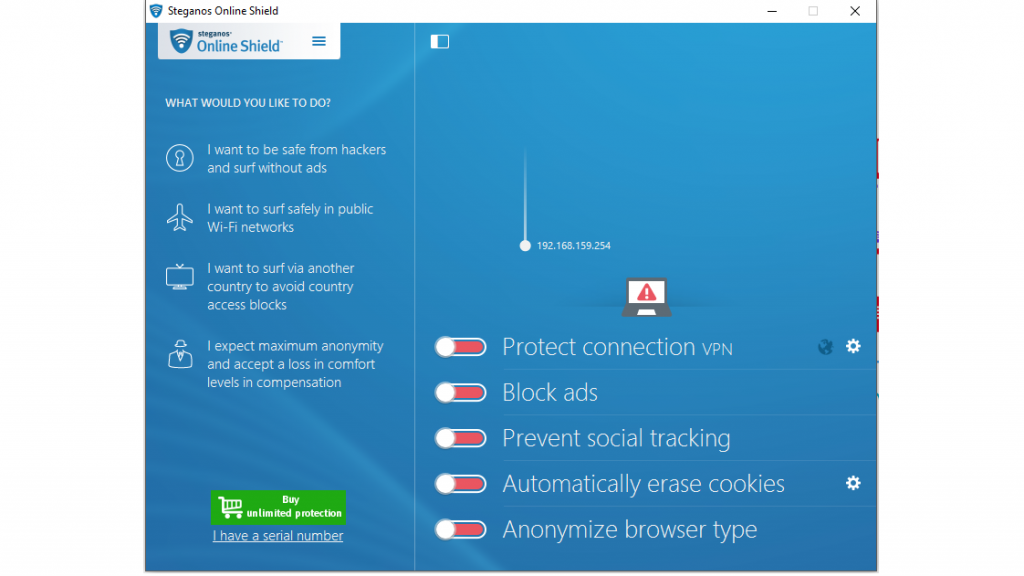 Steganos has always been one of the slower VPN services around and, as the above results so, that hasn’t changed. To its credit, my test history with this one indicate that you’re likely to get the same speeds over a slow home ADSL connection as I did from a data centre. It’s fast enough for web browsing and 1080p video streaming, but downloads will be rather slow, and more challenging streaming tasks may not perform adequately.

Although it’s by no means a service aimed at region-shifting video streaming, I’ve been able to watch UK TV when connected – although it isn’t consistently reliable for this.

OkayFreedom’s free service is handy, but its premium version isn’t worth the upgrade; Windscribe and ProtonVPN’s free services are much more generous.

While it’s easy to use and clear in its intentions, and offers great free trials and tiers, Steganos’ VPN deals are reliable but unremarkable. You’ll find better value by grabbing a two-year Surfshark subscription instead. Check out our best VPN list for even more options.