Intro
What do you do if you want to connect a second monitor to a computer with only one video output, or, Tech forbid, it only has a VGA output? If it’s a desktop PC you can upgrade the video card, but that can be a daunting prospect for the novice user. Meanwhile, if it’s a laptop, you’re pretty much stuck – unless, that is, you use a DisplayLink solution. We’ll get into the nitty gritty in a bit, but suffice to say that DisplayLink lets you output video (and in some cases audio) from USB. The first video adapter to incorporate it that we looked at was the (linkkout:https://www.trustedreviews.com/VillageTronic-ViBook–USB-Graphics-System_Peripheral_review VillageTronic ViBook Plus), and now we’re checking out StarTech’s USB2HDMI. 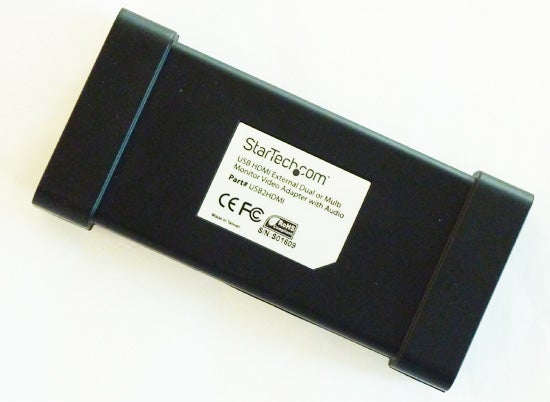 The USB2HDMI does exactly what its name suggests: it outputs an HDMI signal, incorporating both 1080p video and stereo audio, through a mini USB port. So if this can all be achieved using a humble USB 2.0 port, why have dedicated video outputs at all? Well, it’s because normally, USB 2.0 wouldn’t have enough bandwidth. However, DisplayLink (not to be confused with DisplayPort, which is one of those aforementioned dedicated video outputs) compresses the original signal by means of a software-based ‘virtual graphics card’ on your computer, reducing the bandwidth to a level which USB can cope with. It then sends it to a DisplayLink device and decompresses it again using an embedded chip on the device itself. 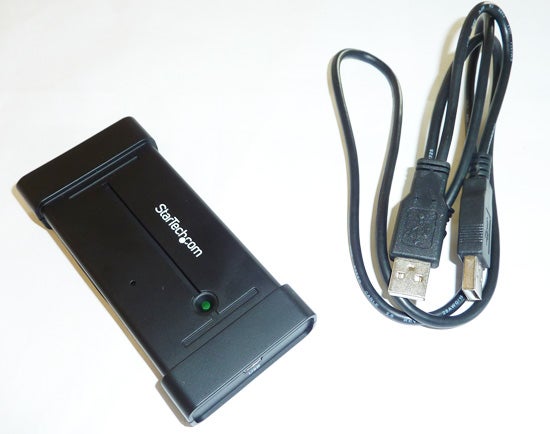 This is all done in real-time so watching video is not a problem, though we wouldn’t use it for fast FPS titles as it does introduce a modicum of lag. Because it also makes room for audio, the USB2HDMI doesn’t go up to 1,920 x 1,200 as did the ViBook Plus, so it might not be for you if your second display is a 16:10 affair with that resolution. But for tellies and the majority of recent monitors, 1,920 x 1,080 (Full HD) is as many pixels as they can display anyway. 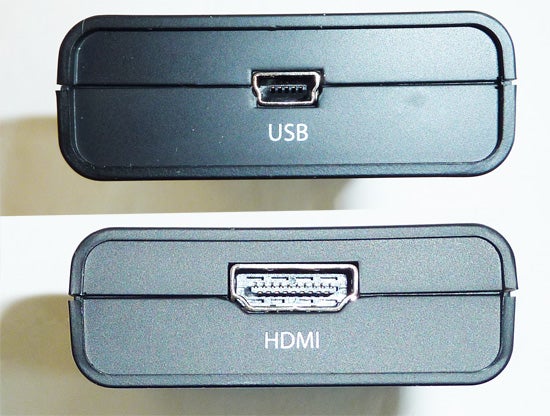 Design and Build
Getting to the hardware, StarTech’s device is about the size of two stacked iPhone 4s and weighs 400g. It comes with a split USB cable that provides both power and data. You only need to plug in the second cable if you happen to have a laptop with low power USB ports; for the majority, plugging in a single connector will suffice. You don’t get an HDMI cable in the box but these are common and cheap as chips.

The USB2HDMI is reasonably attractive in a plain black matt finish, which doesn’t show off fingerprints too much and feels reasonably rugged. Build quality is good with no flex or creak and neatly fitted panels. There’s a small, green LED to indicate when the adapter is active.

Installation and Quality
You’re supposed to install the DisplayLink driver before hooking the USB2HDMI up to your computer, but doing it after works just fine too. This driver is provided on a CD, or you can download the most recent version from StarTech’s website. In fact a generic driver should work, as StarTech does not appear to have made significant customisations. Windows is supported from XP onwards, while Mac owners will need at least OSX.

One install and reboot later, and you’re good to go, with Windows recognising the adapter as a secondary display – even when it’s not actually connected to a screen. Once you do hook it up audio and video is all there, just as if you were connected using a regular HDMI cable. The DisplayLink software will take care of all the usual display options, including extending or mirroring your desktop if the adapter is connected to a secondary display.

Quality is similar, if not quite identical. On rare occasions there was the occasional artefact, and naturally this tech is somewhat sensitive to your computers’ behaviour and specs. However, anyone with 2GB of RAM and a half-way decent CPU should get the full benefits, which include perfectly acceptable digital stereo audio and virtually flawless Full HD video. 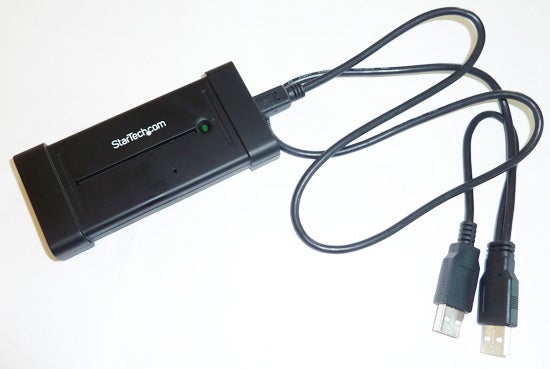 Just don’t try unplugging the adapter while it’s active, as on our test machine this unfailingly resulted in both monitors going blank with no apparent way to restore an image except a reset.

Value
So how does this nifty adapter hold up in the value stakes? Well, it’s readily available for under £60. While this might sound expensive, keep in mind that the (linkkout:https://www.trustedreviews.com/VillageTronic-ViBook–USB-Graphics-System_Peripheral_review VillageTronic ViBook Plus) cost £116 when it launched, and these kind of adapters are still niche products.

It’s also a lot more expensive than what, at first glance, appear to be rivals offering more features, since you can easily find a DisplayLink USB-HDMI/DVI/VGA adapter with support for resolutions higher than 1080p at around £40. However, it’s important to remember that these solutions don’t offer audio. 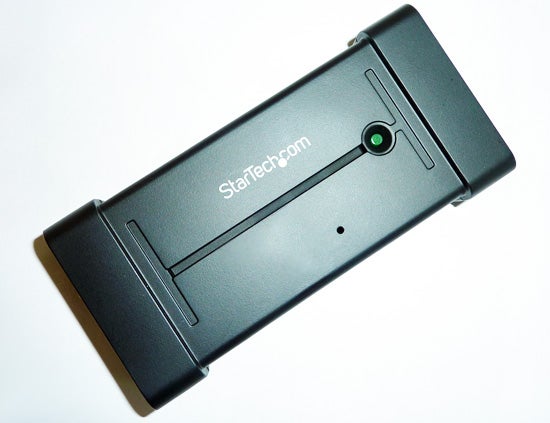 Verdict
If you’re looking to output audio and video to a second monitor from a desktop PC or laptop with only one video output or you want to hook up your VGA-only netbook to an HDTV, the StarTech USB2HDMI does exactly what it says on the box. There’s little competition with general retail availability for this kind of device so it’s difficult to judge its value, but you’re certainly getting a well-built and designed adapter. Just keep in mind that, like its few rivals, the addition of audio means its resolution can only go up to 1,920 x 1,080 (Full HD), rather than the 1,920 x 1,200 pixels found on 16:10 24in monitors.