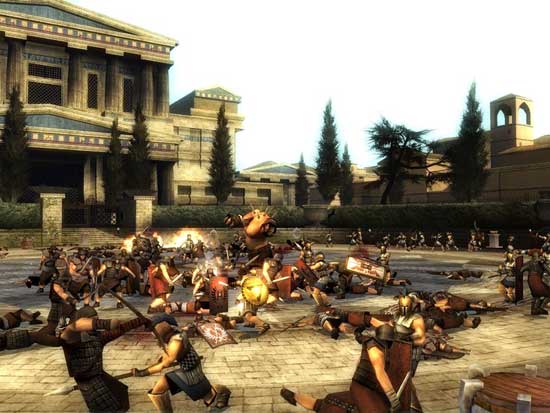 First, a quick film history lesson. Back in the fifties, when TV was just beginning to dominate popular entertainment, Hollywood realised that it was in big trouble. If they wanted to lure audiences away from their brand new TV sets, movies needed to provide something TV couldn’t. Hollywood’s solution was the epic. These needed strong historical or biblical stories, a big cast full of big names, impressive sets or exotic locations, and vast numbers of preferably armour-clad extras. You’ve probably seen some of these movies, maybe on a bank-holiday afternoon or – if you’re lucky – in a cinema revival: films like Ben Hur, El-Cid, Spartacus, The Fall of the Roman Empire. The success of Gladiator even spawned a new, modern wave of epic cinema. Troy, Alexander and Kingdom of Heaven are all, if less successful, still clearly cut from the same cloth and, well, can you get more epic than The Lord of the Rings trilogy?


The reason I’ve bought this up is that Spartan works along similar lines. 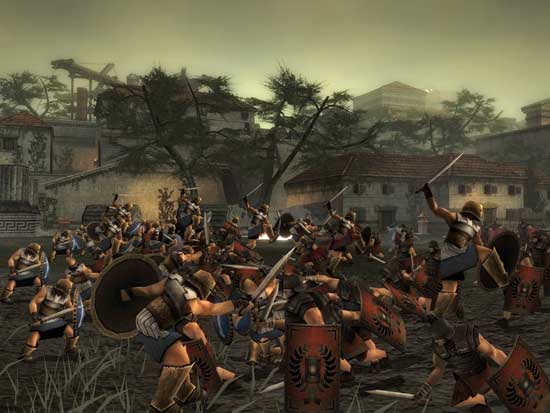 This is a game that believes in size and numbers. It’s a game that pits one man against whole battalions, that throws out big set-pieces like confetti. It’s a game that says “if smacking six shades of stuffing out of one guy is fun, then with ten guys it just gets more enjoyable.” Like much of The Iliad or Gladiator, Spartan is a paean to one man’s sheer destructive force. It plays out like a glorious cross between Dynasty Warriors and God of War, but believe me: that doesn’t begin to do it justice. 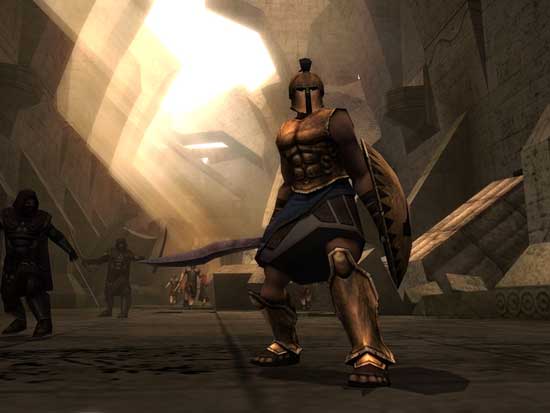 Now, no epic worth its salt lets the facts of history get in the way of a good story, and Spartan is no different. Basically, in the reign of Emperor Tiberius, the Romans have Greece under siege, and only Sparta remains free from their evil imperialist yoke. With sorcerous war machines surrounding the city, it’s up to the unnamed Spartan and his chums to repulse the Roman hordes, then go off in search of the mighty spear of Achilles, which is the one thing that can drive the empire out of Greece. If this isn’t a big enough hint that history has gone out of the window, perhaps this will do: Spartan also manages to cram in the monster, Medusa, the giant bronze warrior, Talos, the greek philosopher, Archimedes and a bunch of Germanic-looking barbarians led by the Scandinavian hero, Beowulf. It’s just that sort of game.

The good news is that the set-pieces really are huge. Spartan kicks off in dramatic fashion, with the Romans raining fire down on Sparta and hordes of Roman troops everywhere you look. This not only delivers instant big-budget thrills, it also gives you a pretty rapid introduction to the central game dynamic. Enemies mob you from every side, and it’s your job to disperse them in the most bloody and effective way possible. Your first weapon, a basic sword, gives you a handy range of thrusting and sweeping moves, and by combining these with some great shield-breaking combos, you soon get the hang of sending enemies flying then closing in for the kill. 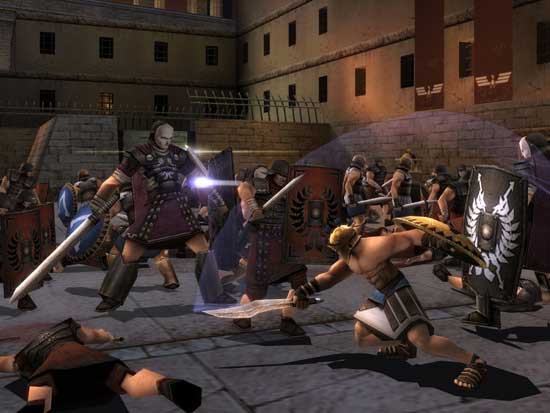 This charming rhythm of hack and scatter, accompanied by a delightful swish of gore, the odd decapitation, and some lovely sounds of sliced neck and shattered skull, is all very satisfying in a bloodthirsty way. If conventional beat-em-ups are all about stringing combos together, Spartan is concerned with stringing kills together. What’s more, as the game progresses you get new weapons adding a whole new tactical dimension: what enormous hammer or vicious sword is the right tool for destroying the next bunch of opponents?


And here’s something else that stops Spartan from just being Dynasty Warriors in sandals. Each level hits you with objectives that need to be respected, and a wide selection of little tasks to juggle. In the first level alone you’re guarding gates, clearing paths for sappers, setting off ballistae, battling centurions and protecting the king. Later on, you’ll find yourself infiltrating a Roman camp, playing bodyguard to a bunch of escaped slaves, setting fire to a barbarian encampment and protecting a village from a raiding force. In other words, it’s not all mindless hack and slash. 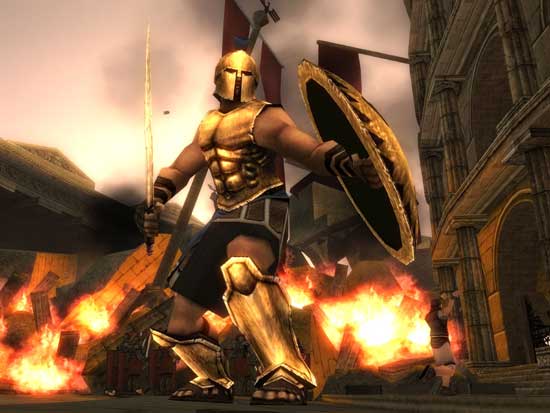 Better still, just when you’re beginning to tire of the run-of-the-mill legionnaires and Barbarian thugs, the game suddenly goes all Ray Harryhausen on you, with skeletal warriors and green-blooded zombies after your skin. The baddies start getting badder, the sheer weight of numbers keeps you busy, and you just haven’t got time to get bored. Where Dynasty Warriors gets monotonous, Spartan always finds something new to keep your interest.


The exotic locations help. Sparta makes for a grand opening scene, but then the game opens out in the hills around Troy, before taking you inside the ruined citadel for a clash with a fiendish new villain and his supernatural allies. With Athens and the Colloseum to look forward to after that, Spartan never gives you the “not more mist and mountains” feeling that Dynasty Warriors hits you with time after time. 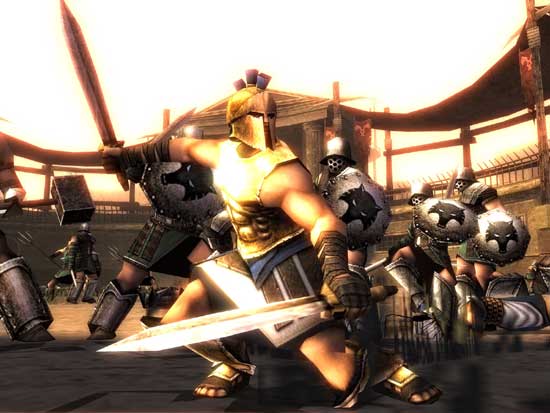 And finally, remember that Koei’s oriental epics have never really filled the screen with convincing extras. If you looked around on the battlefield all you could see were soldiers giving each other timid pokes with the point of a spear – like schoolboys spoiling for a fight but half hoping that teacher will come out and put a stop to it all beforehand. Not so in Spartan. There’s carnage everywhere you look; your fellow Spartans giving as good as they get against the Roman hordes; leering legionnaires trying to slice up escaped prisoners; lumbering giants piling into your armoured comrades. Spartan does two things brilliantly: make you feel part of a vicious, desperate battle, but also make you feel like you’re the most terrifying thing out there on the field. What more could you ask for? 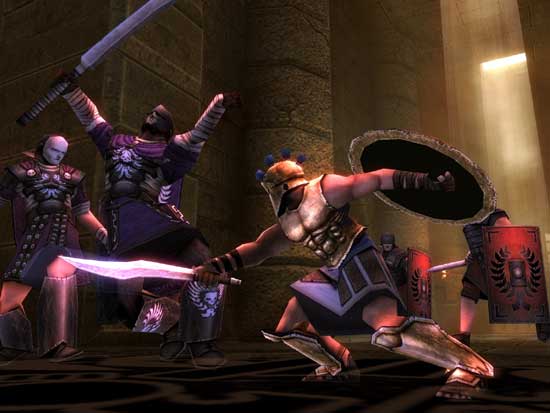 Well, there are a couple of things. First, the game falls down occasionally when it comes to boss battles, making them either ridiculously easy or stupidly hard. One scrap had me creamed in seconds every time until I realised that the best strategy was a ludicrous mix of comic running away and sneaky power-up kills. Secondly, some objectives are a major source of frustration. The full-on combat makes Spartan challenging enough, in a “think seriously about turning the difficulty level down” sort of way. When your escaped prisoners seem hell-bent on running panicked towards the nearest murderous Roman, it only makes it that much harder. Falling victim to a lucky swipe that sends you tumbling off a nearby precipice is no picnic, either. For the most part, Spartan has sensible checkpoints and a tough but fair difficulty curve, but when it does misjudge things, it misjudges them badly. 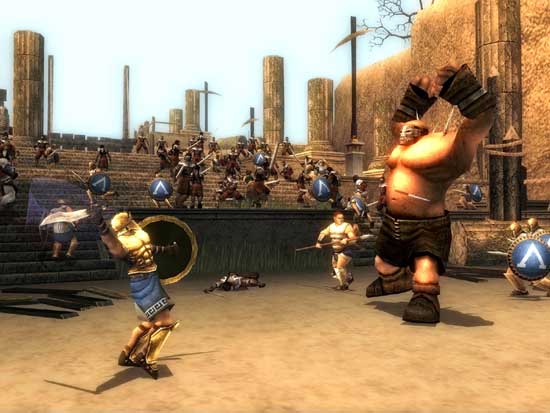 However, the game’s saving grace is always what saved those Hollywood epics: sheer, gobsmacking spectacle. This isn’t a game of intricate detail and masterful art direction, but you can’t help but be amazed by the numbers of troops on screen at any one time – one thing it has in common with the Total War series that sired it. And from the lovely faux HDRI effect used on sun-drenched battlefields to the great slow-mo effect when you execute a killer combo, it gives you plenty of eye candy to marvel at. With its violent sound effects, pounding score and awesome scale, Spartan comes close to God of War for cinematic effect, and while Sony’s effort is probably the more versatile and entertaining game, you can’t really fault The Creative Assembly for not quite equalling a masterpiece. It’s a great, bloody slab of solid action, and one you really shouldn’t miss out on.


If you want to hew your way through packed battlefields, this is the best swords and sandals epic since Gladiator.