Looking to bridge the gap between smartphones and cameras, the Sony ZV-1 could be the Holy Grail that vloggers have been waiting for.

Of course, even with Sony’s stellar track record, a first gen product is always guaranteed to have some quirks that’ll no doubt be ironed out in the next iteration. Plus, at £699, the ZV-1 is no small purchase, especially for part-time vloggers.

There’s a case to be made that, if Sony genuinely wanted to attract the smartphone crowd, the ZV-1 would need to feel as portable and as lightweight as a smartphone – within reason of course.

The sight of bulky camera kits and elephant trunk lenses can be enough to send millennials running (myself included), so before a discussion about features could even take place, Sony would have to nail the design. Well, it’s safe to say they’ve done it. 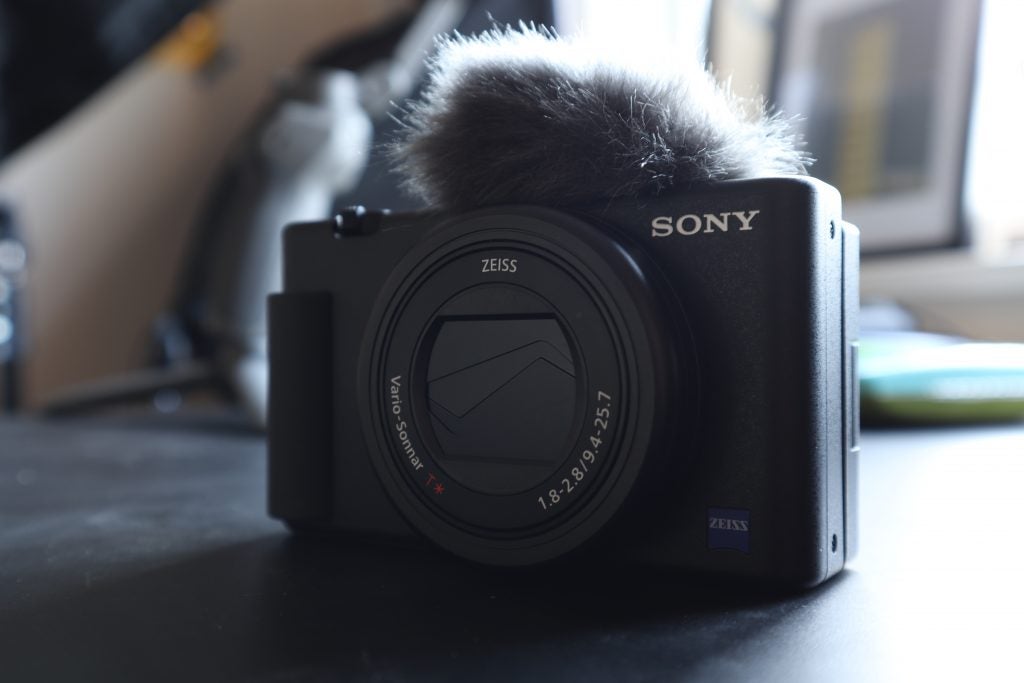 Despite its focus on video capture, the ZV-1 has more in common, design-wise, with the Sony RX series. While not quite as small as Sony’s compact cameras however, the ZV-1 made my portable Canon M50 suddenly seem a lot larger by comparison.

At 10.5 x 4.4 x 6 cm, the ZV-1 can easily be placed in a pocket or a small camera bag, and you won’t get tired holding it at arm’s length. Despite its premium features, the ZV-1’s grip is actually made of plastic and while it might not look like the most elegant option, it still did the job of keeping the camera firm in my hand.

Even though there’s a solid built-in mic – and we’ll talk more about that later – there is a hotshoe on the top if you want to go with your tried and tested set-up, alongside an expected tripod mount at the bottom. Sadly, there’s no headphone input to be found here, although I’ve yet to see any vlogger constantly checking the audio levels whilst filming. What is baffling however is the inclusion of a micro-USB port over USB-C. Come on Sony, USB-C should be a given for any device of this price point.

Aiming to please its intended audience, there are fewer physical buttons to be found on the ZV-1 than your typical camera, with the rear-facing control panel featuring a scroll wheel that encompasses a larger button, surrounded by four smaller buttons for navigation and switching between different modes. 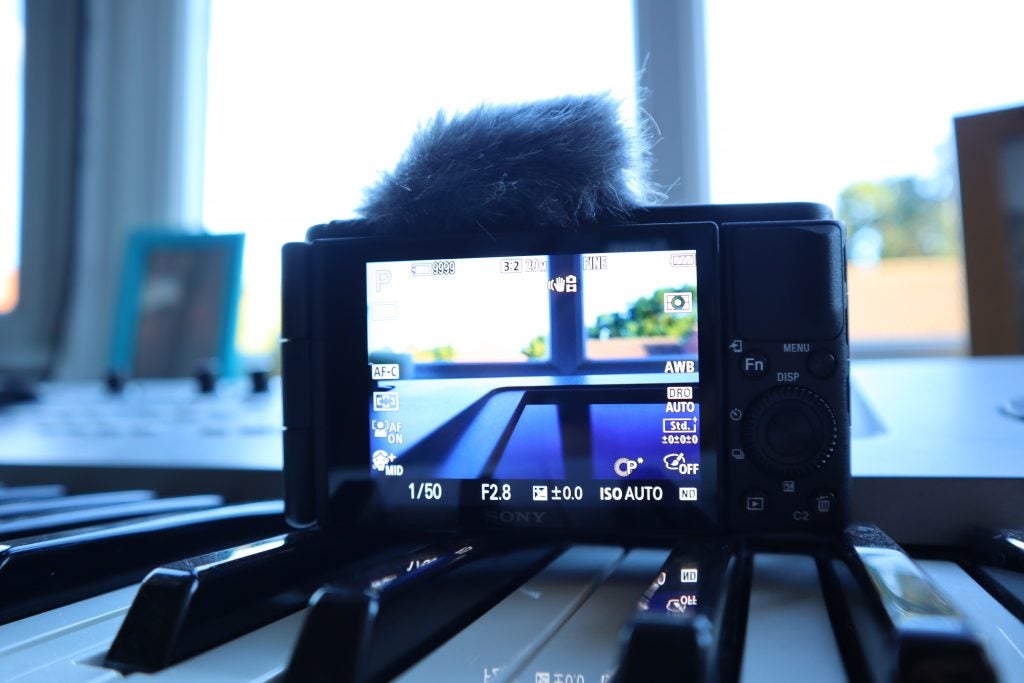 It’s familiar territory for camera enthusiasts, but it doesn’t scream ‘accessibility’ in the same way that its revamped top button layout can boast. Showing its intentions as a video-first device, the ZV-1 packs a huge red button for recording, alongside a smaller shutter button for photography, and a third shutter dedicated entirely to enacting the camera’s bokeh mode.

Features and performance – a dream come true for vloggers

As an all-in-one device, the ZV-1 needed to cram a ton of features into a small amount of retail space. That’s no easy feat, but leave it up to Sony to absolutely hit this aspect right out of the park.

Let’s start with the aforementioned bokeh mode – certainly one of the more heavily publicised features of the ZV-1. On the top of the camera, nestled away from the shutter press and record button, there’s a third shutter dedicated to enabling a live bokeh mode, where the background is blurred out in real time, keeping the focus solely on your face.

The feature works incredibly well – it’s fast, easy to use and really sells the premise that the ZV-1 is an approachable camera for newcomers.

As impressed as I was with the bokeh mode, I was more interested in testing out the ZV-1’s in-built mic. I’m a bit of a stickler when it comes to good audio quality, particularly during vlogging when there’s more of a chance of too many competing sounds ruining a take.

The video below was filmed entirely on the ZV-1 and as you can no doubt hear – the audio quality is excellent. The camera’s 3-capsule mic did a fantastic job of honing in on my voice despite the chaos of Central London occurring in the background.

The only time I had any noticeable issue was when a fleet of motorcyclists used the road encompassing Trafalgar Square, but even then their noisy engines still weren’t enough to drown out my voice completely. There’s also a wind screen attachment included in the box for an extra helping hand during some of those more blustery days.

As you can no doubt tell, I made the rookie mistake of forgetting to switch on the camera’s stabilisation features, but they can be seen on full display in a video further down this review. There are two options here, standard and active stabilisation, although opting for the latter does crop the footage so you’ll want a decent amount of distance between yourself and the camera if you decide to use it.

Appealing directly to beauty vloggers and tech journalists alike, Sony’s also included a new ‘Product Showcase’ feature. When switched on, product showcase allows the lens to immediately focus on any item that you put in front of it. For example, if I wanted to go immediately from a shot of my face to the brand new Samsung Galaxy S20 Ultra, I could simply bring the device up to the camera and it would automatically shift the focus away from myself to the phone. Given that a fair amount of cameras struggle with this, or require some physical interaction to get the focus to shift, having this feature just makes the filming process so much easier. 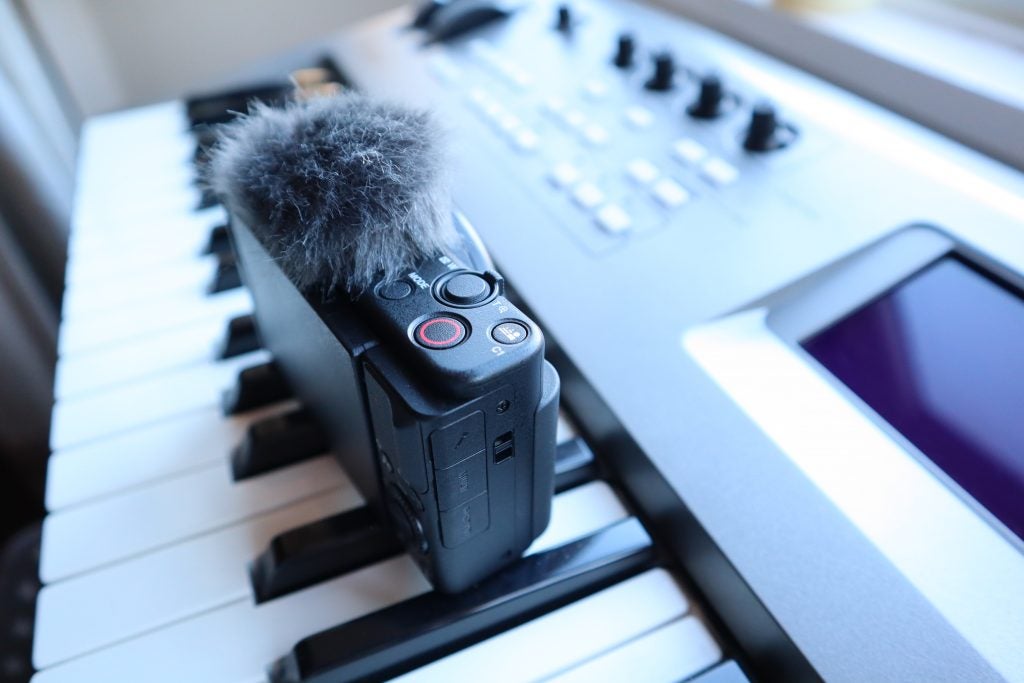 As you’d expect, no vlogging camera is complete without a swivelling screen, and the ZV-1’s no exception. You can flip the screen out 180 degrees so you can keep track of everything while you’re filming, or swivel it within a 270 degree rotation instead if you’re trying to go for a more artistic shot. While it’s a minor addition here, the ability to switch off the ZV-1 by simply closing the screen is something that I became immediately addicted to and never looked back.

All of these features combine to make an unbelievably streamlined process – the only part of the camera that doesn’t meet this standard is in its navigation. Diving into the ZV-1’s menus, the camera falls into the same trap of having an abundance of pages and categories that, while fine for a professional, are bound to put off any amateurs.

This isn’t a deal breaker by any means, but it does seem like a strange oversight when Sony’s gone out of its way to make the rest of the ZV-1 as user-friendly as possible.

What could be a deal breaker however is the ZV-1’s propensity for overheating. Taking the camera out and about isn’t an issue, but I found things to be quite the contrary whilst filming indoors. Utilising a traditional filming set-up, with two softbox lights on either side of the camera, the ZV-1 had to call it quits after half an hour. 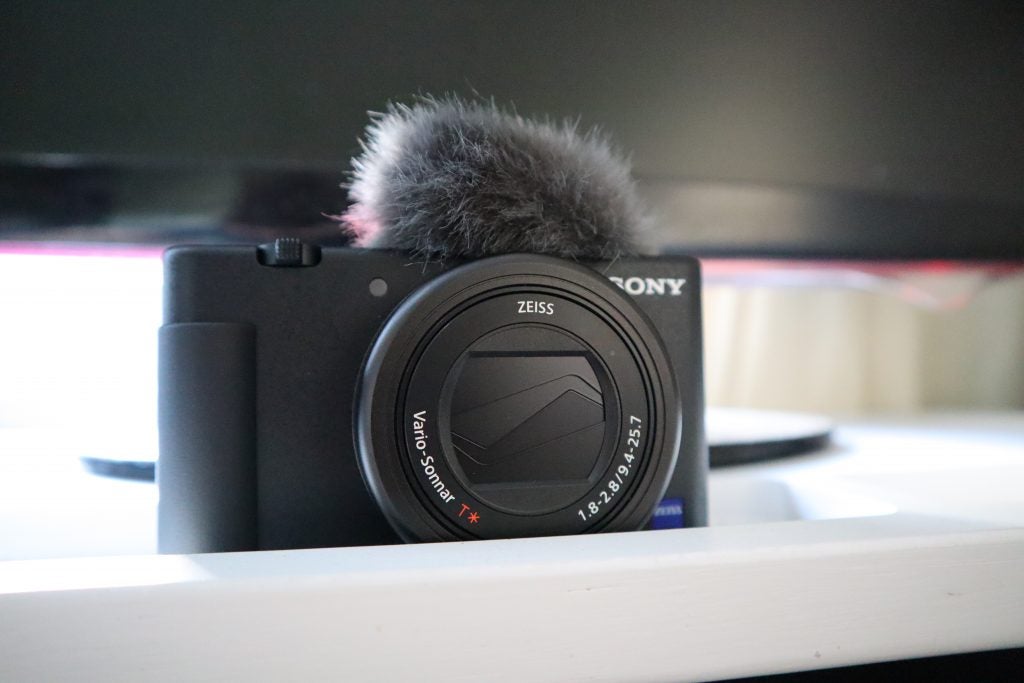 Granted, I do live in a top-floor apartment where the general temperature is going to be slightly warmer, but other reviews have also noted this issue, so if you are looking for a camera solely for indoor filming then the ZV-1 might not be your best bet.

The Sony ZV-1 can film in up to 4K 25p 100m, which is perfectly fine for vlogging but not the full 60fps experience to satisfy any adventurers. In that regards, the GoPro Hero 8 Black still remains the top dog.

Throughout our testing, footage remained bright, vibrant and even more importantly, in focus. With other cameras, I’ve usually come across a threshold where the auto-focus reaches its limit and has a hard time adjusting, but I was unable to find such a threshold with the ZV-1.

The inclusion of a 24-70mm f/1.8-2.8 lens and a one-inch sensor is key to the ZV-1’s success, as it’s the ideal setup specifically for the vlogging format, even though it does sacrifice the ability to dive into wide, landscape shooting.

Being a camera, you can indeed take still shots with the Sony ZV-1, and for the most part, they do the trick just fine. There’s not a huge amount of versatility but the aforementioned auto-focus allows users to snap between the points of a scene that they want to hone in on, just with a tap of the touchscreen.

Should you buy the Sony ZV-1?

It doesn’t matter if you’re a newcomer or an established online personality, the Sony ZV-1 offers a class-leading all-in-one experience that’s near-perfect for vloggers. The unbelievable microphone quality, complemented by top-tier autofocus and a dedicated bokeh button makes it an absolute joy to use.

Until Sony can work out the overheating problem, the ZV-1 is best avoided for strictly indoor filming, and the convoluted menus and use of Micro-USB prevent it from being the future-proof camera we’d hoped for, but the ZV-1 has set a new bar for what a vlogging camera can be.