I’m not one to moan, but I put myself through a fair bit in the line of duty for TrustedReviews. I put up with ropey MP3 players and low-quality bundled headphones. I listen to music I wouldn’t ordinarily wish to be caught dead with, yet then find myself humming it on the street days later. I struggle through games as awful as Space Siege or Fracture just to make sure they’re as bad as my intuition informs me. They always are. But with the NWZ-W202 I’ve taken self-sacrifice to a whole new level. I’ve actually been out jogging! 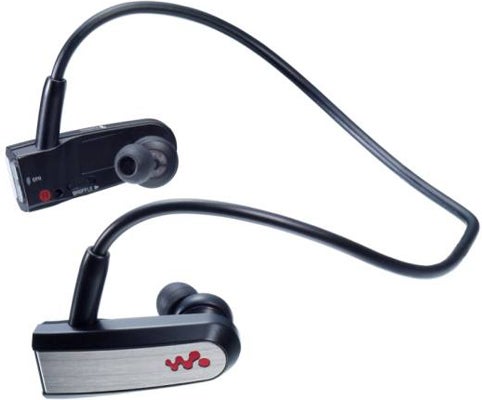 I haven’t done it for years, and after the hour or two it took me to recover I remembered why. Yet the NWZ-W202 deserved the effort, as my night-time run convinced me of what I’d already suspected: that this is the best audio player for active pursuits I’ve seen.


At first, the form factor seems rather gimmicky. Whereas rival products like the iPod Shuffle or Philips GoGear Spark are still essentially conventional MP3 players, just smaller, lighter and attachable to clothing, the NWZ-W202 is a true one-piece design, with the player effectively integrated into a pair of in-ear headphones. 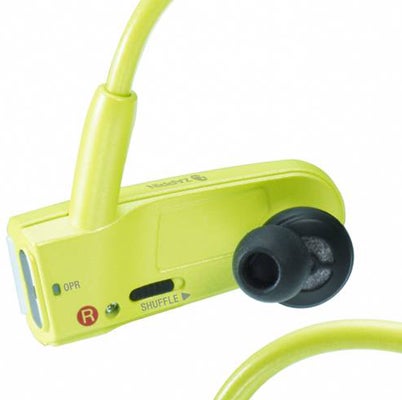 The battery and electronics are packed into two slimline units that sit on top of the ears, with the earpieces protruding inside your lug’oles, and the whole caboodle kept in place by the toughened, springy cable that fits around the back of your head. At first, it does look a bit silly – as if you’re so self-important that you’ve attached two Bluetooth headsets to your head with a piece of thick wire – but in actual fact it’s not too bad. In fact, if you find the black models I looked at too understated, you can also get the NWZ-W202 in pink, yellow, purple or white.

The design also makes sense for other active pursuits. A spot of gardening? No problem. Tree-felling? Likewise. DIY Kitchen-fitting? Ideal (and with the added bonus that you can’t hear anyone moaning that you’re not putting that screw in straight it’s going to rip through the bottom of the cupboard if you don’t watch out). If you spend any time with an MP3 player involved in similar activities, you’ll know how annoying it is to constantly trip over the headphone cable or knock the headphones out of place with an ill-timed movement. With the NWZ-W202, this simply never happens. 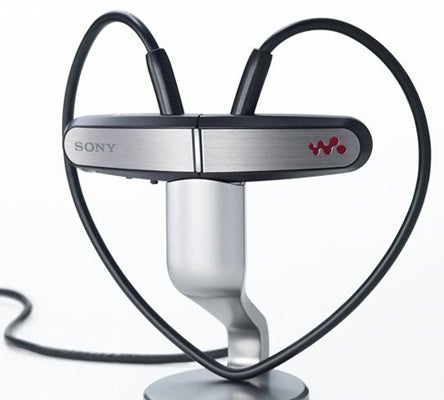 Now, there are two compromises you might expect with this kind of player, but Sony has cleverly thought about both of them. The first is usability. Understandably, the NWZ-W202 doesn’t have a screen, and the only controls are a volume rocker, a shuffle switch and a multi-purpose jog dial that handles pause/play and search functions. In practice, it’s clear that the player is designed primarily to work in shuffle mode, and that even then there are times when you want to skip tracks.


Apple gets around this problem with the new Shuffle by adding the speech facility, the unit announcing tracks as you skip through, but the NWZ-W202 takes a different approach with a feature called ‘Zappin’. Hold in the jog dial and flick it forwards and the headphones proclaim ‘Zappin in’ in a preposterous American accent before running through tracks, playing a few seconds of each so you can work out what it is. 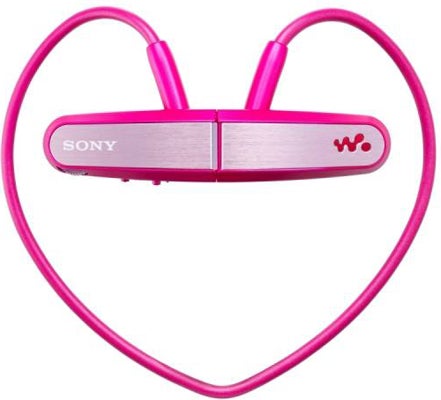 Theoretically, this segment is supposed to be the chorus, but in my experience it could be roughly any loud and interesting portion. Hear something you like and press the jog dial in again and the headphones announce ‘Zappin out’ and the track plays. It’s slightly bizarre, and the voice is really, really, really weird, but it works. Sure, you can’t navigate properly through albums or artist lists or playlists, but then on a player of this type, I don’t really expect to.


The second compromise is that you can’t change the headphones, and so this makes the audio quality of the existing set quite crucial. Luckily, the NWZ-W202 actually performs very well. The secret is that Sony has incorporated the 13.5mm drivers from its mid-range EX series of headphones, and while you still won’t find the Walkman as good to listen to as, say, a Sansa Clip with a pair of Shure SE102s, you still get enough bass response, clarity and definition to make music enjoyable on the move.

There’s enough raw grunt to make the frantic riffs and screamed vocals of Soundgarden’s Rusty Cage sound good, and enough low-end presence to give Massive Attack’s Angel it’s brooding atmosphere and steadily building dynamic. It’s always good to have something poppy when out on a run, and whether it was Justin Timberlake talking me through his Sexy Ladies (the jammy git) or Gary Barlow promising The Greatest Day, the NWZ-W202 works well with tight, clear productions and strong percussion.


Being picky, I would say that while the bass-end is thick it’s not particularly articulate, and this can come across in songs with dominant bass lines. Meanwhile, mid-range clarity isn’t perfect and the treble can be slightly brash. All the same, give me the NWZ-W202 over a low-end player with a pair of bundled earphones, any day. 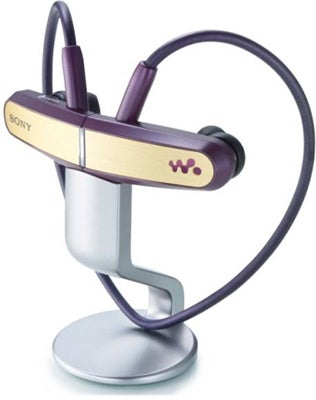 Finally, Sony has played smart when it comes to battery life. Battery life of 12 hours is claimed, and in my test the NWZ-W202 exceeded this by several minutes. Plus, for those moments when you’re about to go on a run then – DOH! – you realise that you forgot to charge the battery, you can just slip it onto the supplied charging cradle, making sure the standard mini-USB connector is correctly inserted, and three minutes later you have enough juice for an excruciating 90 minutes of jogging.


I also like the fact that when you take the headset off, magnetic clips on the left and right units hook together and the whole thing goes into standby mode. What could be an unruly mess quickly turns into a compact device you can sling in the gym bag without thinking. Nice. 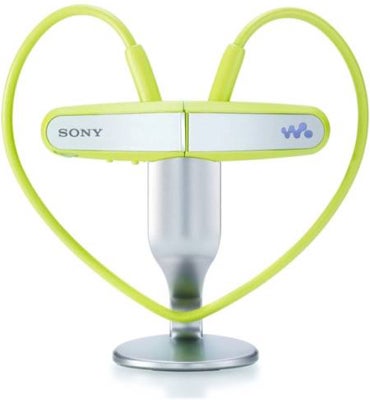 The NWZ-W202 isn’t the ideal compact player for everyone; with its 2GB capacity, its lack of navigation facilities and no display, it isn’t really designed to be. But for those activities where you want to keep clear of cables and entanglements, it’s ideal. I can’t really imagine a better player to take on a run or to the gym, and now I’ve got used to having it during spells of gardening and DIY, I’m not looking forward to losing it. If you want a versatile, great-sounding small player for everyday use then the Sansa Clip remains your best bet, and with the right headphones will give you a better sound. If, however, you want music to work or workout to, then the NWZ-W202 comes highly recommended.