What is the Sony Walkman NW-WS413?

The Sony NW-WS413 is a 4GB MP3 player built into a set of waterproof and dust-proof IP67/68 headphones. There’s also the NW-WS414, which are identical but bump up the storage to 8GB. Both models form part of the Sony Walkman NW-WS410 series.

That’s the simple answer. But there’s more beneath the surface. Charging and battery life, for example, is a big deal here. This generation of waterproof MP3 players offers better battery life than before, as well as fast-charging capabilities.

But how do the Sony Walkman NW-WS413 waterproof headphones hold up in real-world use?

To say that the Sony Walkman NW-WS413 headphones are comfortable and a good fit would be an understatement. While they might look bulkier than your usual in-ears, they certainly don’t feel it. They’re light and well fitted so that whether you’re running or swimming they sit perfectly in place throughout.

The type of waterproofing is a factor, too.Sony has upgraded this generation to not only be waterproof but resilient in salt water for up to 2m for 30 minutes as well as being sand- and dust-proof. This means the Sony Walkman NW-WS413s should be able to remain on your ears pretty much anywhere you go.

The headphones come with various size of earbuds as well as different types. Some are open-ended for on land listening, while others feature a thin clear plastic seal membrane on the end to stop water getting into the speakers when swimming. While these muffle the sound a little, they do ensure clarity underwater. The issue will come when moving from swimming to running, where a switch in earbud type will help clarity. You’ll need to ask yourself if you are actually going to carry about spare buds for multi-discipline training. 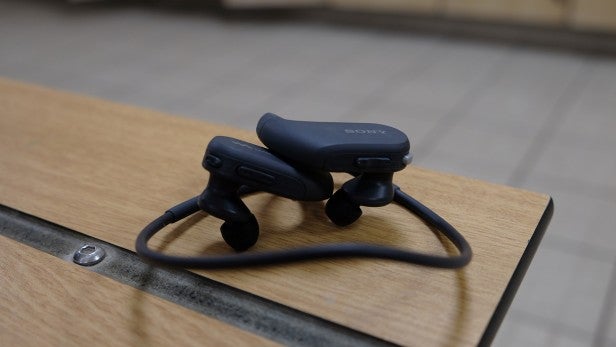 While swimming, the fit of the NW-WS413s was excellent, with very little movement even when doing tumble turns, front crawl and breaststroke.

The only issue I encountered was when pushing off from the end of the pool – pushing too hard resulted in at least one of the earbuds popping off, which meant I had to then re-affix the headset. As a result, I had to remember to push off without too much force, which became natural after a few turns and actually made me consider my technique.

The headphones also feature an Ambient Sound mode, which, at the touch of a button, makes the surrounding world easier to hear. There is a difference, but to be honest it’s so slight that it isn’t worth the cost battery-wise – seven hours with it on; 12 hours without – so I barely used it.

Once the headphones are in place, all the buttons are easily accessible. I tapped play to start music then hit Mode to select shuffle play of tracks but you can also play tracks based on folders or albums. Audio was as clear as any other sports headphones I’ve tried, and the clarity remained once I’d submerged my head underwater. However, this didn’t last.

While these could be the clearest headphones I’ve used in water, they didn’t remain consistently that way. Initially, there were bursts of interference as water sloshed between strokes. This applied to both breaststroke and front crawl when swimming. Eventually, water must have made its way into my ears as that in-and-out popping ended and sound was far steadier. That, or the Dynamic Normaliser kicked in and levelled out the audio. 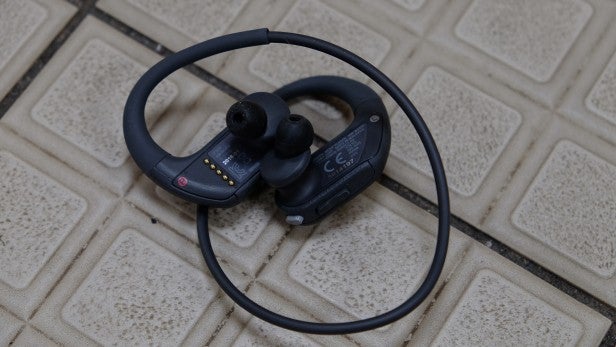 While it became less annoying, it did mean the music changed from sounding clear to muffled. It was a little like in a film, where a group are at a party with music playing, then they go to the next room and you hear a more bass-heavy, less-treble-sounding version of the music. The sound wasn’t as clear as I’d have liked.

After the swim, I decided to run home and put the NW-WS413s through their paces en route. A quick change of earbuds before heading out resulted in far clearer sound for the run. Comfort levels remained perfect and the earbuds sat snug, without any of that popping you sometimes get as earphones seal and unseal a vacuum in your ear.

Bass levels are decent, which is great both underwater and above when listening to such artists as Wu Tang and Jay-Z; it isn’t as clear and balanced when in the wet, but remains decent enough not to mar your enjoyment and a welcome distraction to the bustle of the local pool. 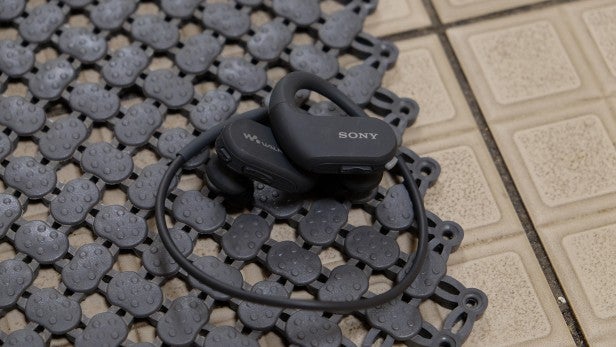 A positive side effect of using the NW-WS413s while swimming is that I found it easier to push myself further and faster than usual without as much strain. Listening to music to distract and enhance your training really works here.

The Sony Walkman NW-WS413 is all about simplicity when it comes to music transfer: it’s simply a matter of dragging and dropping files.

Using the provided high-speed USB 2.0 cradle, the headphones can be plugged into a Windows PC or Mac, where it will charge and appear as a drive. Then, presuming you’ve downloaded music and don’t rely on music streaming services, you can drag those files and drop them into the folder for playback – either in order, shuffled or on repeat. 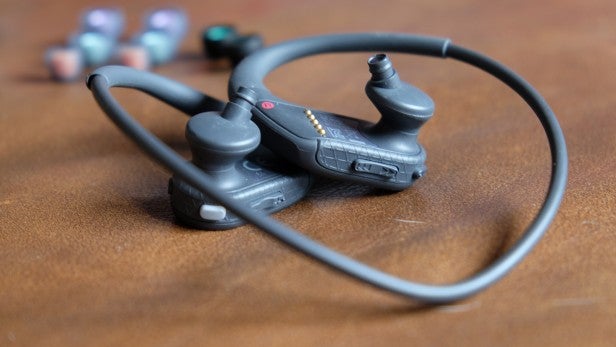 The player supports MP3, AAC, WMA and Linear PCM formats, so most people should be covered. Failing that, there’s plenty of conversion software out there if needed.

These aren’t Sony’s first such sports headphones, but they’re the best yet. New to this range is a 12-hour battery – double that of the previous generation. However, as I’ve already mentioned above, the Ambient Sound mode – which allows the wearer to hear their surrounding more clearly – will reduce this to seven or eight hours, depending on file type and level of Ambient Sound selected. 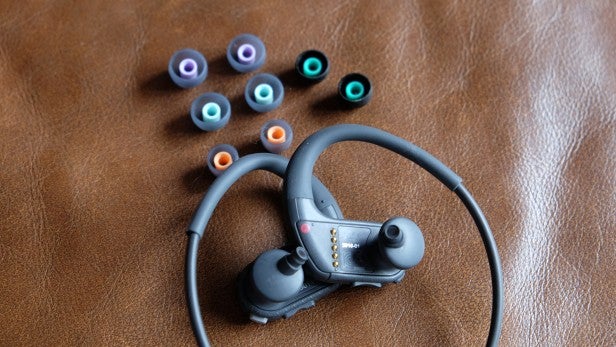 It’s the Quick Charge function, of which I’m really a fan. Place these headphones in their proprietary dock and a three-minute charge will give you an hour of use. The dock is small and light and, as already mentioned, ends with a USB connector, meaning you should be able to charge the device via most USB plugs as well as mobile chargers and laptops. That quick three minutes of charge makes a big difference if you forget to charge between sessions.

Should I buy the Sony Walkman NW-WS413?

If you want a dedicated music player for the water – be it swimming, surfing, kayaking or anything else aquatic – these could be ideal. While runners will immediately turn to music as a distraction, this has never really been the case for swimmers. These headphones can change that.

There are plenty of alternative options available that are cheaper, albeit from brands that you may never have heard of. That said, Sony also has in its range a more comprehensive waterproof headphone device in the Sony Smart-B Trainer. Aside from music storage, it also offers GPS run tracking, a Bluetooth smartphone connection and a similar design and fit. However, the Smart-B Trainer costs more and offers a much shorter battery life. 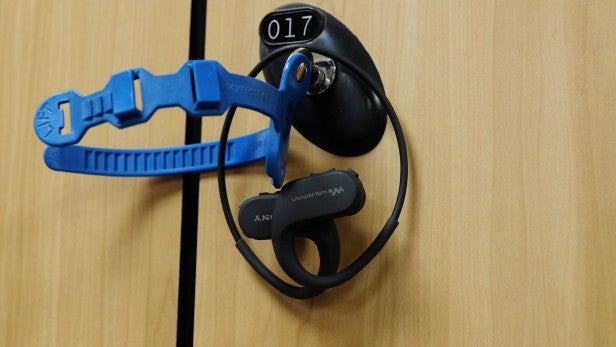 Sony has a history of making solid, robust products and the NW-WS413 live up to this heritage. With plenty of waterproofing experience, including in its more recent smartphones, Sony is a trusted brand whose swimming MP3 player is something that you’ll be able to use without worry of damage.

Battery life is also a huge pull here. With 12 hours, you’ll rarely need to charge. Even if you forget to do so, a quick three-minute charge will give you enough for an hour in the pool. While if you don’t necessarily need the extra storage, it’s worth stretching to the NW-WS414 as it’s only £10 more for double the storage.

Although underwater sound quality isn’t as good as dry; there are plenty of positives that make the Sony Walkman NW-WS413 a very versatile proposition.