One of the things that puts some people off desktop PCs is that they can take up a lot of space and look messy doing it. In this scenario, many will prefer a notebook, but for those who just like that desktop PC feel or want a bit more screen real estate than most notebooks can provide, your best bet is an all-in-one system. The last one we looked at was the HP TouchSmart IQ810, which had a Full HD screen and touch functionality, but came in at close to £1,500, putting it out of reach for many. So today, we’re looking at Sony’s VGC-JS1E, an attractive-looking and more affordable solution. 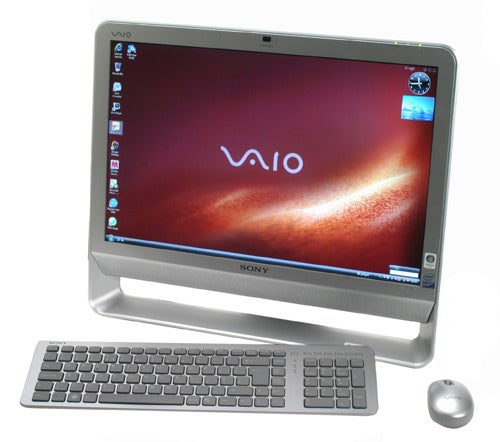 
Taking the machine out of its box, first impressions are certainly favourable. Build quality is generally good, though there are a few flimsy parts. It’s available in a range of colours, including brown, pink and silver, with black a regrettable absentee. Our silver unit did look good, though, with strong, smooth lines and a minimalist design. It has a consistent depth of only 6cm, and looks even thinner thanks to some clever bevelling and chassis moulding. At 8.5kg, the computer is also easy enough to move between rooms but usual with these kinds of systems the power brick is a large clunky affair. 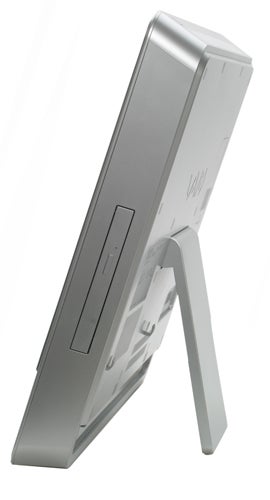 The VGC-JS1E minimalist design is best reflected in the picture frame-style stand, which is formed by combining the curved surround at the front with a solid, spring-loaded support that’s hinged at the rear of the chassis. This arrangement, while simple, allows for a large degree of tilt adjustability. 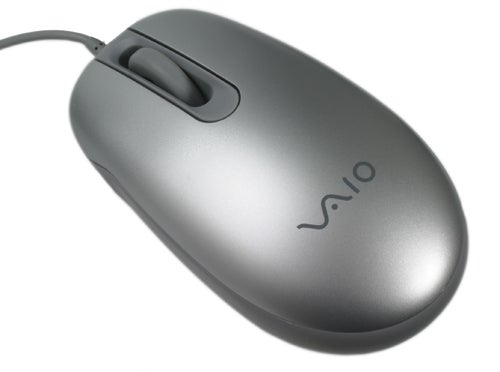 Sony also provides a matching mouse and keyboard. Unfortunately these are wired, which somewhat ruins the VGC-JS1E’s clean look. The ambidextrous optical mouse is really quite diminutive, making it difficult to use with average-sized hands. I certainly didn’t find it overly comfortable. Aside from this, the only drawback is the lack of horizontal scrolling. Aesthetically, I do like the way the mouse-wheel ‘floats’ in a small cut-out that passes right though the mouse. In a way, this echoes the cut-out at the bottom of the PC which, incidentally, makes for a convenient place to stow away the keyboard when not in use.

Speaking of the keyboard, it’s an altogether more impressive affair than the mouse. It sports the isolated key style typical of Sony’s high-end products and is incredibly slim, which obviously matches the smooth lines of the main unit beautifully. Key response is good, with a positive click despite the shallow typing depth, but the keys are a little slippery. The keyboard also sports some neatly integrated shortcut keys and function keys, including volume and brightness.

Getting back to the VGC-JS1E itself, there’s a decent selection of features and connections. There are wireless, hard drive and power indicators at the top of the screen’s bezel, to the left of the 1.3-megapixel “Motion Eye” webcam. Above the power indicator at the machine’s top is a subtly integrated power button and a ventilation slot. It’s worth mentioning that the Sony stays very cool during use, and is virtually silent unless put under stress.

On the right side is the DVD-writer, while on the left are SD and Sony’s MagicGate memory card slots and two USB ports along with 3.5mm headphone, microphone and line-out jacks. There is also a wireless switch, which is easy to use without having to look around the side. At the back we find a further three USB ports, a mini-FireWire port, power and Ethernet sockets. Best of all, a digital audio connection enables you to hook the integrated Realtek Audio card up to your home cinema system with the best possible quality. 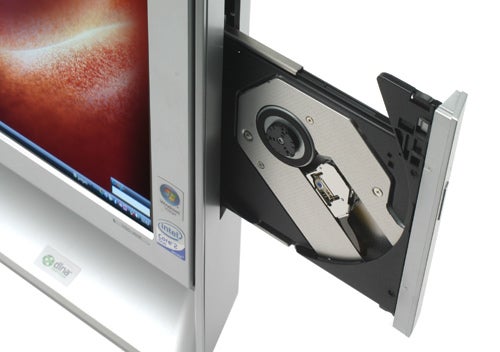 While wishing for an e-SATA port might be being picky (despite most notebooks featuring one these days), what has me more frustrated is the total lack of video in or outputs. So you can’t hook the VGC-JS1E up to your 40in TV or play any of your consoles on its screen. Unfortunately, this is a complaint common to most all-in-one systems. However, Sony has seen fit to offer HDMI-in on its LN all-in-one series, which sport the same screen size, so its absence here is even more annoying than usual. 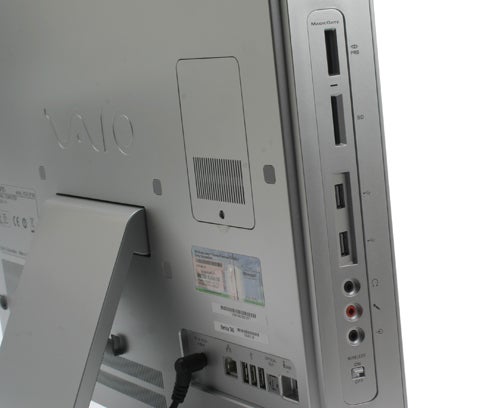 This is exacerbated by the fact that the screen is really rather good. Horizontal viewing angles are very impressive for a TN panel, though as usual vertical ones suffer. The 20.1in panel also manages deep and detailed blacks at the cost of some slight white purity and highlight differentiation, a reasonable compromise for an entertainment-oriented system. This and the good horizontal viewing angles makes films a joy to watch especially for those beaten to the best seats in the house.


Colours are vibrant without being oversaturated, and though the screen does have a glossy coating, reflections are less of a problem than on many other such displays, including the one on the HP TouchSmart IQ810. Finally, there is only the slightest hint of backlight bleed at the bottom centre, which you’d never really notice unless looking for it, gradients are incredibly smooth with no sign whatsoever of banding, and text is never less than razor-sharp.

Unfortunately, the speakers don’t live up to the VGC-JS1E’s visual performance. While classical music or speech comes across with presence and clarity, anything that relies on a high level of bass to really work will lose out. Furthermore, serious distortion also creeps in at higher volumes.

In terms of the VGC-JS1E’s internals, a Core 2 Duo E7200 running at 2.53GHz provides plenty of processing power for any kind of task that prospective buyers of this kind of system are likely to want to perform. The CPU is ably backed up by 3GB of 800MHz DDR2 RAM – the practical maximum amount usable for the installed 32-bit version of Windows Vista Premium – while the 500GB hard drive should be large enough for most needs.


The one really underpowered aspect of Sony’s all-in-one machine is its Intel integrated GMA X4500HD graphics chip. Don’t be fooled by the impressive name; this card will struggle with all but the most undemanding of games, as demonstrated by the 13.6FPS score in TrackManiaNations Forever, tested at the screen’s native resolution on medium detail. Nor does it offer any intensive video processing or decoding, leaving the speedy Core 2 Duo to do all the work. 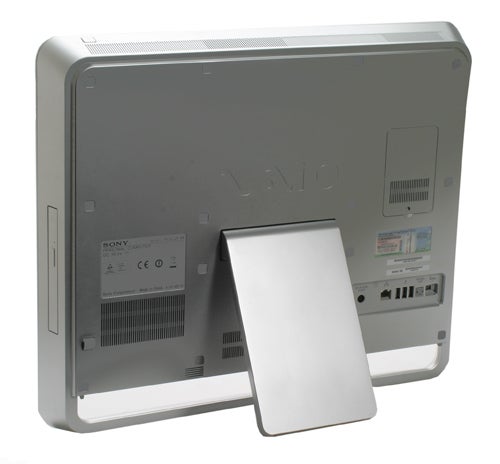 As if to make up for it, wireless connectivity is well covered by Draft-N Wi-Fi and Bluetooth 2.1. In terms of software, meanwhile, there’s nothing too special here save for WinDVD 8 and SonicStage Studio 2.5.


All of which brings us to the most important question: is it worth buying? As is so often the case with systems aimed at a niche sector, that’s not the easiest question to answer. When looking purely at components, a normal desktop system like Medion’s Akoya P36888 offers more for only £500, enabling you to then buy a Full HD monitor like the Iiyama ProLite E2208HDS for the same overall price as Sony’s unit. Since you’ll want to get separate speakers anyway, this makes the VGC-JS1E look less appealing for the money. 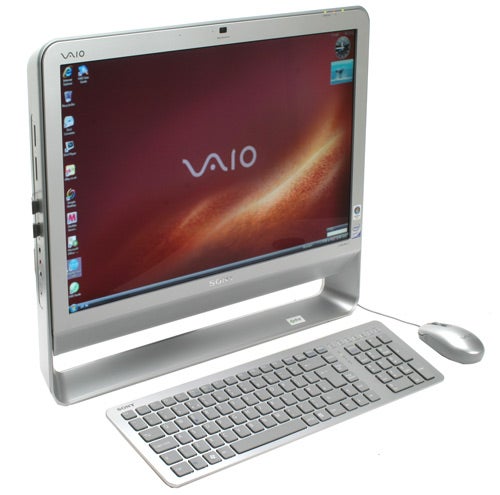 But let’s not forget that this is an all-in-one, making the HP TouchSmart IQ500, which is now available for £900, a much fairer comparison. This HP features the same screen and hard drive size, and a slower processor, but the extra £260 does get you Touch functionality, a TV-tuner, wireless peripherals, a remote, better graphics, more memory and inputs, and better speakers. Then again, another £50 onto that gives you Sony’s VGC-LN1M, which offers all this (except touch control) and a Blu-ray drive.


So, at the end of the day, it is the cheaper all-in-one option, and when you compare it to Dell’s XPS One or Apple’s iMac, you get far more than either manufacturer’s base systems, which start at £800 and £780 respectively. It all comes down to a matter of end-user preference. If you want an elegant and compact all-in-one system for general everyday use, and aren’t hell-bent on reaching the upper echelons of extreme graphics performance, then Sony’s VGC-JS1E seems like a reasonable choice.


The Sony VGC-JS1E all-in-one PC is one of the cheapest PCs of its type, and with no major downsides compared to its competition save for the weak speakers and gaming potential, there’s really no reason to not consider it if you want an elegant system on a budget.