Sony has never been afraid
to challenge the conventions of mobile computing. Sometimes this leads it down silly blind alleys, but in the VAIO Z Series its boldness is well-founded. A 13.1in laptop, it weighs just 1.43kg, has enough processing power to go toe-to-toe with any desktop replacement laptop and should last more than a few hours on a single charge. It is, in other words, a genuine mobile workstation. 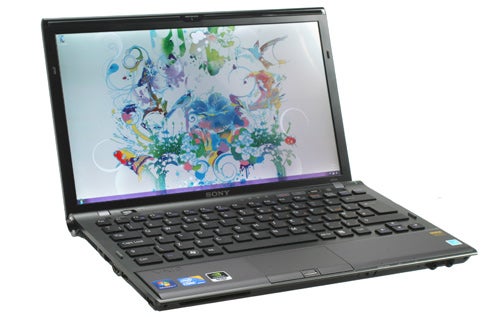 Unsurprisingly, such delights don’t come cheap. Even in its cheapest guise, which dispenses with the integrated optical drive, it’ll set you back a cool £1,350. Our particular review spec, however, costs an eye-watering £2,399! This is clearly a massive amount to ask for any kind of machine, but a quick look at the spec list explains this astronomic price.


Kicking things off is the Intel Core i7-620M processor, the two cores of which run at 2.66GHz and share a 4MB Cache. Like all Core i5 and i7 chips it has Intel’s Turbo Boost technology, which in this case means it can run at up to a massive 3.33GHz should the need arise. This is the fastest dual-core mobile chip Intel currently has, and it’s supported by a whopping 6GB of DDR3 RAM and two 128GB SSDs (total 256GB) configured in RAID 0 for maximum performance. 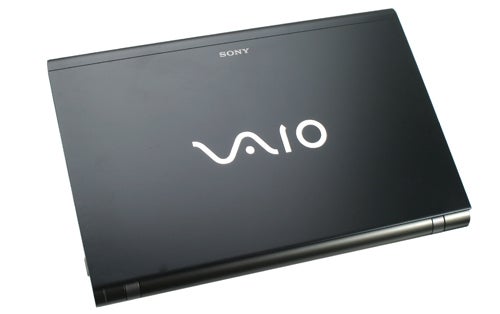 This isn’t the end of the extravagances, though. While the default display is a 13.1in, 1,600 x 900 panel, our model has a 1,920 x 1,080 native resolution screen. Throw in other expensive extras, such as an HSDPA modem to go with the Wireless-N Wi-Fi and Bluetooth, or the fingerprint reader and TPM (Trusted Platform Module) for enhanced security, and the Z Series comes packed with every conceivable feature possible.


There’s more, too, as one of the key features of the Z Series is switchable graphics. This means it can cycle between the powerful 1GB Nvidia GeForce GT 330M dedicated graphics, and the power-saving Intel integrated chip. This, so reckons Sony, should result in up to 7.5 hours of battery life – something we’ll be testing later on.

Unfortunately, like the Alienware M11x we reviewed recently, Sony has yet to implement Nvidia’s Optimus graphics switching tech, but its solution is fairly elegant. Instead Sony has created a three-way switch, labelled somewhat laboriously as the “Dynamic Hybrid Graphics System”, which has the self-evident options of Speed, Stamina and Auto. Leaving it in auto mode should suffice for most people; it simply switches to the integrated graphics when on battery and vice-versa when plugged-in.

In comparison to the hardware specs, the connectivity on the Z Series is somewhat mundane. There are just three USB ports, none of which offer eSATA or standby charging; HDMI and VGA for video; a couple of memory card slots (one for SD cards, one for Sony’s own formats); and a Gigabit Ethernet port. A 34mm ExpressCard slot is included as well, but these days we can’t imagine many people using it. 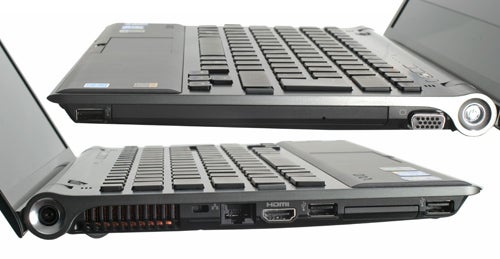 Neither is the Z Series a particularly outlandish object to behold. Sony has gone for an understated, professional look that has plenty of style, but is ultimately tailored for practicality. A black, matt plastic lid, while extremely thin, won’t collect unseemly fingerprints and grease; neither will the gunmetal-grey, brushed metal interior.


What’s more impressive about the design, though, is the weight. Despite including some seriously heavyweight hardware, including a standard 8x DVD drive, dedicated graphics and a six-cell battery, the Z Series weighs just 1.43kg! Many netbooks, with their puny Atom processors and small screens, weigh more than this. It’s a truly incredible feat. 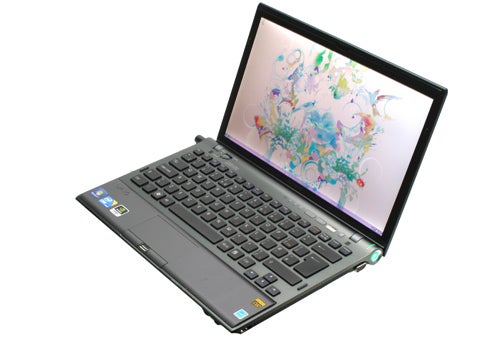 Clearly Sony’s use of lightweight materials, such as aluminium and carbon fibre, has a large part to play in this. There’s compromise to be found, though, because the Z Series doesn’t have that feeling of solidity and reliability you might find in the likes of Lenovo’s ThinkPad range.


This isn’t to say it’s poorly made, the fit and finish is generally excellent, but elements like the thin plastic underside bend noticeably under pressure. Many will be alarmed by the amount of flex in the screen as well, but this isn’t necessarily a bad thing as flexibility brings with it a degree of give during an impact, plus there’s no creaking in evidence – the sort you get with more rigid, badly fitted plastics that typically crack over time. Overall, provided you treat it well you shouldn’t run into any problems.

One of the great things with the 13-inch form-factor is that, while portable, you don’t typically sacrifice usability. This is generally true of the Z Series, but it does have one or two idiosyncrasies. One is the keyboard’s keys, which are slightly smaller than on most 13in laptops – such as Sony’s own Y Series. This means there’s plenty of space between each key, so inadvertent keys strokes are infrequent, but it does take a little getting used to. Another is that, like the Y Series, you can sometimes brush the edge of the touchpad when typing. This can often mess up documents when typing, but can be eliminated by adjusting the touchpad driver settings.

Aside from these issues, the Z Series is a great machine to work on. Both the layout and key actions of the keyboard are excellent, while the very subtle backlighting is perfect if working in dimly lit auditoriums or the like. We also love how the slight elevation of the palm rest, and incline created by the battery, creates a near perfect angle for typing. As for the touchpad, it works fine and the two buttons are nicely defined.

Then we come to the most astounding aspect of the Z Series: its screen. Whether you opt for the standard 1,600 x 900 resolution screen, or the insane 1,920 x 1,080 pixels of our model, you’ll be greeted by one of the best screens to be found on a laptop. Its colour production, which covers 96 per cent of the Adobe RGB colour space, is out of this world. Be it videos, photos or games, everything is brought to life with a level of detail unsurpassed even by the excellent screen on the Apple MacBook Pro 15-inch.


Not satisfied with awesome colour fidelity alone, viewing angles are incredibly wide. It’s also extremely bright which, combined with a non-reflective, semi-matt finish, ensure this is a laptop that can be used comfortably anywhere. As for the 1080p res option, it is somewhat extreme. If you have some use for such a high resolution, though (e.g. video/photo editing), it’s only a £50 upgrade and adjusting Windows’ DPI settings can eliminate any readability issues. 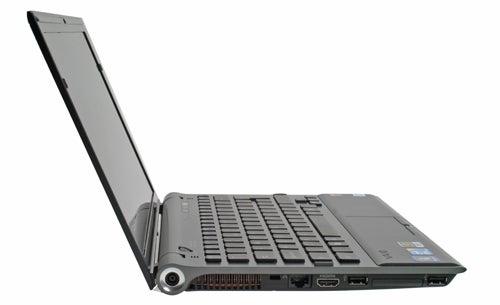 Crashing back down to earth with a bump are the speakers. Their tiny slits beneath each hinge say much about how important Sony thinks these are, and the resultant output only confirms this. They’re hopelessly underpowered, tinny and lacking in any warmth at all. Does it matter? Not too much, but it’s worth bearing in mind nonetheless.

Considering the price and the spec, we were expecting some serious performance from this Z-series laptop. Even so, we weren’t quite prepared for the extreme testing results we encountered. In PCMark Vantage, at least, it’s the fastest laptop we’ve ever tested and by quite some margin.

This is thanks in large part to the ultra-fast SSD configuration, which has two 128GB drives configured in RAID 0 to boost performance. While we’ve included a couple of recent laptops, namely the Acer Aspire 5942G and the Samsung R780, for comparison, in reality we’ve reviewed nothing that affords a useful comparison. Its explosive performance in our synthetic benchmarks is confirmed via subjective use. Whatever you’re doing this system just flies.


This is also a machine that can play games. In Trackmania Nations it managed a brisk 90fps, while even our much more demanding STALKER: Call of Pripyat test resulted in a playable 30fps. These are quite similar results, in fact, to the Alienware M11x – no surprise considering both use the same Nvidia GeForce GT 330M graphics card.

All this performance does have some side-effects, however, as the Z Series isn’t the quietest machine around. When using the integrated graphics it’s much like any other laptop, but switch to the dedicated GPU and throw the machine some number crunching tasks and the fan kicks in with gusto. This is a somewhat inevitable impact of having such powerful components in a relatively small chassis, but anyone who’s particularly intolerant of ambient noise will be irritated by it. That it only occurs during very taxing tasks is something of a consolation, though, and while it does get noisy the machine itself doesn’t get too hot.


The battery life, despite not matching Sony’s initial claims, is still mighty impressive considering the power at your disposal. Using the Stamina mode, our Z Series lasted 323 minutes (5hrs, 23mins) in the Productivity test – good enough for several hours of offline and online use. Even the 151 minutes (2hrs, 31mins) of DVD playback is impressive considering how bright the screen can go. Moreover, should this not be enough for you, Sony does offer an upgrade over the standard six-cell, 5,200mAh battery.

All of which goes to prove that the Z Series is everything it promises to be. Not only is it eyebrow-singeing fast, on battery power it can last long enough to get meaningful work done. It’s not without one or two issues, not least its bank-breaking asking prices, but there’s nothing else we can think of that does what it does quite as well, and you can always make a few tweaks to the spec to save money without sacrificing too much performance.


In many ways the Sony VAIO Z Series is one-of-a-kind. As fast as many desktops, but no heavier than many netbooks, it’s a testament to what can be achieved thanks to modern hardware and engineering. It’s a niche product, of that there’s no doubt, but if you need the power and portability it offers then it comes highly recommended.