Our primary impression when unpacking Sony’s VGN-NS30E/S 15.4in Laptop was one of déjà vu: on the outside it’s completely identical to the Sony VAIO VGN-NS20E/S we reviewed a few weeks ago. However, not only has the model number jumped up by one, price has also taken a hike from the £450 the NS20E/S currently demands to £550 for this model. We’re about to find out if it can justify the £100 difference. 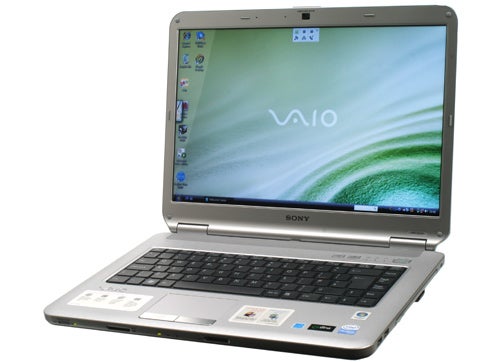 As before, the Sony’s bulky silver-and-black chassis feels very well-built, making this one of the sturdier budget laptops around. The heavily-textured finish that covers most of it not only lends a unique and somewhat stylish look, but also means fingerprints won’t be a problem.


Typing is a pleasure thanks to the excellent tile-style keyboard. Layout is good, while the large, shallow-profile keys sport a black matte surface that lends a nice feel. Keys have a decent amount of travel and positive click. Thankfully the touchpad also remains unchanged. It’s large with a nice smooth surface and its chromed buttons offer excellent feedback, though they are a tad on the noisy side.


Touch-sensitive media controls are all the rage on laptops these days, but Sony follows Dell’s Inspiron 1545 in breaking this trend. Above the keyboard you’ll find two buttons, the first of which mutes the volume while the second calls up an XMB-like interface like that seen on the PS3 or PSP, which gives an alternate way of accessing multimedia, Internet, the laptop’s webcam and Skype. 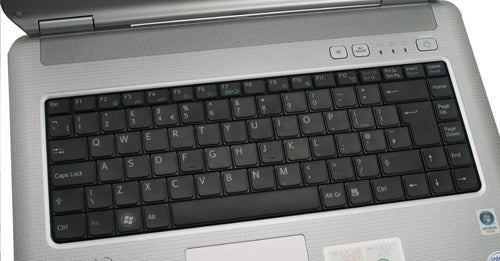 Though the higher price might have had you hoping otherwise, connectivity is also the same as on the NS20, so there’s no eSATA or any form of digital video output. This was disappointing enough on a laptop under £500, but inexcusable on one that’s £600 direct from Sony.


At least the rest of what’s on offer is decent. On the left we have VGA, headphone, microphone and two USB ports, as well as a mini-FireWire input and 34mm ExpressCard slot. Though one would have hoped for a more flexible 54mm slot in a laptop this size, Sony makes up for it a little by including a hinged flap to keep the dust out – a tidy solution we wish more manufacturers would implement.


Moving onto the VAIO’s front, we find a handy wireless switch with its own little LED, one SD memory card reader and another for Sony’s proprietary Memory Stick format. Three LED indicators for power, battery and HDD activity are visible with the laptop closed. On the right are the DVD-Rewriter and a further two USB ports giving a generous total of four, while modem, Ethernet and power inputs are found around the back. 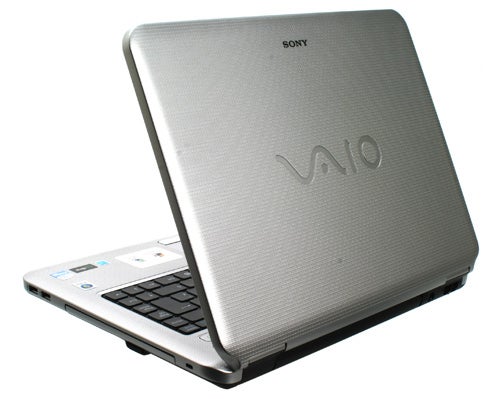 Sony has kept the same 15.4in screen too, so we’re looking at a glossy-finish 16:10 affair with a resolution of 1,280 x 800. Bright colours and just above average black levels with nary a hint of backlight bleed make for pleasant viewing. Viewing angles also seem to be slightly better than on the NS20E/S, though this is likely due to minor manufacturing variability rather than an upgrade of some kind. On the other hand there was some banding in gradients which wasn’t so evident on the NS20E/S, though text is still very sharp.


Audio, meanwhile, is just as mediocre as before. The speakers manage okay volume levels, but when not distorting everything comes out sounding very flat and lacking in bass, so as usual you’re better off using headphones or external speakers.

It is when we get to the internals that we start spotting differences between the NS30E/S and its cheaper VAIO sibling. While the NS20 came with a 2.16GHz dual-core Intel Pentium with a 667MHz front-side bus, the NS30 features a 2.0GHz Intel Pentium T4200 with a faster 800MHz front-side bus. Thus, while the core clock speed on this system is slower, its faster front-side bus should cancel the difference out. In our testing we found the disparity to be pretty negligible.

You still get 3GB of RAM, which is about all the 32-bit version of Windows Vista Premium can handle anyway, but it’s now running at 800MHz to match the front-side bus. Disappointingly, the graphics are still reliant on Intel’s integrated Express 4 series chipset, whose frugalness ensures good battery life but means even remotely demanding games are out of the question. Likewise, the hard drive is still a 250GB 5,400 model, and Bluetooth hasn’t made the grade either. Wi-Fi is up to Draft N, which is no less than we would expect at this price.


Battery life is excellent for this form factor, with the Sony managing just less than five hours in the low-intensity Reader test and four hours 20 minutes in the multi-tasking Productivity segment. Since it uses the same 4,400mAh (49Wh) battery as the NS20E/S, the extra 10 to 15 minutes are solely due to architectural changes.

Value is where the NS30E/S falls down, though. Just £50 onto its cheapest £550 price online (or the exact-same amount Sony sells it at direct) will get you a Dell Studio 15 laptop with an LED backlit display, a Core 2 Duo processor, discrete graphics, more RAM with a 64-bit version of Vista to utilise it and a larger hard drive, not to mention niceties like a 54mm ExpressCard slot, HDMI and eSATA. Moreover, if you’d rather buy from a retailer, there are many similarly priced systems that offer a greater variety of features.


Another compelling alternative, especially for the budget conscious, is the Samsung R522. It’s now on sale for just £515 and has similar strengths to the Sony, including good battery life, an outstanding keyboard and attractive design, but costs less.

Finally, for those who absolutely must have the VAIO name plastered across their laptop’s lid or who are after longer battery life, there’s still Sony VAIO VGN-NS20E/S, which offers a very similar experience to its more expensive sibling in an identical wrapping. In time it’s likely it will disappear in favour of this model, but until it does there’s little reason to opt for this system over it, since £100 nets you little performance gain and no extra features.


Sony’s VAIO VGN-NS30E/S might have class-leading battery life for its form factor, but with the physically-identical NS20E not far behind there’s little reason to spend the extra £100 it demands until it comes down in price to match. If battery life is not that important, meanwhile, there are many more feature-rich offerings available at this price point.

As you can see performance between the NS20 and 30 is almost identical – certainly nothing to justify the £100 difference. Also note how the Samsung, which is equipped with a Core 2 rather than the older-architecture Pentium processors, pulls ahead.

As we can see in both the Productivity and Reader benchmarks, the processor and chipset upgrades over the NS20 result in an average of 15mins longer battery life.

A result of just less than five hours is excellent for this price-class and form factor.

In DVD playback the cheaper NS20 closes the gap, leaving its more expensive sibling with a measly five minutes of headway.