If you can’t already see the picture below we suggest you fetch a pair of sunglasses before you scroll down. With the VAIO E Series, Sony appears determined to burn the retinas of anyone who beholds them. Available with 14-, 15- and 17-inch (we’ve got the 14in) screens, the E Series is sold in bold renditions of pink, blue and green. If you want to be boring there are white and black versions as well, but we’ve got the pink one and it’s very very pink. 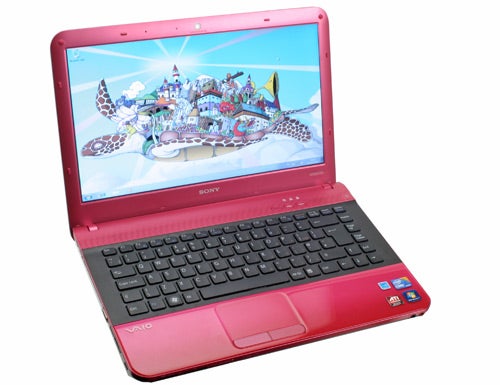 Unsurprisingly this boldness divides opinion, but there’s something to be said of Sony’s no holds barred approach. If you’re going to make a statement with your choice of colour, why hold back? It helps that the basic design of the E Series is very strong. As with all Sony VAIOs it doesn’t do flouncy and fussy; it’s clean, to the point and elegant. This leaves the colour, or lack thereof, to make all the headlines.


Pricing and availability for this particular specification is a little patchy, but it varies between £650 and £750. At the top-end of this range it’s a tad pricey, but below £700 it’s okay. Whatever you end up paying you’ll get an Intel Core i3-330M, which clocks in at 2.13GHz and has a 3MB Cache, along with 4GB DDR3 RAM, a 500GB hard drive and a 64-bit install of Windows 7 Home Premium. 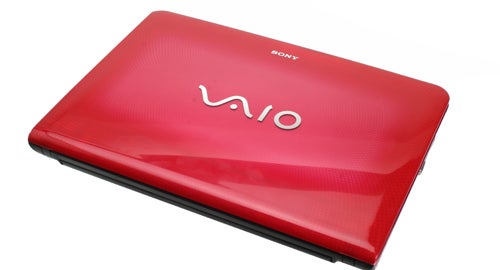 These specifications are a good start and they’re supplemented by a 512MB ATI Radeon Mobility Radeon HD 5145 graphics card, as well as Wireless-N Wi-Fi, Bluetooth and Gigabit Ethernet. Most impressive, though, is that the 14in display has a roomy 1,600 x 900 resolution. That’s the same resolution as found on the Samsung R780 with its 17.3in display, and it’s a good deal more generous than the 1,366 x 768 pixels found on most competing machines. 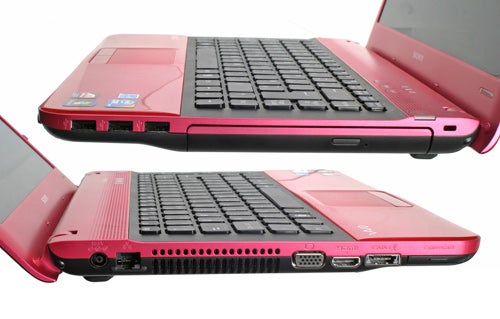 Sony offers up a decent amount of connectivity, too. There are four USB ports in total, one of which does double service as an eSATA port, and both HDMI and VGA are on-hand for video. There are a trio of different expansion slots: one for 34mm ExpressCard devices; one for Sony’s proprietary memory cards; and one for the more commonly supported SD card format. Also, on the front edge, is a useful hardware wireless switch and two audio jacks – one for headphones, one for a microphone.

Also included is Sony’s Quick Web Access instant-on browser. It takes the web browser element from DeviceVM’s Slashtop operating system, serving it up in around 25 seconds upon pressing the WEB button above the keyboard. It’s the kind of useful sounding feature that works great on a press release and we dare say it’ll be exactly that from time to time, but a replacement for a fully-featured browser it is not.

Such competence is matched by the touchpad. Like on the NW it has a slightly dimpled texture to differentiate itself from its surroundings, which proves a pleasant surface to glide across. Multi-touch is supported but only for pinch to zoom, making it somewhat limited in scope and therefore not that useful. 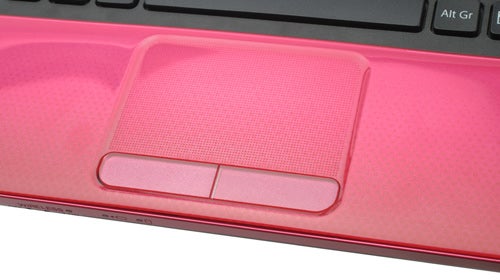 Of much greater benefit is the high resolution of the screen mentioned earlier. Being 1,600 pixels wide makes it a lot easier to fit documents side-by-side and the extra 132 vertical pixels you gain over most laptop displays makes browsing long documents and web pages a little easier. We wouldn’t say the high pixel density (the number of pixels per inch of screen) makes it particularly difficult to use, either – it’s a great resolution for this size of display.


Even better is the quality of the display itself. Horizontal viewing angles are actually rather poor by typical standards, but they’re more than made up for by the excellent colour production and contrast produced. Fine details in videos and photos are brought out very well, a fact further enhanced by the sharpness of this resolution on a relatively small screen and the deep blacks. It’s a step above similarly priced laptops. 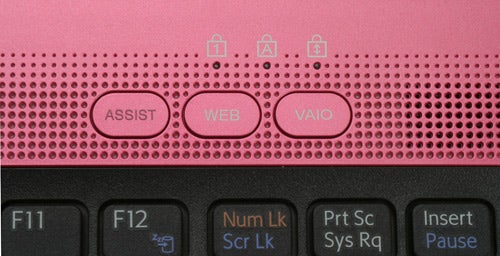 Things come back down to earth with a bump where the stereo speakers are concerned, though. While not the worst we’ve heard, not by a long chalk, they’re still far from impressive. There’s no discernible bass and the mid-range lacks warmth, leaving only the now familiar tinny sound found on so many laptops. We can probably forgive this particular weakness, however, especially considering the superlative display.

For performance comparison we’ve used the Samsung R580 and HP Pavilion dv6-2113sa, both of which walked away with Recommended Awards recently. While the spec of the Sony is broadly similar to that of the Samsung, the E Series benefits from a 64-bit OS and this is reflected in the seven per cent advantage in the overall PCMark Vantage result.

We’re far from convinced you’ll notice this difference in real-world use, though, and given the Sony costs over £100 more we’d expect a greater advantage. It’s still a perfectly capable performer, but for the money it doesn’t really shine and we recently spied a version of the HP Pavilion dv6 (DV6-2105EA) with a faster Core i5 processor for just £640.


It’s a similar story in the gaming benchmarks. While the Sony doesn’t embarrass itself, it hardly sets the world alight either. In fact in the Trackmania Nations tests it’s the slowest of the three, albeit at a playable 36.7fps, only to reverse this by being the fastest in the more demanding STALKER: Call of Pripiyat test. In any case it should do decent service for casual gaming, but anything beyond that is stretching things a mite.

This solid, but not outstanding, performance is concluded in our battery life tests. Again the Sony performs similarly to the Samsung R580 here, but given it weighs 2.35kg and is smaller in size – and is therefore more portable – we’d like a little more than the 199 minutes (3hrs, 19mins) of Productivity it managed. Another of Sony’s 14in laptops, the CW Series, lasted four hours when we reviewed it last year, which is much closer to our expectations.

Ultimately, then, the E Series lives and dies on the quality of its display: it’s the only stand-out feature. If quality and resolution are particularly important to you then the E Series instantly attains greater value, but we’d wager that those who care about such things mightn’t be as keen on Sony’s garish/bold (delete as appropriate) colour designs.


This is another good laptop from Sony that lives up to its reputation for good quality design. It also benefits from an excellent display, but for the money its performance doesn’t quite live up to expectations.