The Sony UBP-X700 is a cracking 4K disc spinner that boasts great performance and features, at a very tempting price. Thanks to a firmware update that adds Dolby Vision support, it will surely be the player of choice for many Sony TV owners.

The Sony UBP-X700 is the latest 4K Ultra HD Blu-ray player from the company. It retains many of the features found on the Sony UBP-X800, but does so at a more affordable price point.

Thanks to a firmware update, it also boasts a new feature in the form of Dolby Vision support. This is the disc player that Sony fans have been waiting for, but how does it perform?

The Sony UBP-X700 is rather flimsy in construction, which is disappointing when you compare it to the tank-like build quality of the X800. To reach a lower price point Sony obviously had to cut corners – literally, in the case of this player’s angled chassis. As a result, the X700 feels rather cheap, with a largely plastic construction, a narrower width and a weight of only 1.4kg.

The player comes in black with a two-tone finish, and the stripped-down minimalism extends to the front, with no display and almost no controls, aside from power and eject buttons. When the latter is pressed, the front panel drops down and the disc tray slides out. This process isn’t particularly smooth or quiet, reinforcing the feeling of a budget player. 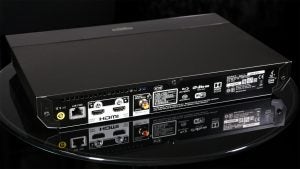 The only connection on the front is a USB port, everything else is around the back. Here you’ll find two HDMI outputs: one is 2.0 with HDCP 2.2 support, the other is HDMI 1.4 for those with older soundbars and receivers.

There is a coaxial digital output and an ethernet port, but that’s it for physical connections, so no analogue outputs. The X700 also has built-in Wi-Fi, although unlike the X800 there’s no support for Bluetooth.

The included remote is a small but effective controller that has all the buttons you’ll need. They’re sensibly laid out and nicely balanced, with the most frequently used controls situated in the centre. As an alternative, you can also control the player using a smartphone or tablet by running the Video & TV SideView app, available for both iOS and Android. 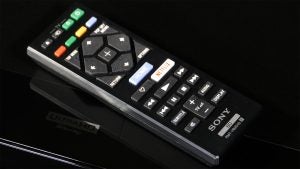 Sony has dropped quite a few features from the X700, so no support for Hi-Res Audio and DSEE-HX upscaling, and no DVD-Audio disc playback either; the former is a shame but the latter probably won’t be missed by many.

However, it still supports SACD disc playback, which is sure to please fans of that format. As for other disc formats, the X700 has you covered with support for 4K Ultra HD Blu-ray, along with CD, DVD, Blu-ray and 3D Blu-ray. The player also includes genuinely impressive upscaling, allowing it to squeeze every last pixel of detail out of lower-resolution disc formats.

Naturally, as an Ultra HD Blu-ray player the Sony UBP-X700 supports 4K, HDR10 and a wide colour gamut in the form of the BT.2020 colour space. It can also convert HDR into SDR, using proprietary algorithms that map the brightness and colour space to older 4K TVs that don’t support high dynamic range. 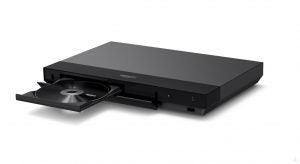 Sony has now added Dolby Vision, thanks to a firmware update. This proprietary version of HDR uses dynamic metadata to change a disc’s peak brightness from scene to scene, resulting in greater detail in both the darker and brighter parts of the image. By comparison HDR10 uses a single peak brightness number for an entire film, which can cause issues with overall brightness on less capable HDR TVs.

Unfortunately the Dolby Vision update wasn’t available when I had the X700 in for review, but has since been released. Sony’s roll-out of Dolby Vision for their TVs has been both late and chaotic, requiring the creation of a new Dolby Vision profile. This might not be supported by some 4K players that already include Dolby Vision, but it is a key feature on the X700.

There is an open-source version of HDR called HDR10+, which also uses dynamic metadata. The X700 doesn’t support this version, and as far as we’re aware, Sony has no plans to add this format in the future. However, since there are currently no discs that actually use HDR10+, the X700’s lack of support is largely moot.

Although the player isn’t certified as a Hi-Res Audio product, it still supports 24bit/192kHz and covers all the popular files including DSD (up to 11.2MHz with two-channel content), FLAC, ALAC, WAV, AAC and MP3. It can also decode lossless Dolby TrueHD and DTS-HD Master Audio soundtracks, as well as bitstream Dolby Atmos and DTS:X soundtracks. 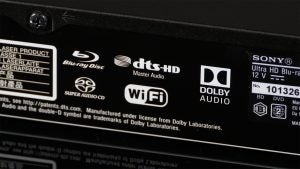 The player is equally as accomplished on the video side of things, offering 4K HDR streaming via Netflix and Amazon Prime. It also includes BBC iPlayer and My5, along with wuaki.tv, Opera TV, the ubiquitous YouTube and the equally common Spotify. There’s fairly comprehensive support for video file formats as well, including XVID, WMV, AVCHD, MPEG2 and MPEG4.

The player offers a simple but effective user interface, built around a series of tiles that allow you to access different services and content. These tiles can be customised, with commonly used apps added and less popular ones removed. 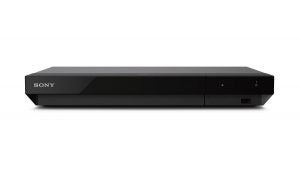 The Sony UBP-X700 is a fast loader, with a disc hitting its menu screen in around 30 seconds. However it’s also fairly noisy, not just in terms of loading but also with navigation and playback. That minor complaint aside, the Sony proved to be responsive and reliable in terms of functionality.

It’s also a stellar performer when it comes to playback, and Ultra HD Blu-rays appear flawless, with the 4K resolution, wider colour gamut and higher dynamic range all perfectly rendered by the player.

The images the player produces are detailed and sharp, with natural colours and no apparent artefacts or other aberrations. A reference disc like Blade Runner 2049 looked stunning, with the Sony perfectly delivering every beautifully composed frame.

We’d expect any 4K player worth its salt to deliver a superb performance with an HDR disc, but the X700 also shines when it comes to regular Blu-ray. The SDR images appear convincing, with accurately reproduced colours and dynamics, but the upscaling also ensures the player squeezes every last pixel out of the Full HD source. 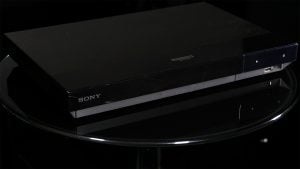 The image is also clean and free from any unwanted processing, allowing the player to take full advantage of a disc like Thor: Ragnarok, reproducing the film’s comic book visuals with accurately saturated colours and plenty of fine detail.

This effective upscaling extends to standard definition DVDs, and a high quality disc can look surprisingly good. How good will depend to a large extent on the size of your screen, but DVD can still be quite watchable in the Ultra HD era. Having said that, it’s hard to go back to standard definition once you’ve experienced 4K HDR; but if you have to, at least the X700 is able to make lower-resolution content look as good as possible.

The X700 is a digital transport, in the sense that it has no analogue outputs. That means there are no DACs, just a digital signal being delivered either via HDMI or the coaxial digital output. Whichever you choose, the player is highly competent, although you’ll need to use HDMI if you wish to benefit from lossless audio and immersive Dolby Atmos or DTS:X soundtracks.

The X700 might not be the audiophile’s choice, but considering its price the player is more than capable of delivering a quality experience. A CD like the recent Manic Street Preachers’ album Resistance is Futile is delivered with all the urgency and drive that we would expect. Whilst the SACD release of Pink Floyd’s Dark Side of the Moon is a beautifully layered 5.1 mix. Streaming music from Spotify or our home network was equally as impressive, proving that the X700 is an impressive digital all-rounder. 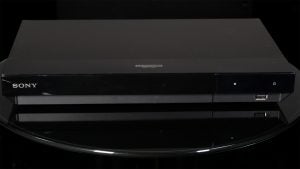 The Sony UBP-X700 is undoubtedly a great choice for anyone who wants an Ultra HD Blu-ray player that can deliver an excellent video and audio performance.

The only real alternative at this price is the LG UP970, which you can pick up for as little as £149. It’s not the flashiest of players, with a fairly barebones user platform, and it doesn’t support SACD playback, but it can handle most other discs and already supports Dolby Vision.