The SRS-LSR20 Wireless Handy Speaker has niche appeal, but it’s an excellent wireless speaker. Portable, easy to use and boasting very good audio reproduction, it’s an excellent speaker for the hard of hearing or anyone else who requires some more clarity from the programmes they watch.

It’s not often we come across a product such as Sony’s SRS-LSR200. It is a wireless speaker that’s designed to work with your TV and boost audio that can be hard to hear.

And you might say, I can connect any wireless speaker to a TV – what’s so unique about the Wireless Handy TV speaker? Well, not only can you listen to TV audio, the speaker can also double up as a remote to operate the TV. It’s a wireless speaker with niche appeal, but it executes its job description brilliantly.

The SRS-LSR200 wireless TV speaker was released in the UK/Europe for £159/€189, replacing the original Wireless Handy TV speaker.

There’s a handle for carrying the speaker and at 182 mm x 77 mm x 87 mm (WHD) it’s a compact unit. With a weight of 630g, its relatively light to carry though it’s heavier than its predecessor. 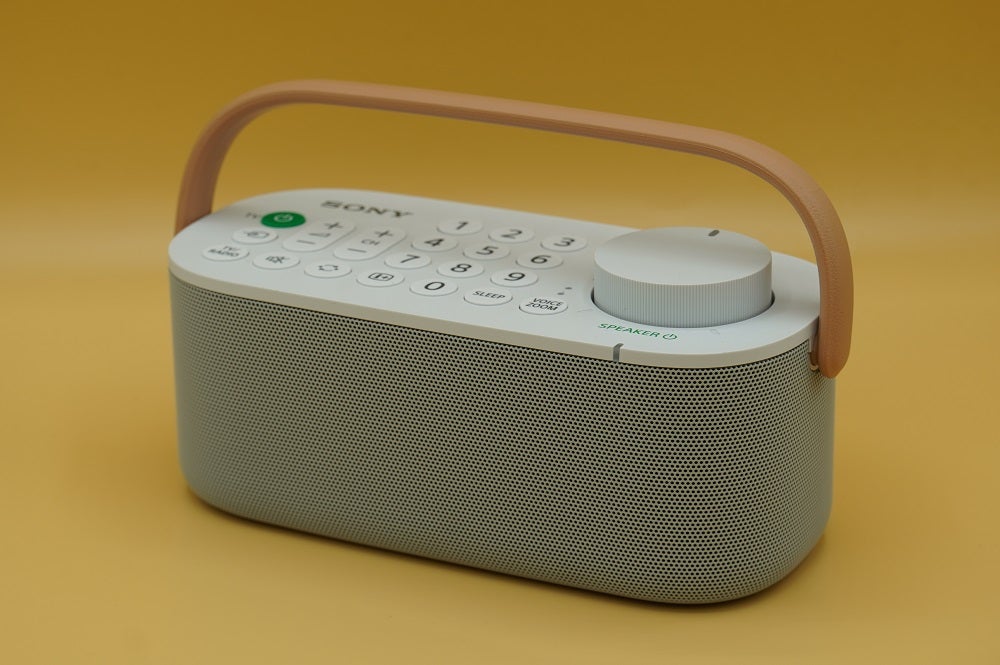 When not being carried the speaker sits in a cradle that has a couple of purposes. One is to charge the unit by drawing power from the mains, and the other is to facilitate connection to a TV via the digital optical input (Sony supplies an optical cable with the unit), transmitting audio to the speaker via a 2.4GHz connection.

The cradle features the aforementioned optical in, as well as power input (USB-C connection) and stereo connection, all of which are colour coded for added clarity. On the underside is a button for pairing the speaker to the TV and a pinhole for resetting it. If you prefer not to bother those around you, there’s a headphone out connection around the back of the main unit. 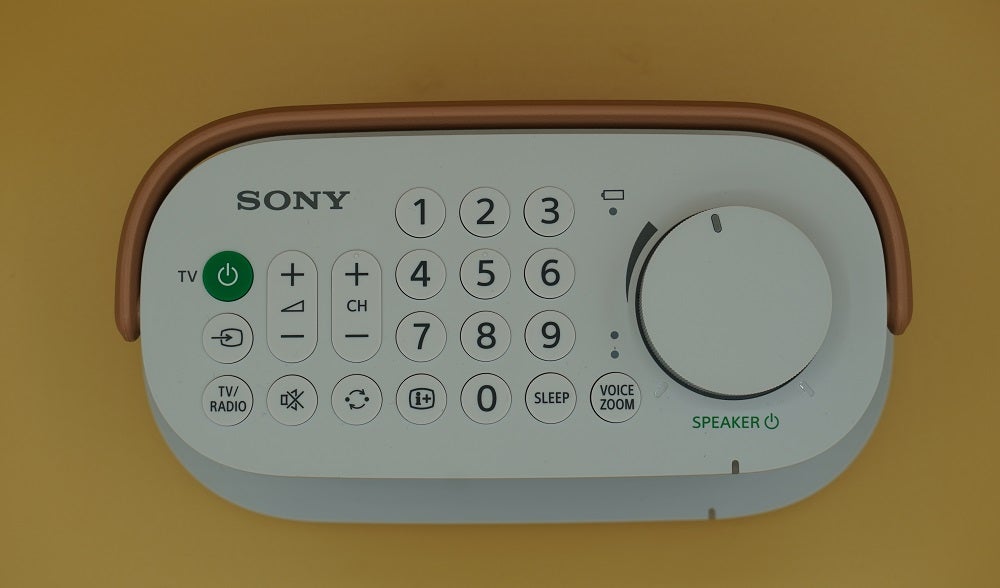 On the top surface is a number pad, on/off dial, a variety of buttons for operating the TV, as well as a battery indicator. Operation is simple with button presses tactile and responsive. The ability to change the volume, channel and source with the Wireless Handy TV Speaker adds to its overall usefulness. That’s not to say it replaces the TV remote completely – for one you can’t dive into the menu settings – but for watching TV it works well.

Set-up of this plug-and-play speaker is fairly straightforward, once you’ve gotten to grips with the instructions in Sony’s manual. One thing to note is that by connecting via optical, the TV’s audio output must be changed to PCM otherwise you won’t hear anything.

Battery life is 13 hours – down from the original’s 16 – though that’s still enough for a solid day’s listening (if not a few). Charging the speaker up to full via the cradle takes three hours, and packaged with the speaker are two plug adapters (UK and EU), 3.5mm, Optical and USB-C cables. 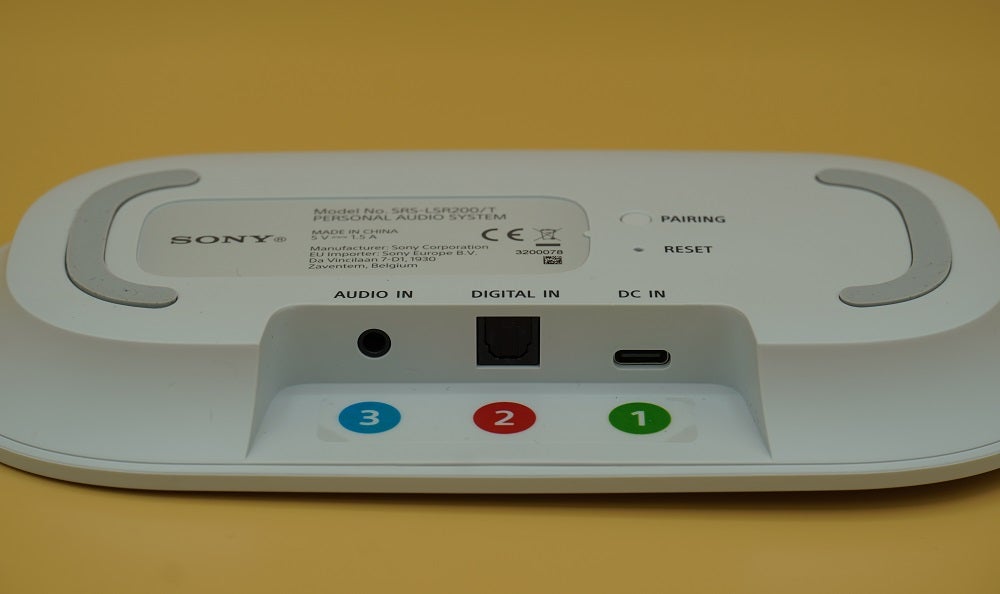 The signal from the cradle is, according to Sony, good for 30m or so. I’m not so sure about that figure, but unless you take the speaker upstairs and away from the TV (and I can’t imagine why you would), the connection proves to be reliable and strong. 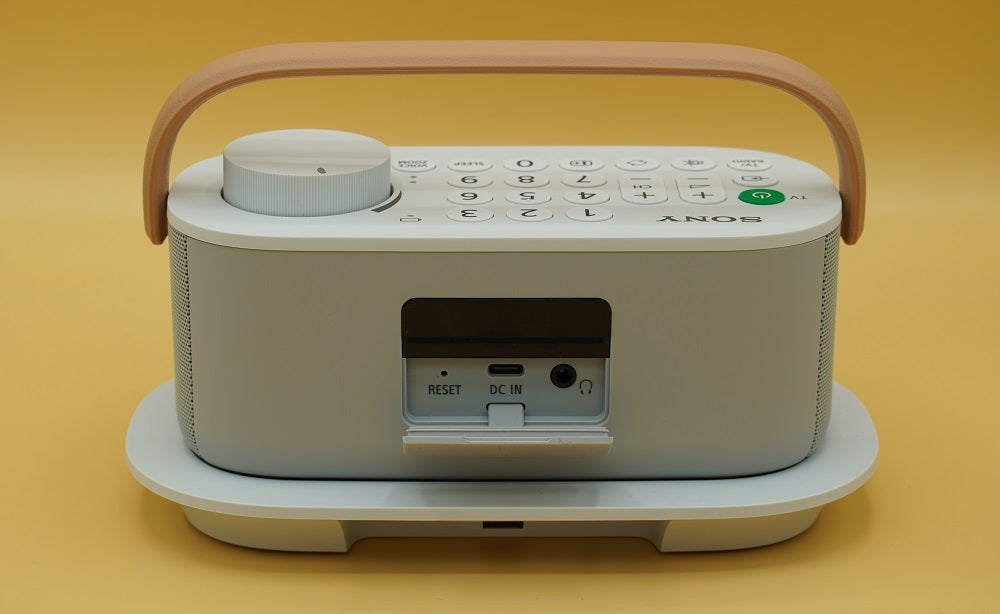 The Wireless Handy TV Speaker also has a bit of character, the friendly-sounding feedback sounds put in a good impression of an electronic toy from the 80s. 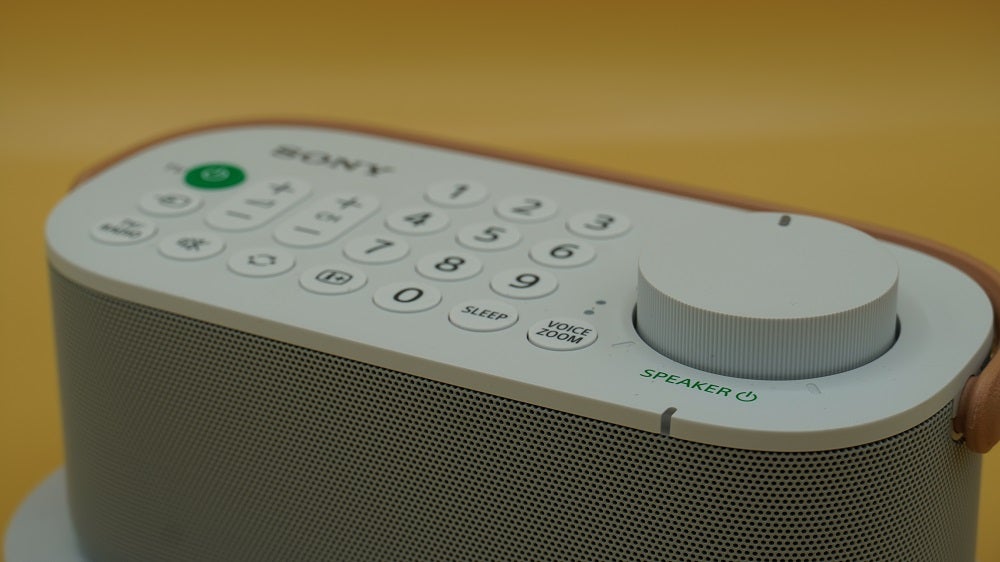 The speaker is compatible with a range of TVs, and in order to set the remote you’ll need to enter a few digits on the number keypad. Sony is the default setting, Panasonic is 40/41, Samsung is 60, and Philips is 50-54. Other compatible sets include LG, Loewe, Hitachi, Toshiba and Sharp. Hisense does not appear to be supported.

The Wireless Handy TV Speaker has a drip-proof rating of IPX2, so you can use it close to a tap without worrying about water (clearly made for those who watch TV while chopping up some vegetables).

Obviously with a speaker this compact the soundstage is relatively small, and you’re not going to use it to watch action-packed films with. But for standard broadcast TV it works impressively well at reproducing stereo content. 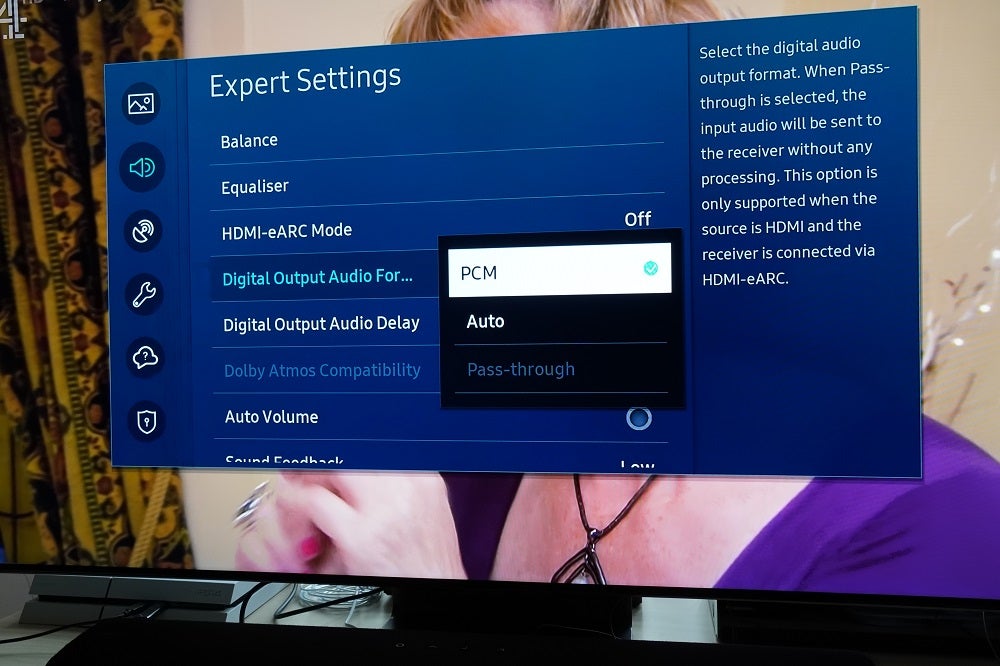 With three integrated speakers that include a dedicated centre for voices, the presentation is bigger than the speaker with good levels of detail and a decent amount of depth, too. It sounds very refined and surprisingly on point in terms of its tonality.

Vocal clarity is great, with dialogue distinct and succinctly rendered, the manner of people’s tone coming across well when watching the Scottish edition of Come Dine with Me. Press the Voice Zoom and it elevates voices further, pushing other sounds slightly further back. Press it twice for a more pronounced effect to make dialogue the core focus. 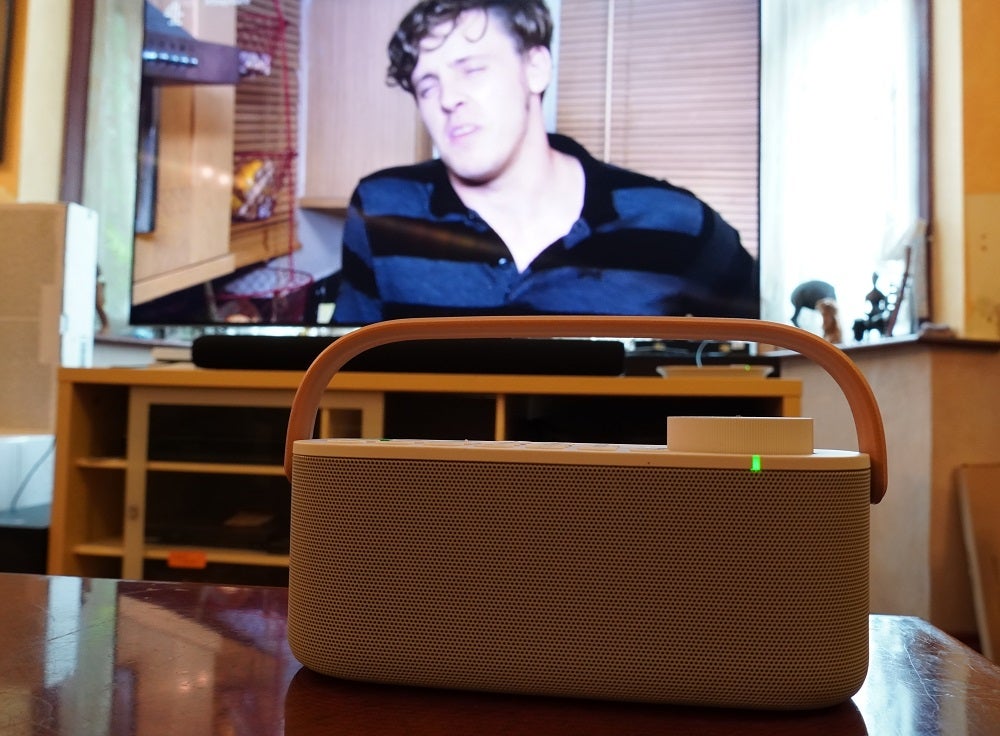 Despite its size it produces a decent amount of bass, and the 2.4GHz low latency connection ensures that what you hear through is in sync with what’s on the screen.

The only issue is a sense of harshness with some YouTube content. That was not a problem with the speaker as the videos were already harsh-sounding to begin with, indicating the Wireless Handy TV Speaker won’t make poorly recorded audio sound any better.

You should buy the Sony SRS-LSR200 wireless speaker if…

Factor in its ease of use and control over various TV functions, and the SRS-LSR200 Wireless Handy TV speaker is an excellent solution for those who want to hear their TV audio clearer.

The Wireless Handy TV Speaker is a product with niche appeal, but it’s an excellent wireless speaker that delivers on its promise of personalised audio. It’s portability means you can ‘bring the TV’ wherever you are, and the clarity of the presentation means you don’t lose much, if anything, in terms of fidelity with standard TV content.

You shouldn’t buy the Sony SRS-LSR200 wireless speaker if…

It’s hard to think of any glaring issues, but it is less suited for more action-heavy or advanced audio tracks. You won’t get much change from the speaker with soundtracks of that nature.