Somewhere out there in the UK, there’s a new group of people that deserve our sympathy. They’re not bound together by any class, religious or ethnic ties. They’re not linked by job, company or hobby, nor do they follow a common team, band, artist or icon. You won’t even find them all within a given county, city or suburb. Nope. All these poor devils have in common is that they’re unlucky enough to live within hearing distance of someone with a set of Sony SRS-DB500 speakers. Whether they own the house next door or rent the flat upstairs, they’re never going to know real peace and quiet again.


These babies are monsters; two satellite speakers dishing out a whopping 75W per channel, backed up by one big brute of a subwoofer packing a mighty 150W RMS. Powered by an S-Master digital amplifier, this is a hideously powerful desktop speaker system. And let’s remember that as we go on; these are speakers designed to sit within a few feet of you on your desk, not distribute sound throughout your living room. If you want a set of these you’re either after speakers that can pack a Tyson-strength punch or you’re so deaf already that nothing else will do the job. 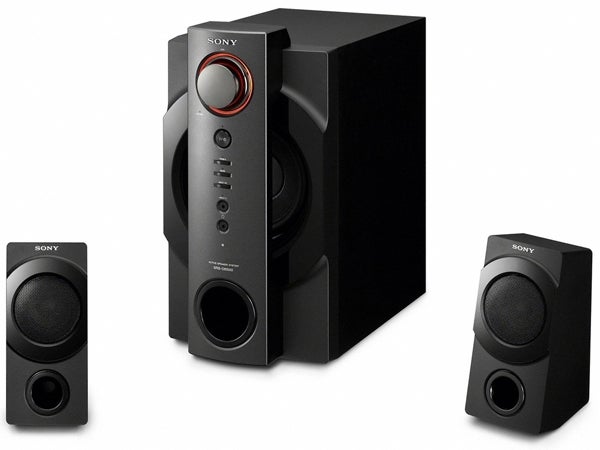 It’s no surprise that this is – literally – a heavyweight system, with the package as a whole clocking in at a mighty 10Kg, give or take 100g here or there. What is a surprise is how much of this weight is down to the sub. The satellites are solidly constructed units roughly 14cm wide, 20cm high and 10cm deep, but they’re actually quite light, weighing in at a mere 700g each. With a 2.5in cone and a bass-port they’re designed to handle the high-end, mid-range and some low-end frequencies, providing a smooth crossover with the sub, but on first acquaintance I wasn’t particularly hopeful. Compare the Sony satellites to the satellites supplied with, say, Altec Lansing’s superb MX5021 set or Logitech’s Z2300 system, then take the bog-standard, bell-wire cabling into account and you don’t come away with much faith that the SRS-DB500 will do its job,


The Subwoofer, however, inspires more confidence. It weighs in at a back-busting 8.5Kg (bend the knees when you stick it underneath your desk!) and, as mentioned earlier, incorporates an S-Master digital amplifier, as found in Sony’s more conventional Hi-Fi and home cinema kit. The 160mm driver at the end of the bass port looks formidable, and nor is it the only thing that does. As with the SRS-GD50iP system we looked at last week, Sony’s engineers have decided to get busy with the illuminations, placing a ring of red light around the large volume knob at the top of the system. Not only does this work as a volume indicator, it also throbs and revolves in time to the music or sound effects your listening to, with three different effects that you can select using the bundled IR remote control (which was sadly missing from my review sample).

Luminous ‘bling’ aside, the controls are simple, with an on/off switch, an input selector and two bass and treble buttons which toggle the volume control between master volume and bass/treble volume respectively. The one area where Sony has gone a bit light is on the sockets. Beyond the two non-standard connectors for the satellite speakers, we get a pair of stereo phono inputs for the main source at the back, plus a single 3.5mm auxiliary input and a headphone socket. This makes a certain amount of sense if you’re hooking up a games console, media player or Blu-Ray/DVD player as your main source, but it’s weird to hook up a set of desktop PC speakers to your PC using the slightly messy auxiliary input at the front.


Note that mention of hooking up a games console, however, because games and movies are where the SRS-DB500 system’s strengths lie. It’s not that Sony has produced a bad system for listening to music; far from it. I was pleasantly surprised by the amount of clarity and detail produced by those underwhelming satellites, and with punchy, pop or rock material the output really isn’t bad at all. The system creates a fine, wide soundstage with great positioning, and both Radiohead’s There, There and Massive Attacks Inertia Creeps sounded brilliant, with good instrument separation and lots of impact. 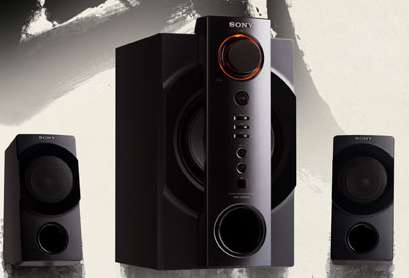 However, the more music – and the more varied the music – you listen to, the more you become aware of the system’s limitations. There’s sibilance to cymbals and a boxed-in note on jazz piano, brass or orchestral strings. Vocals and acoustic guitars sound great, but listen to something more complex or dynamic and the sound takes on an odd, processed edge.


Most of all the bass, while powerful, isn’t actually that well defined. That cavernous bass you come across in so many Massive Attack tracks works well, but the acoustic bass in the Bill Evans Trio’s working of Some Day My Prince Will Come lacks focus. Too Far from your Weapon, my highlight of The Dead Weather’s Horehound, has a swampy atmosphere, but the lack of precision translates to a lack of bite.


Plug in your PS3 and put in a game, however, and it’s a very different story. I took the SRS-DB500s for a quick spin through THQ’s heavy metal take on Zelda, Darksiders, and the results were incredible, the mighty blade of the game’s anti-hero, War, slicing through zombie flesh and demon bone with a heroically gory chop and crunch sound, while the noise of wind, distant moans and ambient gurgling created an incredibly immersive experience. If – like me – you spend more of your gaming time sat in front of a desktop monitor than in front of a TV, then the SRS-DB500s are easily good enough to make you wonder whether surround sound isn’t over-rated.

This view was confirmed by a quick session on Army of Two: The 40(sup)th(/sup) Day. I’m not a huge fan of the game, but if you want mindless violence, this does it, and the cacophony of shotgun blasts, machine-gun fire and shouting was enough to have my better half hammering on the door and threatening all kinds of unpleasant repercussions if that racket did not STOP RIGHT NOW! This, frankly, is exactly the sort of thing that you buy a really big set of 2.1 speakers for.


It’s a similar tale with movies. I don’t think I’d want to have the SRS-DB500s set up to watch, say, Sense and Sensibility or Mamma Mia (you’d want to watch Mamma Mia at all? – ed), but with Terminator: Salvation in the PS3 and the sound cranked up the system’s no-holds-batted, belt-it-out approach has real appeal. With the satellites less than three feet from you the sensation is akin to being in a post-apocalyptic warzone. In fact, were you in a real post-apocalyptic warzone, there would probably be less danger of your ears falling off. 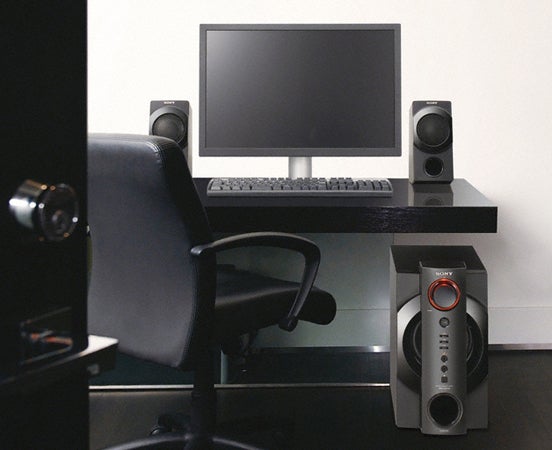 Still, as you might have gathered from the first paragraph, this is both the strength and weakness of this system. The SRS-DB500s sound okay with the volume dialled down, but they really only sound good with the volume turned up to midway or above. The problem is that once you have the volume turned up midway or above, you’ll lose your hearing and everyone in the vicinity will hate you. For a pair of desktop speakers this doesn’t necessarily make an awful lot of sense, and – were I spending my own money with a continuing interest in co-habiting with my nearest and dearest – I’d be more tempted to go with something a little more precise, versatile and not quite so noisy, like Creative’s GigaWorks T3 set or the 2.0 GigaWorks T20/T40 systems.


The SRS-DB500s actually seem more sensible if used with a console to replace under-powered TV speakers, but here I’d counsel you to see if you can track down the aforementioned Altec Lansing MX5021 or Logitech Z2300 sets, which to my mind produce slightly better results. The SRS-DB500s are still amongst the best gaming speakers I’ve ever come across, but sometimes you have to ask yourself: is this much power a good thing? Some buried, boyish part of me still thinks so, but another part of me is not so sure.


Big, beefy, somewhat brash speakers with the right credentials for big action games and movies. However, this isn’t the most musical or versatile system out there, and it’s arguably too damn loud for desktop use.