We were mightily impressed with the Sony PRS-505 eBook reader when we reviewed it back in October last year, and to be honest there hasn’t really been anything to outdo it since. Rival devices have been either too expensive or too poorly built to mount a serious challenge. Now Sony is back with a new model and as the name suggests, this one attempts to improve on the PRS-505 by adding touch support to the screen. 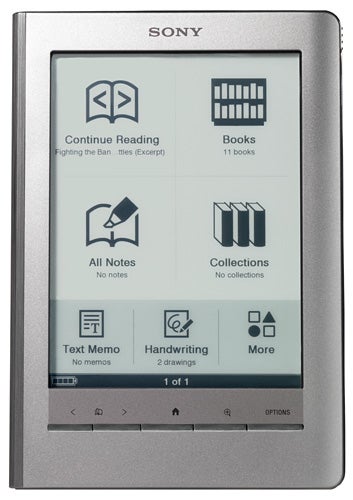 The PRS-600 looks quite different to Sony’s previous eBook readers. Whereas earlier models had more buttons than a pearly king and queen, this one is a much more Spartan affair with just five long, thin buttons lined up beneath the display. Of course, this has been made possible due to the touch nature of the screen, with the user interface relying largely on touch input for navigation, which is no bad thing in our book (if you’ll excuse the pun). The buttons may have largely disappeared, but thankfully the excellent build quality remains.


Like the PRS-505, the PRS-600 is hewn from metal rather than the plastic used by most of its rivals and as such feels much sturdier. The design is also the best so far, as less buttons equals a sleeker and more minimalist look that really shows off the sexy aluminium finish at its best. However, the metal chassis does add weight making it heavier than competing devices like the Bookeen CyBook. Whereas the similarly sized Cybook Gen3 weighs 174g, the Touch Edition is heavier at 286g and certainly feels more weighty when you hold it in your hands. 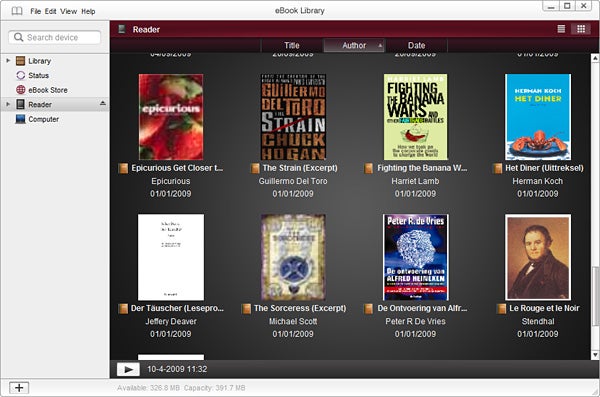 One of the criticisms of the PRS-505 was Sony’s decision to go down the route of creating its own proprietary BBeB format for books bought over the web, but the PRS-600 has much wider format support. Along with BBeB, it also handles EPub and Adobe Digital Editions for eBook purchases, alongside other non-DRM formats like PDF, MS Word, RTF and TXT files.


Getting books and other files on to the reader is pretty straightforward. This is partly because the installation software is stored on the eBook reader, so as soon as you connect it to your PC the installer automatically launches. This loads the eBook Library software which acts as a file manager for the device letting you sync documents, notes and audio files back and forth. The software also acts as a gateway to the online book store where you buy commercial titles. It’s all pretty straightforward to use and files are quick to sync via USB. The PRS-600 has 512MB of ROM onboard, and 380MB is left free giving you space to store around 350 books. However, there are also slots for Memory Stick and SD cards, so it’s easy to add additional storage if you feel the need.

Of course, the most interesting aspect of this eBook is its 6in touchscreen. The display is very different from traditional LCD touchscreens. Like most eBook readers it uses a technology called eInk. This produces a very high contrast, monochrome image with a resolution of 800 x 600 pixels that looks absolutely rock solid and doesn’t strain your eyes even after long periods of constant reading. It really is incredibly close to the printed page in terms of readability. That said, the one used here is more reflective than the one used on the PRS-505 with the result that it’s a fair bit harder to read in bright light or direct sunlight. We guess this extra coating had to be added because of the touch layer underneath, but it’s still a tad annoying.

Nevertheless, the touch layer means that you can now press directly on the screen with your finger to select the titles you want to read or move through the various menus. This makes the device much faster and easier to use than most other eBook readers. The touchscreen also lets you enter text via an onscreen keyboard or use the stylus to make handwritten notes and annotations in the books and articles that you read. Once you add a note to a page a dog ear graphic appears in the top corner to show that the page has been annotated. These notes are also transferred to your computer when you sync the device with your PC using the eBook Library software. 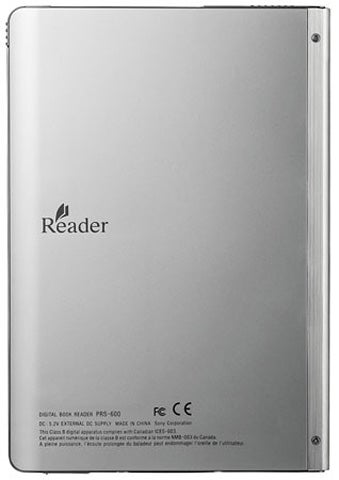 Although the touchscreen generally works pretty well, it’s certainly not perfect. For starters you have to press harder on this display than you would on a normal LCD screen to make sure your input is registered. Secondly, as the eInk display is very slow to update, you’ll often find yourself waiting for it to catch up with you when you’re typing on the onscreen keyboard or drawing freehand, which is quite disconcerting and takes a while to get used to.


That said, when it comes to page turns (which are activated either by making a swipe gesture across the screen or using the two buttons at the bottom of the display) the PRS-600 is up there with the fastest eBook readers. Moving between the five font sizes is also relatively quick, but there is an annoyingly long pause when you first load a plain text file as the PRS-600 works out how to flow the text.

The PRS-600 also plays audio and music files, but only in MP3 and AAC format. The audio player is extremely basic, but you can play music in the background as you read and although no headphones are supplied with the device, the audio output quality is a lot less hissy than other eBook readers we’ve used.


Because of the nature of the eInk display where power is only used to draw the initially image, not to keep it displayed on the screen, battery life is measured in page turns. Most eBook readers manage a huge number of page turns from a single charge and the PRS-600 is no different in this respect. Sony rates its battery as being good for 7,500 page turns. Obviously if you use it to play music as you read this will be reduced somewhat, but even so we found that the PRS-600 managed to last the equivalent of a week without needing a recharge. 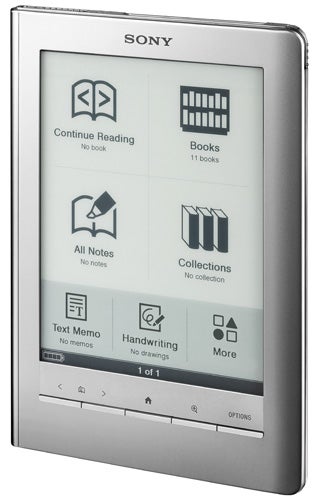 Unfortunately, there’s no charger supplied in the box so instead you have to charge it via a USB lead from a PC or laptop with a full charge taking four hours. However, there is also an optional charger available that connects to a dedicated charging socket on the Reader and reduces the charge time to just two hours. We do think it’s a bit cheeky that this isn’t supplied as a standard accessory.


Another slight downer is the fact that the device still doesn’t include any wireless functionality. It lacks the Wi-Fi support found in the iRex ILiad and is also missing the mobile data support offered by Amazon’s Kindle. Sony will address this with the forthcoming Daily Edition, which along with the touchscreen will feature built-in 3G. However, you are likely to have to pay considerably more or this luxury.


The PRS-600 doesn’t quite reach eBook reader perfection, mainly because the screen is more reflective than we would have liked, but we do think it comes awfully close. The touchscreen control and better laid out menus make it much easier and faster to use, while the build quality and battery life remain as good as ever. As a result we think it’s the best eBook reader on the market right now and thoroughly deserving of our Recommended award.