After causing a storm of press interest – and clogging up Sony’s stand with intrigued onlookers – at the CES in January, Sony’s unique Personal 3D Viewer concept has now been confirmed for a European release.

The Personal 3D Viewer is essentially a visor containing two screens – OLED ones, no less – able to show 3D footage that fills your entire field of vision. And which moves with you when you move your head, so that the 3D ‘connection’ is never broken or distorted.

The rather cumbersome eyewear also includes a pair of quite decent quality headphones, so that you can immerse yourself in the 3D world sonically as well as visually.

To be fair, while the latest form of the Personal 3D Viewer is still a fairly substantial bit of kit for something you’re supposed to stick on your head, it does look nice in an emphatically geeky kind of way, with its sleek white finish.

The undeniable bulk, though, certainly makes for some immediate comfort issues. The bands around the back are an improvement over the CES design, and fit around your head easily enough. But the visor still feels very heavy and unbalanced on the front of your face, sliding down to the end of your nose and squashing it in quite alarmingly! 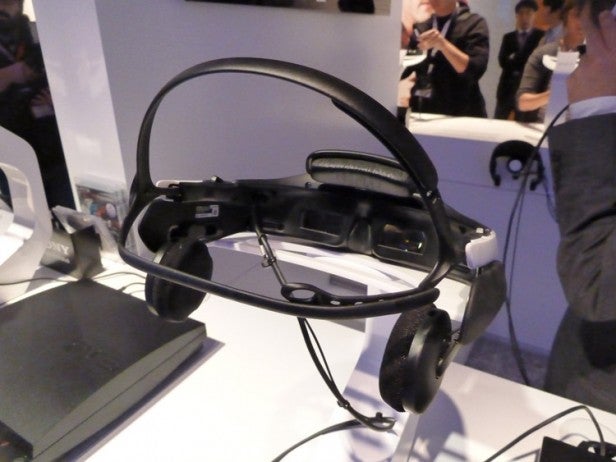 We did manage to improve things once we’d figured out which of the many different sections of the Viewer controlled the tightness of the rear/side headbands, but there was still a distracting feeling of your head wanting to tilt back all the time to compensate for the weight on its front. We also suffered during our hands on with quite a bit of light seeping in around the goggle’s edges, despite reasonably plush black pads being fitted around the lens section.

At first we couldn’t really understand just why the Viewer should have to be so large; after all, OLED screens can be paper thin, right? The problem, of course, is that in order for the two screens to be able to converge properly to produce a 3D image, they need a little distance from your eyes. Darn.
While the latest iteration of the 3D Viewer might still not exactly be comfortable to wear, though, it does perform much more engagingly than the January prototype we played with at the CES. Right away the picture looks much crisper, thanks to clearly improved convergence between the left and right images, and much less crosstalk (double ghosting) noise with 3D sources than we’d seen before.

The picture also looks brighter and more colourful, with richer contrast, and even motion is improved, with less of the quite overt blurring that proved so troubling at the product’s CES introduction. The net result of all this is that the picture just about looks HD now, which is a huge improvement  – and much less tiring on the eyes. The image also seems to contain a bit more depth than we saw with the CES version. 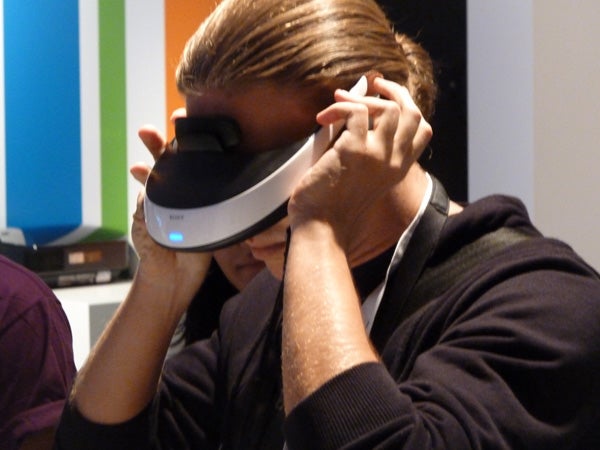 Appreciated, too, is the way the picture stays locked resolutely in front of your eyes if you move your head while wearing the headset, adding an almost ‘virtual reality’ element to your viewing experience that’s almost disturbing until you get used to it. Particularly excellent, of course, is the fact that the 3D Viewer lets you lie down while you’re watching it without any awkward viewing angle issues…

While the latest 3D Viewer is a vast improvement over its first iteration, though, there are still one or two significant flaws. The worst is that that the picture clearly loses focus towards its edges, which kind of draws your eyes more to the central section, to the detriment of the overall 3D effect.

There’s pretty clear evidence, too, of shimmering over contoured edges and areas of very fine detail, and also a pity is the width of the black border around the image, which joins with the light seeping in around the lens ‘fitting’ and the sheer weight of the goggles in upsetting the immersive sensation the goggles otherwise strive so hard to achieve.

Add a somewhat scary £800 likely price tag when the Personal 3D Viewer launches and we’re not entirely convinced that planes and trains the world over are suddenly going to be invaded by a tide of goggle-wearing 3D game and movie fans. That said, the gadget lover in us still has a soft spot for them, and Sony certainly deserves kudos for improving the concept so comprehensively since its first showing earlier this year. Fingers crossed they might even be able to squeeze a few more improvements in between now and the Personal 3D Viewer’s mooted November launch.