You’ve got to hand it to Sony. The iPod may still be the portable music boss, but it’s still trying to take Apple’s baby out. That said, it was some time before it seriously plucked up the courage to try with the release of the NW-HD1. That was back in late 2004, which was followed only a few months after by the NW-HD3. Now yet again, Sony has produced another hard disk based unit, again skipping a number to produce the NW-HD5. 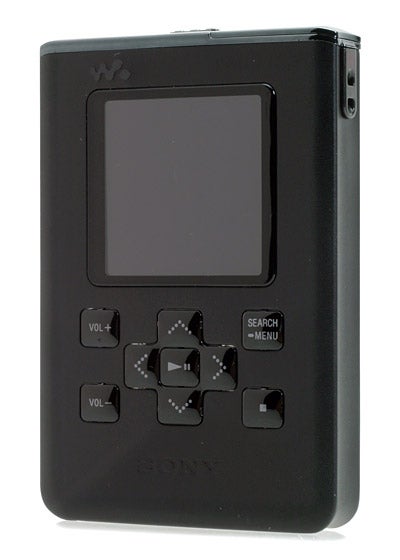 So what does this one bring to the table and has it done enough to really put the boot into the iPod? Well, yes and no. Sony has revamped the design once again and come up with a device with a distinctive look that might not appeal to all. As far as specifications go it’s another 20GB player and while the dimensions have shrunk very slightly since the HD3, it’s actually 5g heavier at 135g. It’s still not as svelte as the 112g HD1 however. Even so, it’s a lot leaner that the iPod, which since the demise of the mono-screened version is only available at a relatively portly 167g. With its brushed metal finish, the NW-5 does feel quite solid in the hand though some may balk at the thin flap covering the USB and AC power connectors at the top. There’s also a space for a Sony remote control but there isn’t one included in the box. Nor is there a cradle, Sony having dispensed with it after the HD1. A small fabric cover is provided but there’s no belt clip holder included. 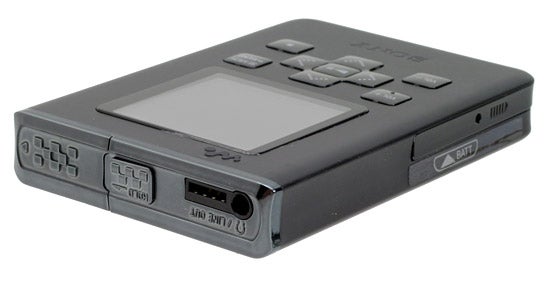 Numbers are also up as far as battery life is concerned with Sony quoting a maximum of 40 hours. This is a theoretical maximum of course, based on 13,000 tracks encoded at a bit-rate of 48 Kpbs. This is not really sensible of course and Sony does at least quote a more realistic 30 hours for MP3 at 128 Kbps. Even using higher bit-rates you’ll still enjoy far greater staying power from the Sony than an iPod. The battery is also removable, a nut that Apple is yet to crack, ensuring that when it does start to get knackered it’s a simple job to pop open the side and insert a new one. Let’s hope that Sony doesn’t charge the earth for a replacement. Despite the bundled AC adaptor, the player handily charges over USB, taking six hours to do so.

The biggest change over the HD3 though is the design. While the iPod display is now colour, Sony has yet to enter that territory and has gone for a dot matrix with white text on a black background. This looks rather smart though not quite as easy on the eye as the iPod display. It can also be reversed (black on white background) but this didn’t look right to me. Of course this may well depend on the colour of your unit. While my review sample was a cool slab of black the NW5 can also be picked up in silver and rather differently, in red. 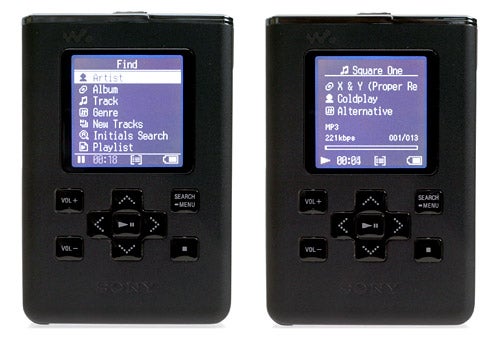 The display is seven lines long providing plenty of room for displaying information such as the track name, album, genre and bit-rate among other things, at the same time. Underneath the screen are distinctive controls laid out in a plus shape, with two extra buttons on either side. These have a rather strange plastic bubble feel to them and seem unnecessarily small, which may displease the fat-fingered.


(Update: It has been pointed out to me that many NW-HD5 owners have had these buttons crack, even after a couple of days use. This has not happened on my review sample even after a few weeks but it seems only prudent to alert readers to this problem. A database has been set up for owners to report the issue on this page and there’s also a link to a forum thread about it).


One neat trick is what Sony dubs its ‘Follow turn’ feature. This enables you to change the orientation of the display so you can use it on its side if you prefer. This can be done manually, or if you select the ‘Auto’ setting and then turn the player off at the desired angle, the display will then magically swivel itself round when you turn it on again. It’s not an essential feature but its nifty enough to show off to your mates.


Either way the interface is good, if still not as good as Apple’s wheel based system. To move between albums and artist you need to use the arrow buttons around the central play/pause button and though it’s logical it’s sometimes confusing as to when you have to push back and when you have to push up. At first I often moved to the beginning of a track when I meant to browse the track listing but I soon got used to it. 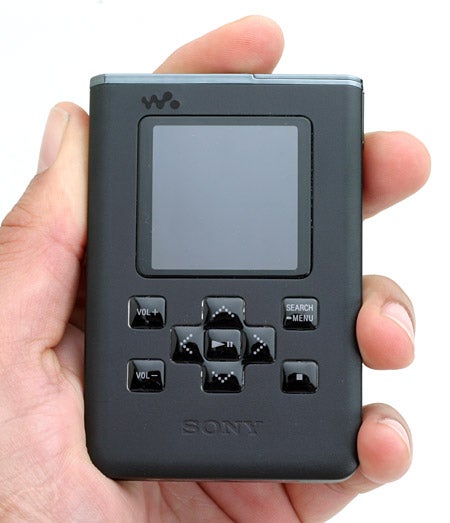 Sony’s previous players were seriously hindered by the bundled SonicStage software, which was simply legendary for its awfulness. Since we last saw it, SonicStage has moved on from version 3.0 to 3.1 and largely is just as weird and unwieldy as it always was. It frankly amazes me that a company the size of Sony can’t devote enough resources into making great software but with some effort and patience it is usable. The great news is that Sony, consumer entertainment giant that it is, seems to have finally mastered the concept of playlists. Previously playlists were named ‘Compilations’ and involved copying tracks over to the player each time they appeared in a playlist, wasting time and disk space. Thankfully it doesn’t do that anymore. Genius. 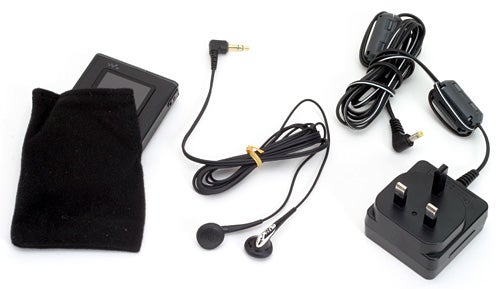 SonicStage also managed to crash on me once – something that iTunes has never done. But while SonicStage may be a poor stunted thing compared to iTunes, the NW5 is undeniably a great sounding player. Tracks encoded in MP3 sound noticeably better than they do on my third generation iPod, giving them a new lease of life. I also conducted some subjective listening tests using ATRAC3 and ATRAC3 Plus. Of course this was on my own excellent sounding Koss Porta Pro’s as opposed to the small earphones included in the box. (First rule with any portable player is, ditch the bundled ‘phones and get a decent pair). The default encoding method in SoncStage is to Atrac3Plus at 64Kbps. This is decent but not fantastic – equivalent to 128 Kbps MP3. The next higher quality Atrac3Plus setting is 256 Kbps. It’s quite a hike in terms of file size but it does sound superb. Below this is plain ATRAC3 at 105, and 132Kbps and personally I’d go with the latter as it gives the best trade off between quality and capacity. If you prefer a more universal format SonicStage can now rip straight to MP3 and will convert WMA tunes on the fly. If you also like to download paid for legal tunes SonicStage will take you to Sony’s Connect Store. Tracks here will be downloadable in DRM encoded Atrac3 format. 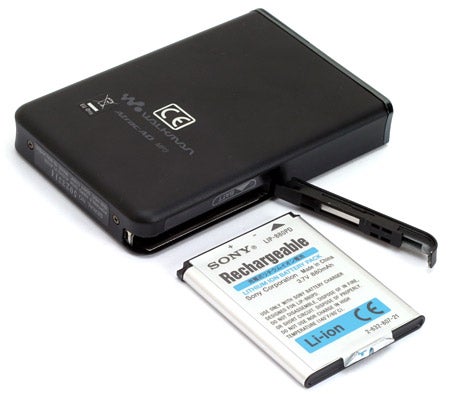 
What the NW-HD5 doesn’t have is extra features such as an FM tuner or a microphone which will probably put off those who want their MP3 player to offer kitchen sink functionality. However, the thought of having to use SonicStage may put off even more people.


In hardware terms though the Sony is a lean mean little player that knocks spots off the iPod in terms of size, battery life, sound quality and even price. You can pick the NW-HD5 up from Komplett for only £169 (silver and red only) – 40 quid less than the 20GB iPod. Granted it still doesn’t have the same unquantifiable cool but then there are an awful lot of people who aren’t members of the iPod fan club. Whether the thought of going Sony will appeal to them any more is debatable though and the look and the interface of the NW-HD5 may be too quirky for some.