Sony is, without a doubt, masterful when it comes to building sexy and desirable consumer electronics devices. For a while it looked like there was no aspect of the CE market that didn’t turn to gold when Sony touched it, producing super-stylish designs that just oozed desirability. But Sony products were never just about design, there was always solid functionality behind the good looks. With this in mind, it always surprised me that Sony still hadn’t produced a digital music player that was worthy of the brand.


Design has never been a problem with Sony’s digital music players, they’ve always looked good, but functionality has never been all that it could be. Part of the problem was that Sony refused to enable its devices to playback MP3 files, forcing everyone to have to convert any MP3 content to ATRAC. Not only was this a laborious process, but it also meant that you had to have two separate music libraries on your PC, taking up lots of space. The other problem was SonicStage – Sony’s proprietary music manager – which was just plain horrible to use. 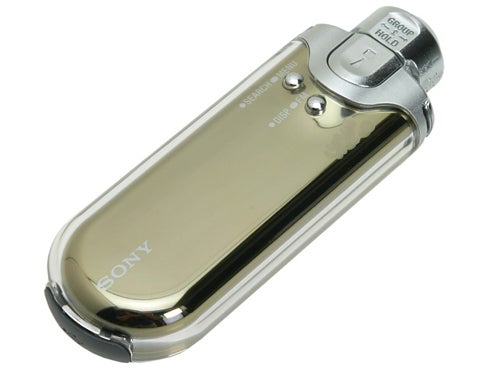 Recently Sony has addressed the biggest bugbear, and enabled its players to playback MP3 files natively. While it has also refined SonicStage into a more usable piece of software. Both these points have helped the NW-E507 to be the best digital music player that Sony has ever produced, and finally a device that’s worthy of the Sony brand.


First things first – the NW-E507 looks absolutely stunning. Finished in brushed silver and Champaign gold, the NW-507 definitely falls into the gadget eye candy category. Most people who saw it thought it was a cigarette lighter at first, but I always thought it looked like a small perfume bottle. The bottle theory is borne out by the fact that you can set the display to show bubbles rising from the bottom to the top of the device while you’re listening to music.


The mirror-like Champaign gold fascia looks plain, but there is an OLED display hiding behind it. In this respect the NW-E507 reminds me of the iRiver N10, which also hid its display behind a mirrored fascia. Also like the iRiver, the display on the Sony is superb. It’s a three line affair that will display the track name, artist, play time and battery life – although that’s in the main display. If you fancy something a bit different you can set the NW-E507 to display a set of dials relative to the track being played, or even the aforementioned bubbles.

There are two small, round buttons on the fascia – one marked search/menu and the other marked disp/FM – pressing the button quickly will activate the first function, while pressing it and holding it will activate the second. Just to the right of these two buttons is the main play/stop button, which is also used to select options in the menu.


But it’s the main navigation control that brought back misty eyed memories of my old MiniDisc Walkman. The main control is cylindrical and twists left and right to scroll through menus or skip through tracks – just like the remote control on Sony’s old MiniDisc Walkmans, but the method has definitely been improved upon. Not only does the controller twist from side to side, it can also be pulled up and down two clicks. 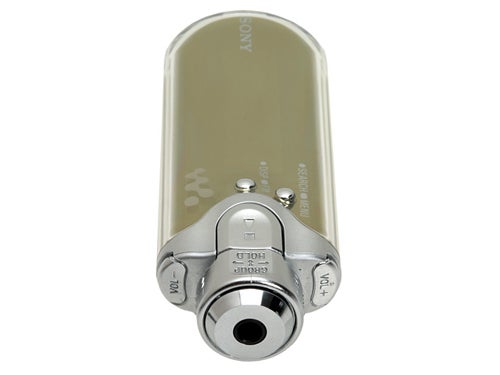 With the controller closed completely, the NW-E507 is in “hold” state, so none of the controls or buttons will work. Pull it out one click and the player is active, and twisting left and right will skip between tracks. Pull it out two clicks, and the player is in Group navigation mode, so twisting left and right will skip through entire albums or artists. The latter is pretty handy for jumping to the next album or artist when you’re bored, and saves you having to go through the main menu when you need a change.


Flanking the main controller are the volume plus and minus buttons, while at the rear is a repeat/sound (EQ) button. Having a dedicated EQ button is a huge bonus, since changing your EQ setting can often bee too much hassle to bother with – even on a device that’s as user friendly as an iPod. However, you can only choose between two user defined EQ settings and no EQ at all – although to be fair, I found that switching between two user defined profiles was adequate.

So, you’ve got a device that looks stunning and has superb usability, but how does it sound? In a word, brilliant! To be fair, the sound quality from Sony devices has always been good, simply because the ATRAC codec is far superior to MP3 – record a CD at 132kbps ATRAC3 and you’ll barely notice the difference from the CD, record at 256kbps ATRAC3 Plus and I defy you to be able to tell the difference from the original disc. Of course you’re not going to record at 256kbps, because the resulting file size is too large, but even 64kbps ATRAC3 Plus sounds easily as good as 128kbps MP3. 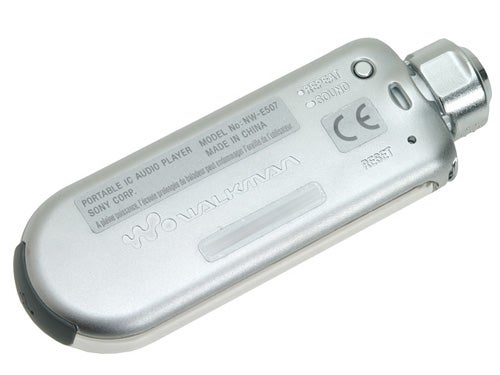 But even MP3 content sounds great on the NW-E507. I played back a variety of MP3 files and I have to say that the sound quality from a 192kbps track was very impressive, while even a lowly 128kbps rip sounded good. But there is one caveat to this story – the sound quality from the NW-E507 is awesome, if you’re using good headphones. The bundled ear buds that come in the box sound muted and muffled, while the cable is also a bit too short. But when I plugged in a set of Sennheisers, the difference was astounding. I know that I always say that bundled headphones are weak, but in this case don’t even try them – you need to invest in a decent set of headphones to experience the best from this player.


But there’s another area where the NW-E507 sounds great, and that’s the built-in FM tuner. Now, the TrustedReviews office is notorious for bad reception over the airwaves, and I’ve yet to find a digital music player that can lock onto even a patchy signal while sitting at my desk. However, without even trying the NW-E507 located a station, and proceeded to pump crystal clear sound to my ears. Of course it’s worth remembering that a good set of headphones matters here too, as the headphones and cable act as the antenna for the FM radio – so once again I got far better results from my Sennheiser headphones than from the bundled ear buds.

At the base of the NW-E507 is a plastic cover that hides the mini-USB port. This is used for both data transfer and charging. And talking of charging, Sony claims that you can get three hours of playback time from only three minutes of charging – pretty cool if you’re on your way out and find that the battery is flat. That’s unlikely though, since the battery life is truly astonishing. I took this player out to Taiwan with me while I was attending Computex. I charged it up before I left and used it pretty much every day, as well as for hours on the plane, and it was still going by the time I got back! Sony claims 50 hours continuous playback, although that’s when playing ATRAC3 at 105kbps – but even if you knock 10 hours off that time for playing MP3s, it’s still damn impressive. 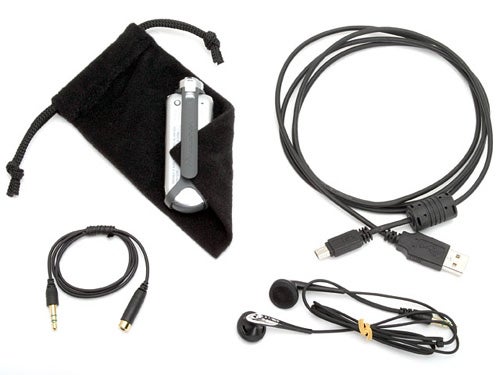 As well as looking great, the NW-E507 is also very light and small. Weighing in at only 47g and measuring 84.9 x 28.8 x 13.9mm (WxHxD), you’re hardly going to notice this baby in your pocket. Strangely, Sony doesn’t supply a neck strap in the box, despite there being a hole for that purpose on the device. It’s clear that this player should be dangling from your neck, and putting all those iPod Shuffle users to shame, so it’s worth getting hold of a lanyard and doing just that.


What you do get in the box is the player itself, a mini-USB cable, the headphones complete with very short extension cable, a carry pouch and a belt clip. The latter fits snugly around the NW-E507, but I found the clip to be less than confidence inspiring – twice I tried to attach it to my belt, and twice the player fell off while I was walking. I’m lucky that this device is so light, so it ended up dangling from the headphone cord, rather than smashing on the floor.

Software wise, you get SonicStage version 3.0, which is a definite improvement over previous versions, but still nowhere near as good as MusicMatch or iTunes. Sony still hasn’t managed to address the playlist problem with its devices. You can create a “Group” under SonicStage consisting of tracks that are on your player, but rather than copying just the playlist data over, SonicStage will copy all the tracks over again, despite the fact that they are already there. You can of course create a Group directly on the player, but then the tracks you choose are actually moved from their original locations, to the new Group – so next time you play an album, the track that you put in your Group won’t be there anymore.


To be fair though, the whole playlist issue isn’t as important with a flash based player, and with 1GB of storage, you’re likely to be copying over mixed folders anyway, and changing them regularly. And let’s not forget that the iPod Shuffle offers no control over your music whatsoever, let alone playlist functionality. 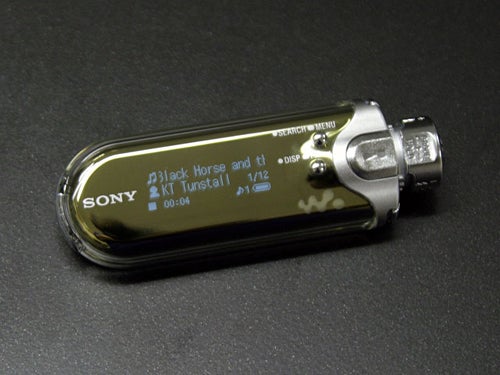 Of course it’s not all about design, style and functionality; there’s another important factor to consider – price. At just under £150, the NW-E507 is around 50 per cent more than a 1GB iPod Shuffle. But this device offers so much more than Apple’s flash based icon. Not only does it look better, have more functionality and sport a superb display, but the NW-E507 also boasts over four times the battery life of its little white competitor.


The Sony NW-E507 demonstrates the old saying “you get what you pay for”. It may be more expensive than the iPod Shuffle, but in my opinion it’s worth every penny. Given, I still prefer to have all my music with me, which is why I have an iPod in my bag. But I have to say that the NW-E507 is a far more gym friendly device – hanging it around my neck I hardly noticed it was there while I was working out. In fact, I’d go as far as saying that this is the best flash based digital music player I’ve ever used.