The UK launch of the Sony NSZ-GS7 Internet Player found your intrepid Trusted Reviews reporter feeling seriously untrendy. On this grand occasion, as the first Google TV box arrived in the UK, our default blue jeans/black shirt ensemble was thrown into particularly drab relief by the extraordinarily colourful setting of one of Google’s London offices.

As if the bright red, weirdly shaped chairs in the reception area weren’t damaging enough to our sartorial confidence, we even found ourselves being led past a selection of meeting rooms based on Brighton beach huts. Frankly we’d have felt more comfortable in a pair of polkadot speedos. 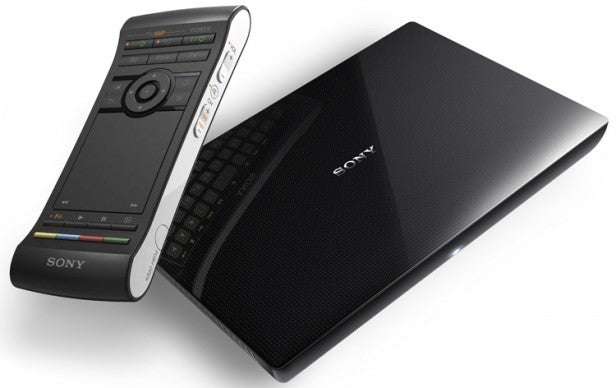 Moving swiftly on from that entirely unnecessary image, we eventually ended up being led into a thankfully much more normal room where we brought face to (TV-friendly inter)face with the purpose of our visit: Sony’s new Google TV set top boxes.

Dedicated readers may know that we have actually seen these intriguing new gizmos before, during our visit to Sony in Japan back in February. But there we mostly just got given a demo. Here we’re able to actually have a play for ourselves, to get a better feel for how the Google TV experience is shaping up now that the first of Sony’s two Google TV products, the NSZ-GS7 Internet Player, is fast approaching launch.

The official in-store date for the Sony NSZ-GS7 is July 16th – though you can actually pre-order one through Sony’s website already. The NSZ-GP9, which adds a built-in 3D Blu-ray player and voice recognition system, isn’t going to be out until October, with a likely price tag of £300. 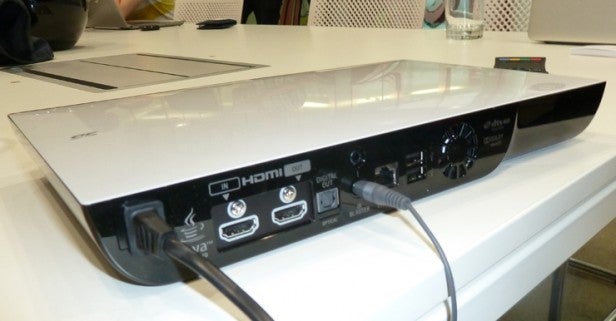 The imminent Sony NSZ-GS7 Internet Player will set you back £200 – a price that bags you a strikingly small set-top box with a strikingly large remote control. Obviously the small size of the main box is a big advantage in a world where set-top boxes seem to be going out of fashion as TVs offer more and more functionality built in.

The Google TV box’s connections include an HDMI throughput so that it can best deliver the more or less seamless TV/internet mix that’s arguably Google TV’s ‘killer app’. Plus there’s a digital audio output, a LAN port, front and rear USB sockets and, of course, built-in Wi-Fi.

The remote might look a bit cumbersome, meanwhile, but its size is put to good use. Especially brilliant is the keyboard on the rear, which is tactile, spacious enough to allow our bear-like fingers to avoid pressing the wrong button, and overall just a vastly superior way of inputting text into internet search or browser fields than using some horrible onscreen, cursor-based letter select mechanism. 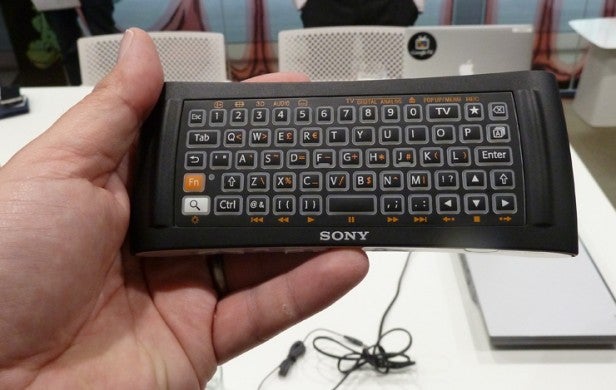 The touchpad on the other side seemed well calibrated during our hands on too, offering enough roughness in its finish to stop your finger sliding around too much. We were initially a little concerned based on experience with other touchpad remotes recently to find that you have to press the pad in to select a highlighted option. But in the limited playing time available to us, the Sony system felt much less finicky than similar touchpad remotes we’ve seen from other brands.

Turning finally to the all-important onscreen interface that combines Google TV’s online features with your TV’s normal day job, the scepticism we felt in February over its potential inscrutability to all but the most Android-savvy of smart device users has diminished. Not completely subsided, but certainly reduced. 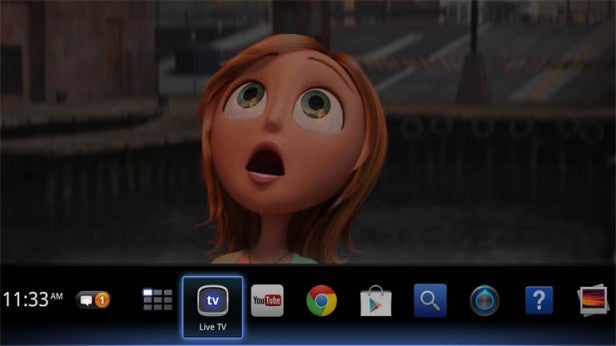 Some of this is down to refinements in the speed and organisation of the system’s main menus. The “quick” menu that you can call up along the bottom of your TV picture that provides access to a selectable handful of your favourite apps is effective (though it might have been nice to be able to add an extra row of icons), while the more in-depth, full-screen menus are spaciously and attractively presented.

Best of all, though, are the TV-optimised versions of video-friendly web services like Google , The Guardian and, especially, YouTube. Many of these really are much easier to use than their web counterparts, providing logical, remote control-friendly navigation and, best of all, some brilliant visual shortcuts to extra content. 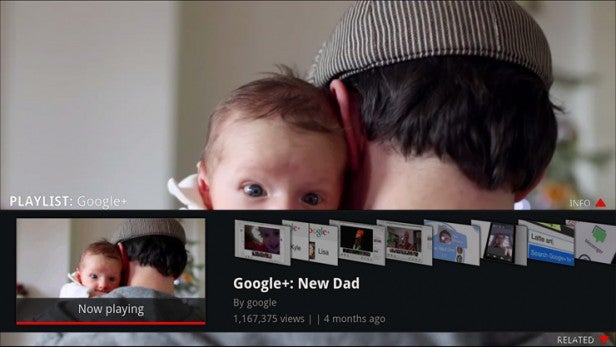 It’s this aspect of the Google TV platform that’s changed the most since our February look at Sony’s Google boxes, with more key sites introducing TV-friendly versions of themselves on a near-daily basis. And for us, it’s here that the real appeal of Google TV lies, as it potentially breaks down the wall between normal TV sources and Internet sources to the point where consumers treat them more or less equally.

We’ll bring you a full review of the Sony NSZ-GS7 Internet Player as soon as we can get into our painfully untrendy test room. In the meantime we’re off to find some polkadot speedos.