Since the concept was introduced a year ago, Ultra mobile PCs (UMPCs) have been gradually grabbing more and more headlines. Thanks to the UMPC initiative – championed by Microsoft, Intel and Samsung among others – the idea that a fully functioning laptop can fit in your pocket (or at least in an oversized belt pouch) has been slowly gaining currency. 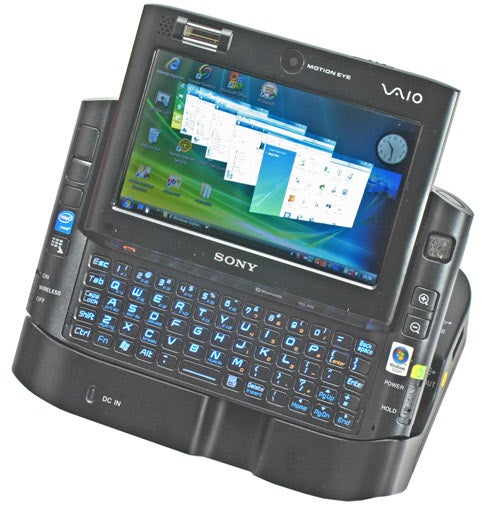 But aside from the obvious shiny, shiny allure of such tiny PCs, we’ve yet to see one arrive at the TrustedReviews offices that we would be happy to replace our trusty laptops with. We loved OQO’s Model 01+ for its sumptuous design, but it was flawed. It ran too hot, the keyboard was fiddly, and the touch screen too inaccurate to be usable. More recently, Samsung launched its Q1 SSD – a great little device, but it was expensive and not really that ‘ultra mobile’ once you took into consideration its add-on keyboard.


Sony is the latest manufacturer hoping to win us over to the UMPC of doing things with its UX1XN. Of course this is not the first time that Sony has tackled the ultra mobile market place. The UX series has been around in Japan for some time now in the shape of the UX50 and UX90. But this is the first UMPC from Sony – or any other manufacturer for that matter – that we’ve seen running Vista (Business Edition), and it’s the first time Sony has marketed the UX series in the UK. 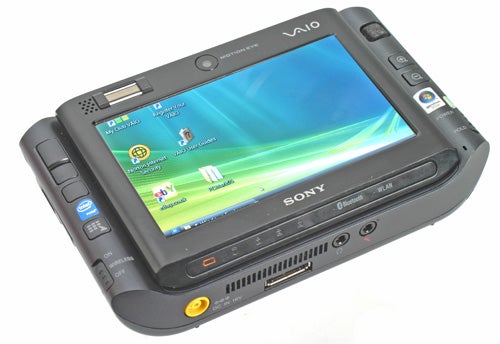 The UX1XN certainly has all the UMPC credentials. It’s very compact – at just 150 x 95 x 35mm it’s smaller than a medium-sized paperback – and it’s very light too at a featherweight 486g. Most impressive, however, is how much has been squeezed into such a petite package.


Driving things forward on the performance front is one of Intel’s ultra low voltage Core Solo processors – a 1.33GHz U1500 – and this is backed up by 1GB of memory. That’s enough to meet Vista’s demanding requirements and provides enough power to run the Aero glass effects, and the Flip 3D windows switcher. 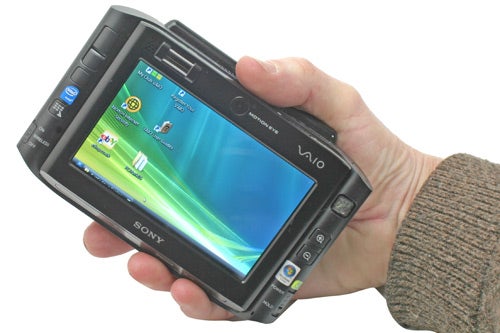 It’s also equipped with a USB port, a Memory Stick Pro/Duo slot, wireless networking, a Bluetooth adapter, a fingerprint reader, plus two cameras – three megapixels at the rear for taking stills and 0.3 megapixels at the front for webcam use. You get a clear and sharp 4.5in 1,024 x 600 touchscreen, which slides up to reveal a QWERTY keyboard. On the right hand ‘grip’ there’s a stick pointer for mousing and a couple of buttons for zooming in and out of the screen, while left and right ‘mouse’ buttons are to be found on the left hand grip, along with a button for launching a number of finger-sized touchscreen shortcut buttons.

The cradle that comes in the box adds a four-pin iLink connection (FireWire to you and me), a 3.5mm AV output socket, an Ethernet socket, three more USB ports and a D-SUB output for hooking the thing up to your monitor – so you can use it as a mobile desktop machine if you want to. It’s a line-up that most laptops would be proud to boast. 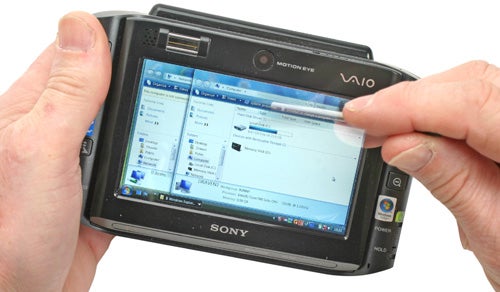 But perhaps the most interesting thing about the UX1XN is the fact that, instead of using a hard disk for storing applications and files, it employs a 32GB solid state disk. In fact it uses the same ’drive’ as the Samsung Q1 SSD Riyad reviewed back in September 2006. And as Riyad pointed out there are significant benefits to this.


First it means that the device is much more robust than a mechanical drive – there are no moving parts, so if you do have the misfortune to drop it you’re less likely to lose your data.

Second, it draws less power, so you should get more life out of it on a single charge, and on this front it certainly seems to make a difference. Using the UX1XN as a basic word processor, connected to a wireless network and with Bluetooth switched off, I managed to extract over three and a half hours out of it. This compares quite well with most laptops and should increase if you turn the wireless adapter off. Likewise watching movies and exercising the processor more will reduce the battery life.


The low power draw also means less heat output, which is an important consideration in a handheld device like this. Unlike the OQO Model 01+, which was uncomfortable to hold after a while, the UX1XN never gets as far as the hot potato stage.

Finally, from what we’ve seen of solid state drives recently, there’s a significant performance boost over many standard laptop disks. I wasn’t able to replicate Riyad’s PCMark HDD results, but a score of 4009 is still more than respectable. Compare it to the recently reviewed Samsung R20 – a full sized laptop with a standard laptop hard drive – and you’ll see what I mean. The R20 achieved an HDD score of just 3874.

Another innovation, but one that’s less obvious, is the screen, which is backlit using LEDs instead of the standard cold cathode fluorescent lamp. This makes for a very evenly lit, bright screen and should also help battery life. IT managers will also be pleased to discover that the device also sports a TPM chip for secure storage of passwords, network keys and encryption keys. 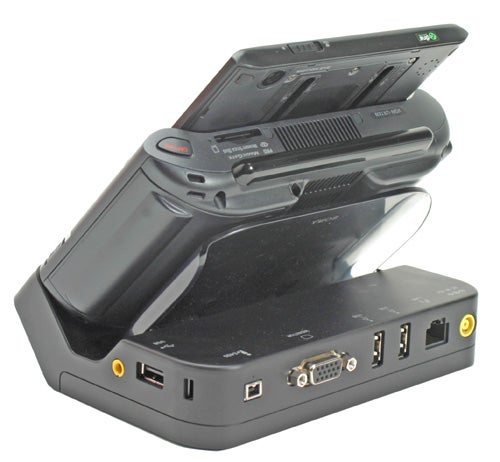 It’s all very impressive stuff but the big question is, as with all UMPCs, does it make it a practical alternative to a laptop? With the UX1XN, Sony has got a lot right. The two chunky ‘grips’ on each side means it sits very nicely in your hands – a bit like a well-designed games console controller – and the main controls are placed such that you don’t have to tie your fingers in knots to access them.


Performance is perfectly acceptable. With 1GB of RAM and that super-quick 32GB solid state drive, the UX1XN is every bit as nippy and responsive you’d expect a competent laptop to be. It’s certainly a lot more responsive than the OQO was with XP and, hooked up to a desktop keyboard, mouse and monitor, it’ll pass muster as a desktop machine with room to spare (as long as you don’t expect to be able to play games on it). 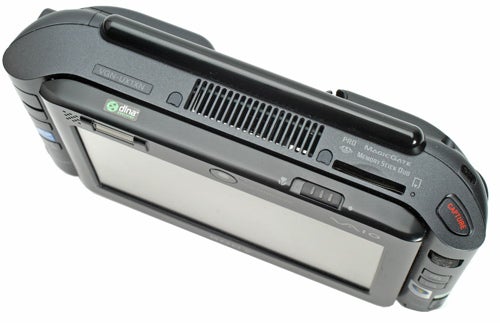 The touchscreen is very accurate – much more so than the screen on the OQO and this makes entering text using Vista’s impressive handwriting recognition straightforward and practical, using the stylus which tucks into a slot on the rear. In fact I found myself using this method more often than not for text entry. While it’s not practical for writing your magnum opus on the move, it certainly is good enough for penning the odd email, jotting notes down and filling in online forms.


The main weakness with the Sony lies in the size of the screen – its resolution to be precise. At just 1024 x 600 you find that, all too often, dialog boxes are simply too large to fit on screen – with the result that OK and Next buttons often disappear and can’t be clicked – and that things get overcrowded very quickly, especially if you opt to use Vista’s handwriting recognition panel. It’s frustrating as just 168 extra vertical lines would result in a much more usable system. 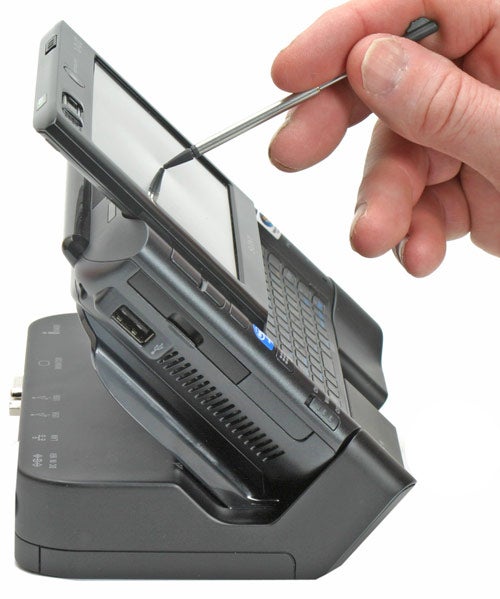 The disk too, though an impressive showcase for solid state technology, is too small for a Windows Vista machine. After taking into account Sony’s recovery partition, you’re left with just 24GB. Take Vista‘s installation footprint from this (15GB minimum) and you’re left with a measly 9GB for your files, music and video.

And then there’s the keyboard. I’d like to be kind and explain that, with time, it’s something you’ll get used to, but honestly I can’t because it’s truly abysmal. It’s not that the keys are over-cramped or too small – they’re bound to be a little fiddly on a device this small – but because they’re mounted flush with the case and there’s very little feedback to the keys it’s virtually impossible to thumb-type at a rate that’s better than excruciatingly slow. Even the OQO’s keyboard was more usable than this and I’ve used smaller keyboards on other devices that are much easier on the nerves. 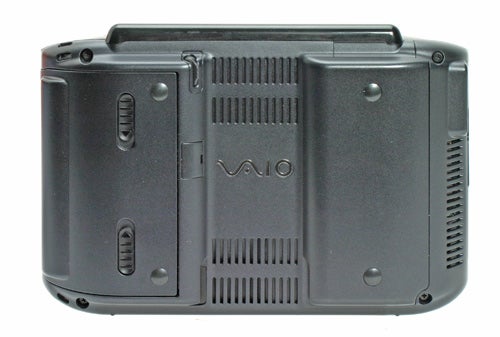 The final sticking point with the UX1XN is its price. If you just can’t keep that drooling tongue in your mouth and you absolutely must have one of these tiny PCs, you’re going to have to take out a small mortgage to satisfy your tech-lust. Sony has set the price at an incredible £1,999 inc VAT, which is £600 more expensive than the Samsung Q1 SSD and double the cost of a OQO Model 01+, neither of which are exactly cheap.


The UX1XN is certainly a highly desirable thing. Getting Vista to run in an acceptable fashion on a device this small is a feat in itself, but its impressive, notebook-like specification and decent battery life, coupled with very compact dimensions and light weight make it a much less intrusive companion than most full-blown laptops.


It can also comfortably be used as a desktop machine hooked up to a keyboard mouse and monitor via the cradle. But it isn’t perfect: further thought needs to go into the resolution of the screen and how to manage those tall dialog boxes, the keyboard needs a complete redesign before it becomes anywhere near usable and the solid state disk is just a bit too small.


At such a high price the UX1XN isn’t intended to appeal to appeal to the mass market. But even as an executive toy and a technological showcase for solid state disk technology I can’t help but be a touch disappointed. 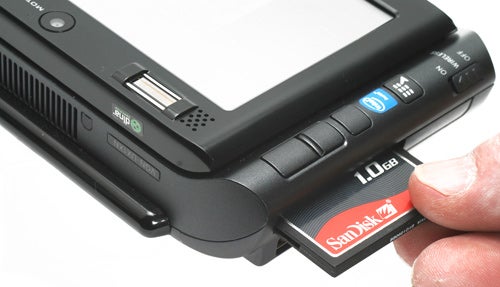