Although Sony is one of the biggest names in consumer electronics, it hasn’t managed to establish itself as a top name in the high-end headphones market – not compared to the Shures, Westones and Ultimate Ears of this world. The Sony MDR-EX510LP are here to redress that balance, without pushing the boat out too far. They cost around £50, placing then squarely in the lower mid-range of the often baffling-expensive earphone market.

Looking a little like a Cronenbergian cochleal implant when out of your ear, the Sony MDR-EX510LP aren’t beauties. However, they look less odd when jammed into your ear, only exposing the metallic minstrel (the chocolate kind) that makes up the main bulk of each bud’s bod. It’s a rather outlandish design, whose sonic effectiveness we can’t comment on without smashing them open – sadly not part of our review remit. 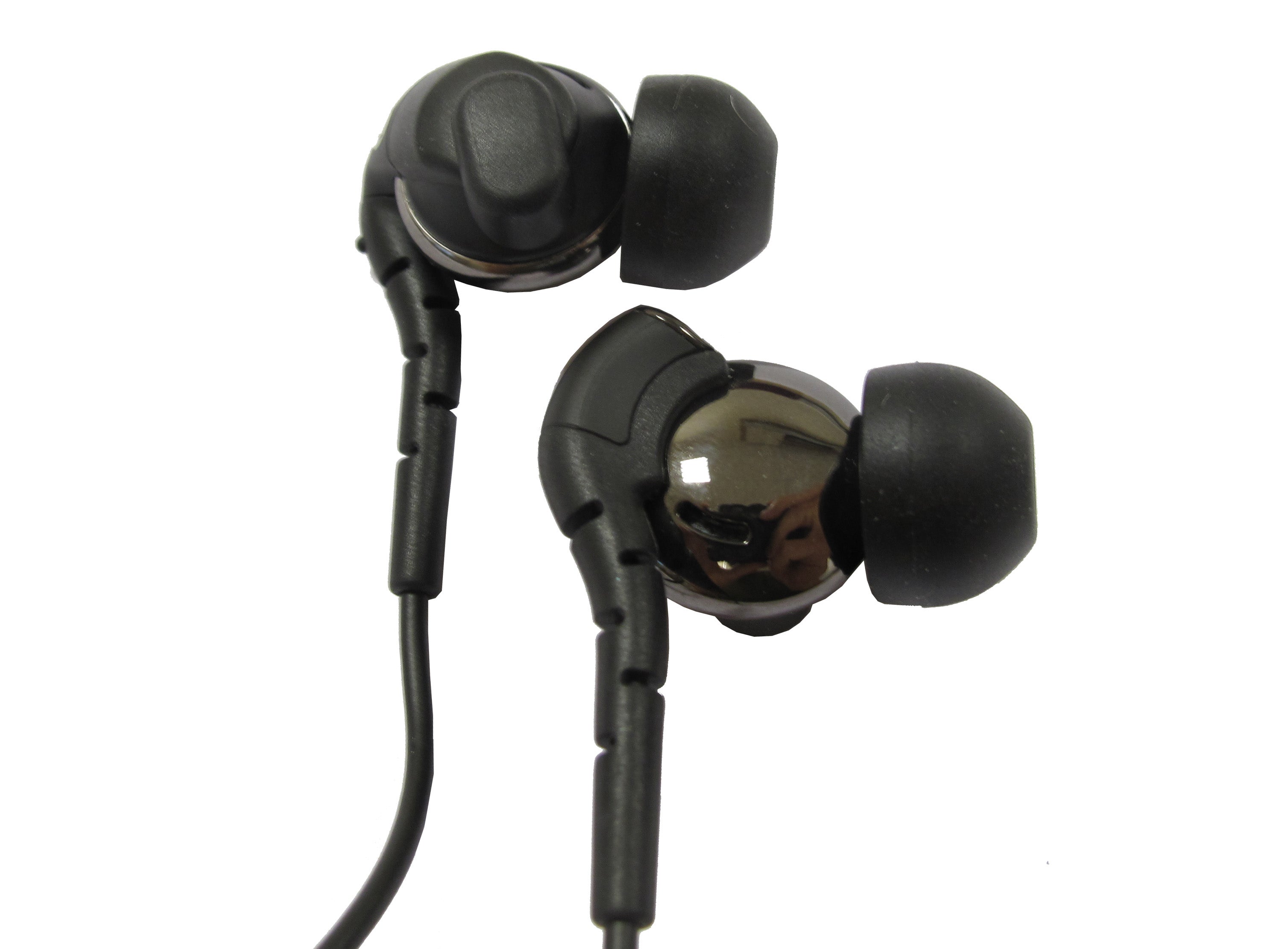 The part that rests on the back of the inside of your ear is rubberised and contoured, helping to keep them secure inside your ear. It works too, making accidental earphone evacuations less likely than a more traditional “bullet-shaped” set. There are no additional tactics to reduce microphonics though – the noise made when the cable rubs against clothing or other surfaces – so these are not perfectly suited for sports use.

Sony includes an unusually wide array of rubber tips as part of the package – seven pairs in total – each with a colour-coded inside that’ll help you keep them paired-up. This will come in especially useful if the Sony MDR-EX510LP will be joining an existing pair or two of in-ear headphones – those tips soon add up. Unusually, rubber tips lined with foam are bundled alongside plain rubber ones. The foam increases the pressure on your ear canal slightly, making it easier to attain a good seal. 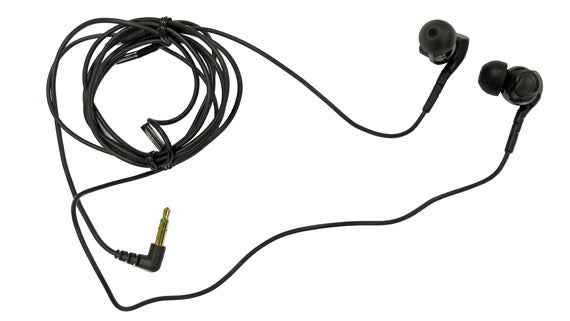 We have come across better tips at the price though, and we found Ultimate Ears’s and Phonak’s bundled tips much easier to attain a good seal with. These earphones seem to use the same size aperture as Sennheiser’s lower-end in-ear models, so if you’re picky you’ll be able to pick up some alternatives without any fuss.

The dark art of producing a headphone cable that won’t tangle-up as soon as you take your eyes off them for 30 seconds is something that no-one really seems to understand fully. Sony has tackled the issue using a rather thin, non-rubberised cable. It’s fairly low-friction, so tangles aren’t to tricky to sort out, but it also feels rather cheap – given that these earphones have risen some way beyond the £20 impulse buy upper limit. The cable tends to be the first place a pair will fail, and while we don’t expect modular cabling at this price, a sturdier-feeling cable would have been nice. It’s roughly 1.2m long from the left earpiece, but longer from the right as the cable length is not even between the two sides. 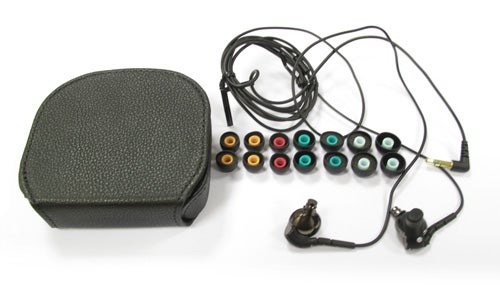 The cable ends in a similarly slimline right-angled plug. However, in our experience this right-angled type is much better equipped to deal with the trials of life connected to an MP3 player living in the washing machine-like environment of your pockets. Washing machine-like in the movement sense, rather than suds and warm water – unless your proclivities differ significantly from ours.

Sony includes a natty case to keep the ‘phones safe when not pocket-surfing too. It’s made of leather and reminds of a shoe polish holder. It may sound like a Dickensian throwback, but it’s a cut above the naff headphone cases we’re used to and will take some punishment.

Sony enters a dangerous field with the MDR-xx. Around this price is where headphones start to get really very good. Unfortunately, they don’t manage to challenge the best of their rivals.

We can’t pick out a particular sound signature Sony is attempting to create with these earphones, but that’s not necessarily a bad thing. The best earphones strive for balance and neutrality, in turn fostering excitement and musicality through the strength of their delivery. The Sony MDR-x put their feet in some of the right places, with well-mannered bass – where the low-end is still so often out-of-kilter even at this non-budget price. The Sony MDR-EX510LP’s bass is more balanced than the Ultimate Ears 400
and AKG K350, and detail is well-articulated lower down the frequency
spectrum. 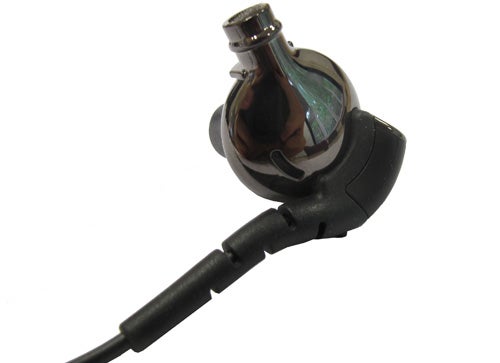 Our issue is with the Sony MDR-EX510LP’s treble.  It’s harsh and invites sibilance in a way that accomplished rivals don’t. Ultimate Ears 400 are arguably even more treble-focused but offer a much smoother high-end that also comes with none of the artificial-sounding serrated edges heard in the Sonys.

This nasty side-effect of the flawed treble doesn’t show up in all kinds of music, but is particularly prevalent during any poppy histrionics. The vocals of the flamboyant Patrick Wolf and the flouncy Friendly Fires can sound as if they’re accompanied by the wails of a screaming baby, for example. When this effect enters stage left, your ears won’t thank you for picking the MDR-EX510LPs.

We should note that note all high-flying earphones are masters of the high-end either. The Shure SE215 roll off at the top end, and the AKG K340 aren’t without a hint of artificiality.  These earphones’ brittle-sounding upper register is only highlighted by the rest of the sound though, which is lean. Other pairs can half-mask a serrated treble with expansive bass or a warm mid-range, coating potentially-sibilant instruments like violins and the human voice in a sort of sonic goo that mitigates for the figurative spiky hair cut up top. Like a mohican’d punk wearing an “I love Barbara Streisand” T-shirt. 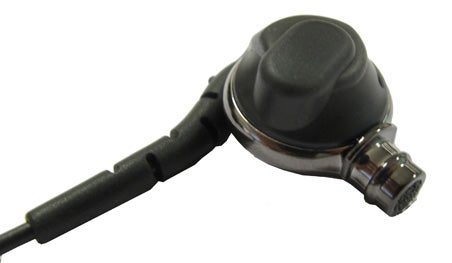 It’s a terrible shame too, because if there was a little more smoothness up top, the Sony MDR-EX510LP could compete with the best in this class. As it stands though, they’re destined to become an also-ran until one of the major online retailers does common usual trick of selling them at a ridiculous price. The over-egging of treble is often harder to forgive than overdoing the bass a bit, simply because of the different sort of strain they put upon your ears.

The Sony MDR-EX510LP come close to offering great sound for the price, with balanced, tasteful bass and a fairly wide sound. But all that promise is spoiled by treble that all-too-often harsh and sibilant.  For the same price, you can nab yourself a set with an equally-detailed sound that’s much easier on the ear.