Sony definitely seems to be savvier than most at figuring out what multimedia features are really useful on a TV. With its Bravia Internet Video service, for instance, Sony has twigged that what most people really want from an online TV service is streamed video and audio, not loads of half-baked games and infotainment widgets.

And recently Sony has also also realised relatively quickly that many modern households really want a second-room TV to be able to access their own or Internet-sourced multimedia content easily.

The 26in KDL-26EX320 delivers on both these fronts, boasting a full iteration of Sony’s Bravia Internet Video service as well as built-in Wi-Fi and full DLNA PC compatibility. What’s more, it does so for under £300, a potentially seriously attractive price when you consider that the Panasonic L24E3B we tested recently – which offered no online features at all and is 2in smaller – costs more. 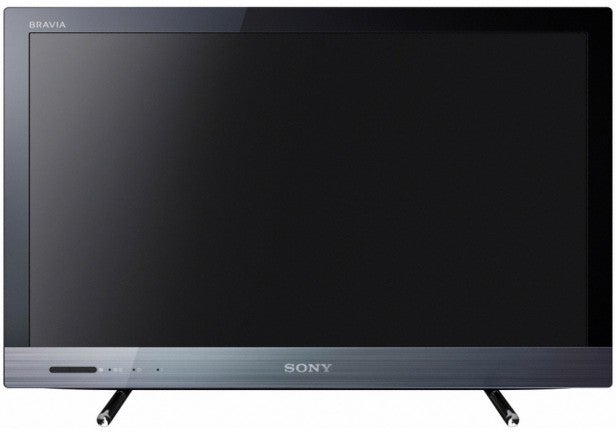 To underline its value proposition, the 26EX320 also joins the Panasonic L24E3B in using edge LED lighting to illuminate its screen rather than the ‘basic’ CCFL engine we might have expected.

However, surprise surprise, the 26EX320’s focus on multimedia has led to compromises in other areas of its specification. First and most surprisingly, the screen is only ‘HD Ready’ rather than full HD, meaning it’s got a native pixel count of 1,366×768 rather than 1,920×1,080. So most HD material you watch on it will have to be downscaled to the screen’s resolution.

The other major compromise finds the 26EX320 not sporting a Freeview HD tuner. Instead you just get a standard definition one. This is perhaps more understandable than the screen not having a full HD resolution given the context of the TV’s low price. But it might still upset a few ‘enthusiast’ punters, and it would to our minds certainly preclude the 26EX320 from being a main living room TV.

It’s worth adding that the 26EX320 only has a standard 50Hz refresh rate; there’s no 100Hz or higher engine to potentially reduce motion blur and judder. 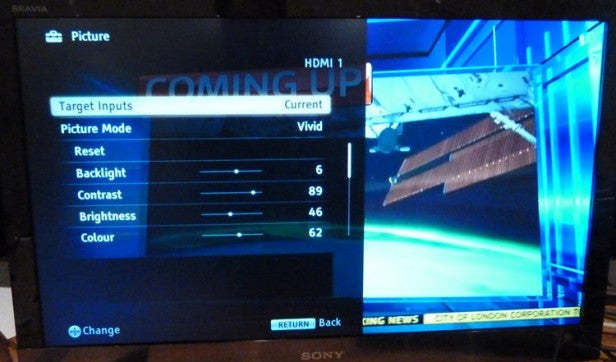 This is not to say that the TV is a total video processing wash out, though. For it benefits from Sony’s new X-Reality system, which adds enhanced noise reduction and colour processing benefits over and above the previous Bravia Engine system. Please note, though, that the 26EX320 gets the standard X-Reality system, not the X-Reality Pro system with its advanced processing for ‘souping up’ video streamed from the Internet.

Delving still deeper into the 26EX320’s feature list, the TV can play back video, photo and music files from a USB storage device via its single USB slot (so you’re not ‘restricted’ to streaming files from a DLNA PC or the Internet). You can also record from the built-in tuner to a connected USB HDD – though with this in mind, it’s a pity that the set only has one USB rather than two.

Other key connections on the 26EX320 aside from the Wi-fi/LAN and single USB already noted comprise a pair of HDMIs, a D-Sub PC input, and an optical digital audio output.

Another nice touch of the 26EX320 is its presence sensor. As its name suggests, this uses a sensor in the TV to ‘see’ if anyone is in the room, so that it can turn off the screen to save energy (and thus money) if nobody’s around.

The last feature of the 26EX320 that warrants more attention is its Bravia Internet Video service. We’ve repeatedly said this year that for us BIV’s focus on video streaming services rather than just throwing hundreds of second-rate apps at you and hoping a few of them stick really works in its favour – especially when the sort of video services on offer include LoveFilm, Sony’s Qriocity library of films and songs, the BBC iPlayer, the Demand 5 catch up service, YouTube, Sky News, and EuroSport. We still don’t get why the PS3 can have 4OD while Sony’s TVs can’t, but hopefully this odd situation will get sorted one day soon. 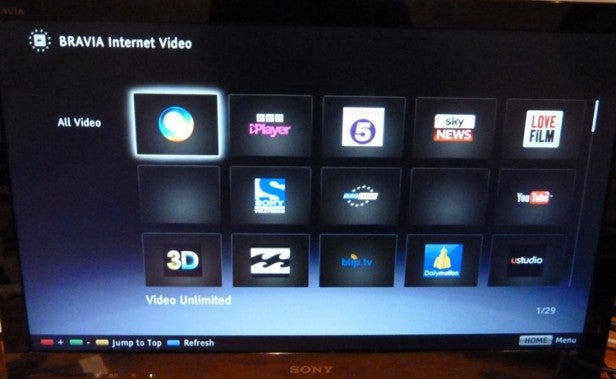 It will also be nice if Sony can deliver a new interface for its 2012 BIV iteration, as the one used now is starting to feel clunky and long winded. And finally, while the 26EX320 carries a built-in Web browser, it’s more or less unusable in its current form thanks to its text just being too small to be legible.

The first thing that strikes us about the 26EX320’s performance is that it really isn’t very bright – especially by the usual standards of edge LED technology. Even using the provided Vivid picture preset – not something we’d actually normally recommend – the picture lacks ‘pop’, despite our test room having pretty low natural light levels.

This obviously dents the TV’s potential as an option for a bright room like a kitchen or conservatory – though it’s not necessarily a deal breaker if you’re looking for something for a bedroom or study.

Having started in a negative vein, we might as well get a couple of other – much more minor – niggles off our chest. The first of these finds very slight shimmering noise over areas of fine detail like people’s hair and finely checked suits – especially during HD viewing. 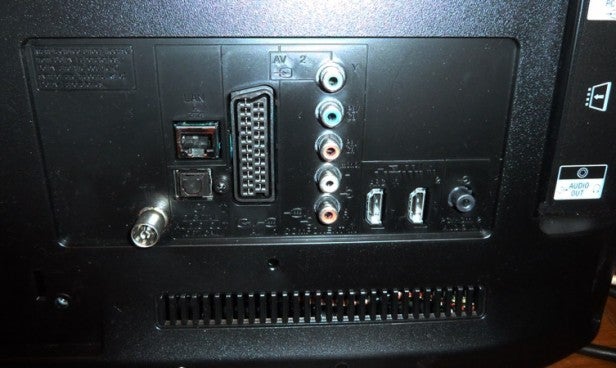 Another issue is that pictures suffer a little with motion blur. This is especially true with standard definition feeds, but it’s visible with HD too – especially HD broadcasts from our Sky HD receiver. To be fair, though, the extent of this resolution loss when showing motion isn’t really bad by small TV standards, and is only to be expected from a cheap 50Hz TV.

Finally in the negative column, the screen’s viewing angle is quite limited, with contrast dropping off markedly when you get past around a 30-degree viewing angle.

Turning now to the 26EX320’s strengths, the most obvious one is the accuracy of its colour response. Tones across the spectrum look impressively natural and also very well balanced – a result, we suspect, of Sony’s Live Colour and X-Reality processing systems. Also, colour blends are superbly done, with no sign of the striping or blotching that you can see if a TV doesn’t have the ability to render a really wide range of tones. We’d been worried that the lack of pixels versus a full HD screen might cause a few problems in this regard, but not so.

We’d also been worried that the 26EX320’s non-full HD resolution might compromise the sharpness of its pictures. But while there’s a fraction less texture in really detailed HD images than you get with a high quality full HD screen, it’s only a fairly minor difference – maybe one you won’t even notice at all from much of a viewing distance.

The lower resolution of the 26EX320’s screen also perhaps delivers a benefit. For the set upscales standard definition material exceptionally well for a TV of its size and affordability, possibly because the upscaling process isn’t having to ‘stretch’ as far as it would with a 1,920×1,080 screen. Doubtless the latest scaling algorithms of the new X-Reality system play a part here too. 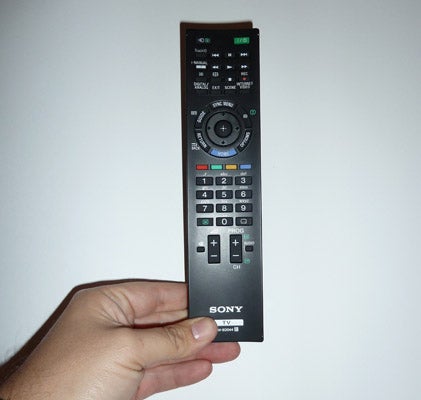 The image looks stable for a 50Hz affair too, and finally it’s above par when it comes to contrast – at least to the extent that dark parts of the picture look at least somewhat black, with less greying over than might have been expected. It’s also great to report that there’s seemingly no backlight inconsistency at all during dark scenes

It’s a pity, perhaps, that to get the best black levels you need to reduce the backlight output to its six or maybe even five setting, reducing the image’s brightness even further and causing a little shadow detail to get ‘lost in translation’. But then we’ve already pointed out that the 26EX320’s inherent lack of brightness means it’s not a great option for a bright viewing environment.

Small, slim TVs find it notoriously difficult to sound half decent due to the simple lack of space available for speakers. And while the 26EX320 is certainly far from the worst sounding small TV we’ve tested it’s certainly no better than average, tending to over-emphasise trebles, make male voices sound a bit ‘thick’, and sound one-dimensional due to a lack of bass. 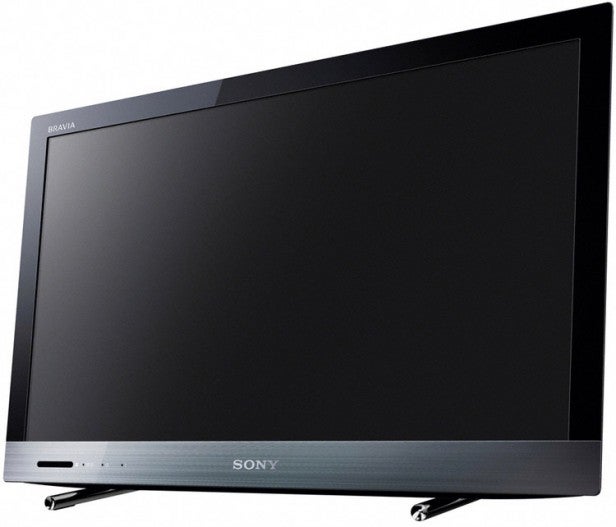 Any 26in screen has the potential to be a gaming monitor, of course. But the 26EX320 doesn’t particularly excel in this regard, as it delivers a slightly below average input lag of around 48ms (sometimes this nudges up to 60ms, sometimes it dips below 40ms), and doesn’t deliver as much impact with bright, colourful games as some rival screens.

Verdict
If you’re after a second room screen that can unlock multimedia from your PC pretty much effortlessly as well as giving you access to a good amount of on-demand video content, then the 26EX320 is almost uniquely qualified for the job – unless you spend significantly more, any way. However, that impressive multimedia functionality comes with strings attached in the form of a non-full HD resolution, no Freeview HD tuner and rather muted pictures.