We don’t normally review camcorders as expensive as this at TrustedReviews, but the HVR-Z7E had to be an exception. At the end of 2004, Sony kick-started the HD video revolution by launching the HDR-FX1E, soon followed by its professional incarnation the HVR-Z1E. The latter soon became the de facto standard for independent videographers. If you hire a freelance cameraman, the chances are they will arrive with their own Z1E.


Since then, Sony Professional has launched the HVR-V1E, with its consumer version being the HDR-FX7E, which has been going for a song in the last few months. But this wasn’t the true heir to the Z1E, and hasn’t gained its iconic status. The HVR-Z7E, however, is yet another line in the sand from Sony. It’s not just another professional-grade HDV camcorder, but includes a number of features which indicate a new era in videomaking. 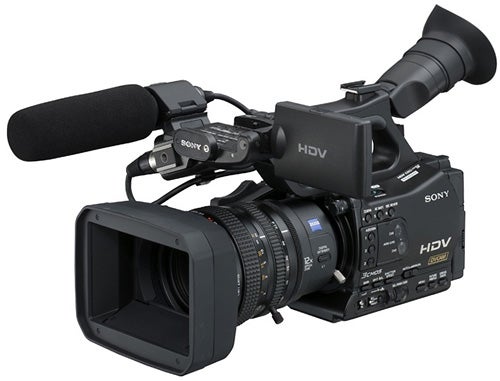 Like virtually all of Sony’s latest camcorders, the HVR-Z7E uses CMOS sensors rather than CCDs. However, where the HVR-V1E relies on a trio of 1/4in units, the Z7E incorporates three 1/3in ones instead. Each one sports 1.1-megapixels, so doesn’t quite have the native resolution for HDV at 1,440 x 1,080. But they are assisted by Sony’s new Exmor CMOS technology, rather than merely being ClearVid, so boast improved noise reduction via multiple analogue-to-digital converters.


The Z7E’s first big surprise is its removable lens. Ever since Sony revolutionised independent videomaking in the mid 1990s with the DCR-VX1000, its ‘prosumer’ models have distinguished themselves from the much more expensive full broadcast alternatives by their use of fixed optics. Not anymore. The Z7E sports a standard 1/3in bayonet fitting. Sony supplies a 12x Carl Zeiss zoom lens, but you can also get a wide angle lens and adapters to use Sony SLR lenses. So the Z7E can potentially win back the more cinematographically inclined camerapersons who have preferred Canon’s XL or JVC’s ProHD ranges for their lens flexibility.

The other big surprise is how the Z7E records its video. A standard HDV tape transport is still available. But Sony also includes the HVR-MRC1 in the box. This is a solid state recorder which works in a similar fashion to FireStore hard disk recorders, or Sony’s HVR-DR60. The unit fits neatly on the rear of the camcorder, and includes a slot for CompactFlash cards. A 16GB card, which would set you back under £90 these days, will be enough for 72 minutes of video. The Z7E will record to tape and CF simultaneously, so you can have the rapid editing of solid state, combined with the cheap archiving of tape.


These are two pretty monumental differences to the HVR-Z1E. FireStores cost £500-£1,000, and the price of CF cards is falling all the time. So the HVR-MRC1 makes the Z7E ready for rapid videomaking out of the box with only minimal further expense – and you won’t have to contend with a fat external hard disk recorder impeding the handling of the camcorder. 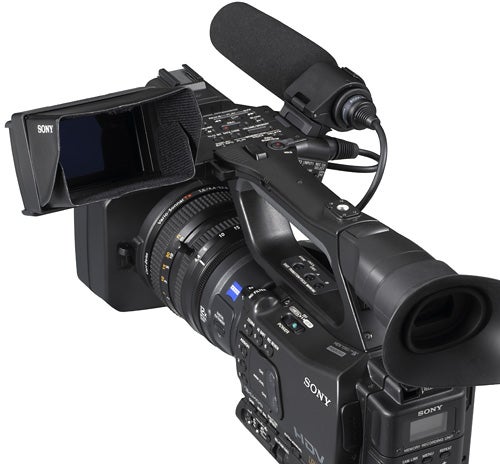 Apart from these major enhancements, the HVR-Z7E offers a relatively familiar range of manual controls. A true 25p progressive shooting mode is available. You can set the shutter anywhere between 1/3rd to 1/10,000th of a second, vary the iris from F/1.6 and add or subtract video gain from -6dB to +21dB. You can create two custom white balance presets, or use the indoor and outdoor ones supplied. A neutral density filter is also built in with four levels, from clear to 1/64. Virtually every control has its own discrete switch or button, and of course audio inputs are of the professional XLR variety. The Z7E doesn’t actually have a built-in microphone, but instead is supplied with Sony’s new ECM-XM1 monaural removable unit. This has a signal-to-noise ratio of 78dB – 14dB better than the ECM-NV1 supplied with many of Sony’s previous professional models, such as the DSR-PD170P and HVR-V1E.


With its smaller 1/4in CMOS trio, the HVR-V1E wasn’t actually an improvement over the HVR-Z1E in image quality terms. This was one of the reasons why it hasn’t replaced it – and Sony didn’t pitch it as such. But the HVR-Z7E has larger 1/3in sensors with Exmor technology, and it shows. In the best lighting conditions, colours are rich and extremely faithful, with plenty of fine detail. You still get Sony’s characteristic vibrancy, where Canon’s camcorders take a more naturalistic approach. This is a matter of taste, though, and can be altered when editing.

The biggest revelation is the low light performance. Canon’s XH-A1 was the champ for the last year in the worst illumination, but Sony’s HVR-Z7E actually outperforms it slightly. The image is a little brighter, and maintains detail in darker areas. Best of all the amount of noise is less, which must be the Exmor processing technology working its magic. It doesn’t wipe the floor with the Canon, and you need to make a side-by-side comparison to really see the difference. But as this was a weak area for CMOS technology in the past, the HVR-Z7E signals its coming of age at last.

The Z7E offers two ways of editing your footage. If you recorded to tape, you can hook up via FireWire and capture using the traditional methods. But if you also recorded onto CompactFlash, the whole process will be much faster. You can simply slot the card into a reader – or attach the HVR-MRC1 to its docking station and use that. Then the footage can simply be dragged across to a local hard disk much more quickly than real-time capturing would have taken. HDV is recorded as M2T, compatible with most professional editing apps, and DV/DVCAM as AVI or Raw-DV. We had no trouble editing footage in Adobe Premiere Pro CS3.


The lofty price of the HVR-Z7E will put it out of the reach of all but the most serious videomakers. Corporate and events cameramen will long for it, but may struggle to justify the expense. Nevertheless, it points the way forward for professional camcorders, particularly now Panasonic has announced that more models using AVCHD and SD will be arriving later in 2008. Sony’s embracing of solid state recording is a sign of how tape’s days as a primary recording medium are numbered, even if it’s still the most cost effective choice for long-term archiving. With its removable lens system and choice of recording systems, the HVR-Z7E is a great camcorder for electronic news gathering and independent filmmaking alike.