All-in-one Blu-ray cinema systems provide the most convenient and cost-effective way of upgrading to hi-def, removing the hassle and expense that comes with buying separate AV receivers and speakers. But surprisingly there aren’t that many of them doing the rounds – Panasonic and Samsung have launched all-in-one systems and several are due out later this year, but so far the choice has been limited.

Sony offers a selection of one-box Blu-ray systems but not in the truest sense of the word. Instead of using a combined Blu-ray/receiver unit, Sony’s approach is to pair together its existing Blu-ray players and home cinema amp/speaker systems. One such pairing is the HTP-B350IS, which combines the BDP-S350 deck and HT-IS100 amp/speaker system, both available separately but are slightly cheaper when bought as a package.


The system is immensely stylish, but by far the most appealing feature are the five tiny satellite speakers, each one no bigger than a golf ball, which are the updated version of the speakers supplied with the superb DAV-IS10 system. Their diminutive size makes them easy to integrate into your surroundings (you can even wall-mount them) but they’re designed to sound like much bigger speakers and can comfortably handle the 50W they receive from the amplifier. 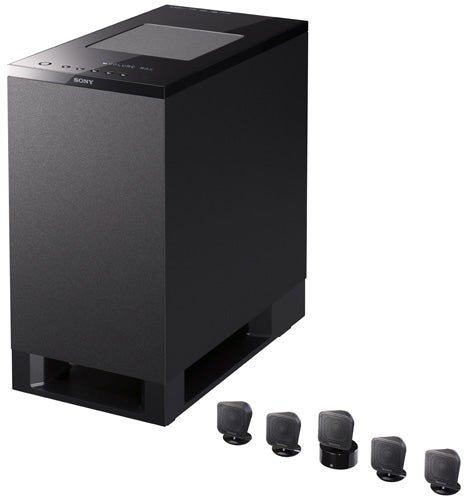 The hub of the HT-IS100 is the SA-WIS100 subwoofer unit, which provides the system’s 450W of amplification, audio decoding and connections. It’s robustly built and styled in a classy black finish, with a see-through top section that houses a few buttons and a limited LED display. It looks great, but this upward-facing info display will be hard to spot when the sub’s tucked in the corner of the room. If you do want to hide it away, then the centre speaker has an integrated IR receiver that passes remote control commands to the sub.


On the bottom of the sub is an impressive array of connections, which lets you use it as a switchbox for the BDP-S350 and your other kit. Crucially, there are three HDMI inputs (capable of passing through 1080/24p signals from the S350) and one output that links to your display, plus there are two component inputs and one out. For external audio sources there are three optical digital inputs and one assignable coaxial port, and analogue stereo input for good measure. These are joined by a composite video input, an IR control input, two IR outputs and FM/AM antenna inputs for the respective radio tuners. 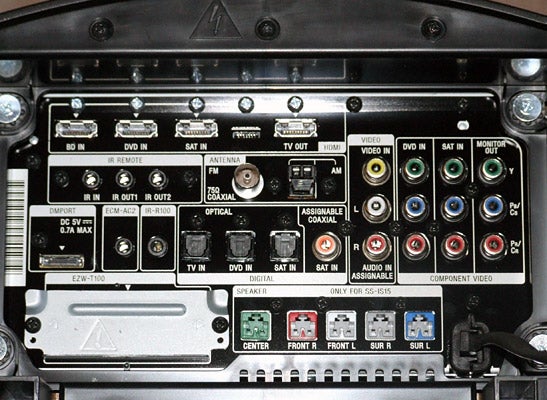 It’s also pleasing to see a set of colour-coded speaker plugs instead of springclip terminals, which is a sign of the Sony’s superiority over cheaper all-in-one systems. The Digital Media Port (or DM Port) allows you to connect an optional base and wirelessly stream music (MP3, WMA, AAC or ATRAC) to the system using any Bluetooth-enabled devices, such as laptops, MP3 players and mobile phones – and there’s a Portable Audio Enhancer feature to improve the quality of these formats.

Although there are loads of things the HT-IS100 can do, we feel compelled to point out something it can’t, namely decode Dolby TrueHD, DTS HD Master Audio or Dolby Digital Plus – which makes it seem like an odd system to pair with a Blu-ray player.


However, the BDP-S350’s built-in HD audio decoding means you can feed Dolby TrueHD or Dolby Digital Plus as linear PCM to the sub’s HDMI input and enjoy hi-res sound quality (although the deck won’t decode DTS HD Master Audio). This would be fine, except that it’s not exactly clear how to make the BDP-S350 output in multichannel LPCM – the only HDMI audio options in the player’s setup menu are ‘Auto’ and ‘2ch PCM’. We’re sure it’s possible, but all this messing about and confusion isn’t particularly convenient and makes us wish that the sub just featured the relevant decoding. 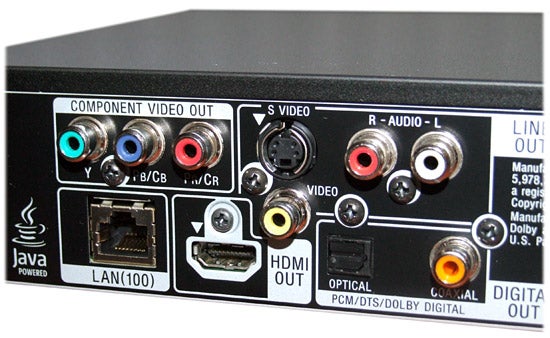 Elsewhere the HT-IS100 features component/composite-to-HDMI conversion and 1080i upscaling, the ‘Bronze’ version of Sony’s Digital Cinema Auto Calibration (which sets all the speaker channel levels, distances and frequencies using a microphone and test tones), Dolby Digital/DTS decoding, Dolby Pro Logic II processing and some ‘Sound Field’ modes that will either enhance or ruin your listening experience depending on your taste.


As for the BDP-S350, this is Sony’s current entry-level deck and offers full support for BD Live (thanks to the Ethernet port and Memory Stick slot on the rear) and other key features like 1080/24p output, MP3/JPEG playback, 1080p DVD upscaling and Dolby TrueHD/DTS HD Master Audio bitstream output (should you ever upgrade to a more capable AV receiver). 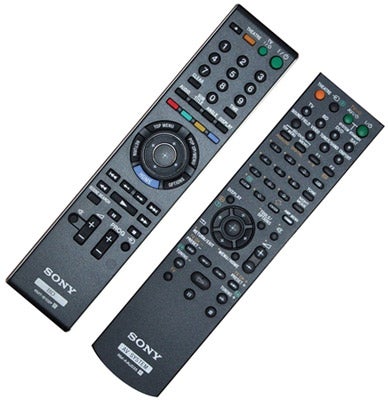 It’s also beautifully built for a budget deck and styled in a fetching shade of bluey black. Outputs include HDMI, component, S-video, composite, optical/coaxial digital audio and analogue stereo but there are no multichannel analogue outputs.


In operation the system is superb. The S350’s XrossMediaBar operating system is by far the most sophisticated we’ve encountered on a Blu-ray player, boasting big, eye-catching icons and smooth animation as you move around the menus. We also love the way the screen dissolves in and out of menus and disc playback. By contrast the sub’s operating system seems positively archaic as it’s all controlled from the basic LED display, but the presence of DCAC means you shouldn’t have to do much tweaking anyway.


You get separate remotes for the player and system, but thankfully both components can be controlled by the system’s zapper, which is a bit cluttered with labels and icons but its thoughtful button placement makes it feel intuitive.

Onto performance and the BDP-S350 is clearly a solid Blu-ray player, but some elements of its performance with the HQV Benchmark Blu-ray disc betray its budget status. It handles the Diagonal Filtering test with real expertise, with absolutely no trace of jaggies on the edges of the rotating bars, even at the most oblique angles – evidence of some skilful on-board processing. However it fails the Film Resolution Loss test with strobing boxes in the corners of the SMPTE pattern and flickering on the upper tier of the seats on the stadium shot, evidence that it’s not able to properly convert 1080/60i back to 1080/24p. 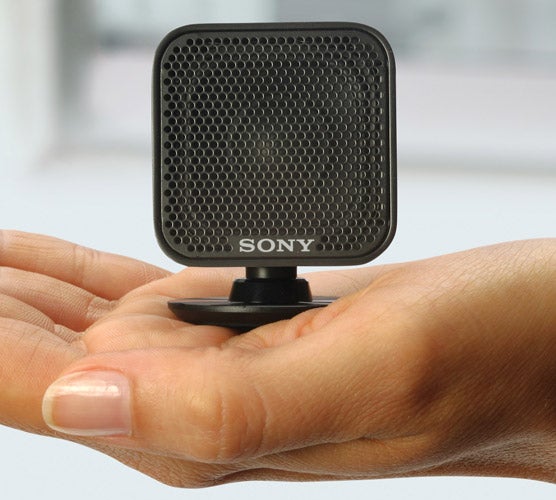 However, with straight-up 1080/24p movie material (which, to be honest, is what you’re more likely to watch on Blu-ray) it does a much better job. ”Hancock” looks stunning thanks to the deck’s immaculate reproduction of the busy LA scenery and remarkably vibrant handling of colours. Detail looks pin-sharp (just check out Will Smith’s stubble and clothing texture for proof), solid blacks give the picture a convincing amount of depth, edges are well-defined and motion tracking is fluid.


But even more impressive is the remarkably smooth and powerful sound delivered by those tiny speakers. The sound is precise, detailed and expertly controlled – during ”Hancock’s” frenetic action sequences, there isn’t a hint of brashness in the treble, mid-range sounds are full-bodied but not muddy, dialogue is natural and distinct, while the subwoofer belts out enough rich and punchy bottom end to give the soundstage real presence without getting carried away. This top-drawer performance is surprising but a real treat, and proves that bigger doesn’t always mean better when it comes to home cinema speakers. 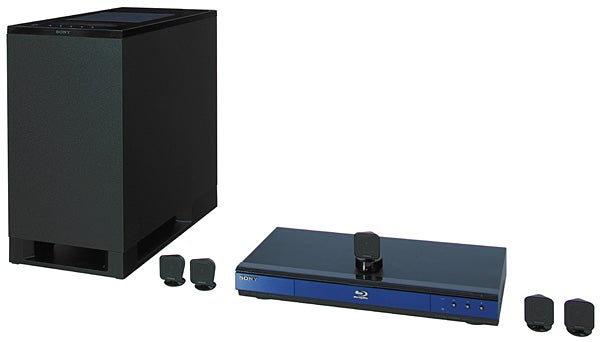 Despite its home cinema leanings, CD playback really sparkles. Letting it loose with an array of genres from house to hip-hop via jazz and rock, the HT-IS100 displays admirable versatility and skill at handling music, injecting whatever it plays with a great sense of rhythm, fluidity and detail.


The HTP-B350IS is a decent entrée into the world of Blu-ray, pairing a very impressive BD Live player with a stylish receiver/speaker system that delivers surprisingly impressive sound quality. Those tiny speakers are no mere gimmick – the sound they produce is better than many of the larger one-box speaker systems we’ve tested of late, but they only take up a fraction of the room. What’s more, the system’s generous connections, auto calibration modes and fantastic GUI make it easy to install and operate, which is exactly what you want from a one-box system.


That said, the receiver unit’s inability to decode Dolby TrueHD, DTS HD Master Audio and Dolby Digital Plus strips away some of the system’s user-friendliness and makes it feel slightly over-priced, plus the player’s lack of DTS HD Master Audio decoding doesn’t help matters either. If you want the full Blu-ray audio experience, you’re probably better off pairing the BDP-S350 with a separate Master Audio-capable AV receiver and speakers, but if you’re happy to work around the system’s limitations then it still has a lot to offer.