Setting up the HT-ST3 is a cinch. The speaker bar doesn’t require its own power supply – it connects to the sub using a single ribbon cable with four colour-coded plugs at the end. The terminals are clearly marked on the back of the sub and easy to access. Tucked away in a cabinet, it makes a neat and tidy hub for your sources.

The HT-ST3 doesn’t offer onscreen setup menus but there’s really no need for them as it’s such an easy system to operate. You might need the manual to decipher a few of the menu options on the cramped LED panel, but it’s not too taxing. 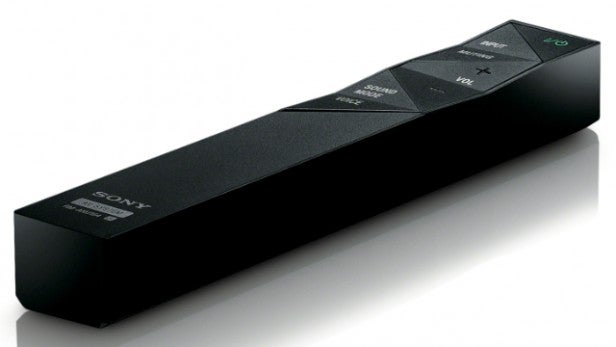 But what makes it particularly easy to use is the superb stick remote, whose sloping triangular buttons are a nod to the Sense of Quartz design. Its simplified layout makes day-to-day operation a breeze – just press ‘Input’ to toggle through sources, ‘Sound Mode’ to switch sound modes… you get the picture.

But if you want to tweak the sound further, slide open the remote’s two halves and you’ll uncover more controls, including a SW Tone button that lets you cycle through three bass settings and subwoofer volume keys.

The menu controls are also hidden here, allowing you to configure the system on the front LED panel. In the Audio section, you can correct lip sync issues or activate the Sound Optimizer, Harmonics Equalizer and Advanced Auto Volume modes.

Bluetooth setup causes no complications – a blue light on the front of the sub flashes while pairing and locks on when connected. 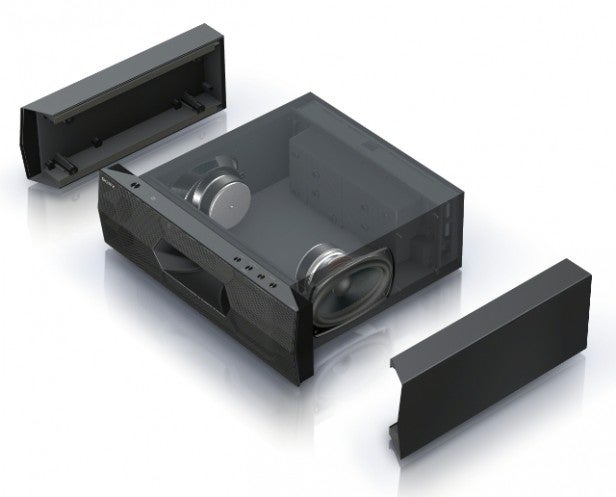 With Iron Man 3’s DTS HD Master Audio Blu-ray soundtrack fed into its HDMI port, the HT-ST3 delivers a commendable performance. Its sound is loud and engaging, yet easy on the ear and pleasingly detailed.

The audacious scene in which Tony’s Malibu home is reduced to rubble brilliantly shows off the Sony’s skills – missiles crash into the building with tightly controlled explosions, underpinned by big, visceral bass notes that blend seamlessly into the midrange.

As this scene progresses the Sony intensifies the drama with a series of confidently-delivered bangs and crashes that rip holes in Stark’s floors and send walls plummeting into the sea. The arresting score is delivered with authority, from choral voices to the brass section’s rousing Iron Man theme. 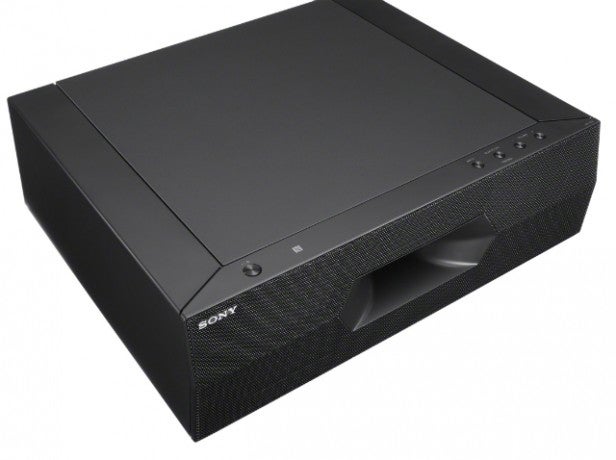 During these moments, the HT-ST3 had no trouble filling our average-sized room – in fact it’s astonishing that a soundbar this slim can deliver such a big sound. The subwoofer does a lot of the legwork but the speaker bar’s contribution shouldn’t be underestimated, firing effects into the wide soundstage with gusto.

But it’s not all sledgehammer stuff. As Tony and Maya leap through the window, the sound of tinkling glass is handled with an impressive lightness of touch, likewise the shower of fizzing high frequencies that emerges as an avalanche of rubble topples into the sea. It doesn’t quite match the insight and silky finesse of the Monitor Audio ASB-2 for example, but it’s a polished performance nonetheless.

During quiet moments, the subwoofer subtly injects atmospheric depth and solidity, while dialogue is consistently clean and audible. The Voice modes work well too, drawing extra focus to midrange frequencies, although they do compromise bass depth.

Viewing football on BT Sport with Virtual Football mode activated adds an extra feeling of size to crowd noises and an increase in bass volume, although we much prefer the directness of Standard and Movie modes.

The HT-ST3 also does a fine job with Bluetooth-streamed music. Punchy bass, crisp high frequencies and a smooth midrange all combine to make our test tunes sound terrific.

Should I buy the Sony HT-ST3?

In terms of performance, features and style, the Sony HT-ST3 is definitely worth a place on your shopping list, despite its relatively high price tag.

The only thing that might make you think twice is that it’s not a self-contained unit. It relies on a chunky wired subwoofer not only for bass output but also for connections and amplification. That might be more clutter than you’re willing to put up with, but if you have room the HT-ST3 is a hugely rewarding sound system.