No camcorder purchase decision should be made without considering what Sony has to offer. But unfortunately we haven’t seen anything new from the company since the HDR-TG3. Now the drought is over, and we have in our hands Sony’s current consumer flagship, the HDR-XR520. So if you’ve been pondering whether to buy Canon’s LEGRIA HF S10 or Panasonic’s HDC-HS300, don’t make up your mind until you see what Sony has on offer in the same class as well.


Sony has clearly thrown everything in its extensive arsenal at the HDR-XR520. For a start, the sensor is a healthy 1/2.9in CMOS. Although this isn’t quite as big as Canon is using in its LEGRIA HF S10 or JVC in its Everio GZ-X900, Sony also incorporates its Exmor R technology, which has proven highly effective in its professional models. This places the CMOS wiring behind the photo diodes, theoretically letting more light through, for better performance in poor illumination. 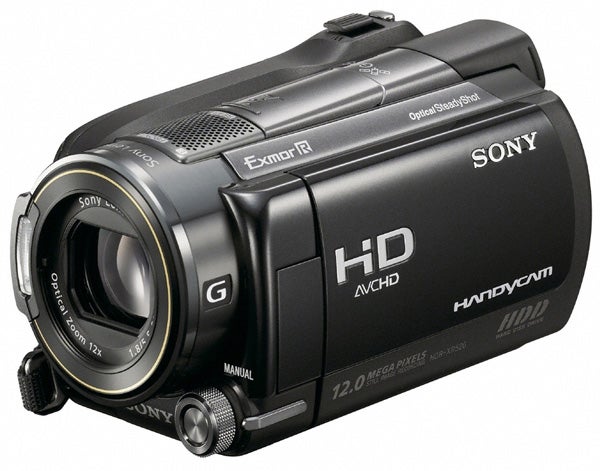 The CMOS has a gross 6.6-megapixel resolution, although only 4.15-megapixels are used in camcorder mode, or 6-megapixels in still image mode. Sony adds some interpolation to provide 12-megapixel images with a 4,000 x 3,000 resolution. However, when shooting video at the same time the maximum still image resolution is 8.3-megapixels. 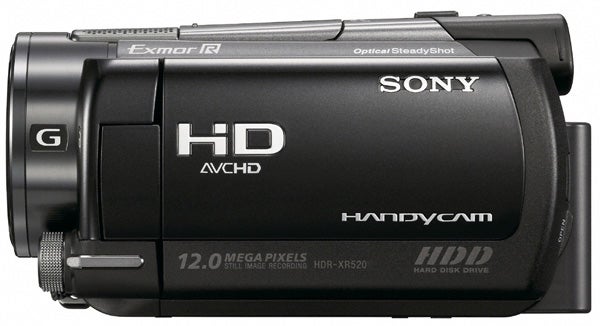 Video is recorded to an enormous 240GB hard disk in AVCHD format. Unlike Canon and JVC, Sony hasn’t switched to H.264 High Profile 4.1, instead remaining with Main Profile 4.0. This means that the top data rate is 16Mbits/sec, not 24Mbits/sec, and there is no sign of a progressive mode either. The maximum video resolution is 1,920 x 1,080 Full HD, although all the lower settings use 1,440 x 1,080. The XR520 can also shoot standard definition with MPEG-2 compression at up to 9Mbits/sec. But with the massive amount of storage, you will probably only ever want to use the top quality setting. Even in this mode, there’s space for over 30 hours of footage.

The most unusual feature, however, is the built-in GPS. Geotagging pictures is becoming increasingly popular, but the XR520 also contains reasonably detailed maps of a large proportion of the world. Europe, North America, Australia and New Zealand are mapped with major roads, although South America, South-East Asia and India have no features included. Assuming the camcorder’s GPS is getting a signal, coordinates will be stored with your footage, so you can see where the video was shot, and browse clips alongside a map showing this. Although we can see useful applications for the GPS features, it’s mostly a gimmick in its current form.

The XR520 sports a viewfinder as well a 3.2in LCD. The viewfinder pulls out and angles so you can choose the most comfortable position for your eye. The LCD is much more detailed than most camcorder displays, too, with 921,600 pixels. The port covers are robust and well designed. Sony’s premium camcorders are always solidly constructed, and feel able to withstand years of use. The rubbery door over the headphone and microphone minijacks is particularly reassuring, and unlikely to break off from frequent opening. 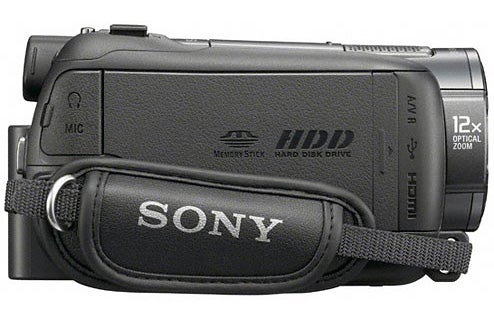 Sony hasn’t followed Panasonic’s lead with its last few top models and brought back a lens ring to aid manual focusing, but it has included the next best thing in the shape of a small knob next to the lens similar to that on Canon’s LEGRIA HF S10. Simply press the button on the end of the knob to enable manual focusing, then twiddle the knob to adjust. This method will be too slow for changing focus live during shooting, however – also known as rack focusing. 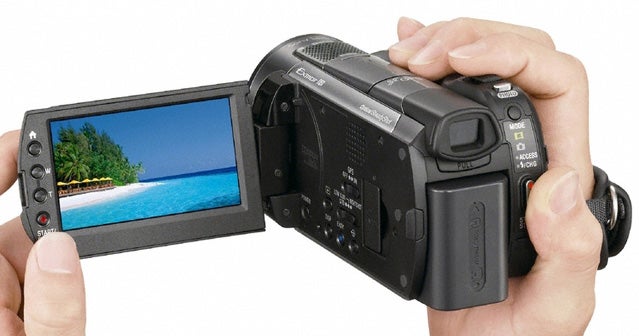 Most of the remaining settings are controlled with the touchscreen LCD. The only discrete buttons of any significance are for turning off the GPS and enabling Low Lux and Nightshot modes. But Sony’s touchscreen is used to good effect. You can touch a point on the screen to use as a reference for focus, exposure, or both put together. A tele macro mode is available, plus both autoexposure and white balance shift modes, which help compensate for biased conditions. 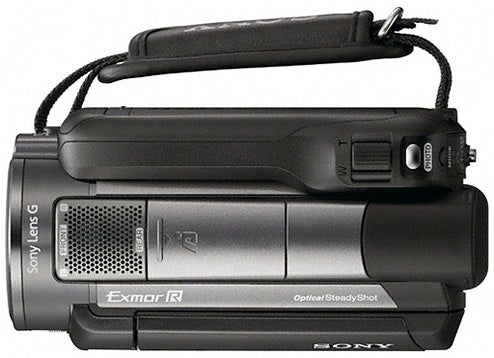 However, only manual exposure control is available, not direct access to aperture, and there is no setting available for adjusting shutter speed. So if you want a fast shutter your only option will be the Sports scene mode. Overall, the XR520 is behind both Canon’s and Panasonic’s flagship models for manual control. The accessory shoe is also Sony’s proprietary Ai version, rather than standard sized. This is hidden behind a sliding cover, which is uncharacteristically flimsy compared to the rest of the XR520’s sturdy build.


There is also a fast and reasonably effective face detection system, which ensures your human subjects are the point of reference for automatic exposure. The Optical SteadyShot now has an Active Mode, which Sony claims is ten times more steady. This will be handy for the holiday videomaker who doesn’t have space to pack a tripod.

Sony is banking on you not wanting to use manual controls because the XR520 gets things right on its own most of the time. We expect no less from a premium Sony camcorder, and this model carries on the tradition of HD image quality excellence begun with the HDR-HC1E. In good lighting, video is detailed, although colours are not quite as bright or accurate as Panasonic’s HDC-HS300 or Canon’s LEGRIA HF S10. There is virtually no sign of noise, however. 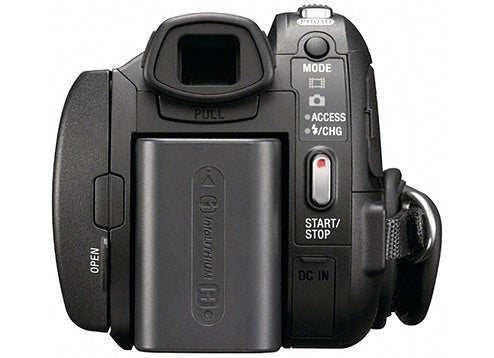 The XR520 also lives up to the hype for its image stabilisation. In fact, we would go so far to say that this is the best image stabilisation we’ve ever seen, smoothing out mild motion caused by walking with the camcorder, and doing a good job of counteracting greater levels of bounce.


Another revelation with the XR520 is how well Sony’s claims of improved low light performance pan out. The image isn’t significantly brighter than that of Canon’s LEGRIA HF S10, but it is noticeably less noisy. The white balance also remains very accurate, so colours are quite faithful. This camcorder will be hard to beat when shooting in poor illumination. 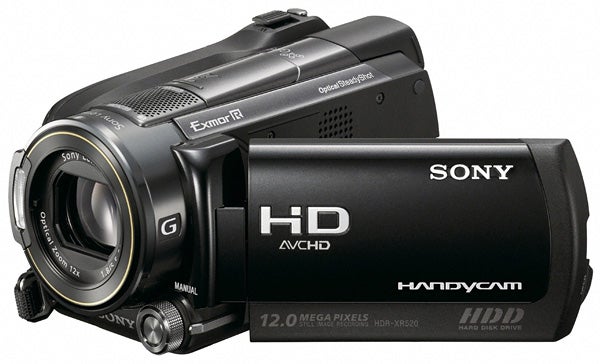 Since the XR520 records standard 1080i AVCHD, editing footage will pose no problems at all. For watching your footage on a TV, Sony has integrated a mini HDMI port (but with no adapter), and there’s a proprietary port for hooking up component and composite analogue video connections. S-video is also supported by this port, although the required cable is an optional extra.


The top models from Canon, Panasonic and Sony are all masterful products. Canon’s LEGRIA HF S10 is currently too expensive, but the Panasonic HDC-HS300 and Sony HDR-X520 are similarly priced and much harder to distinguish. The Panasonic’s full-sized accessory shoe, lens ring and greater manual control give it the edge for features, but the Sony just shades image quality in low light and includes masses more storage. If you’re a serious hobbyist or semi-pro, the Panasonic should be your first choice. But if you just want to shoot great video and not fiddle with settings too much, Sony’s HDR-XR520 is a valid contender.