We were gobsmacked by Sony’s HDR-TG3, which packed very capable 1080i HD video shooting into an unfeasibly small package. Sony claimed it was the smallest on the market at the time. Tiny 1080 shooters aren’t quite so rare these days, with even pocket Internet models such as JVC’s PICSIO GC-FM1 getting in on the act. But Sony’s HDR-TG range is still the smallest to offer true camcorder features, and the most recent revision is the TG7VE.

This model is virtually the same size as the TG3, similar in dimensions to a small electric shaver, yet it packs even more inside. As well as offering 16GB of on-board memory, where the TG3 had none, the TG7VE has on-board GPS. However, the basic specifications are the same as before. Both are built around a 1/5in ClearVid CMOS sensor with Sony’s Exmor technology. This places the sensor wiring array behind the individual pixels, so more light is allowed in for improved low light sensitivity. We have generally found this technology effective. The sensor has the same gross 2.36-megapixels, and both use Sony’s BIONZ image processor. So overall image quality should be virtually identical between the two models. 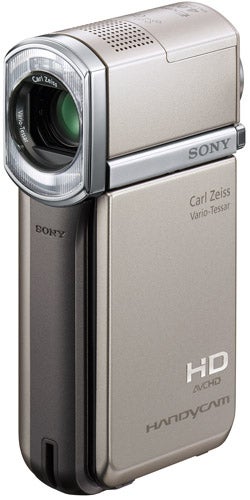 The TG7VE can shoot video at up to Full HD, with a 16Mbits/sec data rate. This allows slightly more than two hours of footage to be stored on the 16GB internal memory, and you can augment this with removable flash media. Unsurprisingly, this will be in the form of Sony’s proprietary MemoryStick PRO Duo format, which is usually slightly more expensive than SDHC. The TG7VE can also shoot still images at up to 2,304 x 1,728, which is again the same as the TG3 and involves a certain amount of interpolation. 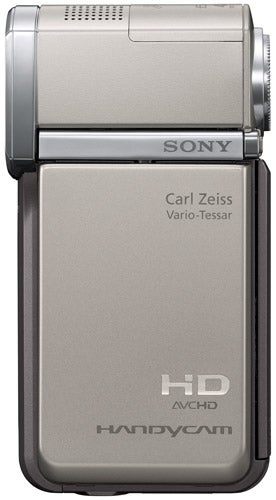 As we mentioned earlier, the TG7VE (and TG3) differentiate themselves from pocket Internet camcorders by offering far more camcorder features. The most immediately beneficial of these is the 10x true optical zoom, rather than relying on the quality-sapping digital variety. The zoom is operated via a ring on the rear of the device, which is easy to use with your thumb. A large button in the centre of this ring controls the starting and stopping of recording. A smaller separate button grabs still images, although these will be limited to 2.3-megapixels if you are already shooting video at the time, and the flash won’t be enabled.

There are no other controls to speak of on the camcorder itself. The remainder of the TG7VE’s features must be accessed via the 2.7in touchscreen LCD. The interface has been redesigned compared to previous Sony camcorders, and uses a simple scrolling list divided into categories. There are ‘fast forward’-style double-arrow onscreen buttons for skipping categories, and single-arrow buttons to scroll through the options in each category. 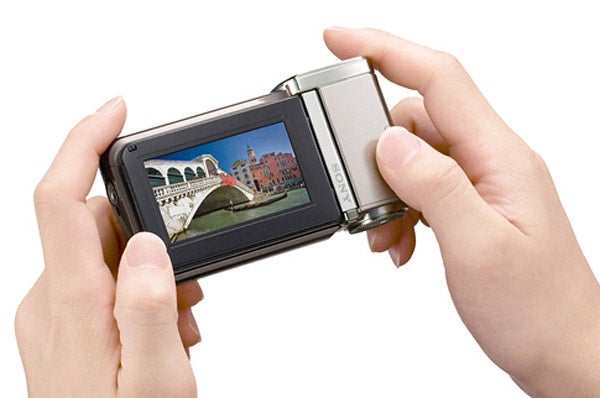 However, despite the new interface, the same healthy selection of manual controls is available. You can use the touchscreen to indicate a point within the frame to stand as a reference for focusing, exposure, or both put together. You can also configure focus and exposure using onscreen sliders, but there is no way of accessing iris or shutter settings directly.


The TG7VE offers Sony’s Smooth Slow Record, too. This buffers footage at a high frame rate and lower resolution, then records it to memory at the usual 25 frames/sec at Full HD. The result is slow-motion video that is clear and smooth, albeit not quite as high quality as the regular Full HD footage. 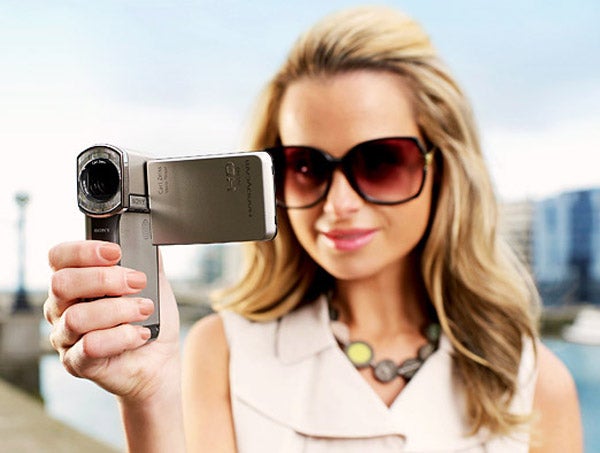 There are 10 scene modes to choose from, with most of the usual suspects in evidence such as portrait, twilight, beach and landscape, but curiously no sports option. So if you want to capture fast motion without blur then you’re out of luck.


The much-vaunted GPS system lets you tag photos and videos with their location. You can then browse them by location, or via the built-in map. However, it’s a bit of a gimmick. Although location tagging for photos is now well established, the same cannot be said for video. 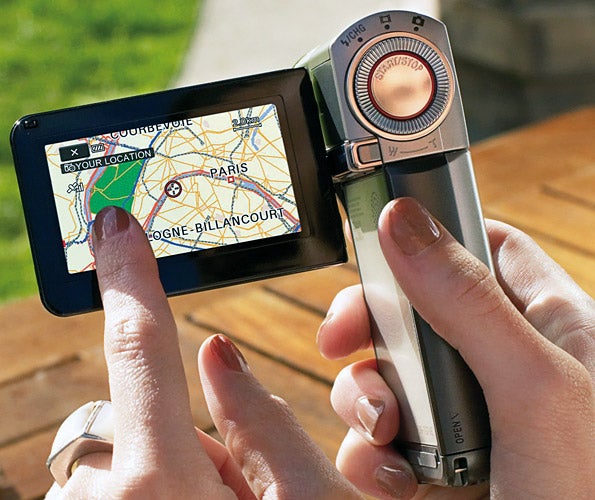 With its identical optics to the TG3, the TG7VE provides virtually the same image quality. But that’s no bad thing as the previous model punched well above its size in this area. The picture is colourful and packed with detail when the lighting is good. There is a slight lack of sharpness compared to the very best Full HD camcorders currently available, but nothing too intrusive. Image stabilisation is of the electronic variety, but Sony’s version is relatively effective, albeit not on par with the optical systems found in higher-end consumer camcorders.

Despite its smallish sensor, as with Sony’s excellent HDR-CX105E, the TG7VE records a surprisingly good picture in low light, thanks to its Exmor technology. The autofocus can be rather sluggish, and the picture is a little noisy in poor illumination, but it’s also surprisingly bright and full of colour. So you should be able to shoot watchable – or at least visible – footage in most conditions. 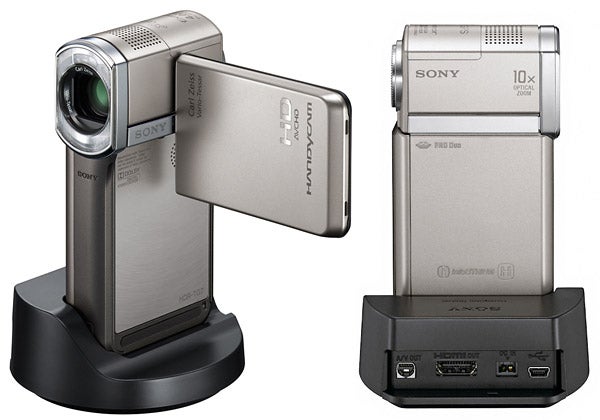 Most of the TG7VE’s connections are to be found on a separate docking station. This includes a proprietary A/V out which provides either composite or component video output, alongside RCA audio. There is also mini-USB, and even HDMI, as well as a power socket. However, the camcorder itself does have a couple of connections on board. Aside from the essential power socket – so you don’t have to carry the docking station with you on holiday – there’s another A/V output.


Now that we have 1080p-shooting pocket Internet camcorders costing under £200, the HDR-TG7VE’s £500-plus price looks a little steep. However, it is in a totally different league in terms of both image quality and features. You can also pick up similarly good camcorders for much less, in particular Sony’s own HDR-CX105E or JVC’s Everio GZ-HD300. Nevertheless, neither are as small or stylish as the TG7VE. It may be a little on the pricey side, but this is one camcorder you could stow in your breast pocket, yet it’s capable of very impressive video quality for its size.