High definition camcorders have reached a price where it’s almost not worth considering anything else. Almost, that is, but not quite. If your budget only stretches to around £200, your only HD choices will be feature-impoverished pocket Internet models such as Flip’s UltraHD. In this case, if you want more control over how your video is shot, a standard definition camcorder could still be a better option, as what you lose in pixels you will gain in configurability. The major manufacturers are still developing a small range of standard definition models, and one of Sony’s latest is the DCR-SX30E.


Since it uses flash memory for recording, the SX30E is reassuringly tiny. The camcorder comes with 4GB built in, but if you want more the only option is of course Sony’s proprietary MemoryStick format, in this case the Pro Duo variety. You will almost certainly need to avail yourself of some extra storage, too, as at the top HQ quality setting the on-board memory is only enough for 55 minutes of footage. The HQ option uses a 9Mbits/sec data rate, but there are also SP and LP modes which operate at 6Mbits/sec and 3Mbits/sec respectively. All footage is recorded at a resolution of 720 x 576 pixels and 25 frames/sec, using a standard interlaced format and MPEG-2 compression. 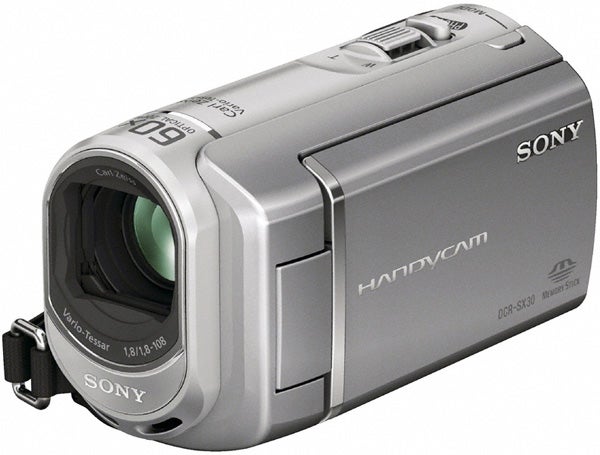 The optics feed an incredibly tiny 1/8in CCD sensor with 800,000 pixels. The sensor size doesn’t bode well for low light performance, and still image resolution is just 640 x 480 pixels, which is behind a lot of mobile phones these days. The one benefit here is that it enables a whopping 60x optical zoom, which can be boosted to 2,000x using digital means, but thankfully Sony plays this down. The lens is protected by a built-in cover, which operates using a manual slider rather than automatically when you power on the camcorder.

Not surprisingly, the DCR-SX30E has few features for the enthusiast. There is no accessory shoe – there’s hardly enough room for one anyway – nor minijacks for headphones or an external microphone. The majority of settings are configured through the touchscreen. There are discrete buttons for toggling Easy mode and backlight compensation, and that’s it. Otherwise, settings are accessed via the Home and Options menus. However, the latter is where the most detailed configurations can be found. 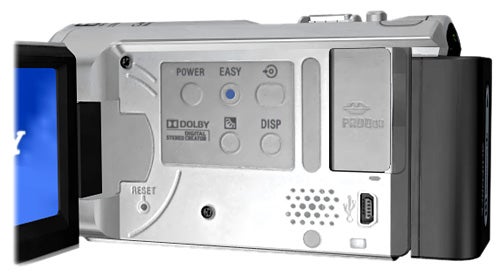 Since the control method is via touchscreen, Sony’s capable one-touch system is available. This provides either focusing or metering by simply pressing a reference point in the visible frame. Alternatively, both can be set simultaneously via the combined option. There’s also a tele macro mode, plus both focus and exposure can be set manually using touchscreen sliders. As with other Sony camcorders, there is no direct access to shutter speed. Your only option is to bias this indirectly using one of the 10 scene modes. For example, Sports will choose the highest shutter possible in the given light conditions, for sharper pictures of moving objects.

The SX30E doesn’t include Sony’s latest widgets like face detection-based exposure compensation. It does have Face Indexing, although we’ve found this of limited practical use despite the marketing claims. One surprising omission, however, is any way of triggering record via the LCD. Having a button for this on the outside edge of the display makes two-handed shooting from the hip a very comfortable alternative to the traditional HandyCam posture. Some manufacturers are even adding zoom controls here, and it would have improved the SX30E’s usability to have this option.

After the steady stream of HD camcorders we’ve been seeing here at TrustedReviews, regular TV resolution can feel like a step back. Naturally, the SX30E’s picture has far less detail than HD, but colour reproduction is equally important, and this has traditionally been a strong point for Sony. The DCR-SX30E achieves Sony’s usual saturated image in good lighting. Primary colours are vibrant and well defined, although there is a slight loss of focus at the most extreme telephoto factor. The compression also handles fast-moving detail well, without an undue level of artefacts – something cheap Internet-oriented camcorders often fail to accomplish. 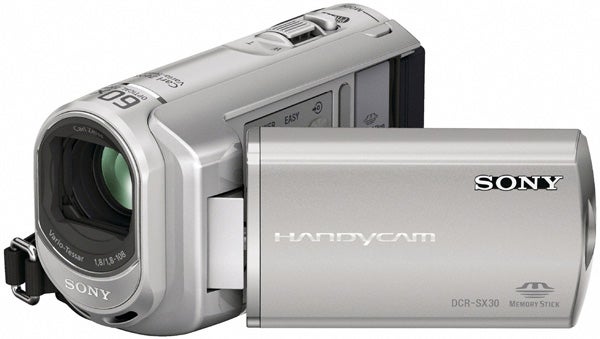 The most likely casualty of the SX30E’s small CCD is low light performance, and not surprisingly it isn’t outstanding in this area. Sadly, with many cheaper camcorders, dimly lit social gatherings are a likely shooting subject, but also one of the weakest areas of performance. The SX30E does slightly better than expected under these conditions. On the downside, colour washes out almost completely in low light, but surprisingly there is still detail visible in shadowy areas, and not too much grain. This is the complete opposite to most HD pocket Internet camcorders, such as the Flip UltraHD, which maintains colour but with a much fuzzier image.


The SX30E’s video comes as a standard MPG files, so is readily supported by most mainstream editing apps for PC or Mac. There’s a USB 2.0 port under the LCD, and the only other connection is for A/V output. Sony bundles a breakout cable sporting composite video and RCA audio, and the port is protected by a reassuringly sturdy plastic flap, something we wish more manufacturers would emulate.


Although the days of standard definition camcorders are clearly numbered, there are still a few years left to go. If your budget only extends to £200, your choice is between a cut-down HD model with inferior features and image quality, a pocket Internet HD camcorder with no features at all other than direct web upload, or a budget regular TV resolution unit such as the DCR-SX30E.

Canon’s LEGRIA FS21 and JVC’s Everio GZ-MS120 both offer better low light performance, particularly the JVC, but they are also considerably more expensive, where the SX30E is available for around £200. If you would rather have a camcorder with a little more control than a Flip, and are willing to forego HD resolution to get it, this is a relatively capable pocket model for a good price.