Maria Sharapova doesn’t have much luck with phones. She was the famous face of Motorola during the latter years of the ill-fated RAZR reign before switching allegiance to struggling Sony Ericsson during a time when it produced wave after wave of feature phones while smartphones flourished.

That said, 2011 has seen both Sharapova and Sony Ericsson find focus and form and with Sharapova fronting the campaign for the new Android-powered Xperia Active, both should have another smash on their hands.

As the name suggests the ‘Active’ is targeting the more energetic members of society and it does this in a number of clever ways. Out of the box, the most apparent of these is size. At just 92 x 55mm the Active has a surprisingly small footprint compared to today’s monstrous handsets, though a ruggedized exterior means it is a hefty 16mm thick.

This gives the Active an Xperia Mini-esque ‘small-but-chunky’ appearance, though its build quality far exceeds the Mini with a tasteful rubberised rear, toughened metal rim and wholly touch-sensitive home, back and context keys. At 110.8g there isn’t a great weight penalty to be paid either, suggesting the premise for the Active is to be pocket friendly and withstand the elements, but that is only the start.

The Xperia Active’s party trick is that it is waterproof. Sony Ericsson claims the Active can withstand being fully submerged for up to 30 minutes in depths up to one metre and surely enough it passed this test with flying colours. To achieve this, the Active’s 3.5mm headphone jack and micro USB charging port are covered by well made rubber flaps and cleverly, an onscreen prompt reminds you to close them whenever headphones or the charge cable are unplugged. It’s the little things.

In addition to this Sony Ericsson has equipped the Active with ‘wet tracking’ so the phone’s screen works even underwater and it also responds (though less responsively) through the transparent window in a bundled armband, which will be a boon to regular runners and gym goers.

It is important the screen has these useful traits because it helps to disguise one of the Xperia’s potential deal breakers: the display’s small size. With 3.7in and even 4.3in displays now commonplace, the Active’s 3in 320 x 480 pixel panel seems weedy by comparison. Don’t be too quick to judge, however, since Sony Ericsson has incorporated its excellent Reality Display with Mobile Bravia Engine screen technology which results in vivid colours, sharp text and wide viewing angles. Due to the small size, pixel density also remains good and it has a very useful knock on effect on performance. 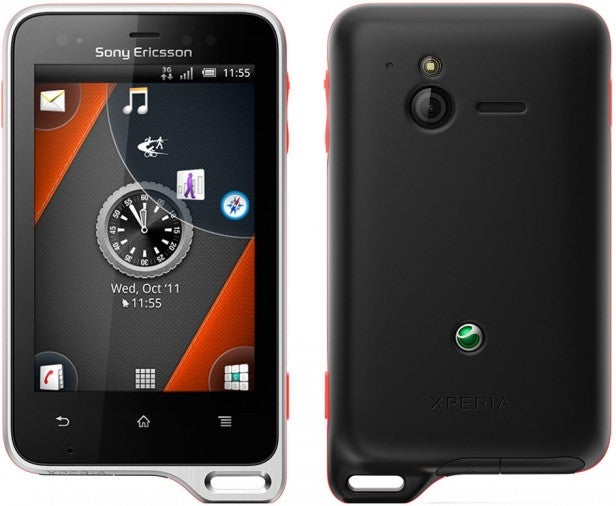 The Xperia Active is equipped with a 1GHz processor and 512MB RAM, by no means anything to write home about in 2011. Yet because it has to process less pixels than today’s high end handsets, the Active positively flies. It is certainly helped by shipping with the latest version of Android for smartphones (v2.3.4), but the reduced pixels are key.

Also key to the Active’s small screen success is Sony Ericsson’s excellent, minimalist Timescape UI (surely one of the best third party Android skins). Like the Xperia Mini, the Active places shortcuts for up to four apps in each screen corner meaning a surprising amount of functionality can be reached quickly and easily. The native inclusion of Swype also makes typing on the small keyboard a joy. A hole in the Active’s armoury is its 300MB internal memory, but that should be enough to install most apps before transferring them to a microSD card (a 2GB card is bundled, but the slot is 32GB compatible).

Spend just a few minutes with Timescape and again the Active’s healthy focus resurfaces. Preloaded applications include WalkMate, a pedometer, and iMapMyFITNESS which tracks nutrition, workouts, running routes and will even connect to compatible heart rate monitors. Yes these apps can be attained on other devices through the Android Market or the Apple App Store, but they are thoughtful additions and their ubiquity (which includes a centralised home online home) simply makes them easier to use from multiple sources.

The Active’s focused attention also sees nice little extras such as its LED notifications which can be tied into these fitness apps to visually alert you when completing set goals. Another are the bundled MH650 earphones which use their single button mic to make/end calls, stop/start music and double click to skip tracks. None of this is rocket science, but for bundled earphones they produce reasonable sound quality with decent bass to compliment this handy functionality. Meanwhile a bulge on the bottom of the Active lets you attach a bundled rubber lanyard, useful if you plan to use it in such extreme situations as in the video below.

Less impressive is the camera. Sony Ericsson has a strong reputation for its camera phones, but the five megapixel auto focus shooter on the Active is distinctly average. Results are good in perfect conditions, but the LED flash is weak, making photos look dull indoors and noticeably noisy in low light. On the plus side the Active does shoot in 720p HD video and while it isn’t always smooth (notably when panning) it is a cut above what we have come to expect from rugged devices.

What stops the Xperia Active scoring even higher, however, are two significant flaws: call quality and battery life. The former we found muffled, even in areas of good reception, and particularly prone to wind and environmental noise. The latter stems from the relatively low capacity 1,200mAh battery (quoted at 4.5 hours talk time) and Android’s notoriously power hungry requirements. Treat your phone like a phone and it will get you through the day, but use it for its primary purpose (running with the GPS tracking and some motivational music blasting) and you’ll be need to charge it midway through the day. 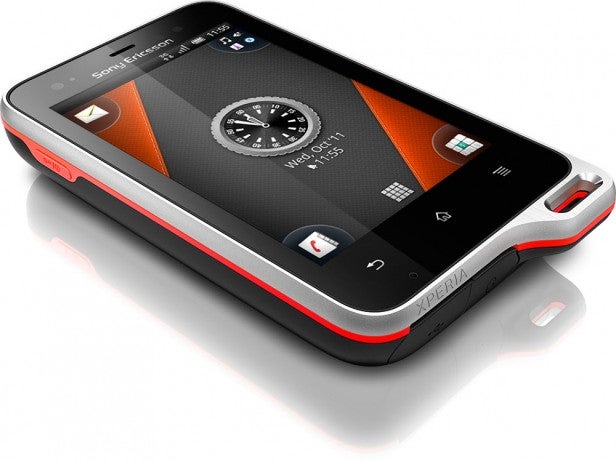 All of which could be more damaging if it wasn’t for Sony Ericsson’s keen pricing. The Xperia Active retails from just £239.99 SIM-free and for a device that’s likely to last far longer than your average smartphone, that makes it a bargain.

Verdict
After a number of years in the wilderness, Sony Ericsson (soon just Sony) is finding its feet again. The Xperia Active is a well-made, carefully thought out, specialist smartphone for those who love the outdoors. It is rugged, portable, comes with an excellent bundle including a runner’s armband and has snappy performance which belies its run-of-the-mill specifications. Pricing is also very competitive with only the sizeable caveats of call quality and battery life dragging down an otherwise excellent smartphone. The green shoots of recovery continue.