The Satio is currently top of Sony Ericsson’s range of feature phones. It packs in a 12.1 megapixel camera with a Xenon flash, a full touchscreen interface, and class leading media playback. On the surface that’s an impressive feature list, but does the Satio make the most of them?


Things don’t get off to the best start as, despite a generally inoffensive design, this phone simply doesn’t have the quality feel you’d expect of such a premium device. The screen is finished in a flexible and highly scratch prone plastic (and, yes, it is resistive rather than capacitive) while the rest of the phone, aside from the brushed-finish lens cover on the back, uses less than rock solid glossy black plastic and faux chrome. One advantage of all this plastic is a relatively lightweight device; at 128g it’s markedly lighter than its hefty dimensions of 110 x 55 x 18mm/13mm would suggest. 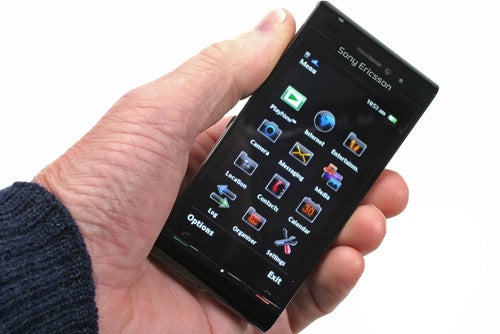 The phone is reasonably snug in the hand and the main controls fall easily into place but it is a little top heavy thanks to that big camera. The front is very minimal with just three buttons, for call answer, menu and call end, sitting below the 3.5in screen, while a video calling camera sits up top. The sides, however, are veritably festooned with features.

On the left is a slider for locking and unlocking the phone (which is something we think is completely superfluous as this could be implemented in software) and below this is the standard Sony Ericsson port for charging, USB connection, and headphone connection (yes, there’s no other headphone socket on this phone). A MicroSD slot supporting cards up to 32GB also sits under a flap and handily the phone recognises when it is inserted or not and changes the camera’s default storage appropriately.

A volume rocker that doubles as the digital zoom for the camera kicks things off on the right edge and alongside it sit buttons for toggling between the image viewer and video/stills modes in the camera. The camera app starter/shutter button, which is encircled by a glowing blue ring when in use, finishes things off. The only other control is the power button that’s on the top edge – we would prefer it to be combined with the call end button as on the vast majority of phones. The fairly measly mono speaker also ports out the top while a lanyard loop sits centrally on the bottom edge.

Sliding the camera cover aside reveals the lens, which quite obviously looks the business compared to most pinhole camera phones. Above it sits the Xenon flash while off to the left is an LED that’s used as a focus assist for taking photos and a lamp while recording video. The slide mechanism feels very solid and shouldn’t be knocked open too easily but it’s still easy to operate when needed. 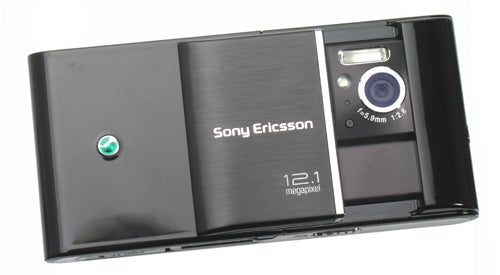 In the box you get a 40in wired headset adapter (with call answer/end button) and a short set of headphones (11in and 25in from plug to the left and right earpieces), which are of the canalphone type and come with a choice of three different silicone tip sizes. They’re noticeably better than the usual bundled affair though we’d still be inclined to swap them out for an even better pair for regular music listening. A lipstick-style stylus, USB cable, and wall charger are also included while an AV cable in particular sets this phone apart from the crowd. It’s 60in long, connects to the phone’s charger socket and terminates in three phono cables for stereo audio and composite video. It’s an interesting addition but considering 99.9 per cent of the people that buy this phone will never even take it out the box, we think it could’ve been an optional extra.


The screen packs in 360 x 640 pixels which, though not the most, is certainly sufficient for sharp images and provides enough desktop space to not make browsing the web and such like too much of a chore. Colour reproduction is particularly impressive with plenty of saturation and a bright overall image yet still impressively dark blacks. Viewing angles are also very good, which is particularly useful when taking photos. Essentially, in terms of viewing, this screen is up there with the best. 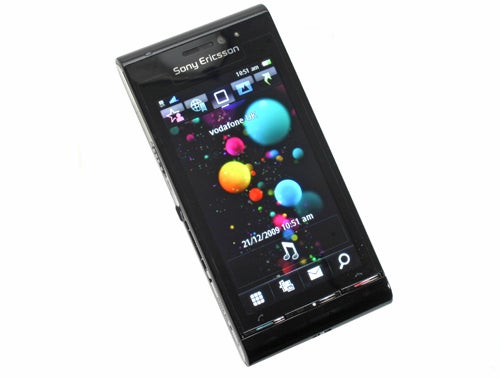 However, the touch-sensing isn’t exactly stellar. While reasonably sensitive for a resistive screen, the merest glance won’t be picked up as on capacitive devices. Along with a lack of multi-touch support, this is particularly noticeable when typing and severely slows you down. Things really aren’t helped by the operating system either.


While fairly functional, Symbian S60 just doesn’t cut it as a touch-screen operating system when compared to Android, iPhoneOS, and WebOS, especially on such a premium device. In particular the menus are inconsistent with some using lists and others using icons. Scrolling also requires the use of a side scroll bar, while the keyboards leave a lot to be desired in terms of layout. We also found the whole screen locking and button layout somewhat counterintuitive and we regularly closed apps when we meant to just go back a level in menus or locked the phone when we meant to unlock it, etc. Constant notifications that the phone was connecting to Wi-Fi also became very annoying.

While this is a pretty bad start, these complaints can be aimed at any version of S60 that we’ve used and Sony Ericsson has at least made a decent effort with its implementation. Instead of the single fixed desktop, as preferred by many Nokia phones that use S60, this phone has five that you can navigate between by sliding your finger across the screen or by pressing the links/tabs that run across the top. The middle, and default, tab is mostly blank except for quick launch buttons for the music player, dialler, multimedia interface, messages folder, and search function that run along the bottom. Swipe left and you get a list of web links, swipe left again and there’s a list of favourite contacts. Moving right and there’s a quick picture viewer that, thankfully, supports finger scrolling, while the far right tab is home to shortcuts for your favourite apps. All told this combination of desktops makes it relatively quick and easy to get where you need with minimum fuss. 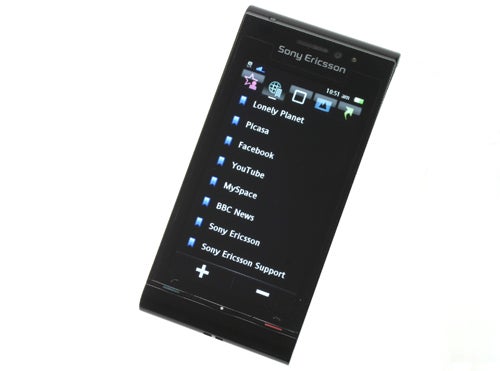 Another noteworthy addition SE has made is the multimedia interface. While it doesn’t quite have the same level of functionality as the PS3’s crossbar interface, which it is trying to imitate, it does make browsing through you media files quick and easy and looks quite pretty. Media playback is also better than many though there’s no support for DivX videos or music formats more exotic than MP3, WMA, and AAC. Videos up to 640 x 480 are supported in MPEG4 format, though, and they look great. 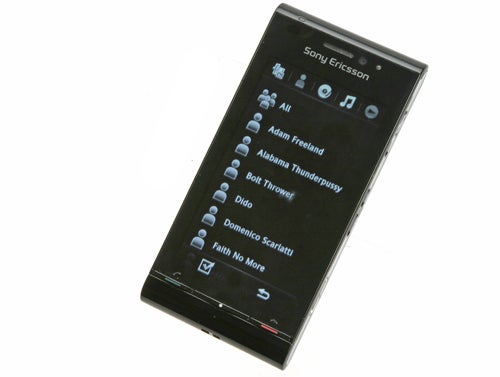 Speed is another thing this phone isn’t left wanting for. General navigation is snappy while more intensive tasks like browsing the web cause few problems. It’s certainly not on the level of top smartphones like the iPhone 3GS or Blackberry Bold 9700 but you should seldom find yourself hanging around. These things said, we did actually have a lot of problems when we first got the handset with it regularly crashing, slowing down, and just generally being unusable. So much so that I absolutely slated it in my original video review. However, within a few days these problems seemed to disappear and it’s been fine for several weeks now. As such we had to reshoot the video – ah the joy. 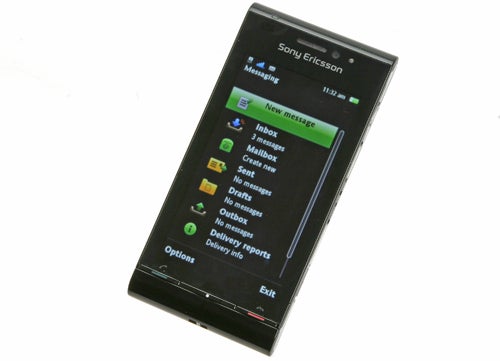 So speed isn’t a problem but functionality certainly is. The web browser, while fast and capable of showing full pages accurately, isn’t all that slick and email support is very basic with no support for push, scheduled retrieval or html display. There are few preinstalled applications either and no integrated app store. You can, however, download apps through the PlayNow portal and basics like Facebook (which is quite a decent little app) are free.

Of course, the biggest attraction with this phone is its camera and it certainly marks itself out from the crowd. It’s very quick in operation, starting up in around two seconds and taking three shots every 10 seconds. Without the flash and in good lighting results are sharp, detailed and generally well metered though close inspection shows nearly all shots are quite noisy regardless of lighting conditions. The flash, which has a range of least four metres, does a great good job in darker situations though. Video is only shot at 640 x 480 but runs at 30fps and is plenty good enough for casual clips. The LED lamp, along with the night mode also does an excellent job in the dark. 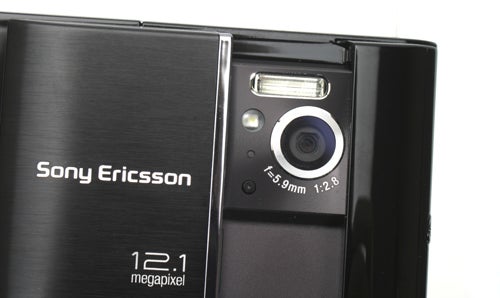 Features include touch focussing, panorama mode, bestpic (which takes nine photos in quick succession, albeit at a lower resolution, allowing you to pick out the best one), and smile detection. You can also adjust exposure and set the flash to red-eye reduction mode. You get eight scene modes including one for snow, which as you can see from our samples makes a big difference. All told this is easily equal to a basic dedicated compact camera and beats much of the phone competition hands down. 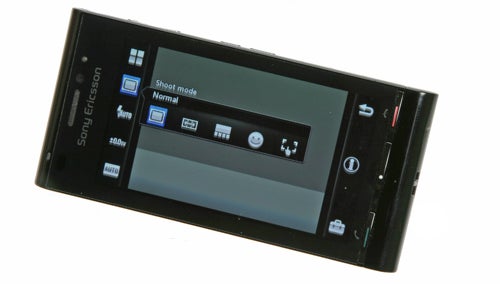 As a phone, the Satio is perfectly capable, providing good quality audio through to both listener and caller. We also had no problems with signal drop outs. As for battery life, it does drain fairly quickly if you’re regularly browsing the web, using the camera, and watching video but you should still get a couple of days out of it.


The Sony Ericsson Satio U1i is a very capable camera and multimedia phone. Its camera is among the best you can get on a phone and is certainly a rival to entry level dedicated compacts. Meanwhile the large screen makes for a great multimedia viewing platform. However, the clunky interface, below par build quality and basic email facilities severely dent its value. 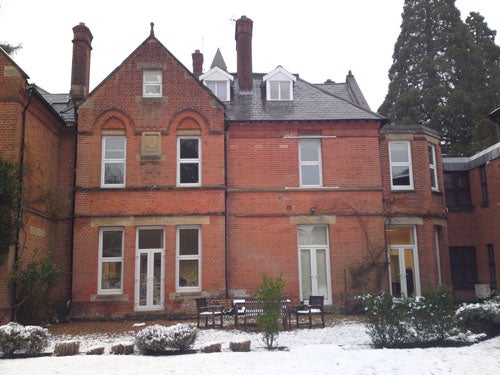 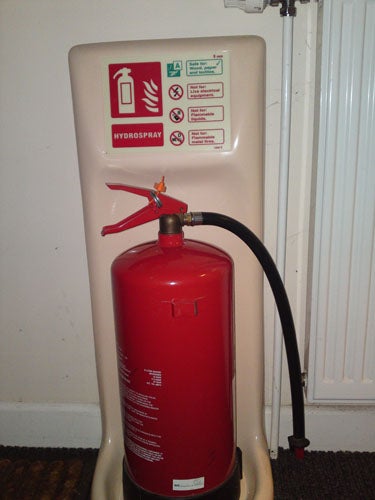 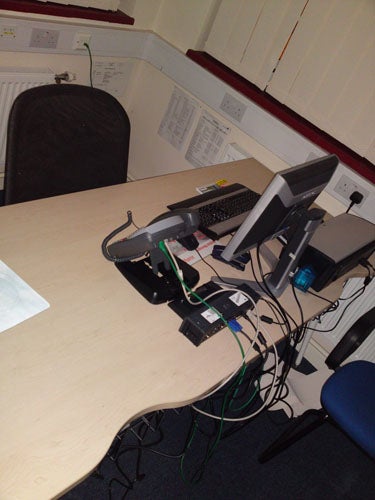 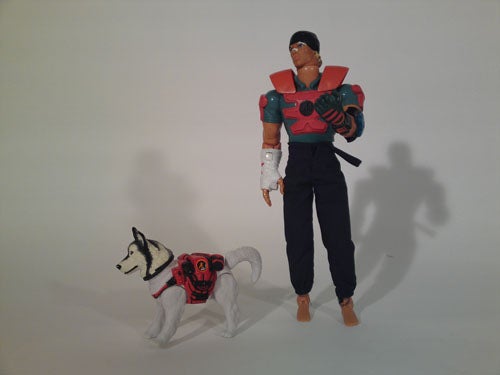 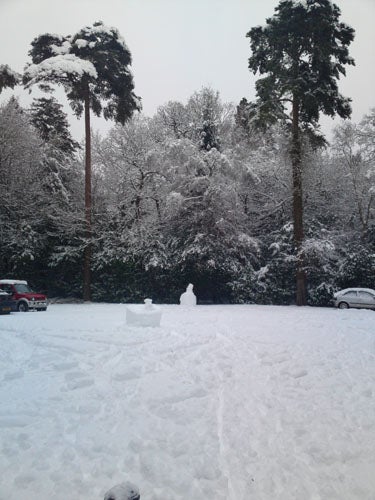 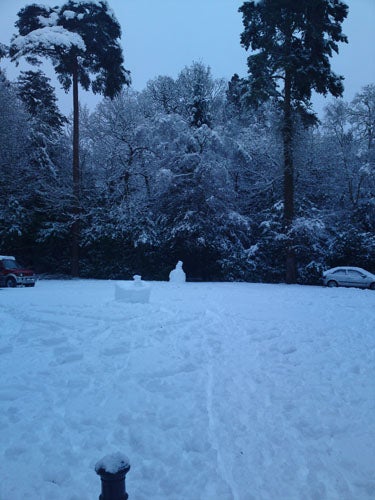