JVC may have pioneered hard disk-based camcorders for consumers, but Sony is now competing at full strength, with an even more substantial range of alternatives for both standard and high definition. The DCR-SR72E sits in the middle of the five standard definition hard disk-based camcorders Sony currently has available in the UK. Despite being really quite small, it still packs a 60GB hard disk on board, so has plenty of potential for the holiday-bound videomaker. But how does it fare against other HDD-based camcorders, and other formats? 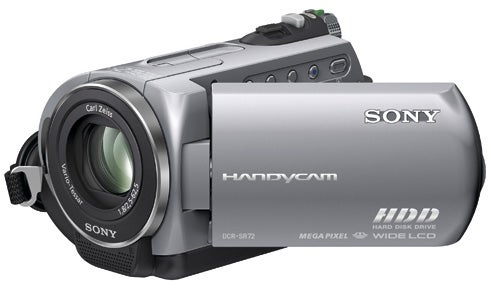 The SR72E is top of a trio of similar models, with the SR32E and SR52E beneath it, both of which only offer 30GB hard disks. The CMOS-based SR190E and 290E are aimed at a more premium market, with many more features. But before we delve deeper into the specifications the SR72E has in common with its lesser siblings, let’s pause to consider the primary feature which sets it apart – that 60GB hard disk. With AVCHD, this capacity would have been merely adequate, but for a camcorder recording MPEG-2 in standard definition (SD), it’s very capacious indeed. 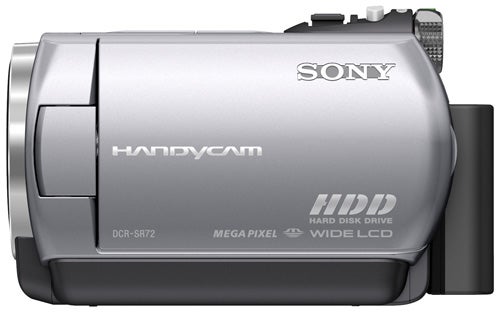 Even at the top HQ quality setting, you can record 880 minutes of video before having to clear out old clips. That’s 14 hours and 40 minutes of footage – more than most people will shoot even on quite a long holiday. Choose the lowest quality setting and the duration burgeons to over 41 hours. So if you need to record an entire Le Mans 24-hour endurance race non-stop with space to spare, the SR72E is the camcorder to choose.


In other respects, though, the SR72E is very much an entry-level device, and shares a lot with the cheaper SR52E. The CCD has the same 1.07 megapixel resolution (the SR32E’s is 800 kilopixel), and it’s only a 1/6in unit, which is about as tiny as they come in camcorders. A smaller sensor has a detrimental effect on low light performance, as its pixels are physically smaller so won’t pick up the same intensity. With just a single megapixel, the SR72E’s maximum still image size is only 1,152 x 864, too, which is far away from even budget digital cameras these days.

The SR72E is decidedly low-end in terms of features as well. It does offer an accessory shoe, but this is Sony’s proprietary version, so you’ll be restricted to Sony peripherals. Third-party ones won’t fit. No headphone or microphone jack is provided, either. The only camcorder-resident video connection is an all-in-one A/V connector, and that merely offers composite video output not S-video, plus RCA audio. The built-in lens cover is very convenient, though.


Virtually all manual controls are accessed through the 2.7in touch screen, with backlight compensation one of the few exceptions. Two types of manual focus are available – either via incrementing up and down using the onscreen buttons, or by touching the point on the viewfinder image to indicate the point you want spot focus to use for reference. Similarly, you can control exposure incrementally or touch the viewfinder image for spot exposure. Ten different Scene modes are available, including Twilight, Candle, Sunrise & Sunset, Fireworks, Landscape, Portrait, Spotlight, Sports, Beach and Snow. With so many on offer, you’ll probably rarely use some of them, if ever. 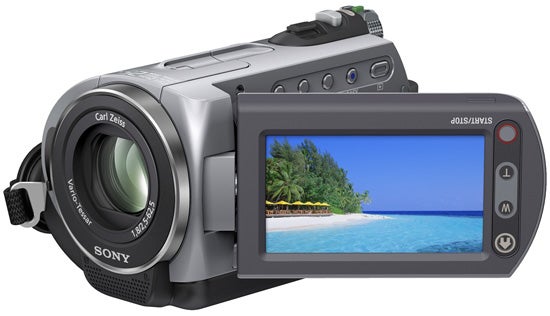 You can toggle a tele macro function, and three types of low light assistance. Colour Slow Shutter simply drops the shutter speed to allow more light in. Nightshot Plus has its own discrete button on the top of the camcorder. This fires up an infrared light source next to the lens and switches to monochromatic infrared sensing mode. Super Nightshot Plus then adds slower shutter speeds on top of this. Then there is a selection of digital effects, but we’re not a big fan of in-camera effects in these days of ubiquitous video editing software. You can add filters like Old Movie later with most editing apps, usually with much better end results.


After reviewing quite a few high definition camcorders recently, it would be easy for us to be unimpressed with the SR72’s video performance. The extra detail of HD makes SD look somewhat lacking in clarity by comparison. But the SR72 does exhibit Sony’s excellent capabilities with colour, at least in strong sunlight. The chromatic range is well saturated with a characteristic emphasis towards blue, which has been the company’s visual trademark for decades. However, quite a bit of noise is evident even with this level of lighting.

The SR72E’s 1/6in CCD is at the bottom of the scale when it comes to size, though, putting it in the same league as DV camcorders costing £200. The camcorder’s abilities in low light bear this out. In our test scenarios, the colours remained reasonably saturated in good artificial illumination (like a room lit by a single bright ceiling light), but the level of visible grain started to obscure fine detail. In less clement lighting, even the good saturation disappeared. So whilst the SR72E offers acceptable quality in sunlight, it’s not well suited to indoor shooting – something you may want to do a fair amount of with a camcorder intended for capturing general family memories.

However, the SR72E is convenient when it comes to working with the footage you’ve shot. Sony supplies a docking station in the box with power, A/V and USB connectivity built in. So you can leave this hooked up to your TV or computer and rapidly plop the camcorder on top when you want to watch or edit your recordings. The on-board hard disk shows up as an ordinary removable hard disk in Windows XP or Vista, and the video files are stored in MPG format, so will be readily editable by most popular apps – including the Vista version of Windows Movie Maker. We certainly had no problems with the software we tried, Premiere Elements 3 and Ulead VideoStudio 10 Plus.


If it weren’t for the rapidly decreasing price of high definition hard disk camcorders, the DCR-SR72E would still look like a bit of a bargain, despite its poor low light abilities. No other hard disk-based camcorders in this price range offer so much storage. However, now that AVCHD models are pushing well into the sub-£1,000 category, there’s less and less reason to opt for standard definition if you want a hard disk-based camcorder. The SR72E does store many minutes of video, but the level of video noise evident in virtually all lighting conditions would only be acceptable in a bargain-basement MiniDV camcorder, not in one where you’re paying a £200 premium for hard disk recording as well.