One thing about Sony you can always rely on is that it will always find its own way of doing things, usually flying in the face of industry standards. Remember Betamax video cassettes, or MiniDisc? Those were both Sony inventions. 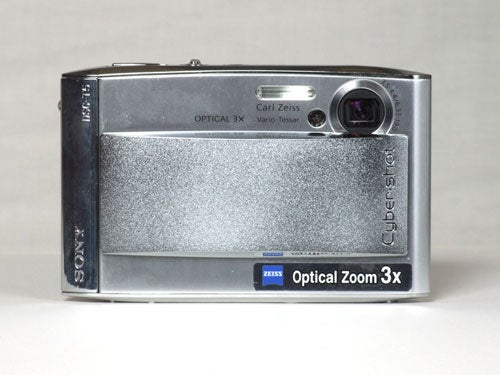 It’s the same with digital memory cards. Since I review a lot of different cameras and other gadgets, I have a large number of different kinds of memory cards. I have CompactFlash, SD, MMC, xD-Picture, and I’ve even still got a few old SmartMedia cards lying around somewhere. I also have a selection of MemorySticks for when I have to review Sony cameras, because of course Sony has to have a type of memory card that nobody else uses. So imagine my delight when I received the DSC-T5, and discovered that it won’t accept standard MemorySticks, only the smaller Memory Stick Duo. I don’t have any of those, and the camera does not come supplied with one, so I was only able to use the camera’s internal memory, enough for just 12 full-resolution shots.


The DSC-T5 is the latest in Sony’s line of ultra-slim snapshot cameras, and has a broadly similar specification to the other cameras in the T series, such as the T7, T33, T3 and others, since all of them have a 5MP sensor and 3x optical zoom lens. It is certainly an attractively designed camera, and at just 20.3mm thick and 139g including battery and card it is one of the skinniest and lightest cameras on the market. It can slip into a shirt pocket with barely a bulge, making it ideal for social occasions. Priced at around £210 online, or £279.99 in the High Street, it is competing with the likes of the Pentax Optio S5n, the Canon IXUS 55 and the Olympus FE-5500. 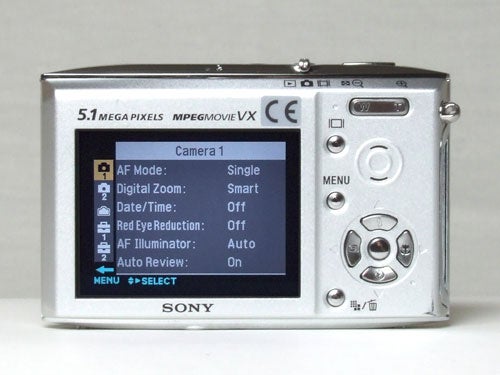 For the most part the T5 is a well-made camera, with a durable metal body and a rounded shape that gives it an inherent strength. In keeping with its role as a simple snapshot camera the controls are kept to a minimum, and are sensibly laid out. The rear panel is dominated by a big 2.5in LCD monitor, which with a resolution of 230,400 pixels is one of the sharpest I’ve seen on any camera.

Like many pocket cameras the T5 has a sliding lens cover which also doubles as an on/off switch, and in my opinion this is something of a weak point. The cover is made of plastic, and feels quite flimsy and insecurely attached. For some reason it also has a separate power switch on the top panel.


Also on the top panel is the camera’s other weak point, a small protruding switch that selects between shooting, playback and movie mode. This switch appears to be made of plastic and feels decidedly flimsy, and is ideally shaped to catch on pocket linings and loose threads. 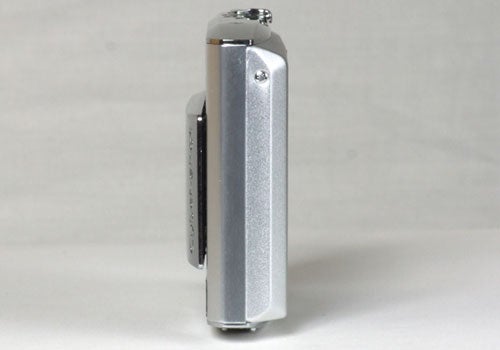 The overall design, with the lens positioned in the top right corner of the front panel, carries with it the usual problem of fingers getting in the way of your pictures, and also getting greasy fingerprints on the lens. Anyone used to a more conventional body design may find this to be a problem until they get used to handling this camera.


Only macro mode, flash mode, self timer and instant playback have their own button controls. All the T5’s other functions are controlled via the menu, including a long list of shooting modes. Unfortunately these modes are only identified by small icons, and nowhere in either the superfluous “Read This First” guide or in the exceptionally badly written and confusing manual could I find any explanation of what these icons represent. Some are fairly obvious; a little figure with what appears to be either a golf club or a hockey stick presumably represents sports/action mode, while the usual cartoon mountains indicate landscape mode. However the icon depicting two figures, one black and one white, is a complete mystery, as is the magnifying glass inside square brackets. If you can figure these out then you’ve got 10 different picture modes to choose from, including fireworks, snow, beach and night portrait. 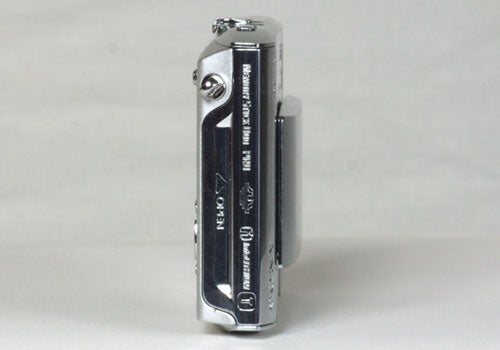 In fact, despite its snapshot-camera credentials, the T5 does offer a surprising amount of versatility. Menu options include three auto-focus options, as well as manual focus, three metering modes, auto exposure bracketing, adjustable flash output and multi-exposure burst mode. Not all of these are available in every shooting mode, so reading the manual is a necessary chore. Playback mode offers the option to re-size and rotate images, as well as viewing them as a slideshow, while movie clips can be edited in-camera.

Sony cameras have always had above average performance. Start-up time for the T5 is a respectable one second, thanks to the non-extending zoom lens, and in burst mode it can fire off five frames in around 3.5 seconds, although after nine shots there is a fairly lengthy wait while the image buffer empties itself into the storage medium. 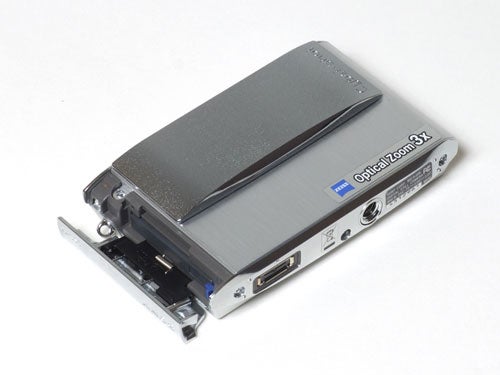 The T5 also has a very good movie mode, although you’d never know it from reading the manual, nor from Sony’s pretty but inaccurate and relatively uninformative website. In fact it can shoot at 640 x 480 resolution and 30 frames per second with audio, although this is only available when using a Memory Stick PRO Duo card.


The T5 has a nice if rather slow F3.5 – F4.4 Carl Zeiss lens, with a zoom range of 6.3 – 19.0mm, equivalent to 38 – 114mm. It also has a large 1/2.5in SuperHAD sensor, so in theory it should produce excellent results. However something has gone wrong somewhere because the image quality is disappointingly low. Colour rendition is seldom accurate and generally under saturated even in good light, the noise reduction and sharpening process reduces all fine detail to a homogenous blur, and even so image noise is present even in low-ISO shots. 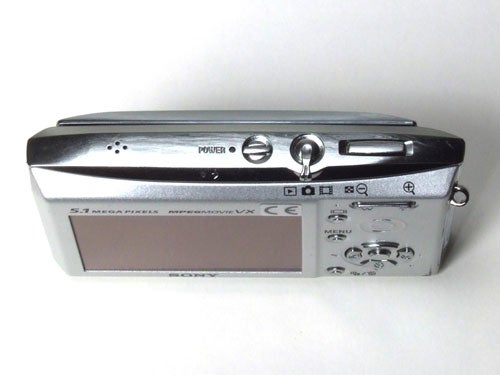 High-contrast edges have some of the worst purple fringing I’ve seen since about 2002, the lens produces severe and uneven barrel distortion and flash coverage is insufficient at wide angle, with a distinct bright spot in the middle of the frame. All in all, not too good. It’s a shame, because I really wanted to like this pretty little camera. It has style, specification and performance, but with such low image quality I cannot really recommend it when there are better cameras on the market for less money.


Ultra-slim design and a good array of options cannot compensate for very low picture quality. Image noise, over-processing, lens distortion and purple fringing all conspire to ruin what could have been a nice little snapshot camera. Add in questionable handling and some flimsy components and it’s game over for the DSC-T5. 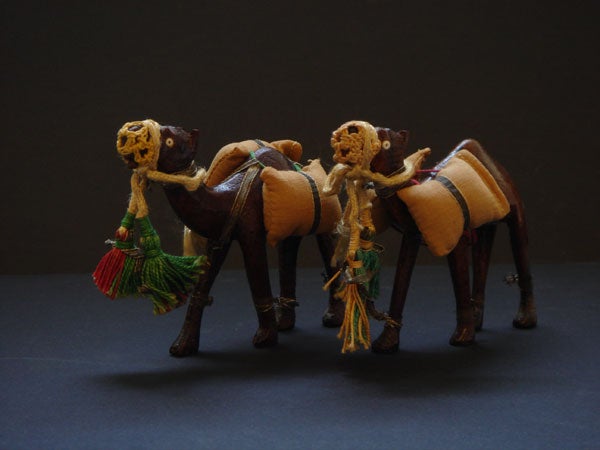 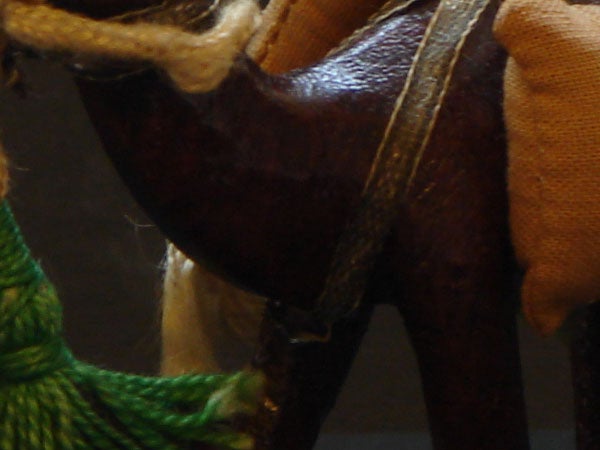 At the minimum setting of 64 ISO, although the image is reasonably smooth there is some visible colour distortion in the darker areas of this shot. Not a good sign. 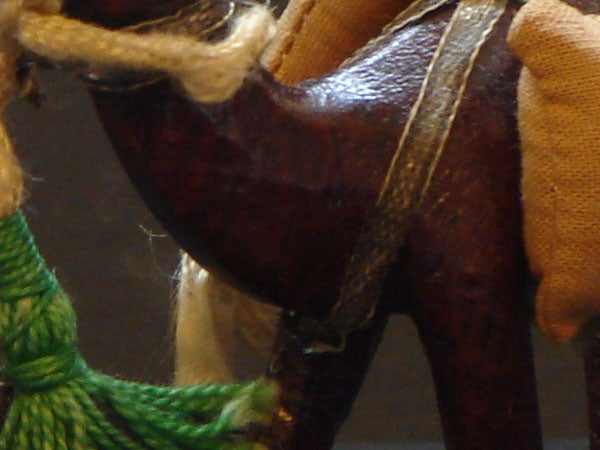 At 100 ISO there are speckled patches of colour distortion clearly visible. The exposure is also noticeably lighter than the previous shot. 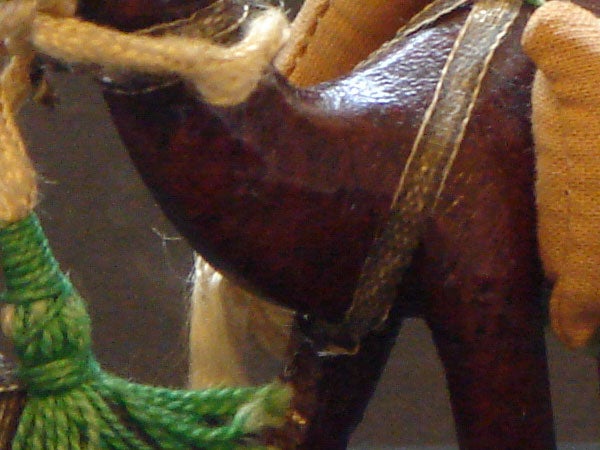 At 200 ISO there is image noise all over the shot and colours are heavily speckled and distorted. A very poor performance at this speed. 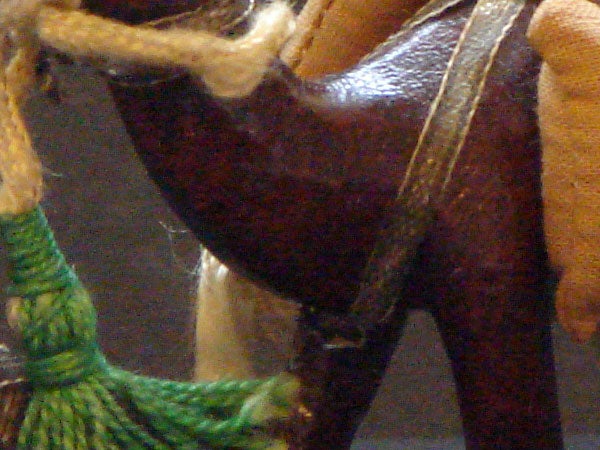 At 400 ISO there is so much image noise and colour distortion that the image is effectively unusable. It is almost impossible to tell what colour the background is supposed to be. 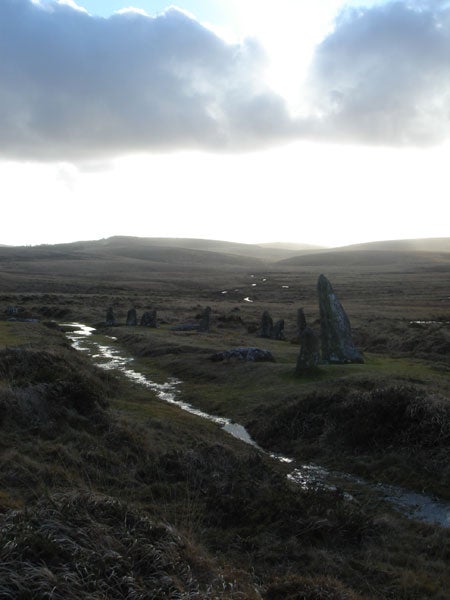 In this high-contrast shot the image processing engine has struggled to cope, and failed. There is image noise visible, colours are washed out, detail has been lost to over-processing and there is fringing visible on high contrast edges. 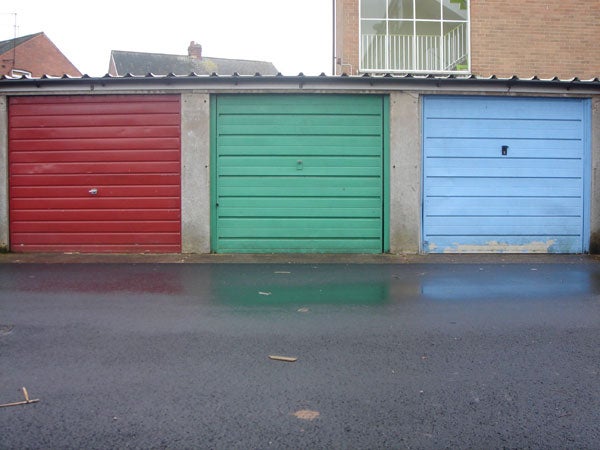 The roof in this wide-angle shot should be straight and level, but heavy barrel distortion has given it a distinct curve. The slight haziness in the top left is caused by a finger mark on the lens, a recurring handling problem with this camera. 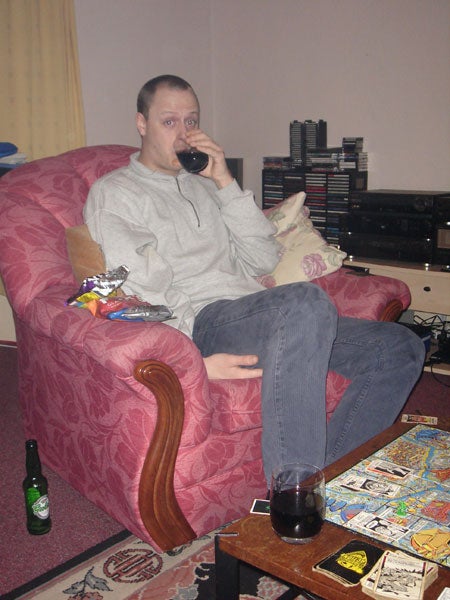 The middle of this indoor flash shot is noticeably brighter than the outside edge, although the total flash range is quite good. 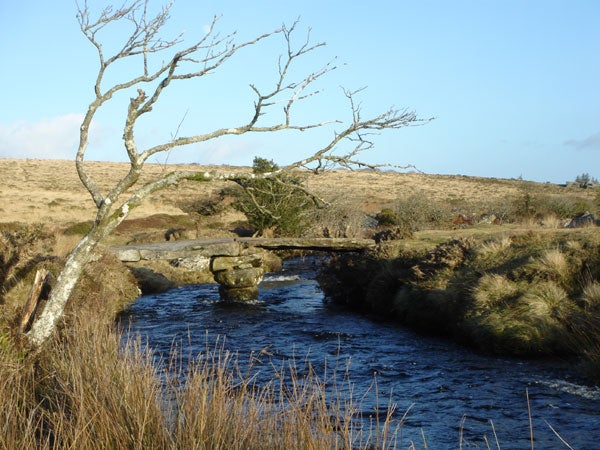 Shot in ideal conditions – clear day, bright sunlight, camera on a tripod – this picture should be perfect. It’s not bad, but over-sharpening has destroyed a lot of fine detail, and there is some fringing on the tree branches. 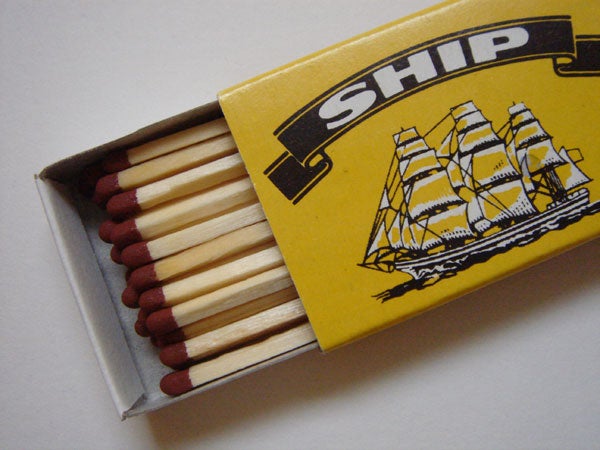 The T5 has a macro range of 1cm, but at that range the shadow of the camera is usually in the shot. 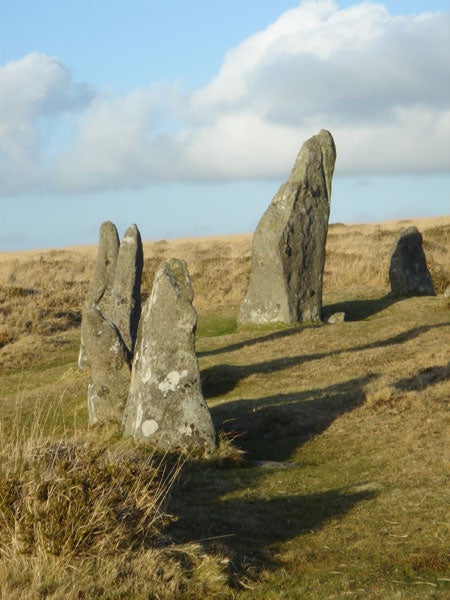 The 3x optical zoom lens has a telephoto end equivalent to 114mm. It’s not exactly the Hubble telescope, but it was enough to take this shot, which was the best one I managed to take with this camera. 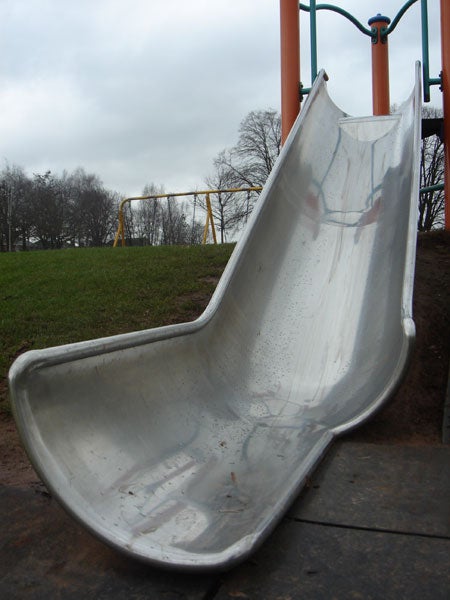 The wide-angle end of the lens is only 38mm, not especially wide at all. Still, with the big LCD monitor making accurate framing easy, you can mange some striking shots.