With competition at the quality end of the projection market getting ever more fierce, Sony’s VPL-VW80 arrives at a crucial time for the brand’s exclusive SXRD technology. For with a pretty high estimated retail price of £4,995, it’s going to have to go some to make its mark against much cheaper high-spec DLP models like the InFocus IN82 and IN83, or JVC D-ILA models like the HD1 and HD100, not to mention JVC’s imminent new D-ILA models, the HD350 and HD750.


It’s just as well, then, that the VW80 gives a very good account of itself on the specification front – especially with its inclusion of the intriguing high-end MotionFlow processing first discovered on Sony’s flagship (not counting the stupid money and now aging Qualia 004) VPL-VW200 projector.


MotionFlow on the VW80 comprises two elements, both individually adjustable within the onscreen menus: Film Projection, and Motion Enhancement. Of these the latter is the most straightforward, as at heart it’s simply Sony’s take on the idea of inserting extra, newly calculated frames of image data to make movement in the picture look more fluid and sharp. 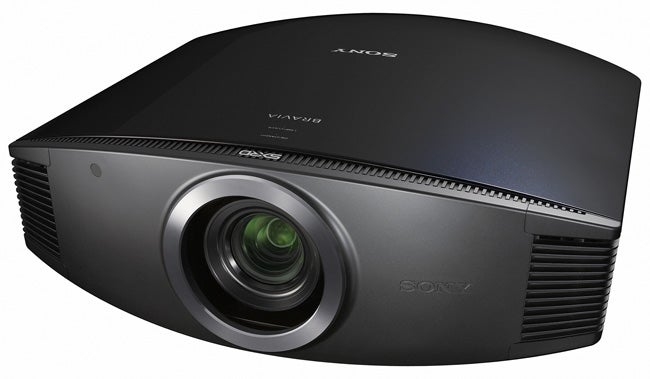 Film Projection is much less straightforward, but by and large what it tries to do is insert blank, dark frames of image data in a bid to recreate the sensation of watching a film in the cinema. In doing so it boosts contrast and, interestingly, reduces the appearance of judder, since it gives your eyes time to blend one frame into the next.


Also good to find is Sony’s Real Colour Processing, a remarkably sophisticated toolkit for fine-tuning colours to within an inch of their lives. The way it works is by letting you adjust the red, green, blue, yellow, magenta and cyan colour elements in the picture on an individual basis, using an adjustable ‘pie-chart’ interface that allows you to expand a particular colour’s range and/or position in the colour spectrum.


While you’re using it, this system cunningly knocks out of the image you’re watching every other colour than the one you’re trying to adjust. And so if you’re tweaking the red element, the picture is black and white except for where there’s a red element in the picture. This may look rather creepy at times, but it’s a truly inspired way of allowing you to see precisely what impact your adjustments are having.


We should say that we don’t recommend messing about with RCP unless you’re pretty confident about what you’re doing, but that doesn’t make it any less worthwhile as a feature.

Sony’s imaginative approach to user interfaces can be seen, too, with the MPEG noise reduction system the VW80 carries. For this allows you to pick your preferred block noise and mosquito noise combination by shifting a point along a ‘graph’ where Block NR runs along the horizontal axis and Mosquito noise runs up the vertical axis. The beauty of this system is that it lets you pinpoint much more accurately the setting where either or both noise reduction routines go from aiding to actually spoiling the picture.


Yet more impressively high-tech fine-tuning comes from an electronic panel alignment feature that enables you to achieve a perfect alignment of the red, green and blue elements within each pixel.


And then there’s the VW80’s ‘Advanced Iris’ system, which can automatically adjust the amount of light let through the projector’s iris in response to how dark or bright a particular image is, thereby making black levels more convincing and expanding the possible contrast range. Thanks to this dynamic iris, the VW80 claims a prodigious contrast ratio of 60,000:1 – so far as we can recall, the highest such figure we’ve seen on a projector to date. Not forgetting, of course, that it’s not a ‘native’ figure, but one that depends on reducing and increasing the image’s brightness.

A particularly nice thing about this dynamic iris is the flexibility Sony has apportioned to it. For as well as being able to select between two levels of ‘aggression’ for the system in terms of how much brightness it cuts out, you can also adjust the speed of the iris’s reaction time to slow, fast or ‘recommended’; set the iris manually; or even turn off iris control completely.


Yet more black level support comes from the option to run the projector’s lamp at a low output level, and from a black level boosting circuit tucked away in one of the many well-presented onscreen menus.


And still we’re not done with the VW80’s picture features. For also onboard are an anamorphic zoom mode for people with anamorphic lenses, Sony’s 24p True Cinema system (via the two provided HDMIs) for purer playback of Blu-ray’s 1080p/24 format, and Bravia Engine 2. This latter proprietary Sony system uses eight-stage, real-time processing to enhance various aspects of the picture, but especially colours and noise levels.


The remarkably long raft of features we’ve just trawled through come on top, meanwhile, of the increasingly inevitable Full HD pixel count, as well as an All-Resolution Crisp Focus lens designed to optimise resolution and focus.

And so to the moment of truth. Do all these features and fine specs justify the VW80’s £4,995 price tag? Actually, we’re not entirely sure they do.


Let’s start with the good news, though. For as usual with SXRD technology, the first thing you notice with the VW80 when watching HD is how remarkably sharp and detailed pictures look. It does full justice, for instance, to the immaculate Blu-ray transfer of ”No Country For Old Men”, portraying the iconic Texan landscape with outstanding clarity and three-dimensionality, while also creating a greater sense of immediacy and connection with closer subjects such as – gulp – Javier Bardem’s truly terrifying hitman. It’s weird how much more menacing those dead-fish eyes become when you can see them more clearly!


As usual, the extremely small pixel pitch of the SXRD chipset means that all this lovely detail is delivered without the slightest trace of visible pixellation in the image, even with our noses pretty much pressed up against our 120in screen. 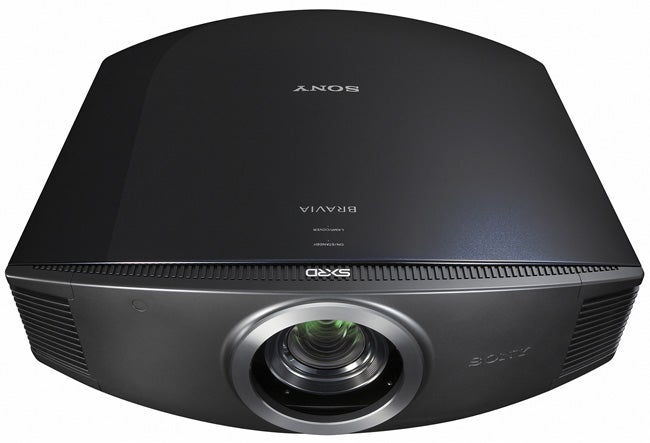 The VW80’s fast 2.5ms response time helps the sensation of clarity too, as rapid motion only suffers very slightly with blurring. And you can even get rid of this if you call in the MotionFlow Motion Enhancement mode.


However, I’m not sure I’d advise you to do this. For during our tests I found the Motion Enhancement system caused the picture to glitch and shimmer at times as the processing struggles to keep up with the sheer amount of motion it’s having to deal with.


Getting back to the good stuff, the VW80’s colours are much better than we’re accustomed to seeing on all SXRD projectors bar the Xenon lamp-carrying VW200. After some gentle tweaking of the red and magenta levels in the Real Colour Processing menus to stop skin tones looking orangey, colour tones look generally natural and exceptionally subtle in terms of blends and tonal shifts.


The VW80 deserves major Kudos, too, for its black level response. To my eye this even outperforms the black level of the flagship VW200, in terms of both raw black level depth and the stability of dark areas. Not surprisingly, this helps the VW80 produce dark scenes such as the one where ”No Country For Old Men’s” Llewelyn waits in his hotel room for the assassin to come to his door with superb authority, authenticity and scale.


For the record, we achieved the most natural black level response from the VW80 with the Advanced Iris set to Auto 1, and the Film Projection option set to Mode 2.

Regular readers might – if they’re really scary! – remember that I wasn’t a fan of the Film Projection-like modes on Sony’s high-end VPL-VW200 projector. But curiously they seem to work more effectively on the VW80 – possibly because the image isn’t as innately rich and bright, and so doesn’t tend to exaggerate the inevitable flicker that accompanies the insertion of ‘blank’ frames.


The Film Projection modes are still a matter of taste, I suspect, but I’d certainly recommend you at least experiment with them on the VW80, as they can, as billed, reduce the impression of motion blur as well as boosting black levels.


In fact, I should probably take this argument further, to stress that you should try and audition the Film Projection modes in action before you buy a VW80. For their effect appear so critical a part of explaining the VW80’s price that your reaction to them really has to be a major part of your buying decision. 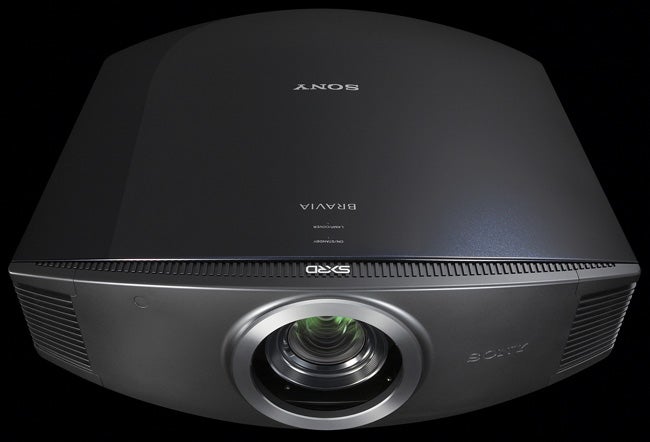 Yet more good news concerns the way the VW80’s unexpectedly large, really rather lovely gloss-black body soaks up noise from the projector’s cooling fans, especially if you follow our lead and have the lamp set to its black-level boosting Low mode.


While the VW80 delivers some noticeable steps forward for SXRD technology, though, we did also feel that in a couple of areas it fails to deliver the goods quite as brilliantly as we’d hoped given its cost.


For instance, when there’s a picture containing quite a mix of bright and dark material, black levels can suddenly look a touch washed out and flat, possibly as the advanced iris system struggles to pick the right brightness ‘pitch’ for such a mixed image. Also, while colours are actually clearly more vibrant and fulsomely saturated than those seen on previous cheap SXRD models, they still to my eyes fall a little short of the aggressive dynamism possible with the best DLP technology.


The VW80 is an excellent projector in itself, introducing Sony’s fascinating MotionFlow system to a lower price point, delivering SXRD’s best black levels yet, and reaffirming SXRD’s prowess in the sharpness and lack of video noise departments.


Whether it truly justifies its £5k price tag, though, is another matter. It largely depends on just how much store you put in its MotionFlow system, to which end I strongly recommend that you try one before you buy one. For me personally, while MotionFlow has certainly grown on me since I first saw it, it doesn’t quite do enough – especially with the flawed Motion Compensation element – to persuade me that the VW80 is genuinely £2,000 better than, say, the JVC HD1.