In recent reviews of TVs boasting Sony’s new Monolithic design, we’ve bemoaned the fact that the design’s potential impact and purity has been reduced by surprisingly chunky rear ends. So the KDL-46NX703 comes as a breath of fresh air, using as it does edge LED backlighting to be much more slender than the other models we’ve seen.


We’re not talking Samsung levels of skinniness here; the bottom third of the set sticks out more than 60mm. But it’s slender enough to finally truly deliver a monolithic profile. Especially if you stump up extra cash for Sony’s striking and innovative new silver speaker bar/desktop stand combi, within which you can tilt the screen gently back for extra visual impact and viewing pleasure. 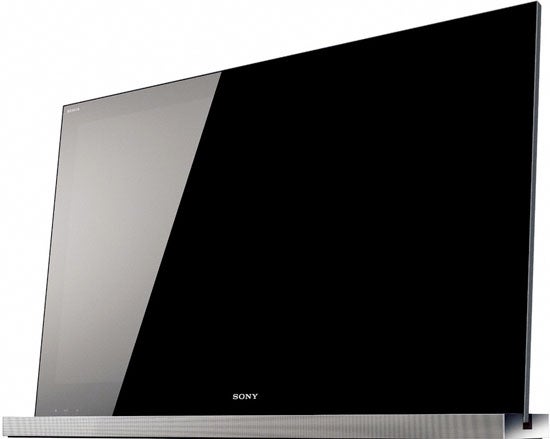 Unexpectedly, our 46NX703 review sample arrived clad in a white bezel rather than the black sported by the other Monolithic screens we’ve seen. This will doubtless help the set find a place on the background set of ”This Morning”, and we liked the way the white was offset by the silver enclosure running around the bezel’s extremities. But personally, we prefer the less ‘fancy’ black version. Though obviously it’s always nice to have a choice.


The 46NX703 resides within the Network series of Sony’s new Bravia range, and so it’s no surprise to find it bristling with connections. Four HDMIs – two on the rear, two down the side – lead the way, but there’s extensive multimedia support from a D-Sub PC jack, an Ethernet port, and a USB socket. Even better, unlike other recent Sony TVs, the 46NX703 boasts built-in Wi-Fi support rather than forcing you to cough up for an optional extra USB Wi-Fi dongle. 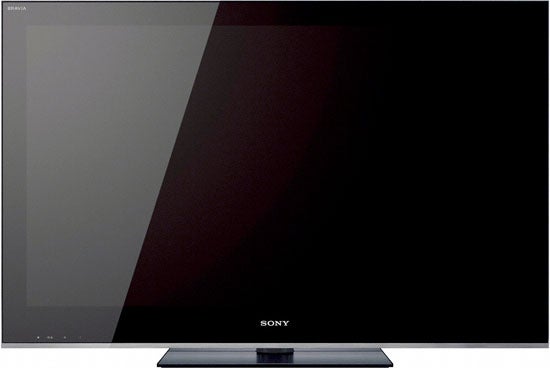 This leaves the USB port free to do multimedia duties, playing photo, music and video files from USB storage devices. It also makes the provision of just one USB input easier to take than it has been on Sony sets where you do have to use a Wi-Fi USB dongle.


The set’s network connectivity is there, too, to support its built-in Freeview HD tuner; to access files on DLNA PCs; and to stream video from Sony’s truly impressive ‘Bravia Internet Video’ roster of online content.


We’ve covered this new online offering in detail in previous reviews, so we won’t spend too long on it now. Suffice it to say that the list of content providers is huge, startlingly – almost eccentrically! – varied, and delivered with both quality and stability for the most part. Highlights include Channel 5’s Demand Five catchup service, Eurosport, YouTube, and best of all, LoveFilm, complete with syncing to your LoveFilm account.


The 46NX703 has plenty of picture processing tricks up its sleeve, too. Particularly noteworthy is its carriage of Motionflow 100Hz – something conspicuously absent from the 32NX503 Sony Network TV we tested recently. But you also get Sony’s Live Colour system and, of course, Sony’s usually dependable Bravia Engine 3 system.

In fine-tuning the pictures, we couldn’t help but think that a £1,700 46in TV could have run to a proper colour management system. Especially as this might have enabled Sony to seek an endorsement from the Imaging Science Foundation (ISF). But the 46NX703 is colour management free.


Before we sound too negative about the options the 46NX703 has to offer, though, there are actually some interesting things tucked away in an Advanced Settings submenu, including black boosters, white balance settings, and the facility to adjust the set’s Motionflow and Film Mode processing. 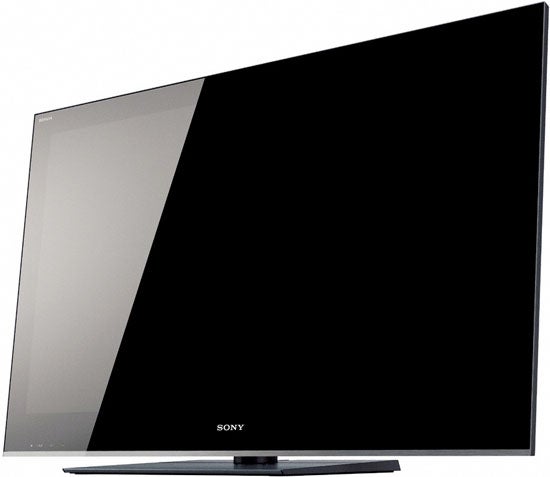 Accessing all the 46NX703’s features is a bit of an aggravation in our opinion, for two reasons. First, the heart of the very attractive and comfortable remote control comprises two concentric circles of important, regularly used buttons. Yet this concentric circle configuration led to us accidentally pressing an incorrect button time after time after time. Grr.


The other issue is the TV’s onscreen menus. For while their unusual dual-axis design works with relatively uncomplicated TVs, for us it starts to get rather convoluted and confusing when there are as many features to sort through as the 46NX703 has. It doesn’t help, either, that choosing some options – including basic picture adjustments – causes a noticeable delay before the TV responds to your selection.


The 46NX703 is the first mainstream edge LED-lit LCD TV we’ve seen from Sony (the stupid-money 40ZX1 doesn’t count!), so we couldn’t help but have concerns over how well it might perform. But happily it quickly sets about putting the vast majority of these concerns to bed. 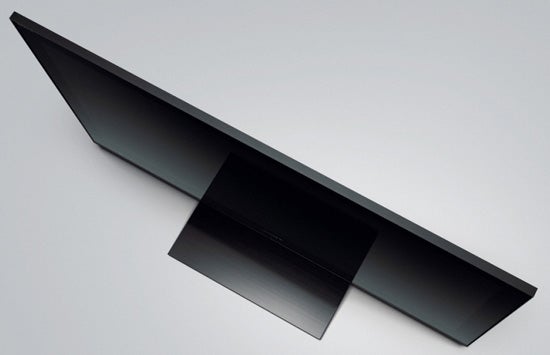 Particularly pleasing given some previous Sony failings in that department are the 46NX703’s black levels. The screen can produce one of the deepest black colours we’ve seen on an edge LED TV, providing a great foundation against which the image’s actually very bright and fully saturated flavour can shine.


There’s not quite as much shadow detail in dark areas as you get with Samsung’s lighter C8000 sets, but then the C8000s can leave black colours looking a little grey. On balance, we felt that we preferred the Sony approach.


It’s a huge relief, too, to find dark scenes only very faintly tainted on the 46NX703 by backlight inconsistencies – at least once you’ve done the sensible thing and reduced the set’s brightness and contrast from their over-high preset levels.


We’re not saying there are no patches of clouding, mind you – just that the cloudy bits are so subtle as to be invisible during the vast majority of your viewing. And even when you do see them, they’re only marginally distracting.

The 46NX703 excels with its colour palette as well. For a start, its colour range is unusually expansive, helping it paint pictures with a deftly natural touch. Especially as the range of colour tones available is joined by some excellent blend subtlety.


There’s none of the slightly washed out look to colours noted on Sony’s 32NX503 either. On the contrary, the 46NX703’s colours display resplendent levels of vibrancy and richness, yet this combines with the range of tone noted earlier to ensure that the vibrancy never starts to make ‘real’ video look like a Disney cartoon.


Elsewhere, motion is pleasingly handled by the Motionflow system, smoothing away judder and enhancing motion detail without chucking up many nasty side effects – provided you only use its Standard rather than high setting, at any rate. There is a little residual blur to be seen over standard definition pictures, but it’s not serious and so becomes something you almost tune out over time. 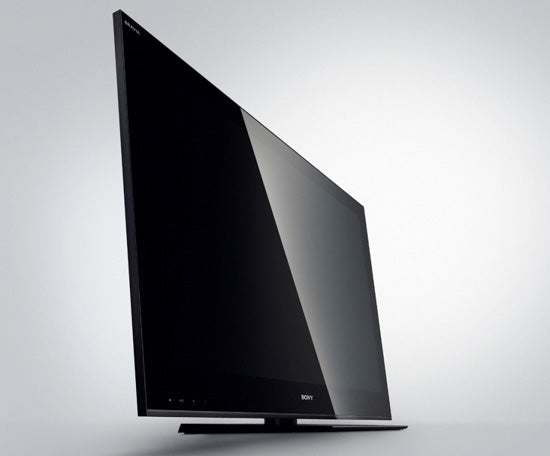 Aside from the minor motion blur, the 46NX703’s standard definition pictures are actually very good thanks to Bravia Engine 3’s upscaling capabilities, with natural colours and impressive noise suppression.


The only thing about the 46NX703’s pictures that might give some of our readers pause for thought – aside from an inevitably fairly limited viewing angle – is that they’re not as crisp as some rivals when showing HD footage.


As is usually the case with very slim TVs, the 46NX703’s audio isn’t in the same quality league as its pictures. It’s open and powerful enough to deliver voices and treble detailing with a degree of authenticity, making it perfectly workable with normal, undemanding TV fare. But bass sounds trapped and unconvincing, leaving busy film soundstages feeling thin and lopsided.


With its catwalk looks, outstanding pictures and exemplary multimedia talents, the 46NX703 is definitely one of Sony’s finest hours. Even so, we briefly toyed with not giving it a Recommended award on account of its rather steep £1,700 price. But then we took into account its 5-year warranty, and the fact that you can knock £150 off the price by trading in any old piece of TV tat you might have lying around your house, and thus decided that all was well with the 46NX703’s world after all.